Joan Hartmann’s re-election campaign is heading into the home stretch.

The Santa Barbara County 3rd District supervisor is hoping to win her second term when voters go to the polls Tuesday, March 3.

“I used to be a marathon runner,” Hartmann said Saturday as she rallied her troops. “This election is a marathon. We’re at the 20-mile mark and today we’re beginning our final push.”

Having served as the 3rd District representative on the County Planning Commission, Hartmann was first elected to the board in 2016 after Doreen Farr announced her retirement.

With four candidates in the running this time, Hartmann could win re-election during the primary if she receives 50 percent of the vote plus one.

If she doesn’t, the top two vote-getters will square off in November.

On Saturday, Hartmann and 18 supporters met at the Santa Maria Democratic Headquarters before heading off to Tanglewood.

“We walk, knock and talk with purpose,” said Hartmann. “Today we’re taking our grass-roots efforts to Tanglewood. We’re going door-to-door to get our message out.”

“I grew up in Tanglewood and my father still lives there,” said Ken Dahmen, a Santa Maria High School graduate and a program manager for a local nonprofit organization. “I already did some canvassing this morning.

“Until Joan was elected, I think the North County, including Tanglewood, was underrepresented. She’s been doing a great job. We’d like to keep her in her supervisor’s position so she can do more.”

The 3rd Supervisorial District is the county’s largest geographically; stretching from Isla Vista and the UCSB community in the south to the Santa Ynez Valley and then west to Mission Hills and Vandenberg Village, the western part of Lompoc and up to Guadalupe and Tanglewood.

It is also considered the most socioeconomically diverse.

Hartmann has a long career in public service.

After earning a doctorate and later a law degree, she taught environmental policy and law before going to work for a number of government agencies — Department of the Interior, Environmental Protection Agency, the California Coastal Conservancy.

She continues that work as a supervisor.

Photos: Joan Hartmann's Board of Supervisors re-election campaign heads into the home stretch

“People don’t realize that although we only meet [as a board] on Tuesdays, being a supervisor is more than a full-time job," she continued.

"We all serve on at least 10 committees and we have committee meetings, local office hours throughout the county and attend numerous community events."

The office is nonpartisan, so candidates' party affiliations are not listed on the ballot.

“Still, many of us are endorsed by parties, and the parties will work for us in our election campaigns,” Hartmann said. “I’m a proud Democrat. My [main] opponent, Bruce Porter, won’t say it, but he’s a Republican. He has all that Republican money, but we have the people.”

Three years into her first term, Hartmann also has an official record upon which to run.

“Our county is doing well,” Hartmann said. “Our budget is in the best shape since before the crash of 2008, and we’re working on all kinds of creative initiatives; renewable energy, a recreation master plan including expanding parks and trails to underserved parts of the county, making our county government more responsive to the people; we’re targeting improving economic vitality, addressing the homeless problem. We’re rolling up our sleeves and getting the important work done. 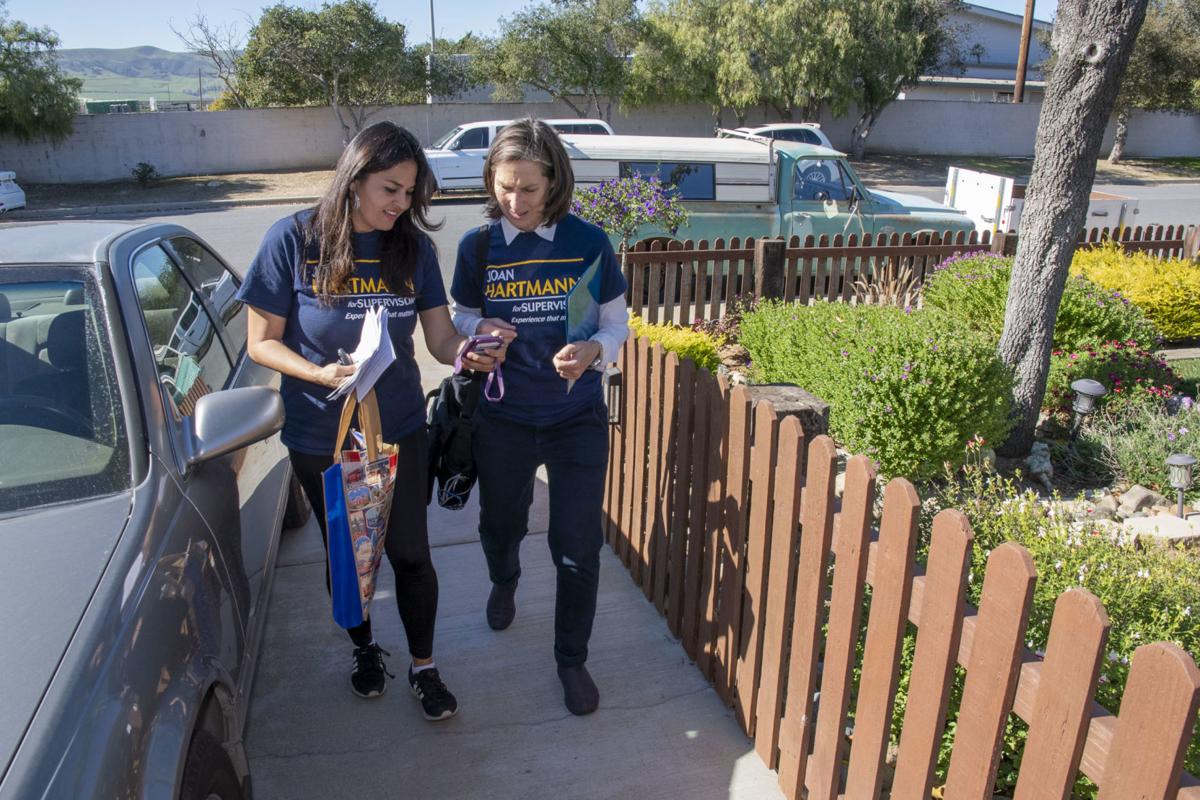 Joan Hartmann, right, Santa Barbara County 3rd District supervisor, walks up a driveway in the Tanglewood area Saturday with her campaign coordinator, Alma Hernandez, as Hartmann and her supporters continued their grass-roots re-election effort. The primary will be held Tuesday, March 3. 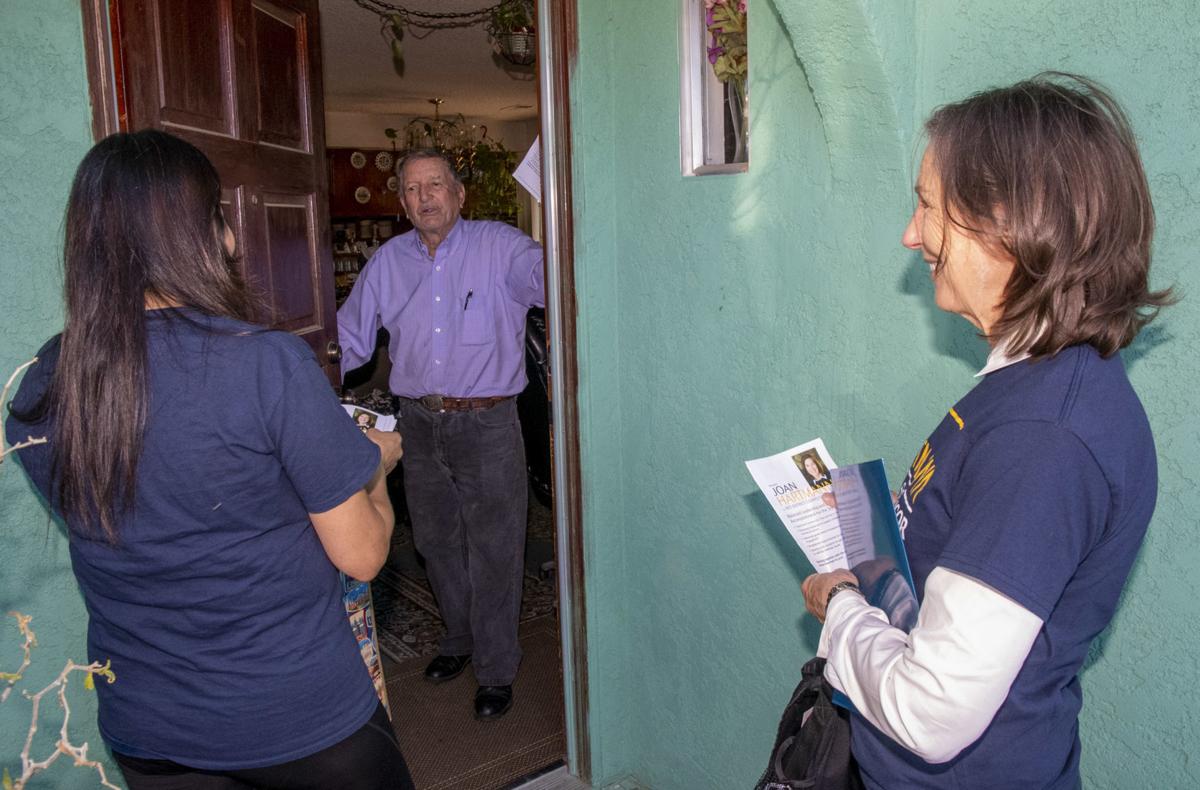 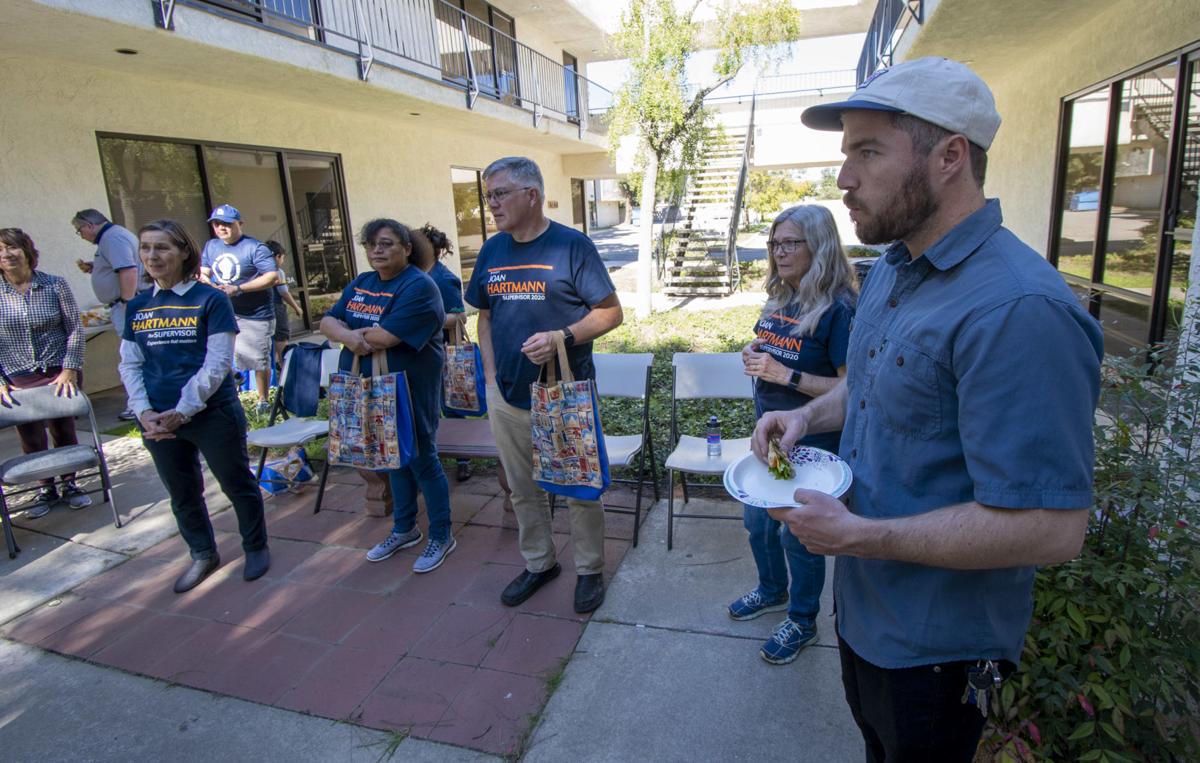 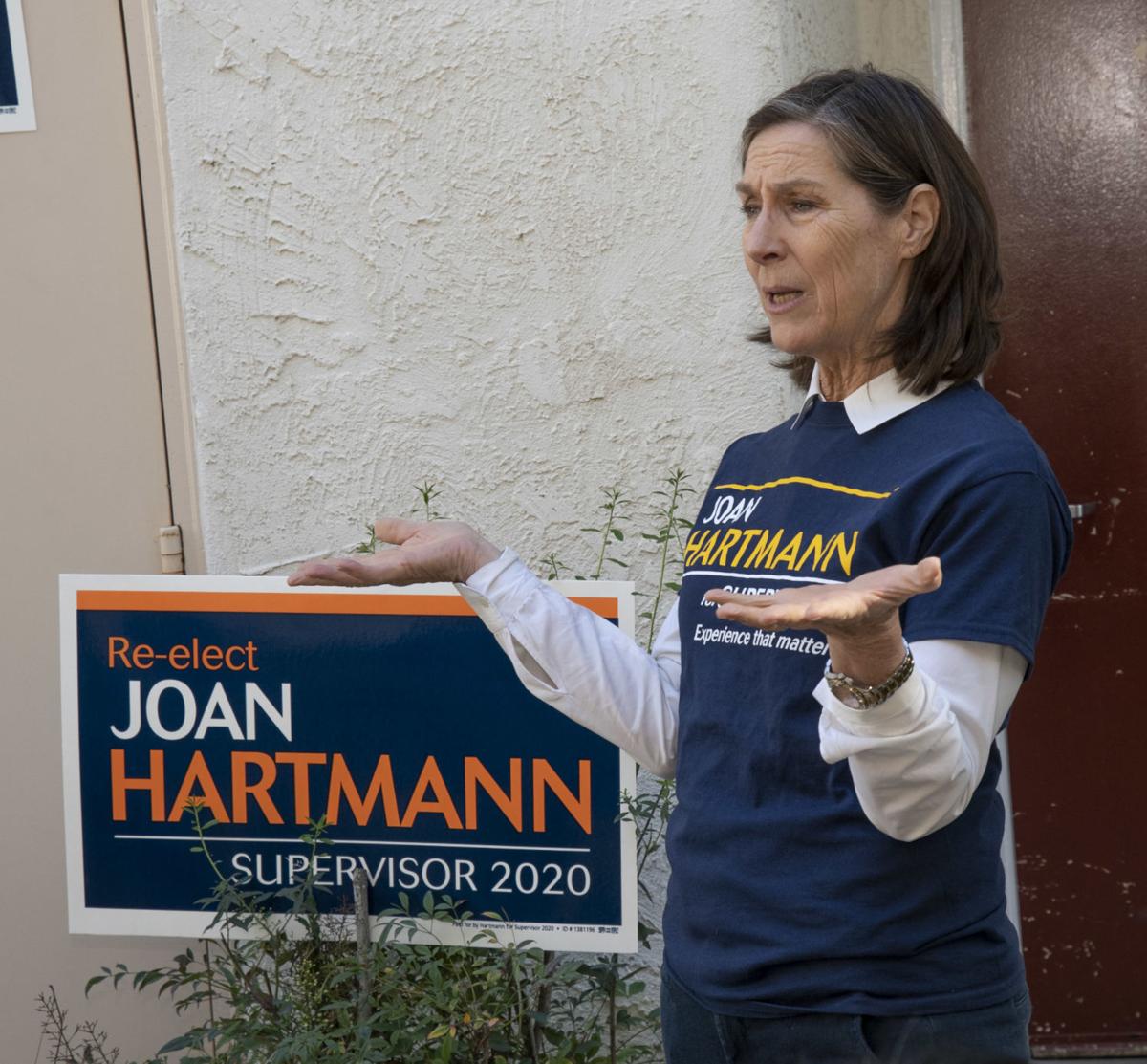 Santa Barbara County 3rd District Supervisor Joan Hartmann speaks to supporters at Democratic headquarters Saturday in Santa Maria. Hartmann and her supporters then headed to Tanglewood, where they campaigned door-to-door.