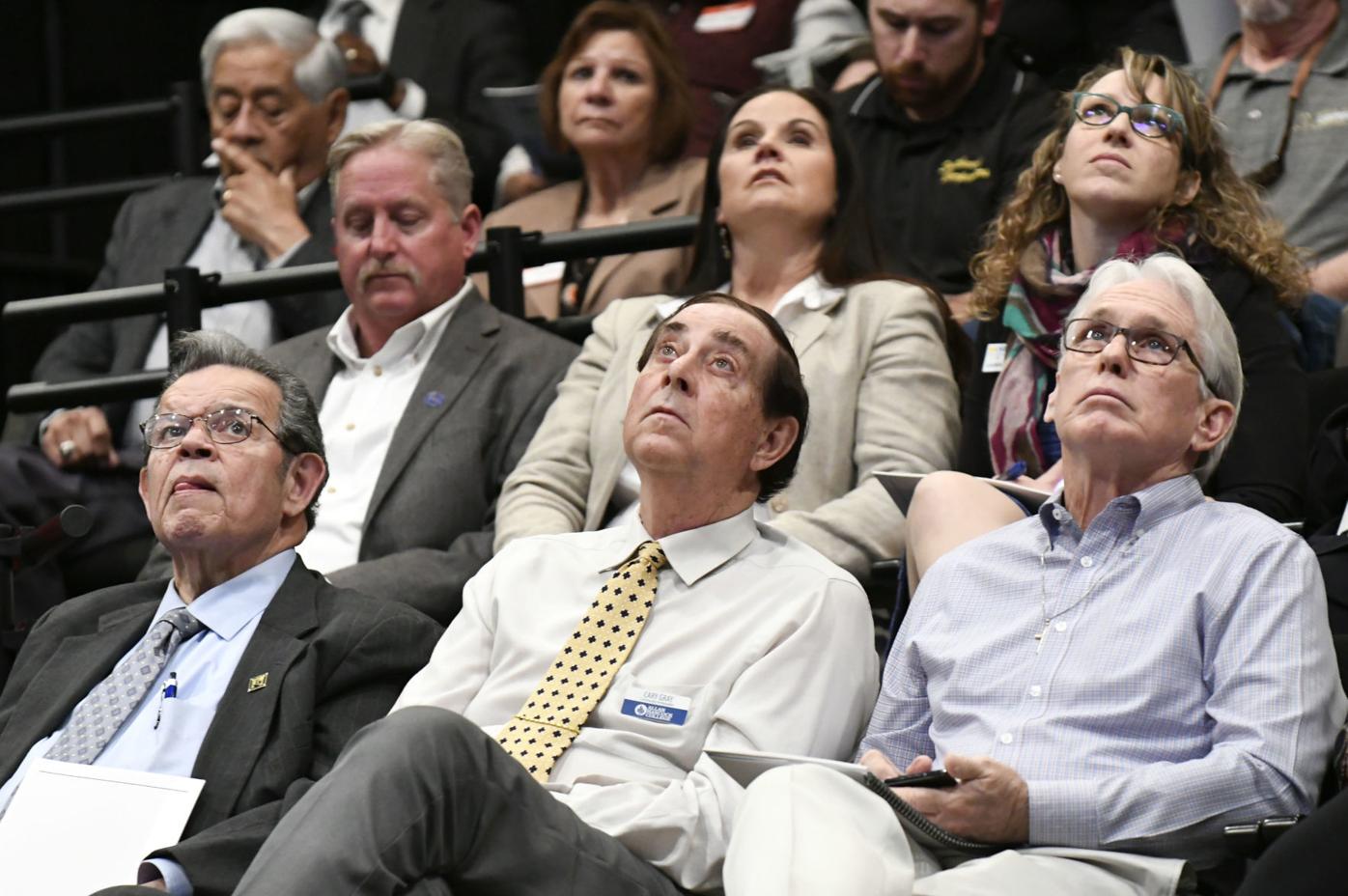 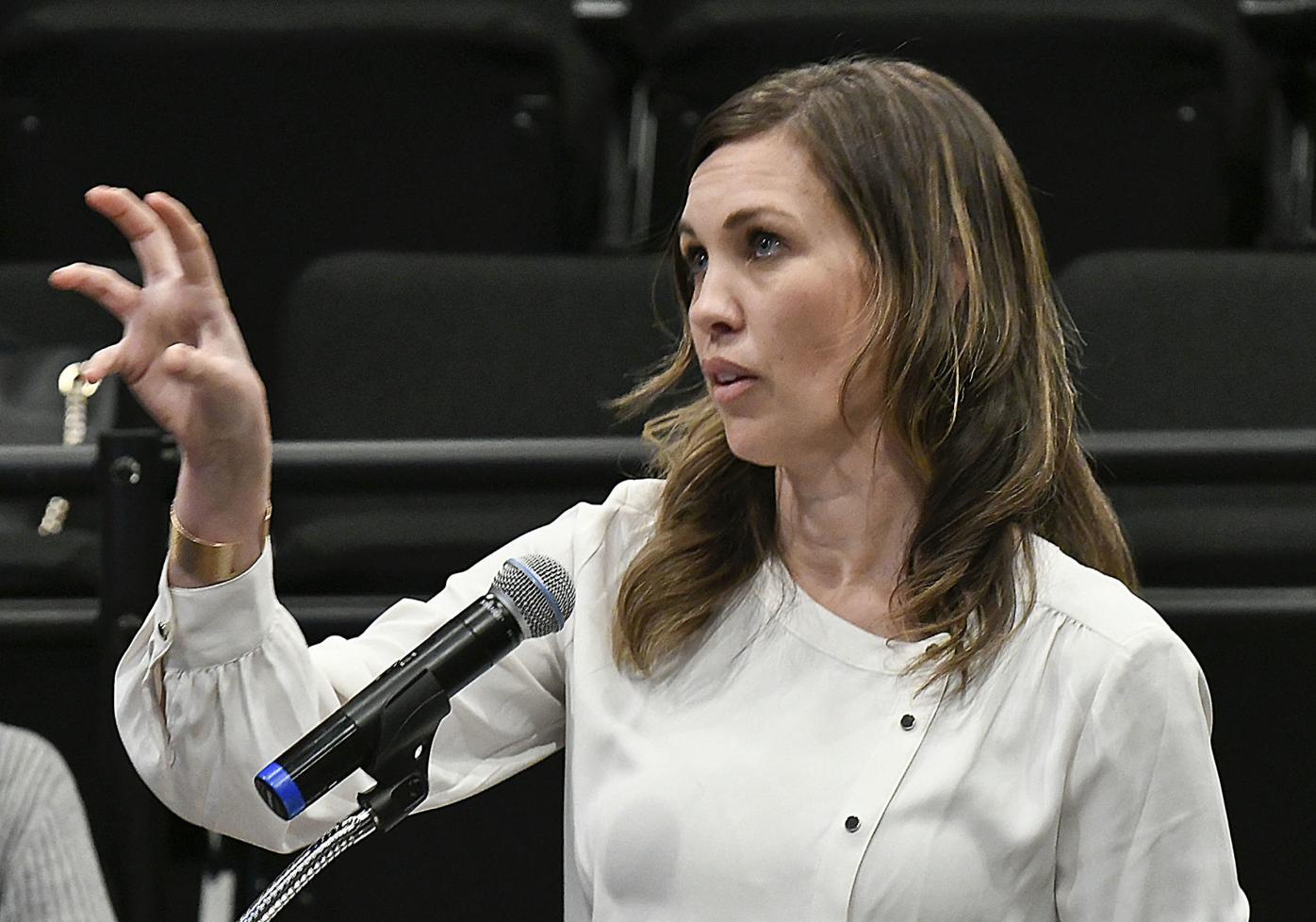 Melissa James, CEO of the Hourglass Project, previews her regional organization’s recently developed jobs action plan for the Central Coast region during an economic update presented by the Santa Maria Valley Chamber of Commerce and Aera Energy on Monday in the Severson Theatre at Hancock College.

Melissa James, CEO of the Hourglass Project, previews her regional organization’s recently developed jobs action plan for the Central Coast region during an economic update presented by the Santa Maria Valley Chamber of Commerce and Aera Energy on Monday in the Severson Theatre at Hancock College.

The event at Hancock College, sponsored by the Santa Maria Valley Chamber of Commerce and Aera Energy, drew a crowd of several hundred people to the Severson Theatre and also featured a presentation on the state's future need for renewable and petroleum-based resources by Dr. Chris Thornberg of Beacon Economics.

The Hourglass Project was initially presented as a proposal to the Central Coast Coalition of Chambers in 2018, as a way to unite local chambers and businesses to boost economic prosperity in a “Central Coast Super Region,” which includes San Luis Obispo County and the Santa Ynez, Lompoc and Santa Maria valleys.

James said the organization has been working on the action plan for the last nine months, with three main initiatives they hope to make a reality by 2030: integrating a network of partners to support businesses on a regional scale, expanding four-year degree educational opportunities, and creating a space enterprise at Vandenberg Air Force Base near Lompoc.

James said progress has been made when it comes to connecting local businesses for regional collaboration, with a board of directors consisting of 17  Central Coast organizations, including Madonna Enterprises and Marian Regional Medical Center, as well as the CEOs of the San Luis Obispo and Santa Maria Valley chambers of commerce.

The action plan described the need for more job training for emerging professionals through the creation of more four-year college degree programs, as well as the need to work with local universities like Cal Poly, Cuesta College and Hancock College.

The last initiative regarding the creation of a space enterprise at Vanderberg, James said, is being planned and funded in collaboration with the Air Force 30th Space Wing and the state governor’s office. The main need is for infrastructure funding at the base, James said.

“There is priority for Vandenberg happening across many levels,” James said.

As part of the action plan, the organization also commissioned Sacramento-based research group Smith Johnson Opinion Research to poll 540 registered voters ages 18 to 54 in San Luis Obispo and northern Santa Barbara counties about their experience with the economy on the Central Coast.

According to the survey, one out of two Central Coast residents polled said they believe they will be leaving the area in the next two years due to high costs of living and lack of employment, and 90% of young people polled (ages 19 to 24) said they are likely to leave the area, with nearly half saying they are “very likely” to move away.

“We often look at our employment at an aggregate level, or at our GDP, and give it a thumbs up and say our economy is doing well. But we know that is not true to the experience of most of our residents,” James said.

James said with these responses in mind, it is crucial to try to partner together to increase high-paying employment opportunities in the region, especially for the younger population who will be entering the workforce.

“We believe this vision can only be achieved by working together through a regional approach,” James said. “All of these things happen within the framework of collaboration."

The full REACH 2030 Regional Action Plan will be released and shared with the public March 16 at an event called the REACH 2030 Summit, set to take place at the Clark Center in Arroyo Grande.