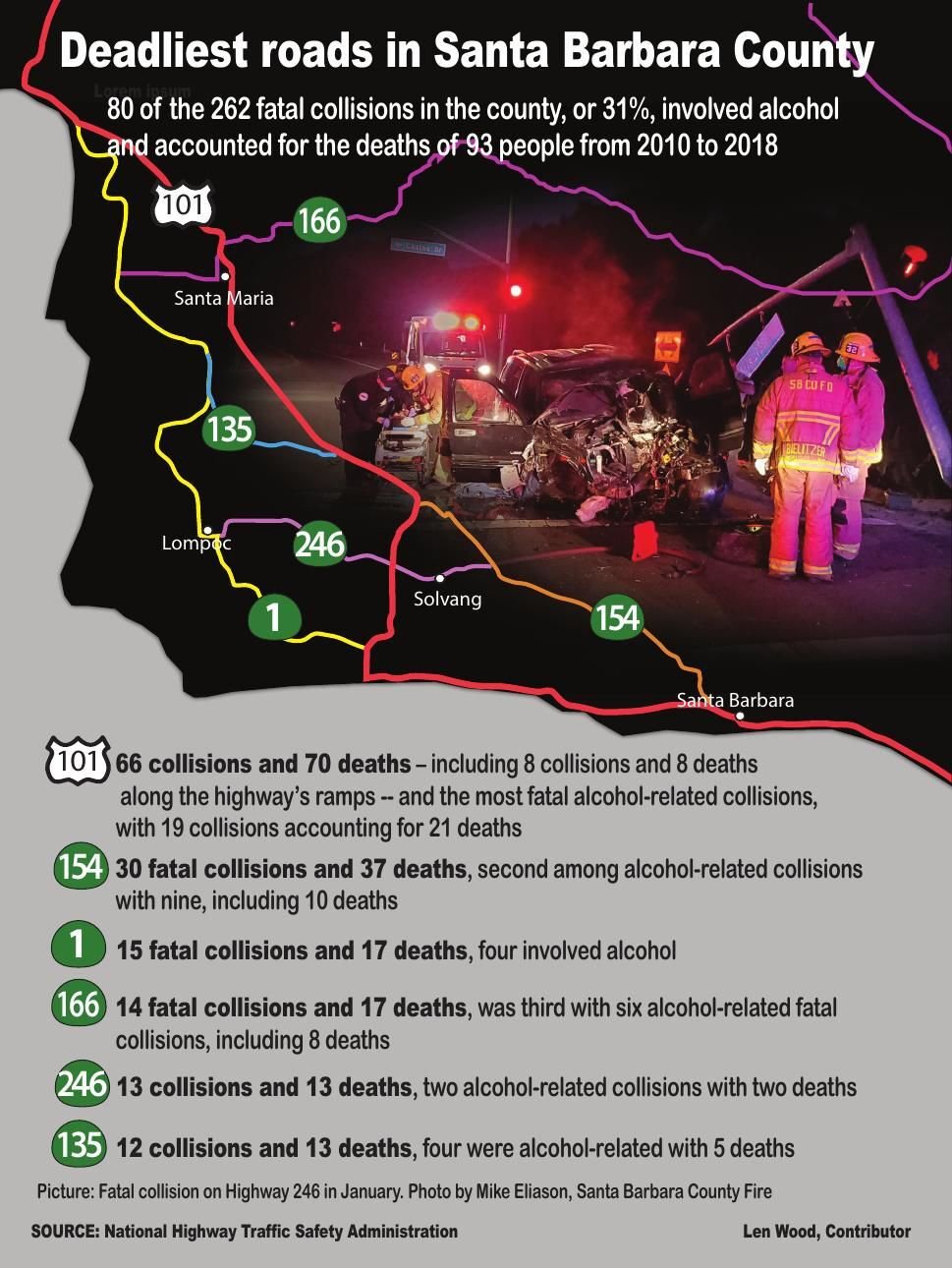 Highway 101 was the deadliest road in Santa Barbara County between 2010 and 2018, and nearly one-third of all fatal automobile collisions in the county involved alcohol, according to data from the National Highway Traffic Safety Administration.

In that time period, 80 of the county's 262 fatal collisions, or 31%, involved alcohol and accounted for the deaths of 93 people, according to the data, which include collisions with police-reported alcohol involvement or a positive alcohol test result.

Most of the fatal collisions occurred on or near Highway 101, with 66 collisions and 70 deaths and the most fatal alcohol-related collisions, with 19 collisions accounting for 21 deaths in the same time period, data show.

The high number of fatal crashes along Highway 101 may be consistent with the volume of traffic that travels the road, which is likely more than any other road in the county, according to Jim Shivers, Caltrans District 5 spokesman.

Highway 154 ranked second among deadliest roads in the county with 30 fatal collisions and 37 deaths during the time period, but first among alcohol-related collisions with nine, including 10 deaths.

Highway 1, or the Pacific Coast Highway, ranked third among the deadliest roads in the county with 15 fatal collisions and 17 deaths, although only four of them involved alcohol, with one on H Street in Lompoc.

Highway 166, which ranked as the fourth deadliest county road with 14 fatal collisions and 17 deaths, was third in alcohol-related fatal collisions with six, including eight deaths over the same nine-year period, according to data.

Highway 135 was the sixth deadliest county road with 12 collisions accounting for 13 deaths — four collisions were alcohol-related, including one in Santa Maria.

Only two alcohol-related collisions with two deaths occurred on Highway 246, although it ranks as fifth among the county’s deadliest roads with 13 collisions accounting for 13 deaths from 2010 to 2018, according to data.

One of those was the collision involving Benjamin Bettencourt, 44, of Santa Ynez, whose 2003 Ford E-350 van drifted off the road and struck a tree between Buellton and Solvang, killing his passenger, 39-year-old Jennifer Ann Clark, of Los Olivos, a popular teacher at Santa Ynez Valley High School.

Bettencourt, who lost the use of his legs in an earlier 1998 auto collision on Alisos Canyon Road that killed 18-year-old Lesley Alejo, was sentenced to five years in state prison for two DUI-related charges in April 2015.

Another Hwy. 246 collision that occurred on Dec. 19, 2013 in front of the Chumash Casino, was initially reported as involving only drugs, although it was adjudicated with a conviction for an alcohol-related charge.

Rebecca Cristal Sandoval, of Lompoc, was 39 at the time and was driving under the influence of the drug nitrous oxide when her vehicle struck another driven by 68-year-old Linda Jeanne Wall, a retired Santa Ynez Valley teacher who was stopped at a red light on Highway 246 and Cuesta Road. Wall was killed in the crash.

Sandoval pleaded guilty to charges including gross vehicular manslaughter while intoxicated and driving under the influence of alcohol. She was sentenced to 13 years and eight months in state prison on Jan. 22, 2016, according to court records.

In response to the collisions, Caltrans and California Highway patrol personnel have instituted measures to make deadly sections of roads safer, such as improvement construction and enforcement patrols.

Construction for a roundabout at the intersection of highways 154 and 246 east of Santa Ynez was completed in September 2014, one month ahead of schedule, following a rash of collisions.

"The history of broadside collisions is what prompted the safety project," Shivers said in 2014. "(Roundabouts) are proven to be effective in reducing collisions and accidents that result in injury."

A similar roundabout was installed at the intersection of Highway 246 and Purisima Road near Lompoc in May 2012, despite opposition from local officials, who called it a waste of money.

Former Lompoc Mayor John Linn criticized the project, saying the roundabout created a bottleneck, slowing traffic down from 55 mph to 15 mph and noting that it sits at the bottom of a hill, potentially creating problems for semi-trucks.

The roundabout came under scrutiny once more following the death of Ventura County firefighter Ryan Osler, who died after his truck overturned there on Sept. 21, 2016 while responding to a wildfire near Vandenberg Air Force Base.

One section of Highway 101 just north of Gaviota Tunnel to Old Coast Highway, a five-mile stretch of road, had four fatal collisions from 2010-2018

A high friction surface treatment project is proposed for this portion of Highway 101 and a rockfall protection project was completed in 2011, according to Shivers.

A roughly 18-mile stretch of Highway 1 from Lompoc to unincorporated Las Cruces is also the scene of a high number of collisions, with 12 fatal collisions during the data period and a majority of them occurring from 2015 to 2018. Three of them involved alcohol, killing three people.

Several construction projects have occurred along the route, including a paving project from Highway 101 to Highway 246 and resurfacing the road from Lompoc to Las Cruces, both in 2018, according to Shivers.

Additionally, lane line and centerline rumble strips were installed along the route.

Further to the north, into southern San Luis Obispo County, a section of Highway 101 from Tower Grove to El Campo roads was the scene of five fatal collisions from 2015 to 2018, including the death of Cal Poly student Jordan Grant, 18, on Oct. 7, 2018.

Grant was on his motorcycle traveling southbound on Highway 101 near the intersection of El Campo Road when a driver, Richard Giuli, made a left-hand turn from the road onto the highway, directly in front of Grant.

Grant’s death resulted in the closure of all median crossovers on that part of the highway, and the placement of concrete barriers known as “k-rails” in the center median from El Campo Road just north of Los Berros Road, according to San Luis Obispo CHP Officer Mike Poelking.

The number of fatal collisions is also addressed with maximum enforcement patrols, which are conducted periodically by California Highway Patrol units.

“During maximum enforcement periods, the Buellton area deploys 80 percent of all available field officers for each shift,” according to California Highway Patrol Officer Keith Rogers. “The enforcement operations focus on occupant restraints, speed violations, and driving under the influence of an alcoholic beverage and/or drugs.”

Rogers identified four common factors linking fatal collisions in his jurisdiction, which includes Highway 101 from the Gaviota Tunnel to Highway 154 — speeding, distracted and unsafe driving, alcohol, and passing on a double yellow line.