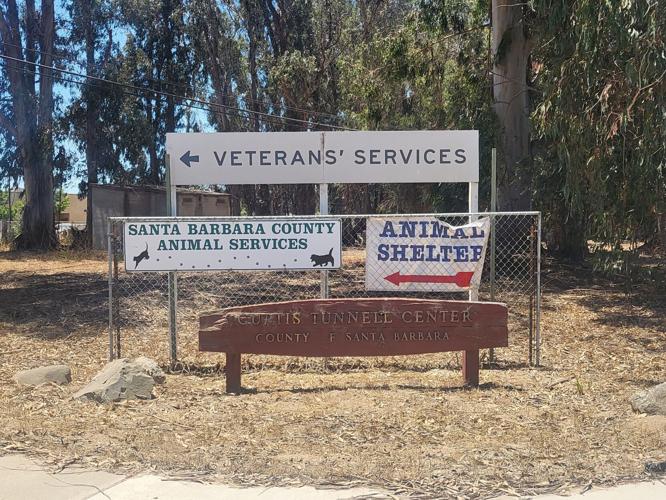 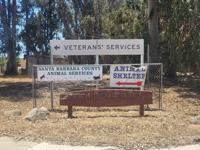 With the approval of its biennial budget, the Santa Maria City Council directed staff to come up with a plan to bring animal services in-house instead of contracting with the county. While no final decision has been made, whatever they decide could impact animal services countywide. 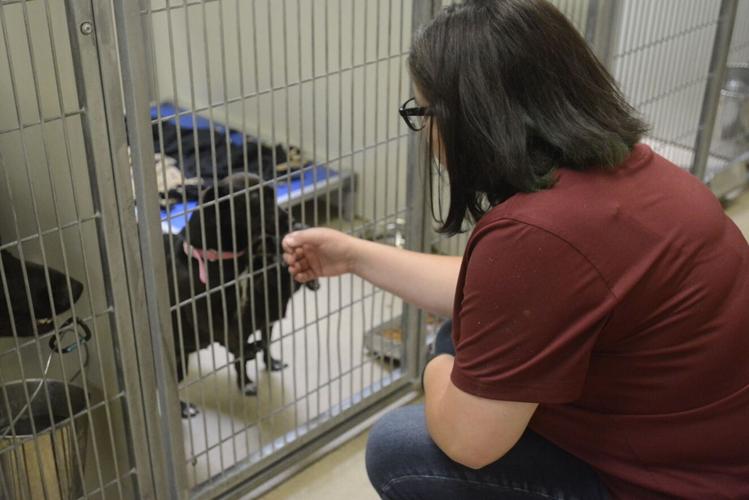 Jessica Ortega-Wiebe, from Santa Barbara County Animal Services Division, checks on two stray dogs brought in to the Santa Maria Animal Shelter in July 2021. Due to increased costs from the county, the City of Santa Maria is looking to bring animal services in-house.

With the approval of its biennial budget, the Santa Maria City Council directed staff to come up with a plan to bring animal services in-house instead of contracting with the county. While no final decision has been made, whatever they decide could impact animal services countywide.

Jessica Ortega-Wiebe, from Santa Barbara County Animal Services Division, checks on two stray dogs brought in to the Santa Maria Animal Shelter in July 2021. Due to increased costs from the county, the City of Santa Maria is looking to bring animal services in-house.

Santa Maria is one of several cities that contract out animal services to the county. However, according to the city's biennial budget approved on June 21, the county's new cost of service may be prohibitive. While the city will continue services as-is for the time being, city staff is recommending that the city transition its services in-house, while contracting out shelter space.

"So as we now do the work to analyze [the transition], we’ll bring back a plan," explained City Manager Jason Stilwell at the June 21 council meeting. "The likely result of that would be to reallocate the money that’s in the budget to staffing, and to begin bringing it in-house if the numbers are favorable to the city council."

The county provides the city with two main services — sheltering and field operations. Animal control officers, who respond to strays or other emergencies, and sheltering are both done out of the county animal shelter on West Foster Road.

The Santa Maria city council unanimously approved renewing the services with the county for another five years. However, city staff estimates that the cost for service could increase 31% in that time to more than $1 million dollars. The city's budget formalized the recommendation that city staff begin looking elsewhere, allowing staff to analyze what it would take to staff animal control and receive requests for proposal from area shelters.

The city could look to hire its own staff and contract out the sheltering services to local shelters like the Santa Maria Valley Humane Society, or choose to do one or the other. For example, Santa Barbara has its own animal control staff on the police force but contracts with the county for sheltering services.

The move stems from the April decision by the Santa Barbara County Board of Supervisors to approve the 5-year increase after previously rejecting its staff recommendation to make the increase in a single year. With Supervisor Bob Nelson absent, the board 4-0 in favor of the increase.

"I understand [the City of Santa Maria's] concern about the rising county charges for animal control, however I think they will discover this particular service is fraught with unanticipated costs," said Steve Lavagnino, 5th District supervisor. "The county is now reviewing all potential models as we anticipate their final decision.  What we cannot do, however, is continue to subsidize this service at a loss and any model decided on will include full cost recovery from our partners."

The plan reached the board after analysis and recommendations by MGT Consulting Group Inc. that they recuperate the full cost of services provided, and eliminate subsidies from the General Fund and Tobacco Settlement Fund that helped cities pay for animal control. For Santa Maria city staff, the issue boiled down to how they divvy up the costs.

"So the county is taking the full cost of their animal control program and allocated our share based on the city’s population," said Stilwell. "We had a little issue with that, because it would be more transparent for our taxpayers to know what service we’re getting, what staffing is here, what vehicles are here, and paying for those costs instead."

Santa Maria is not the only North County city considering moving away from the county's services. In May, the Lompoc City Council directed its staff to look at alternatives to the county. In April, some of the supervisors were worried about the domino effect the increase might have.

“If one city decides they don’t believe this is fair … the whole thing becomes unsustainable and, you know, there’s a rush to the exits,” 2nd District Supervisor Gregg Hart said at the time, noting “we are better together in these things.”

The sentiment, "we are better together," has been echoed by some community members and nonprofits who fear that the quality of services would decrease if splintered off into smaller jurisdictions. If Santa Maria pulls out from the county's largest animal services contract,  then it would likely reduce funding for animal services countywide.

"[Santa Barbara County Animal Services] needs the city contracts to survive as a viable entity providing services to animals in need of protection and care. Cities and other contract holders need a safe place to care for animals in need, along with programs for countywide health requirements such as rabies control and licensing," Elizabeth Reed, a longtime shelter volunteer, told supervisors. "The county and city boundaries are meaningless to the lost dog or cat."

Some also worry that local nonprofits and shelters aren't big enough to handle the work load. According to its website, the county took in an average of 12 animals a day in April.

"It is understandable that the cities are looking at a more cost effective option regarding animal control and sheltering," said Lee Heller, longtime animal welfare activist. "However, there is no indication where cost savings wouldn't reduce services provided. At this time the local humane society has not indicated that it's up to the task, nor does it have a field services open."

The Animal Shelter Assistance Program, or ASAP Cats, who partners with county animal services, is also concerned about the impact if Santa Maria or other cities don't work with closely with the county on these decisions. According to Bernard Kelmenson, president of the board of ASAP Cats, its not always about the most economic decision when it comes to animal welfare.

"If we were looking at potential areas where quality of care might drop, the first thing we usually see is euthanasia going up, because as you look for cost savings often times the result is you need to make difficult decisions," he explained. "Another might be quality of care within the shelters, due to less behavioral stimulation and qualitative care rather than simply housing the animals."

For now the status-quo of county based services will continue as Santa Maria does its analysis. The city has not released a time table for putting any potential changes in front of the city council.

Joshua Nelson is the City Government Reporter for the Santa Maria Times.