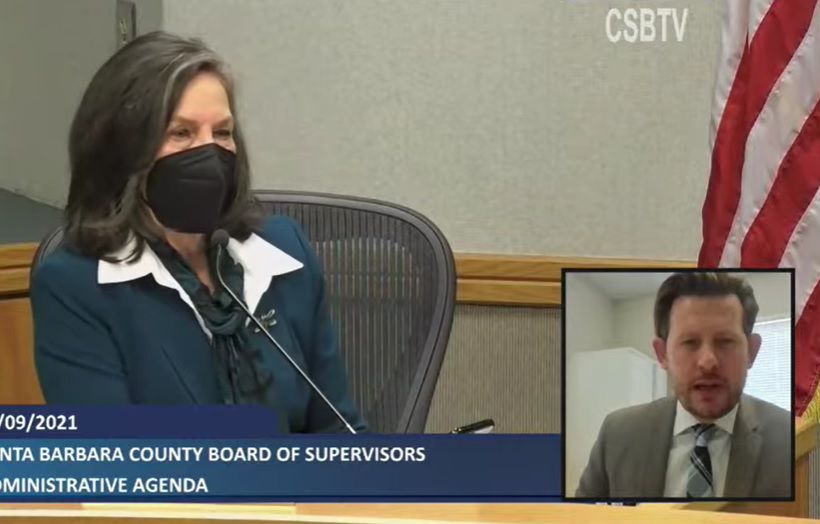 Santa Barbara County 3rd District Supervisor Joan Hartmann listens as Lars Seifert, inset, director of the Environmental Health Services Division, responds to her questions about the microenterprise home kitchen operations ordinance in this screen capture from CSBTV's livestreaming of the March 9 board meeting. 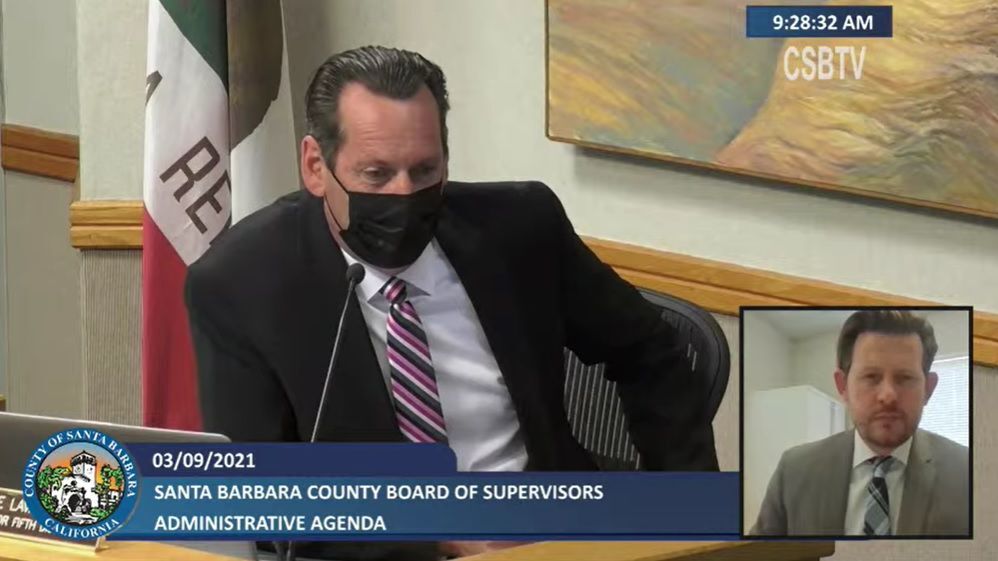 Santa Barbara County 3rd District Supervisor Joan Hartmann listens as Lars Seifert, inset, director of the Environmental Health Services Division, responds to her questions about the microenterprise home kitchen operations ordinance in this screen capture from CSBTV's livestreaming of the March 9 board meeting.

An ordinance that would allow Santa Barbara County residents to serve and deliver food made in their kitchens failed to gel on March 9 after complaints from Santa Maria officials and business owners prompted the Board of Supervisors to delay its adoption and direct staff to conduct more community outreach.

Supervisors approved the ordinance to allow microenterprise home kitchen operations, or MEHKOs, on a first reading March 2 and were poised to adopt it with a second vote on the administrative agenda last week.

The ordinance was pulled from the administrative agenda by 5th District Supervisor Steve Lavagnino as well as public requests to speak about the ordinance.

“The ordinance negates many areas of public safety outside of food,” Castaing told the board. “It limits appropriate fire suppression, building and zoning laws. Additionally, MEHKO operations are in clear conflict with our current permitted home occupation laws and sets an unfair advantage to everyone who is currently operating with licenses and permits.”

Castaing said the ordinance and state law permitting it would give home kitchens an unfair advantage over traditional restaurants and fails to protect public health.

“If approved, this ordinance will allow residential properties to convert to restaurants without any of the health and safety requirements generally imposed on restaurants and other food facilities,” Patino said.

She said the city already has enough problems dealing with unpermitted food operations.

“We have seen beef jerky in the back of a pickup truck and tamales being made in bathtubs in our community,” she said.

Fifth District Supervisor Steve Lavagnino said when he first looked into the home kitchens ordinance, he saw it as an enforcement tool that would encourage unpermitted operations to become legal, but he now could not support its adoption.

“I’m not going to try to impose something on people so adamantly opposed to it,” he said. But he later added, “I think this is more fear-based.”

Other supervisors were more supportive of the ordinance and attributed some of the opposition to lack of knowledge about its provisions and a reaction to the COVID-19 pandemic.

“I think there is a great deal of misunderstanding about this, about the facts,” 2nd District Supervisor Gregg Hart said.

First District Supervisor Das Williams said he has been trying to support the county in not regulating every aspect of business life and that the cottage food industry previously allowed by county ordinance was operating successfully.

“I honestly think this is a reaction to the moment that we’re in,” Williams said. “It’s not as if every bakery has been forced out of business by the little home baker.”

Third District Supervisor Joan Hartmann said the ordinance was an attempt to provide people ways to make money in their homes.

“It’s an opportunity to provide healthier food in food deserts,” she said.

Board Chairman and 4th District Supervisor Bob Nelson said he generally supports transitional businesses, noting a food truck in Orcutt developed a following and is now opening a brick-and-mortar restaurant.

“I see this ordinance as bringing people in the dark … into the light,” he said. “To me, this is the JV team working its way up.”

In the end, however, the board voted unanimously to continue a decision on the ordinance to the May 11 meeting to give the staff time to meet with representatives of the cities, businesses and the community in general to vet the ordinance and its provisions.