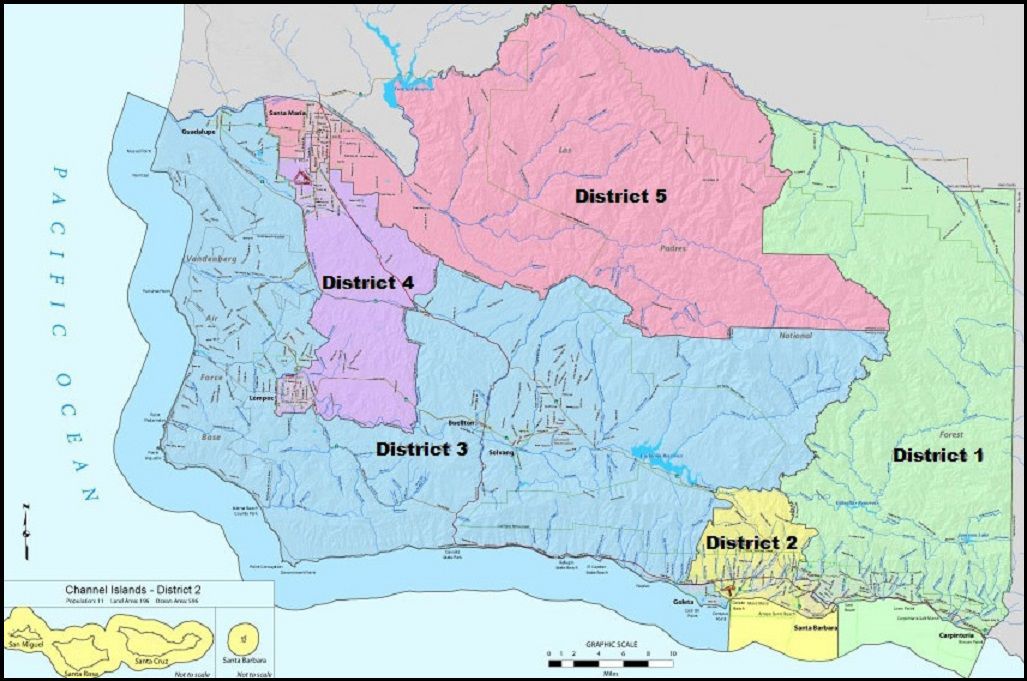 A map shows the boundaries of the existing supervisorial districts in Santa Barbara County that will have to be redrawn following the 2020 federal census. 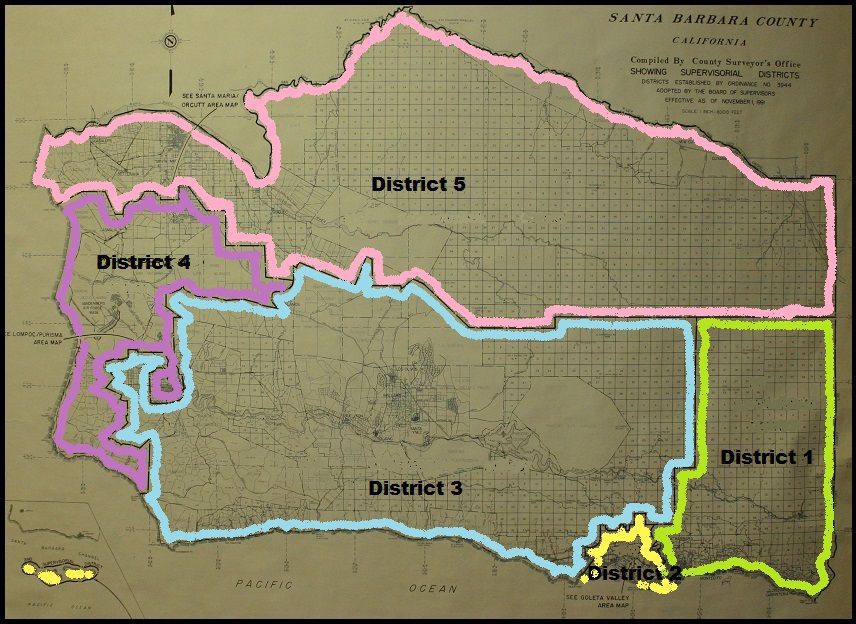 A map shows the boundaries of the existing supervisorial districts in Santa Barbara County that will have to be redrawn following the 2020 federal census.

Santa Barbara County was way ahead of the curve in November 2018 when voters approved Measure G establishing the “You Draw the Lines” ordinance to form an independent commission to determine new supervisorial district boundaries.

“We’re one of the agencies of government that got this done early in the cycle,” said Dennis Bozanich, deputy county administrator. “A lot of them won’t even be considering it until March 2020 — or even November 2020. We were like 2½ years ahead of the curve.”

By federal law, legislative bodies are required to redistrict after a major U.S. census to ensure fair and equal representation as populations change.

But in the past, various political parties and legislators have sought to keep themselves in power — or even increase their control — by manipulating the boundary lines, a process known as gerrymandering.

The next U.S. census is coming up in 2020, so supervisorial district boundaries will have to be redrawn in 2021.

But with efforts being made at the federal and state levels to avoid gerrymandering, many local legislative bodies — often under pressure from the public — are choosing to use independent commissions to redraw their boundaries.

In May 2018, a Santa Barbara County citizens group called Reason in Government submitted a petition to have its Initiative to Create a County of Santa Barbara Independent Redistricting Commission placed on the November ballot.

The initiative would create an ordinance specifying how a commission would be constituted, but after the petition was submitted, community organizations apparently expressed concerns about some of the initiative’s provisions.

In response, the office of 1st District Supervisor Das Williams put together an alternative ordinance.

Supervisors could have adopted either ordinance, but rather than choosing one over the other, the board decided to put both of them before the public in the November election.

But just because the voters told the county four months ago how they want a redistricting commission to be formed, that doesn’t mean it will be done anytime soon.

“The census data is only going to be collected next April and thereafter, so we won’t be forming a commission until we receive that data,” Bozanich said. “There’s no reason to have a bunch of people sitting around staring at maps until the data is in.”

Bozanich said the tentative timeline is to start the commission formation process at the end of 2020 using “the typical recruitment process we use for putting together such groups.”

Bozanich said there’s no need to develop any additional procedures for forming the commission.

“The legislation the voters adopted is pretty straightforward,” he said. “There’s no need to create any additional legislation (to implement it). If we made any changes, we’d have to go back to the voters again anyway. And we don’t want to go through that.”

Basic qualifications needed to be eligible for the committee are set out in the ordinance, and those who meet the qualifications can apply for appointment.

The county election official will then choose the 45 most qualified applicants based on analytical skills, being able to understand applicable state and federal regulations, the ability to be impartial and having an appreciation of the county’s diverse population and geography.

At least five applicants from each supervisorial district must be included in the list of 45 top applicants, which will be made public for a 30-day period, during which any applicants found to not meet qualifications can be eliminated.

After the 30 days, the elections official will create five subgroups of five applicants, one subgroup for each of the existing five supervisorial districts.

Then, at a subsequent Board of Supervisors meeting, the district attorney will conduct a random drawing to select one commission member from each of the five subgroups.

Those five commissioners will review the applications of the people remaining in the five subgroups to select another six people — one from each district and one at-large — to sit on the commission.

In addition to the previous criteria, the six must be selected to represent the county’s racial, ethnic, geographic, age and gender diversity of the county.

But they also must be chosen based on their political parties, so that the number of chosen from each party is in proportion to the percentage of county voters registered in each party.

Once the commission is established, the members can get down to the business of redrawing the district boundaries.