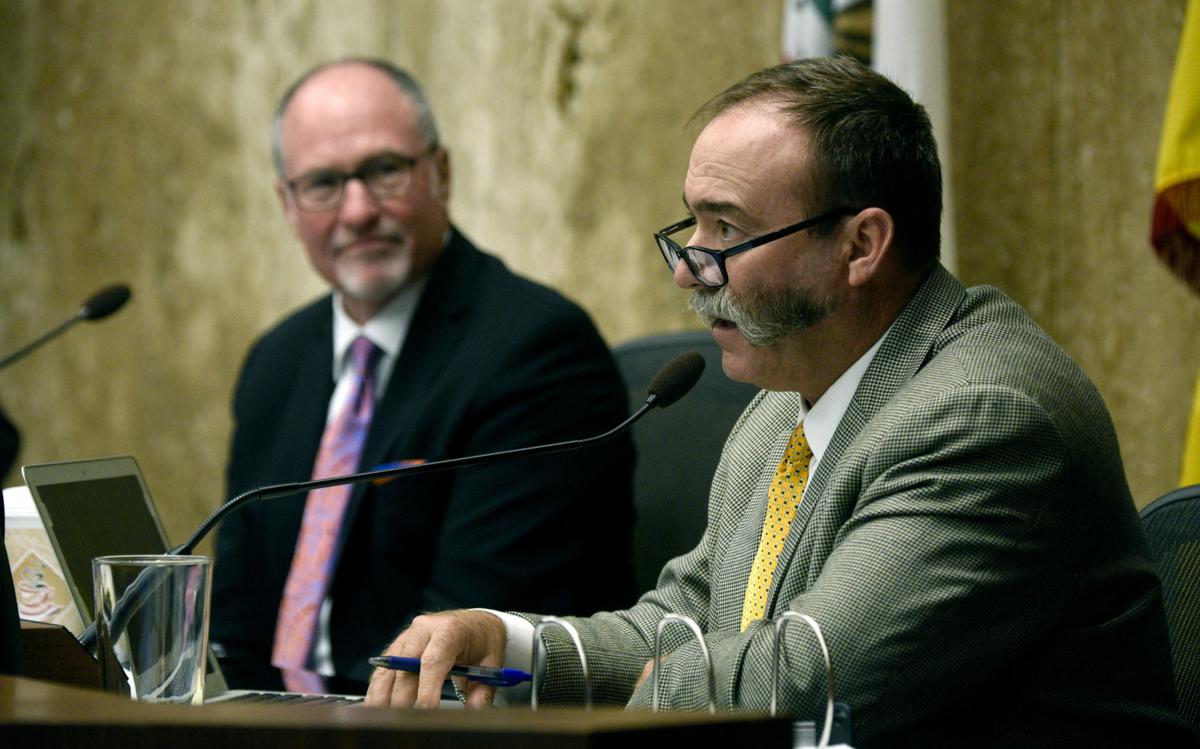 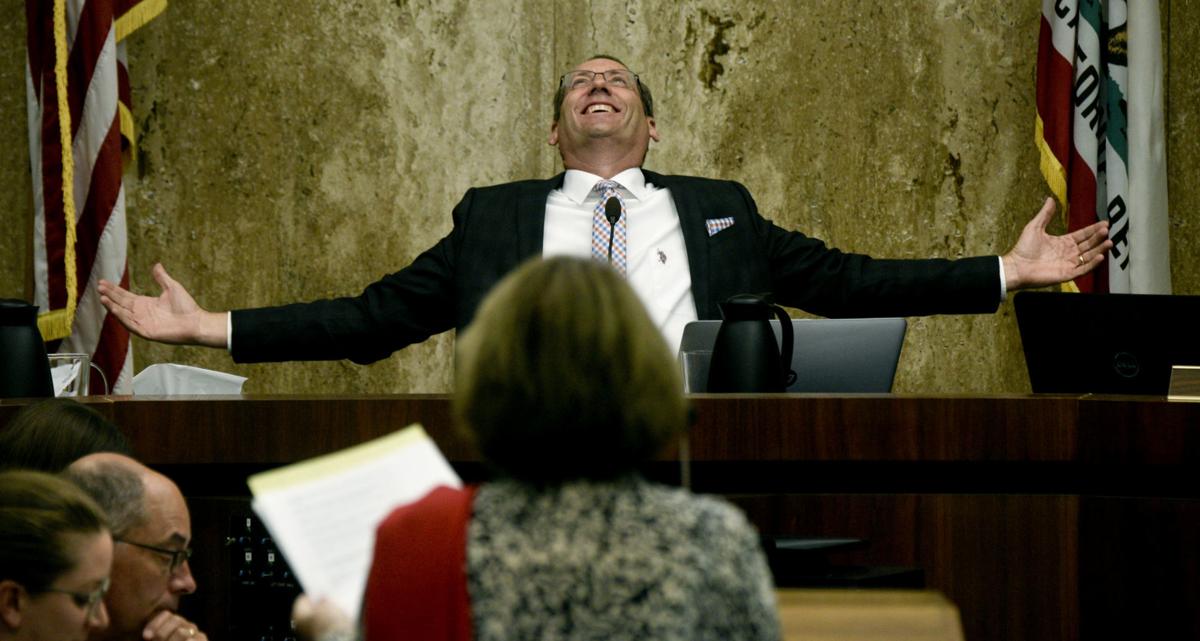 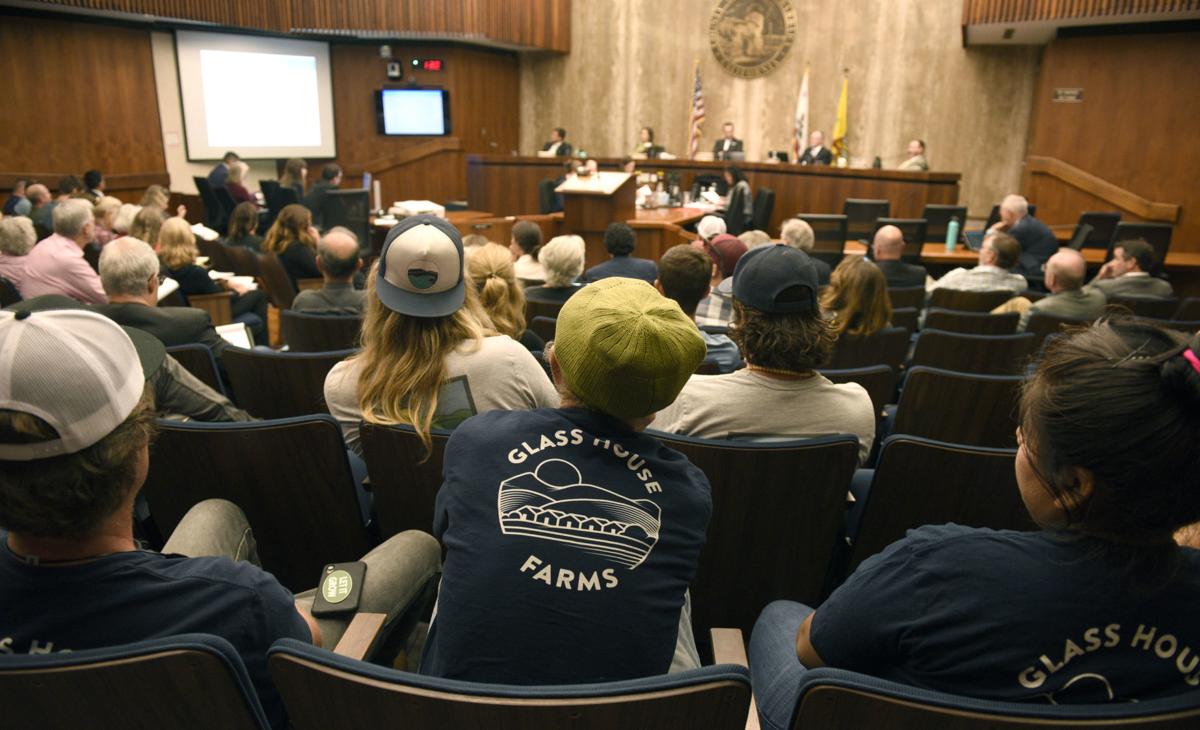 Spectators listen in the hearing room in Santa Barbara as the Santa Barbara County Board of Supervisors considered several cannabis issues Tuesday. 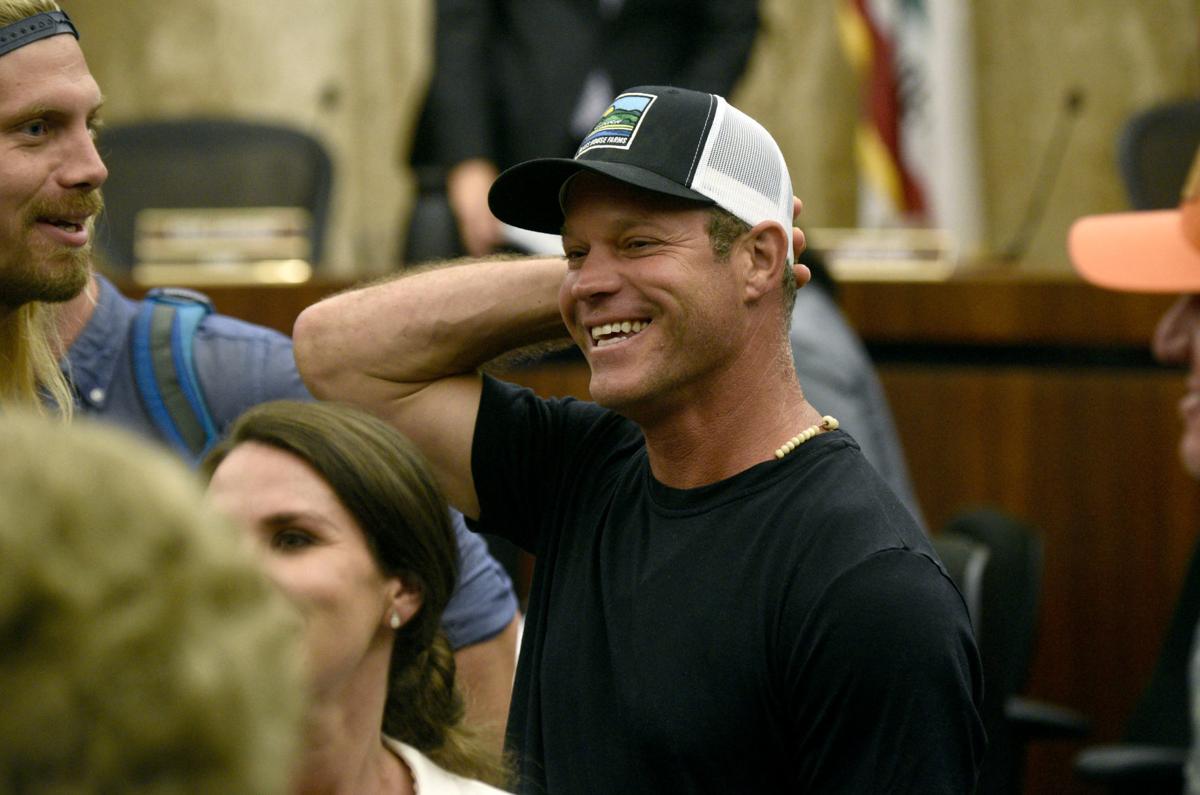 A lottery system for issuing storefront retail cannabis business licenses was scrapped Tuesday by the Santa Barbara County Board of Supervisors in favor of a merit-based system, but a proposed cap on cultivation acreage earned approval.

Neither vote was unanimous as the ordinance amendments requested by the board in July were presented by the staff at the meeting in Santa Barbara.

Supervisors voted 4-1, with 4th District Supervisor Peter Adam dissenting, to approve the 1,575-acre cap on cannabis cultivation in the unincorporated areas of the county outside the Carpinteria Agricultural Overlay zone and adding two new business licensing fees to recover the cost of staff time.

Adam voted “no” because he thought that rather than a countywide cap on acreage, the ordinance should focus on the density of cultivation operations to prevent them from becoming too concentrated.

The Lompoc Valley Cannabis Association is set to host its first “CannaBrew,” a cannabis industry social mixer. The event aims to provide a networking platform for established and up-and-coming cannabis companies, industry professionals, ancillary service providers and supporters from Lompoc and Santa Barbara County with influence across the Central Coast. It is scheduled for 6 to 9 p.m. Wednesday, June 26, at Lompoc’s Hangar 7, 107 W. Ocean Ave.

“We have to do something,” he said. “We can’t just sit here and do nothing and let these conflicts put our orchards and vineyards out of business.”

But in a separate 4-1 vote, with 5th District Supervisor and Board Chairman Steve Lavagnino dissenting, the board decided to direct the staff to develop a merit-based system for determining who will receive one of the limited number of storefront retail business licenses rather than using a random drawing of prequalified applicants.

He asked to separate the storefront retail cannabis license requirements from the other ordinance amendments as “almost a protest vote on the retail process.”

“I just don’t like changing in the middle of the process,” Lavagnino said.

The ordinance amendments will return at the Aug. 27 meeting for a second reading and final approval, while the change in retail storefront license process will go to the staff for developing a new system.

Much of the supervisors’ discussion and public comments during the three-hour hearing centered on the cultivation cap.

Most members of the public felt the cap was too high and complained that it would still allow concentrations of growing operations that would only exacerbate conflicts with agriculture and increase the nuisance factor for residents.

Nancy Emmerson of the Santa Ynez Valley organization WE Watch listed a number of problems caused by cultivation, including the offensive odor, which mixed-light growing failed to eliminate, and growing sites too close to neighborhoods as well as too many acres clustered together and too close to other agriculture.

“‘Yes’ to a cap, but base the figure on wise land use that deals with these significant problems,” she told the board, adding that 1,500 acres was too much and the cap should be per parcel or a percent of the property, whichever is less. “Cultivation may have to be limited to a sealed process.”

Avocado grower Sharyne Merritt agreed, but said more was needed, including conditional use permits for all applications, citing impacts on her operations west of Buellton.

“The cap is a good first step, but it’s not enough to help agriculture,” she said, pointing out ag operations near cannabis can’t apply pesticides to their crops, so farmers and wineries won’t be willing to rent land near cultivation sites.

“We see no reason this county should support a cannabis industry that makes us a world leader,” said Lil Clary of Tepusquet.

Many of the cannabis operators who spoke supported changing the retail storefront license selection from a random drawing to a merit-based system because of their experience in other areas of the state.

Commercial cannabis operations should be allowed on all inland properties zoned Agriculture 1 if a conditional use permit is obtained, the Santa Barbara County Planning Commission decided Wednesday on a split vote.

“Cities that retain the most control have the best outcomes for the operators and their communities,” said Devon Wardlow, director of public affairs for Coastal Dispensary in Santa Barbara.

Hundreds of volunteers will pick up trash, plant trees, clean up graffiti and help over two dozen mobile home park residents with painting and landscaping Saturday in honor of the 18th Serve Santa Maria.

Santa Maria is pursuing a variety of energy-efficiency projects, including installing new lighting at city parks and building an array of sola…

Laura Capps, a member of the Santa Barbara Unified School Board, announced Tuesday her candidacy for the 1st District seat on the County Board…

An overflow crowd of vineyard owners and cannabis growers as well as other agriculturists and county officials packed the Industrial Eats ballroom in Buellton for a panel discussion of a potential joint tourism marketing effort.

Santa Barbara County trying to clean up its employees’ commute

After wrestling with reports and public opinion through hours of hearings, the Santa Barbara County Planning Commission drafted a resolution addressing some of the issues surrounding the cannabis industry that will be forwarded to the Board of Supervisors to consider enacting as ordinance amendments.

Spectators listen in the hearing room in Santa Barbara as the Santa Barbara County Board of Supervisors considered several cannabis issues Tuesday.