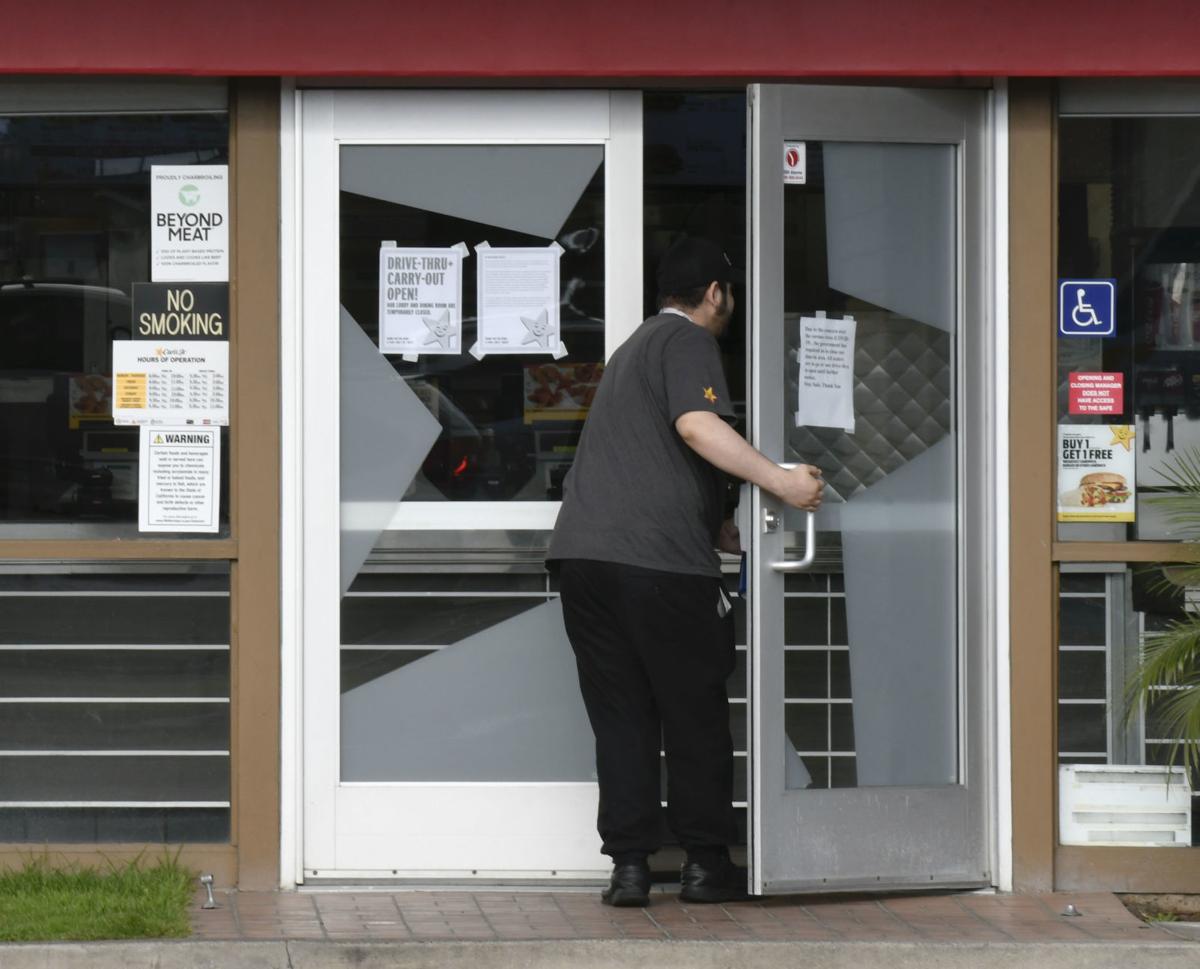 An employee at Carl's Jr. on South Broadway in Santa Maria enters the store, which is open only for drive-thru and takeout orders as part of the effort to contain COVID-19, on Friday. 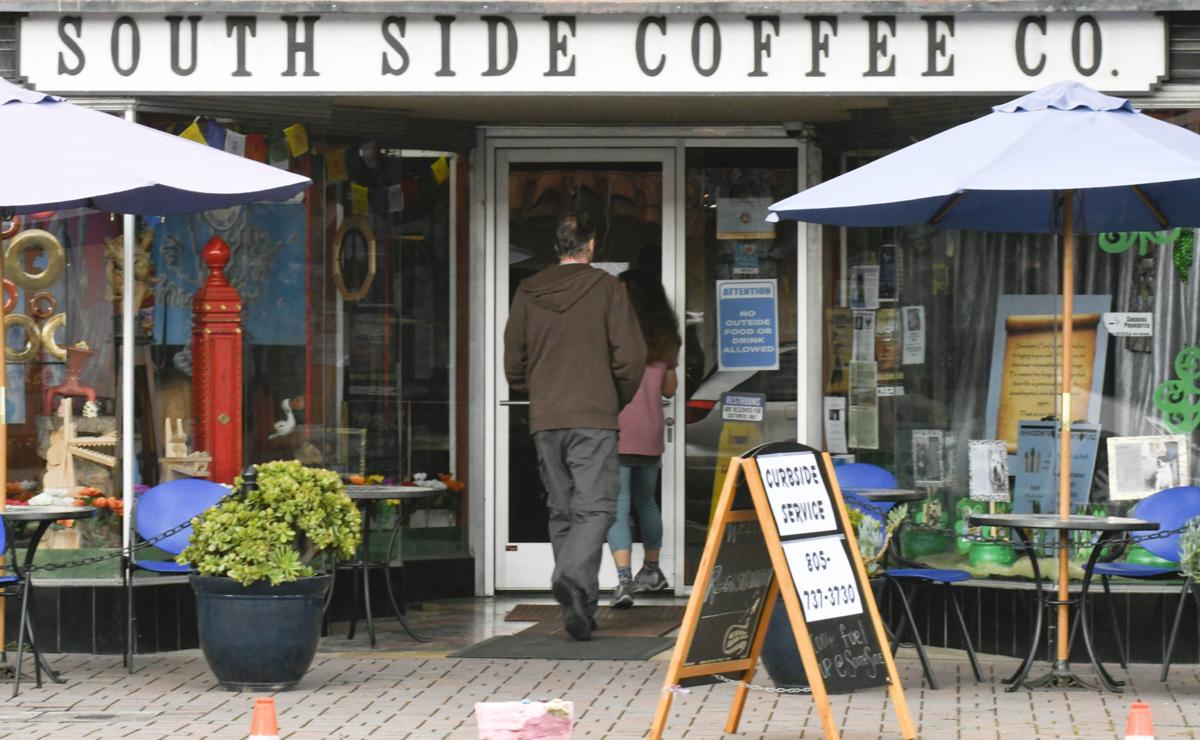 The Santa Barbara County community has done a good job holding down coronavirus infection even as local agencies are expanding and strengthening their efforts, but health officials on Tuesday urged residents to be more vigilant about precautions to prevent the spread of COVID-19.

Financially, the impact to the county of the shelter-at-home order and social distancing might be less, proportionately, than it will be to cities, but the county is still facing a loss of at least $3 million in general fund revenue for the current fiscal year, county officials said.

Coronavirus Photos: Take a look at the impact of coronavirus in Santa Barbara County

But the policies that are keeping down transmission of the virus were also criticized for their broad focus and impact on the economy.

Those and other issues came up in a report to the Board of Supervisors meeting Tuesday in Santa Barbara.

The number of COVID-19 cases escalated within hours after the report was presented.

“We really need as a community to flatten the curve, to be really good partners to reduce the spread in the community,” said Public Health Department Director Van Do-Reynoso.

She was referring to the curve on a graph accompanying the report that showed how implementation of mitigation measures had kept the level of infection at just above the level of the health-care system’s capabilities rather than spiking far above.

“Through these behavior changes we can see the difference in our own community,” she said.

But 4th District Supervisor Peter Adam questioned implementing a full shelter-at-home policy and the lack of available COVID-19 tests to check everyone, even those not showing any symptoms.

With 494 people being tested and only 19 confirmed cases when Do-Reynoso delivered her report — 246 test results were pending — Adam noted that only a tenth of a percent of the county’s population had been tested.

But if all the people who had the virus but are not showing symptoms could be identified and isolated, “then you don’t have to decimate the economy,” Adam said.

His comments were echoed by Andy Caldwell, representing the Coalition of Labor, Agriculture and Business, who asked that the Public Health Department put numbers on the graph of curves.

“The original curve is an explosion of infection rates, and we expected that,” Caldwell said. “You went to overkill, in our opinion, in shutting down the economy.”

He said the public health officer had it right when he recommended only the most vulnerable — the elderly with underlying health problems — should be isolated because 95% to 99% of the population would not be affected.

“We have self-inflicted blows to our economy,” he said.

Jeff Frapwell, assistant county executive officer, said the county is estimating it will lose $1.8 million in sales tax and $1 million in transient occupancy tax revenues as well as $250,000 in interest income for a total of about $3 million this fiscal year.

“That number will increase,” he said, adding it did not include impacts to the county’s operating funds.

“If there is any silver lining in this, the percentage [of revenue] coming from economically sensitive sources is small,” he said.

He said he doesn’t see a significant adjustment in property taxes unless the situation is really prolonged, although properties assessed based on income would be the most vulnerable.

Harry Hagan, tax collector and treasurer, said he couldn’t change the date for the second installment of property taxes, but he said he can waive penalties for late payment due to impacts from COVID-19.

Hagan said the board could also close his office on the due date as if it was a holiday, which would delay it until the next day it was open — which could be weeks if the current situation continues.

Adam advised fellow board members and staff to prepare for a worsening situation.

“They’re talking about massive numbers of bankruptcies even now,” he said. “Next year, I would recommend we start hoarding cash to get through something worse, and if we end up with a pile of cash, what’s wrong with that?”

“I’ve noticed a change in our community,” Lavagnino said. “We seem more connected.”

Public to be physically barred from meetings

Based on guidance from the California Department of Public Health and the California Governor's Stay at Home Executive Order issued March 19, in response to the coronavirus pandemic, the Santa Barbara County Board of Supervisors will no longer allow in-person public participation at its meetings.

The change was announced in Tuesday’s board meeting by Jacquelyn Alexander, clerk of the board.

However, members of the public can participate and provide comments on issues being discussed by emailing them to sbcob@countyofsb.org to have them read into the record by clerk of the board.

Members of the public also can call 805-568-2240 and provide their name and phone number and the item to be commented on, and the clerk of the board will call back at the appropriate time to comment.

Meetings can be viewed via livestreaming online at www.countyofsb.org/ceo/csbtv/livestream.sbc or on YouTube at www.youtube.com/user/CSBTV20. They are also aired and rebroadcast on Local Cable Channel 20.

St. Mary of the Assumption

A request for National Guard troops was placed by Santa Barbara County Foodbank officials, who now seek help as the demand for food has surged from cash-strapped individuals recently laid off after businesses were shuttered to curb the spread of COVID-19.

An employee at Carl's Jr. on South Broadway in Santa Maria enters the store, which is open only for drive-thru and takeout orders as part of the effort to contain COVID-19, on Friday. 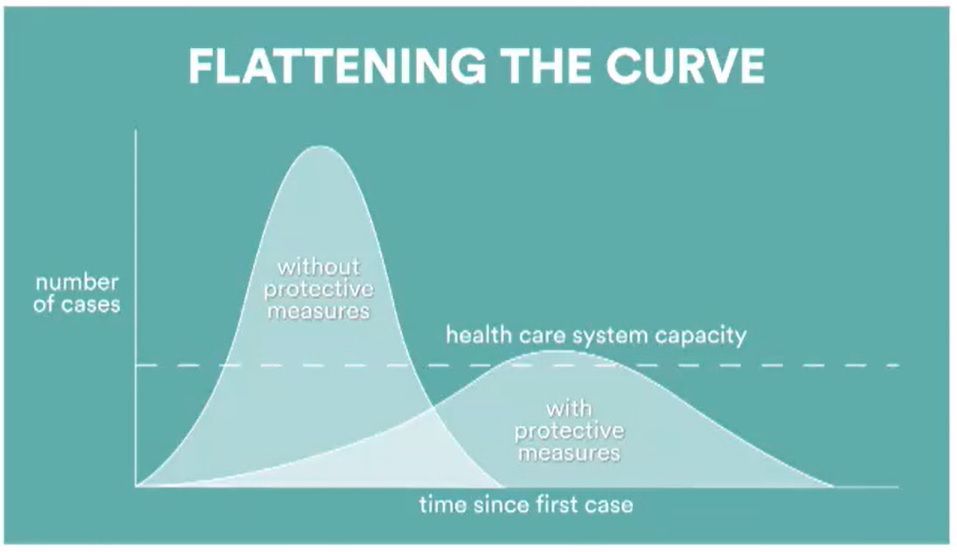 Although it didn't contain any numerical measurements, a graph shown Tuesday to the Santa Barbara County Board of Supervisors shows the level of COVID-19 infections the county would have experienced without any mitigation measures, at left, and the actual level as a result of social distancing and sheltering in the home, at right. Public Health Department officials are asking the public to flatten the curve even more.