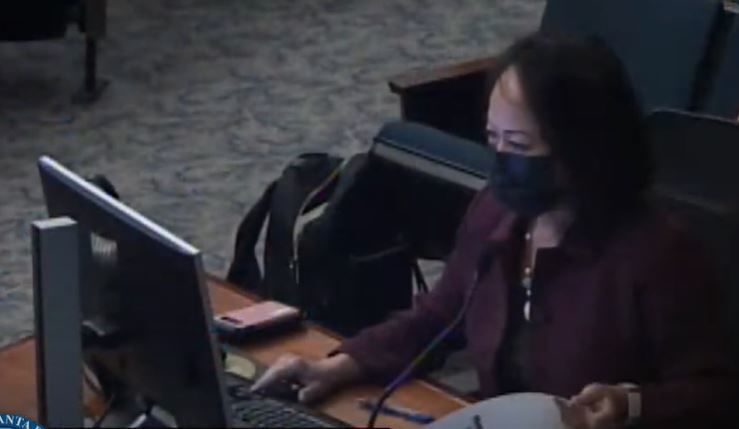 Santa Barbara County Public Health Department Director Van Do-Reynoso delivers an update on the status of COVID-19 in the county to the Board of Supervisors on Tuesday. 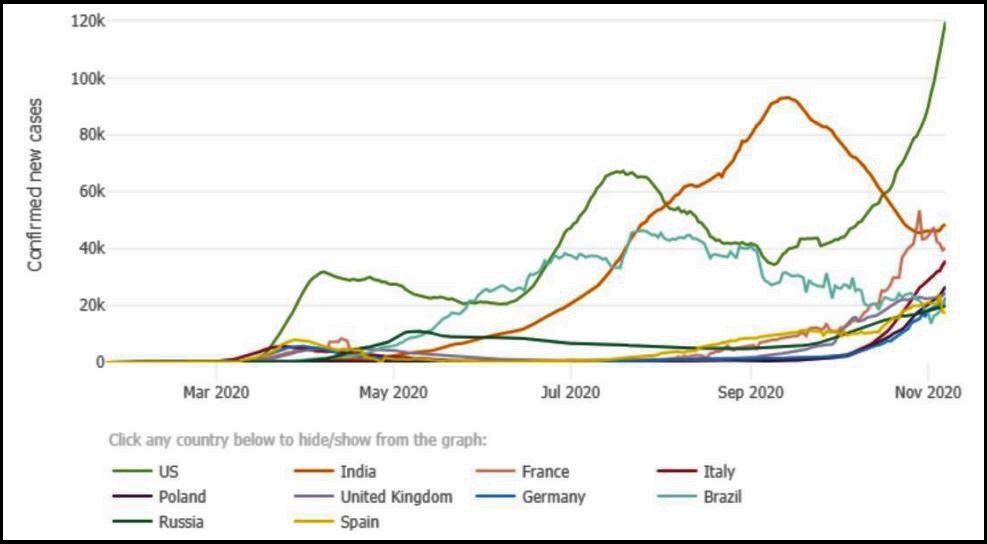 A graph using Johns Hopkins University data depicts the number of new confirmed COVID-19 cases per day in the 10 countries most affected by the coronavirus, with the United States represented by the sharply climbing green line.

Santa Barbara County Public Health Department Director Van Do-Reynoso delivers an update on the status of COVID-19 in the county to the Board of Supervisors on Tuesday.

A graph using Johns Hopkins University data depicts the number of new confirmed COVID-19 cases per day in the 10 countries most affected by the coronavirus, with the United States represented by the sharply climbing green line.

The rate of new COVID-19 cases being reported each day has remained relatively flat in Santa Barbara County overall, representing a much better track record than the state and nation as a whole, according to an update presented to the Board of Supervisors on Tuesday.

But the county still will remain in the red tier, representing a “substantial risk” of disease transmission, due to its adjusted rate of new cases per 100,000, even though its rate of positive tests put it in the yellow or “minimum risk” tier and its health equity rate of positive tests is within the orange or “moderate risk” range, according to a report from Public Health Department Director Van Do-Reynoso.

The daily adjusted case rate was 4.3 per 100,000 population when the state released its figures Tuesday.

That was a drop from the 4.6 reported the previous week but still outside the 3.9 the county would have to reach and hold for two weeks in order to drop into the orange tier.

The testing positivity rate was 1.8, less than the 2 required to drop into the yellow tier, with the health equity rate at 2.8, still above the 2.2 threshold for yellow but well within the range for the orange tier.

Some of the county’s communities have experienced increases in their daily new cases in recent weeks — most notably Santa Barbara — while others like Isla Vista have shown a distinct decline.

But the county as a whole is doing better than the statewide average, which has shown a steep rise since the end of October, climbing to near 6,050 confirmed cases per day, according to graphs shown by Do-Reynoso based on data from Johns Hopkins University.

The numbers are even worse on the national level, where the United States continues to set new records for the number of daily new cases, climbing from less than 40,000 per day in mid-October to about 120,000 per day, according to data from Johns Hopkins University.

A graph comparing the 10 countries most affected by COVID-19 showed the new cases in the United States at well over double those of the other nine countries — Poland, Russia, India, the United Kingdom, Spain, France, Germany, Italy and Brazil.

"Worldwide, the virus is spreading more rapidly than at any other point," Do-Reynoso said. "The U.S. and Europe are both setting records for new confirmed cases, while South America, North Africa, India and other regions are coping with serious outbreaks."

Andy Caldwell, executive director of the Coalition of Labor, Agriculture and Business and the only member of the public to speak about the COVID-19 reports, was specifically critical of that graph.

“I was actually dumbfounded to see your staff did not bother to put Sweden on this chart,” Caldwell said, adding Sweden did not try to control coronavirus without developing herd immunity.

He also said the board has never questioned whether the governor and state public health officials are pursuing the wrong course in controlling the pandemic.

“Why, if the United States has the best health-care system in the world, are our cases going up when everyone else’s are going down?” Caldwell asked.

What you need to know for Wednesday, November 11