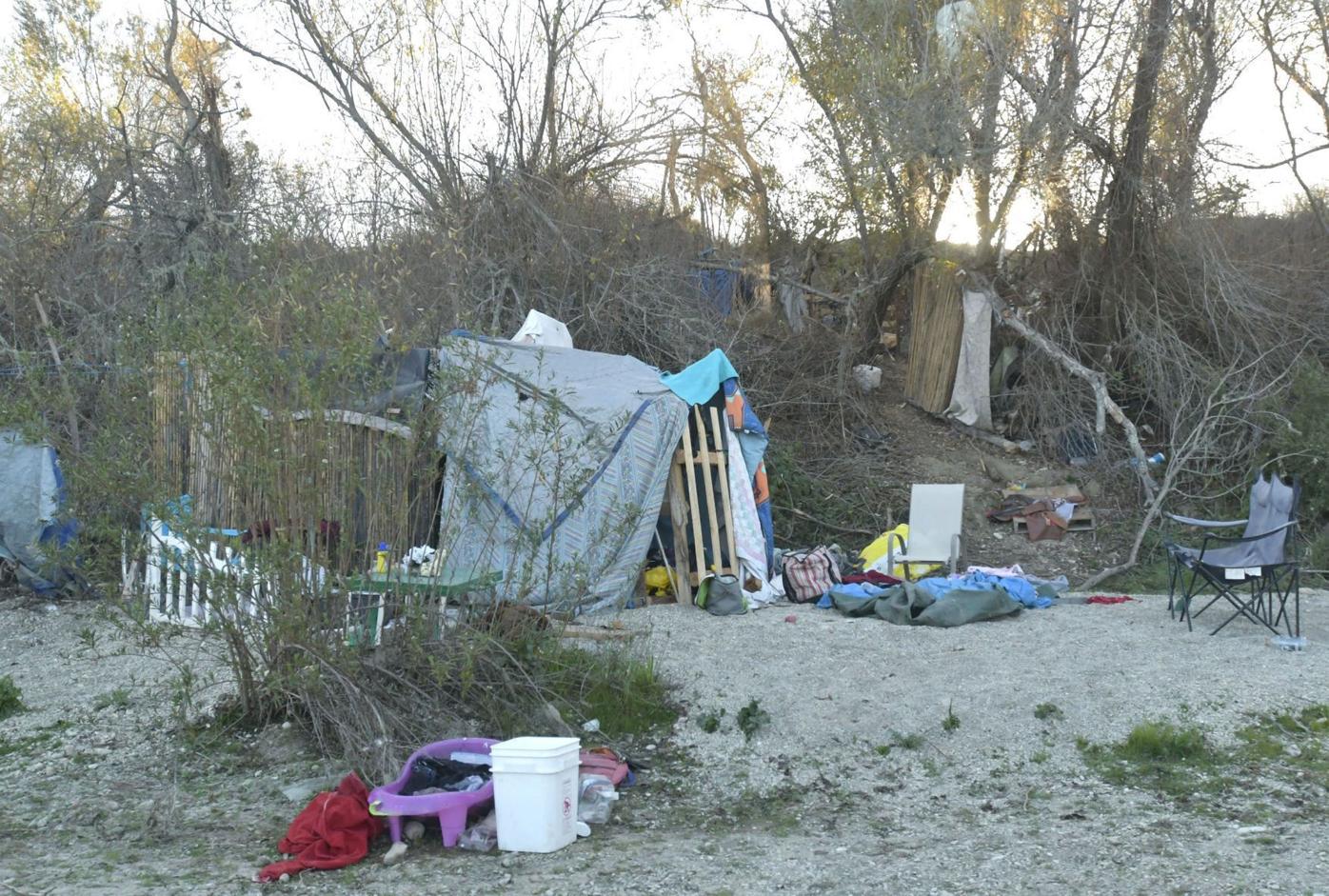 Makeshift shelters fill a homeless encampment in the Santa Ynez River bed east of Lompoc in February 2018 before the shelters and associated debris were cleared out. 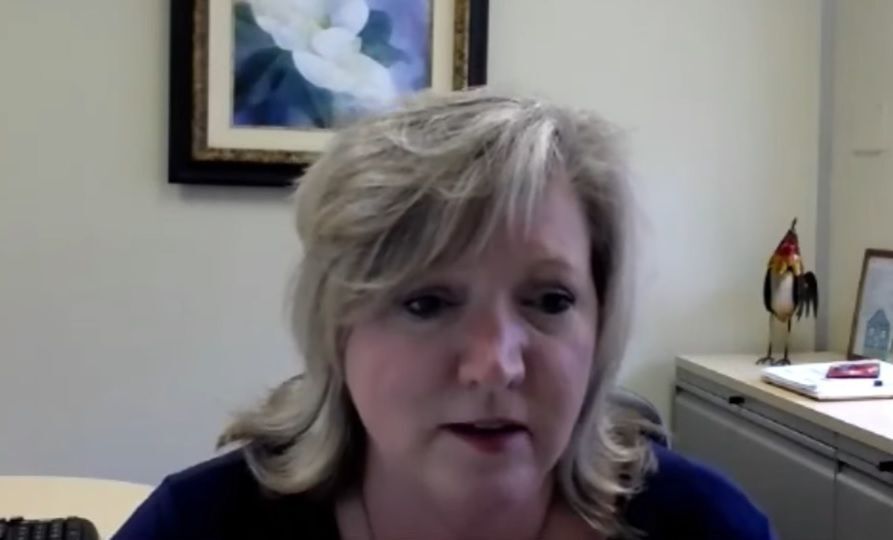 Kimberlee Albers, homeless assistance program manager for Santa Barbara County, tells the Board of Supervisors about the Encampment Resolution Strategy designed to eliminate 45 homeless camps over three years in this screenshot from the livestream of Tuesday's meeting. 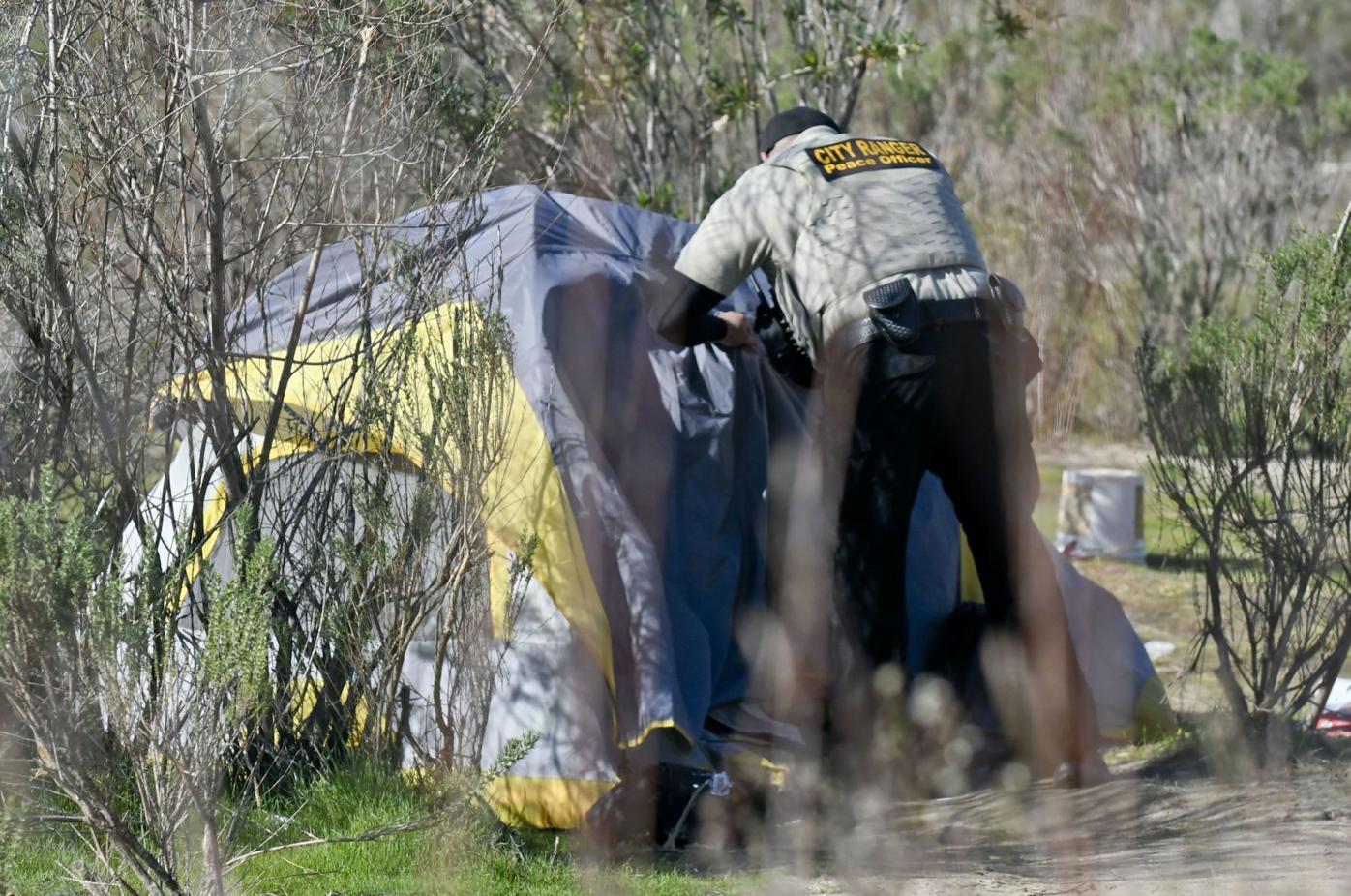 A Santa Maria city ranger checks a tent in a homeless camp in the Santa Maria River bed east of Highway 101 during removal of an encampment in January 2020. 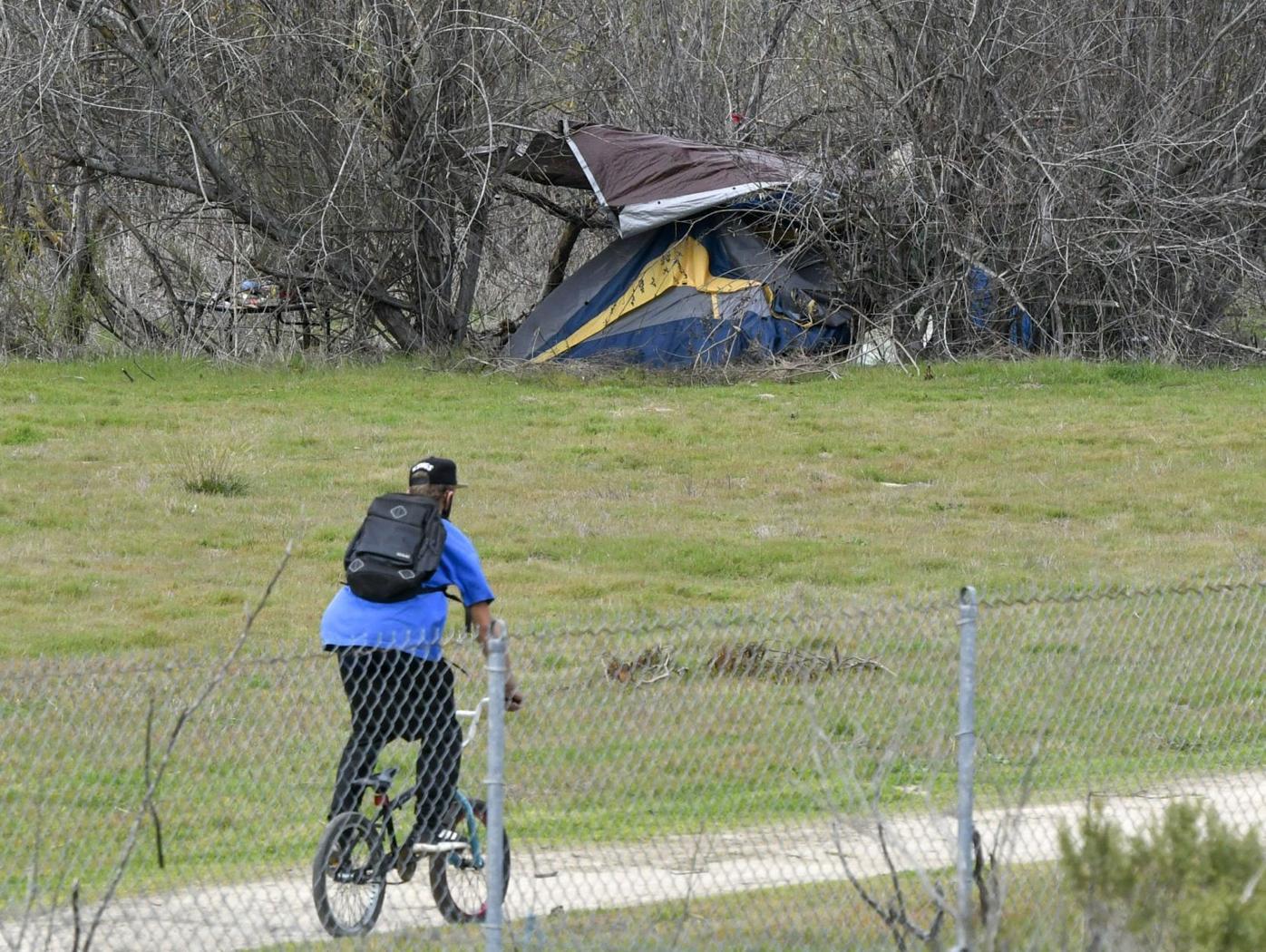 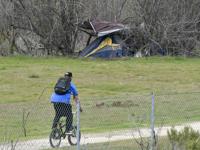 A cyclist rides along a path near a homeless camp at the edge of the Santa Ynez River bed beside Highway 1 on the north side of Lompoc in this photo from February 2021.

Makeshift shelters fill a homeless encampment in the Santa Ynez River bed east of Lompoc in February 2018 before the shelters and associated debris were cleared out.

A Santa Maria city ranger checks a tent in a homeless camp in the Santa Maria River bed east of Highway 101 during removal of an encampment in January 2020.

A cyclist rides along a path near a homeless camp at the edge of the Santa Ynez River bed beside Highway 1 on the north side of Lompoc in this photo from February 2021.

An Encampment Resolution Strategy with the goal of eliminating 45 homeless camps and getting 60% of their residents into alternative housing over three years was adopted last week by the Santa Barbara County Board of Supervisors.

Supervisors unanimously voted Aug. 31 to adopt the strategy and its accompanying protocol and to allocate the funds necessary to pay for it.

The strategy carries a price tag of more than $1.9 million, although the way the money would be spent was not fully supported by the entire board.

Fifth District Supervisor Steve Lavagnino said he is not convinced that performing outreach efforts at a homeless encampment is effective and would rather see more effort to get homeless individuals into temporary shelters and then surround them with services.

“I think we need to be way more aggressive on eliminating encampments,” Lavagnino said, advocating that the county use vacant properties it owns for temporary pallet housing like that used successfully in Isla Vista and now in Lompoc.

First District Supervisor Das Williams said each county department needs to report its vacant land that could be used for temporary housing.

In fact, county staff pointed out the success of the strategy and its accompanying protocol for dealing with homeless encampments will rely on that.

“The availability of alternate shelter is essential to consider closure [of an encampment],” said Dinah Lockhart, deputy director for the Housing and Community Development Division of the General Services Department.

Kimberlee Albers, the homeless assistance program manager, said the staff is actively looking for locations “behind the scenes.”

Williams also said the owners of every parking lot in the county need to step up and offer those spaces for temporary housing. He noted the funding is available; the only thing lacking is societal will.

“Don’t be more scared of the solution than you are of the problem,” he said.

Software designed to map homeless encampments and track data will add another $30,000 to the cost of the adopted strategy.

The team of representatives from Community Services, Public Health and Fire departments, homeless services providers and law enforcement then would evaluate homeless camps on a variety of criteria.

Those would include the threat to health and safety, proximity to residential areas, impacts on sensitive habitat and water quality, blocking public access to parks and right of ways, criminal activity and disruptive behavior.

Health and safety issues and the location and size of an encampment would be used to determine if the county should take any or all of four possible intervention actions — outreach with homeless services and case management; enacting temporary health and safety measures; cleaning the area of debris; and initiating closure and removal of the camp.

Debris removal costs for the three-year program are estimated at more than $1.1 million, at an average cost of $25,000 per cleaning, and storing personal property for camp residents is pegged at $300,000.

Lavagnino was concerned about taking three years to reach the plan’s goals, and he said there are some homeless people who like living as they do and won’t accept the offer of shelter.

But Hartmann said if a person can be moved to a shelter where they can lock their own door, it would change attitudes toward accepting such housing.

The majority of the board supported the strategy as presented.

“We have a hole in our bucket and we need to patch it,” said Chairman and 4th District Supervisor Bob Nelson. “An encampment is no place for any of our Santa Barbara County residents to live.”