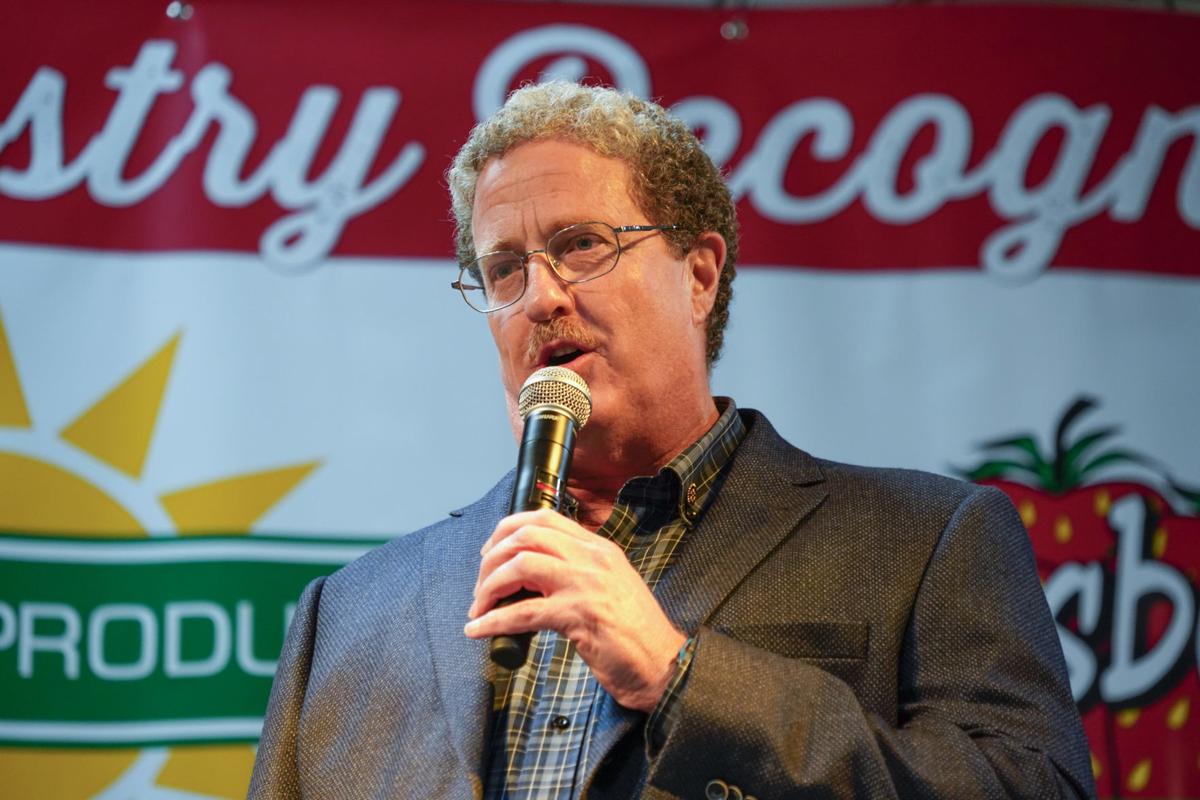 Andy Caldwell, of COLAB, speaks at the annual Strawberry Industry Recognition Dinner at the Santa Maria Fairpark on April 3. Caldwell is running for the 24th Congressional District seat against incumbent Rep. Salud Carbajal. 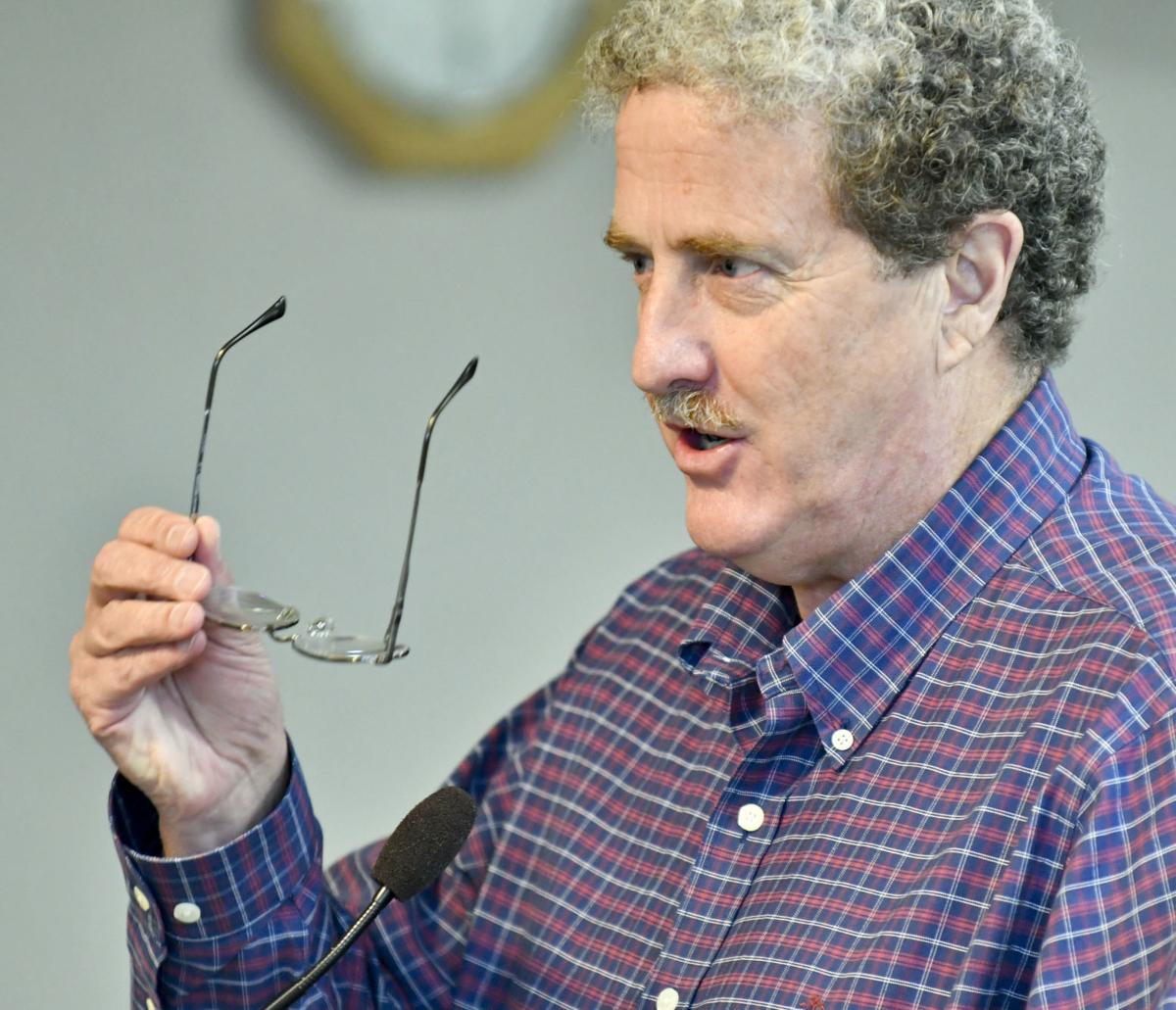 Andy Caldwell, of COLAB, speaks on Feb. 12 during the presentation of a report on the status of onshore and offshore oil and gas development to the Santa Barbara County Board of Supervisors in Santa Maria. On Monday, Caldwell said he will run for the 24th Congressional District seat against incumbent Rep. Salud Carbajal.

In an interview Monday, Caldwell — who is running as a Republican — said he aims to represent the district’s conservatives, moderates and independents.

The 24th District encompasses all of Santa Barbara and San Luis Obispo counties, along with a small part of Ventura County.

As the executive director of the Coalition of Labor, Agriculture and Business (COLAB), Caldwell is a familiar presence at local government meetings, where he advocates on behalf of business interests.

In recent months, Caldwell has appeared before the county Board of Supervisors and Planning Commission to speak in favor of proposed oil and gas projects and to urge officials not to move forward with joining a community choice energy program.

Caldwell, who also hosts a daily afternoon radio show on AM 1440, said he didn’t have political ambitions but was continually being asked to run by people who felt concerned about the direction the country was headed.

Carbajal and the rest of the Democratic Party have had a “shift to the extreme left” over the past two years, Caldwell said.

“I used to know Salud Carbajal as somewhat of a moderate but he’s gone off the deep end in the last few years,” he said. “I feel like these guys are doing party politics instead of the people's business, and their party politics is going to destroy our country.”

Caldwell said his primary goal as a legislator would be to work in the best interests of the Central Coast and set partisanship aside.

On health care, Caldwell said he will work to defeat the “Medicare for All” proposal, which has been endorsed by several leading Democratic presidential candidates including Sens. Bernie Sanders and Elizabeth Warren.

Medicare for All, which is also supported by Carbajal, would be unaffordable for the country, Caldwell said.

"Social Security and Medicare are going to go broke in the next 10 years," Caldwell said. Democrat proposals to fund healthcare for non-seniors is like “the captain of the Titanic not only striking up the band but booking more passengers after it struck the iceberg.”

A comprehensive plan on immigration is needed, Caldwell said.

Work could move forward soon on the proposed Orcutt Marketplace, a project that would serve as a gateway to the community from Highway 101 and…

“We need to secure our border, create a robust guest-worker program and fairly — emphasis is on the word 'fairly' — deal with the Dreamers,” he said.

Dreamers refers to undocumented immigrants who arrived in the United States as children.

A “fair” resolution for the Dreamers would provide them with some sort of residency status dependent on them not being on welfare and not having any criminal records, Caldwell said.

If and when the border is secured, Dreamers should get a path to permanent residence and eventually citizenship, Caldwell said.

“I value us being a nation of colonists, of immigrants but it’s got to be legal — not this free-for-all mess and it’s a dangerous mess we have at our borders,” he said. “If you don’t have a comprehensive solution, they’ll just keep coming.”

Caldwell said another priority would be reforming the Endangered Species Act.

Activists have exploited the law to lock up land and infringe on the rights of property owners, he said.

“It is just flat-out an abuse of authority and discretion to require a farmer to get permission to plant and plow their land if their property has been designated as part of the habitat for a particular species,” he said.

Caldwell noted that California has the highest poverty rate in the nation, according to federal data collected by the U.S. Census Bureau.

He said the way to combat poverty in the state and on the Central Coast is to remove regulations that stifle job creation.

Despite high name recognition in the area due to his years with COLAB, his radio show and his work as a columnist for local news organizations, Caldwell will have an uphill battle trying to unseat Carbajal.

According to the Cook Political Report, which analyzes House and Senate races across the country, California’s 24th District is solidly Democrat.

Carbajal has handily won both of his races for Congress, garnering 53.4% of the vote in 2016 against challenger businessman Justin Fareed; in 2018, he received 58.6% of the vote against Fareed.

Caldwell’s chance of snatching the seat away from Carbajal could largely depend on how much he can raise in early fundraising to catch up with Carbajal’s large war chest.

Carbajal's most recent Federal Election Commission filing states the congressman has around $1.3 million cash on hand for the 2020 race.

A steady stream of succulent seekers flowed through Growing Grounds Farm in Santa Maria on Saturday, looking for unusual and unique varieties …

According to OpenSecrets.org — a project of the nonpartisan Center for Responsive Politics that tracks federal campaign contributions — Carbajal’s fundraising for the 2020 election has outpaced the average House member.

During the 2020 election cycle, Carbajal’s campaign committee has raised over $760,000.

The average House incumbent raised around $522,000 during that same period.

After postponing a decision three months ago, the Santa Maria City Council on Tuesday will reconsider joining the Monterey Bay Community Power…

Andy Caldwell, of COLAB, speaks at the annual Strawberry Industry Recognition Dinner at the Santa Maria Fairpark on April 3. Caldwell is running for the 24th Congressional District seat against incumbent Rep. Salud Carbajal.

Andy Caldwell, of COLAB, speaks on Feb. 12 during the presentation of a report on the status of onshore and offshore oil and gas development to the Santa Barbara County Board of Supervisors in Santa Maria. On Monday, Caldwell said he will run for the 24th Congressional District seat against incumbent Rep. Salud Carbajal.