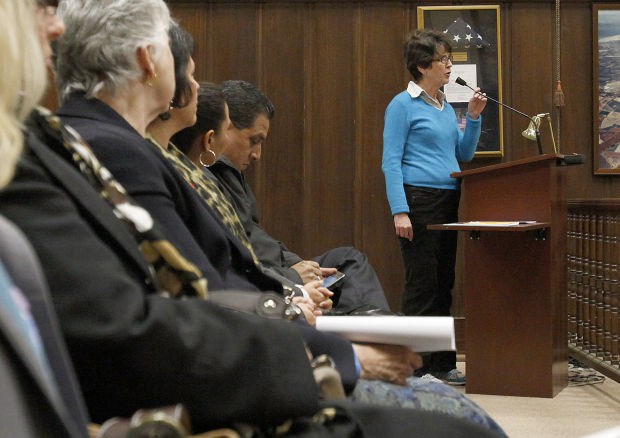 Jeannine Vanier addresses community members and the Santa Maria City Council on Tuesday about her concerns for a new ICE office on West Century Street. 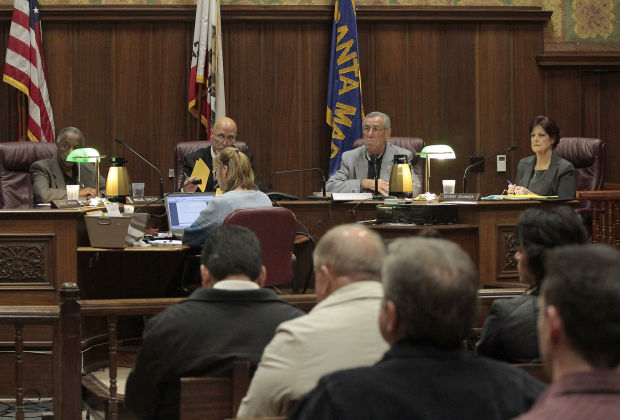 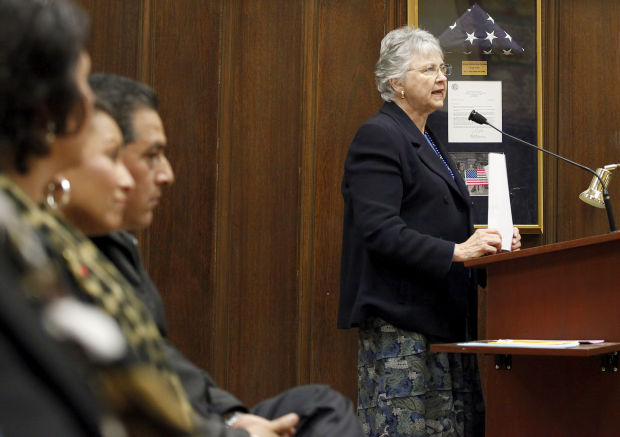 Santa Maria resident Suzanne Buhring speaks against the proposed ICE facility at a February meeting. She said: “This tremendous expenditure is a duplication of paperwork already done, (causes) unnecessary transportation and does not require a new facility that adversely affects over 400 homeowners’ property values.”

Jeannine Vanier addresses community members and the Santa Maria City Council on Tuesday about her concerns for a new ICE office on West Century Street.

Santa Maria resident Suzanne Buhring speaks against the proposed ICE facility at a February meeting. She said: “This tremendous expenditure is a duplication of paperwork already done, (causes) unnecessary transportation and does not require a new facility that adversely affects over 400 homeowners’ property values.”

National pressure against a proposed Immigration and Customs Enforcement facility in Santa Maria has come down on the city’s Planning Commission as the project heads toward the final piece of approval it would need tonight.

The City Council approved the second reading of a general plan amendment and zone change of the land the facility would be built on Tuesday evening with a vote of 4-1. Terri Zuniga dissented.

The Planning Commission’s meeting at 6:30 p.m. today has been moved to the Santa Maria Fairpark after hundreds of protesters packed the council’s meeting to discuss the zone change for the first time on Jan. 21.

Congresswoman Lois Capps, who represents Santa Barbara County, sent a letter to the acting director of the federal ICE bureau on Tuesday lamenting what she described as “extremely little outreach to local community members and community groups regarding this proposed new facility.”

More than 100 groups ranging from Central Coast United for a Sustainable Economy to Friends of Miami-Dade Detainees submitted letters to the city Planning Commission, laying out several reasons not to allow the facility’s relocation to Santa Maria.

“Increasing ICE’s presence in Santa Maria will only result in strengthening collaboration with ICE while eroding public safety and community trust,” the letter read.

The facility already operates in Santa Barbara County out of old trailers in the federal penitentiary in Lompoc. City Manager Rick Haydon said the office’s mission is to find undocumented criminals already incarcerated in Santa Barbara and San Luis Obispo counties and process their deportation.

The facility would be able to house up to 13 detainees at any one time for a maximum of 12 hours per person, according to planning staff.

Homeowners who live in the area spoke at the City Council meeting Tuesday, urging the council not to approve the zone change based on issues such as the facility’s proposed barbed wire fence and weapons storage area.

“This tremendous expenditure is a duplication of paperwork already done, (causes) unnecessary transportation and does not require a new facility that adversely affects over 400 homeowners’ property values,” said resident Suzanne Buhring. “My feeling is the city has an obligation to contact residents of the entire homeowners associations affected, rather than a handful on the perimeter, for notification.”

Others warned against the fear bringing ICE to Santa Maria could cause.

“This federal facility is beyond the control of the city of Santa Maria and despite Mayor (Alice) Patino's clear warning to ICE representative (Steven) Finn not to abuse the detainees, local farmworkers fear wholesale roundups and incarceration, and these farmworkers, through their arduous toil, are the people who essentially feed us,” said Walter Taylor, who also spoke during the meeting.

Councilmember Zuniga, the lone vote against the zone change on Tuesday, said she’s heard concerns from immigrants, farmers and homeowners on a range of issues related to the facility.

“I cannot support property owners’ rights over community members’ rights to live or recreate in our community feeling safe and unafraid,” Zuniga said. “I am certain (project developer Dan) Blough would be able to find a more appropriate tenant for that location.”

If the Planning Commission were to approve the permit for the ICE facility, it could be appealed to the City Council. Haydon said the item wouldn’t appear until at least the second council agenda after the appeal.

The Planning Commission will vote on the planned development permit for the proposed Immigration and Customs Enforcement facility at 6:30 p.m. today at the Santa Maria Fairpark. For more information, call the Community Development Department at 925-0951, ext. 244.

After hearing several hours of public comment opposing the relocation of an Immigration and Customs Enforcement facility to Santa Maria, the P…