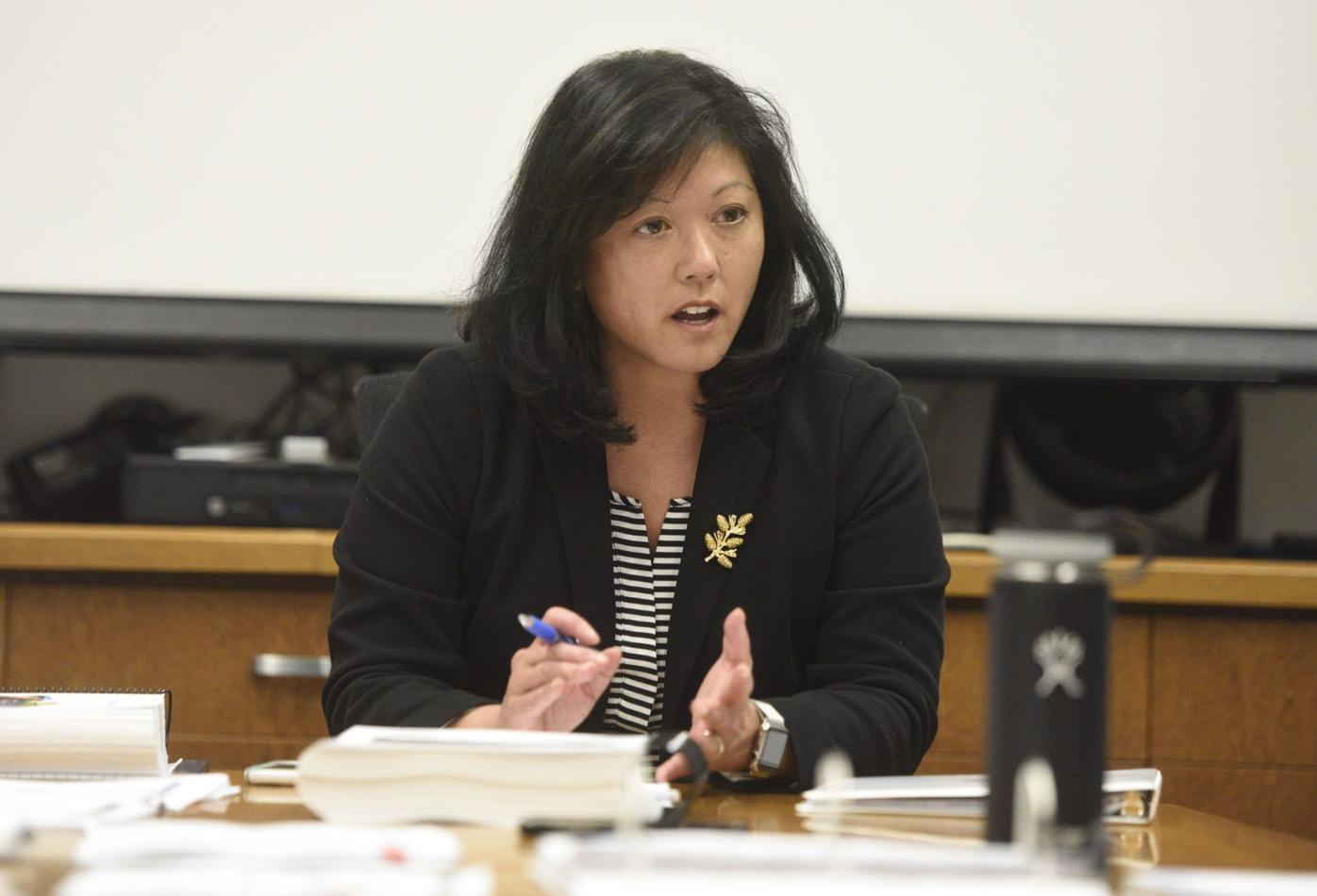 Santa Barbara County Executive Officer Mona Miyasato leads a discussion of budget personnel in 2017 when the county was facing possible layoffs in its Social Services Department. 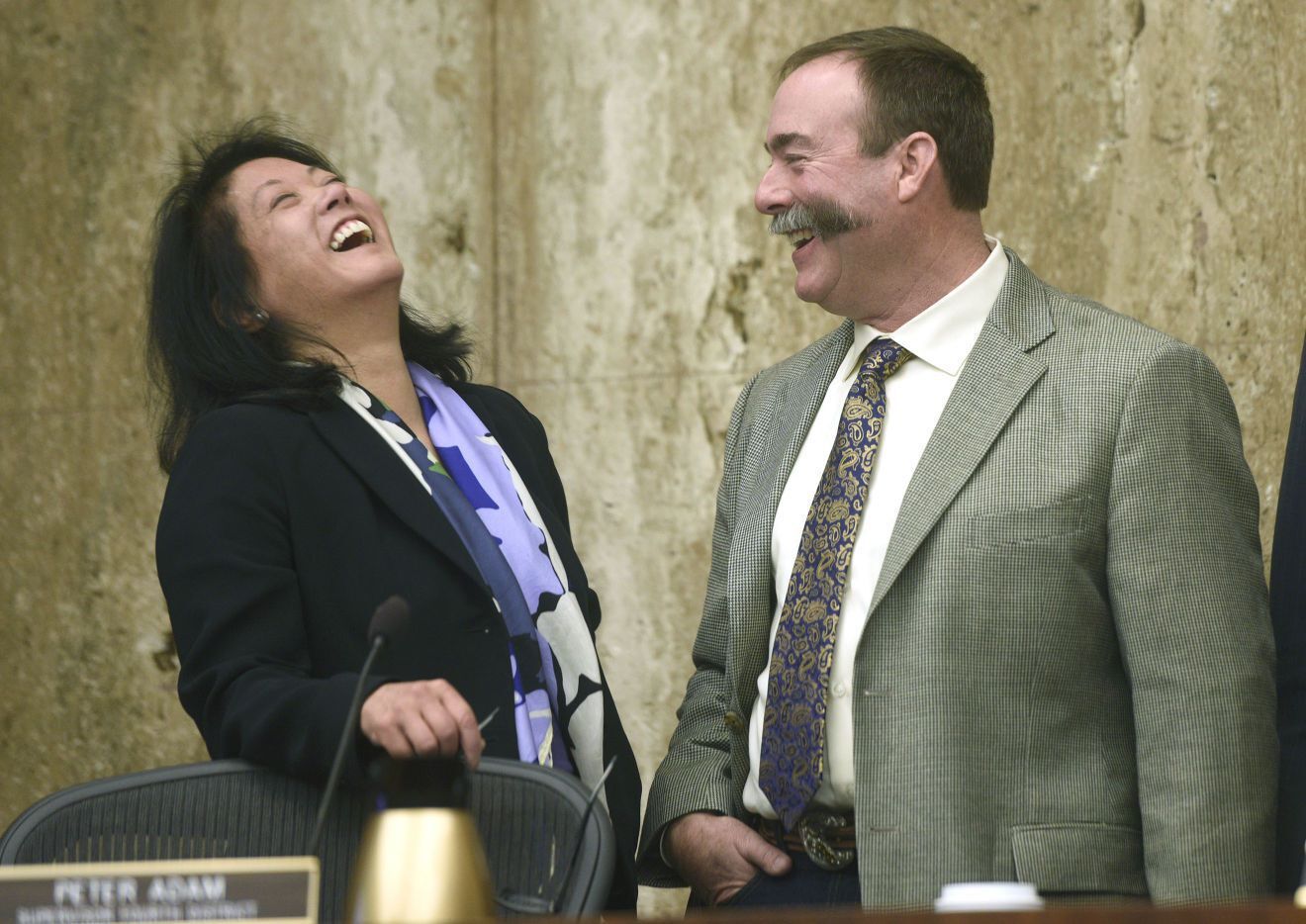 Santa Barbara County Executive Officer Mona Miyasato, left, and 4th District Supervisor Peter Adam share a laugh after he was named chairman of the Board of Supervisors in January 2016.

A social media post apparently critical of the Santa Barbara County Board of Supervisors’ intention to extend the county executive officer’s contract with a 7.4% salary increase prompted supervisors to sing the praises of Mona Miyasato at the Aug. 24 meeting.

But talk show host Andy Caldwell said the content of his post and his intention for posting it were misrepresented by the board chairman.

The extension of Miyasato’s contract for another four years, with a salary of approximately $309,193, plus benefits, was approved on a 5-0 vote.

Part of the administrative agenda, consisting of items usually approved in a single vote without comment, the contract was pulled for discussion by Board Chairman and 4th District Supervisor Bob Nelson to respond to the social media post.

Nelson agreed $309,000 is a lot of taxpayer money, although not the $400,000 reported in the social media post, but he said the amount is appropriate for people with her experience and skill sets.

“Mona leads an organization with approximately 4,300 employees, 22 departments, countless service areas and districts with a combined budget in excess of $1.3 billion,” Nelson said.

“Her pay is less than her peers throughout the state and less than many of the city managers and special district directors in our county who manage a fraction of the responsibilities,” he said.

Nelson said the increase is a fraction over the cost-of-living increase and recognizes that she has often taken less than authorized increases in the past.

But Caldwell, who is also executive director of the Coalition of Labor, Agriculture and Business and frequently addresses the board, said his social media post did not misrepresent Miyasato’s salary, noting the $400,000 he referred to included benefits as well as salary.

He said many times he has stated Miyasato is an excellent CEO and is being paid less than her counterparts.

“That’s not the point,” Caldwell said. “My point is these things are getting too high, especially with your pension crises. That was the only point here.”

The board received two written comments from other county residents objecting to the salary increase.

“I can tell you I’ve spent the last year worried to death other counties would be successful in recruiting our CEO away from us for considerably more money and have practically begged Mona to stay,” Lavagnino said.

He noted the county is in a different financial condition than in 2013 because of goals Miyasato set for the board as well as how camaraderie and civility she has brought into the board’s hearing room is exemplary.

Lavagnino said the average CEO salary in this area is about $800,000 or more.

“I can’t think of anybody better to be in this position,” he said. “She guided us through innumerable disasters [and] crises.”

He said he couldn’t think of any expenditure that would have a better return on the investment than Miyasato’s contract.

Second District Supervisor Gregg Hart agreed: “Mona is an outstanding leader who has really just a stellar statewide reputation. Everybody I talk to in county and state government immediately talks about Mona Miyasato and the job that she does representing the county of Santa Barbara.

“So we are really lucky to have her continuing to serve us and all the residents of Santa Barbara County. I just have nothing but deep respect and admiration to her personal commitment to public service, county government, the county family, and the tireless effort that she devotes to protecting the health and welfare and the economy of Santa Barbara County.”

Third District Supervisor echoed those comments, adding, “We are so lucky she stayed.”

First District Supervisor Das Williams noted the county government is in the midst of a major change in the way it operates to make it more user-friendly and to have departments acting with more unity of purpose.

He said the biggest factor in determining whether that change takes place is the employees themselves, but the second-biggest factor is whoever sits in the CEO’s chair.

“So there’s a lot at stake in whether Mona stays or not, and I hope the public understands that is a real thing … and Mona’s drive, skills and experience are exactly what we need for the challenges ahead,” Williams said.