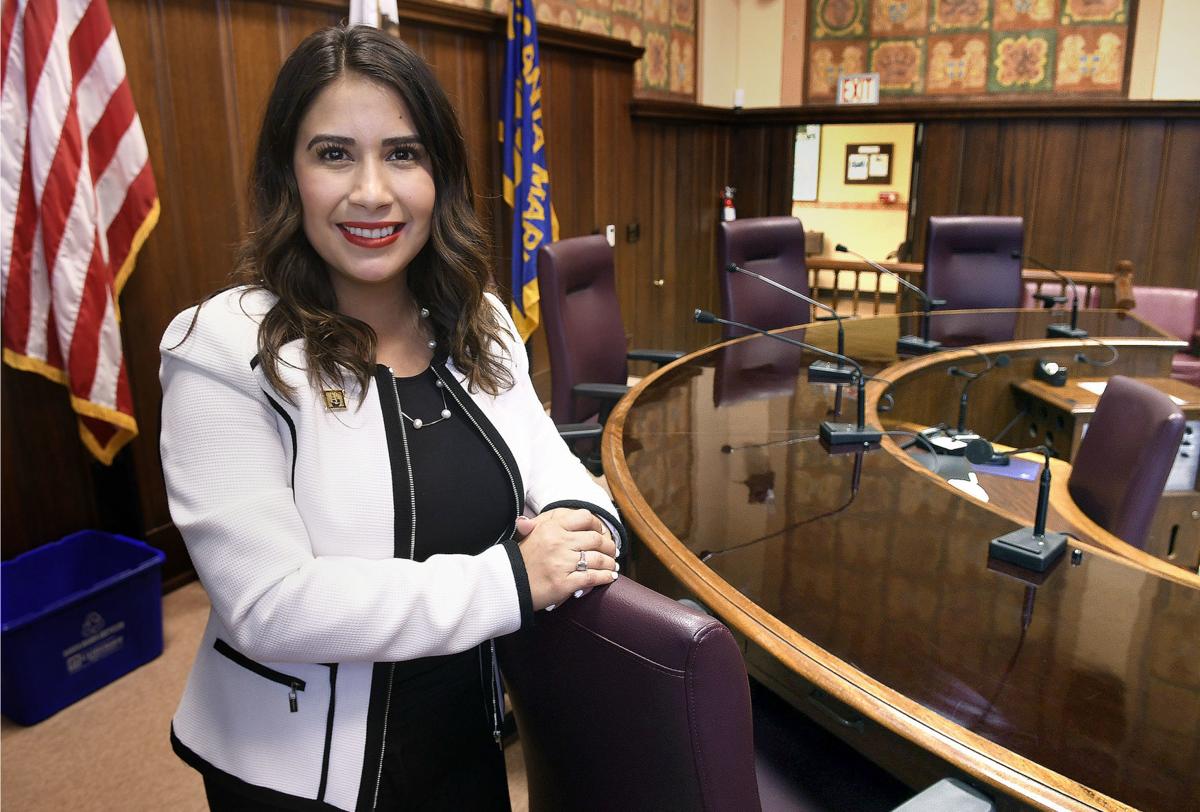 Santa Maria City Councilwoman Gloria Soto, shown at her chair in the council chambers at City Hall on Jan. 9, recently completed her first year in office. 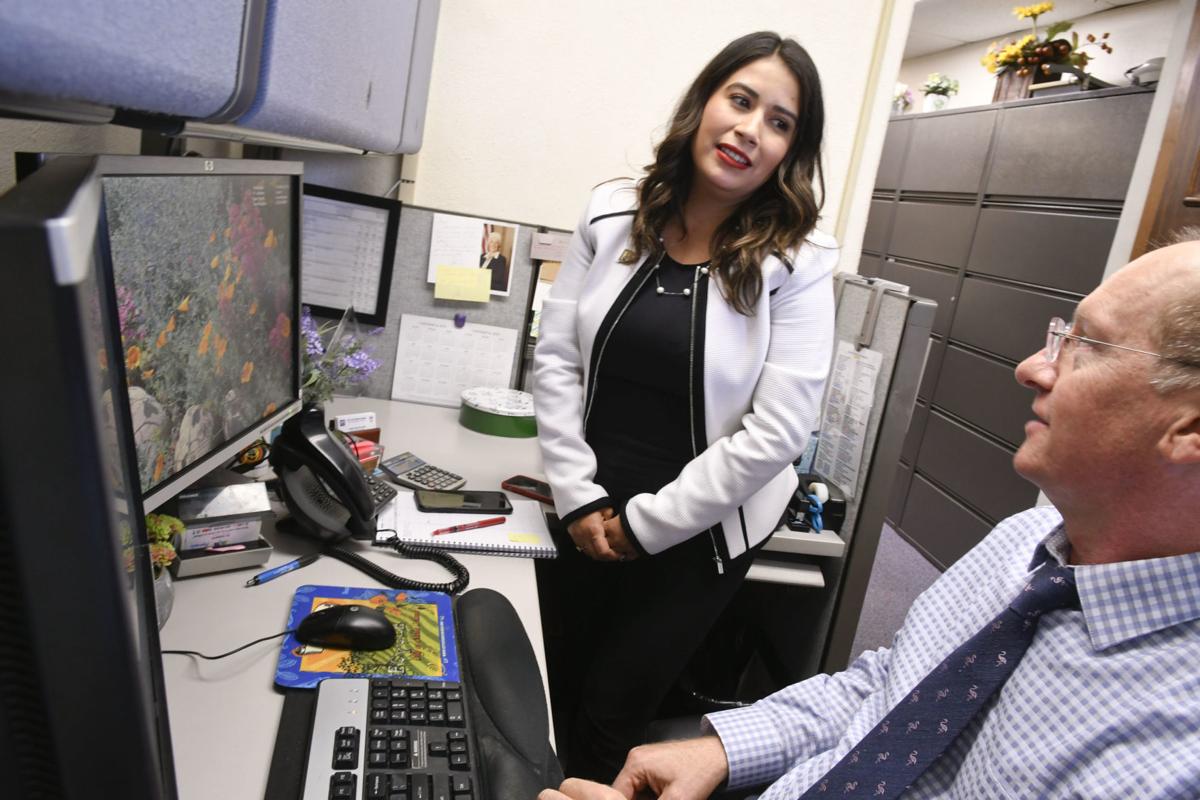 In November, Santa Maria City Councilwoman Gloria Soto was the sole "no" vote on a resolution to adopt a public art plan for the city after the council stripped away a permit fee that would have funded it.

It was one of numerous times the first-term councilwoman, who has carved out a position as the body’s most progressive member, found herself in the minority.

Such was the case when the council debated issues like tenant displacement assistance, expressing support for a 2020 ballot measure that would partially roll back two criminal justice reform measures and rent stabilization for mobile home parks.

“The most challenging part of this past year has been having to learn to work with people who may not agree with me on a lot of things,” Soto said.

The 30-year-old councilwoman, the only millennial serving on Santa Maria’s council, was elected in November 2018 after running on a campaign that argued the city needed to take bold measures to expand affordable housing and improve residents’ quality of life.

A daughter of immigrants, Soto was born and raised in Santa Maria.

After graduating from Pioneer Valley High School in 2007, she completed degrees at Hancock College and Chapman University before going to work for Planned Parenthood California Central Coast, where she now is a regional development manager.

“I’m really proud of the fact that I was part of the 2018 women of color wave that decided to step up and serve their communities by running for elected office,” she said. “It’s all about representation. It’s about seeing yourself reflected in your elected leaders.

“Even though there have been incredible role models like [former councilwomen] Hilda Zacarias, Terri Zuniga and our mayor, the first female mayor in this city, I haven’t seen enough people like me with my lived experience in these positions,” she said.

“As someone whose family has been impacted by the criminal justice system, by the tight housing rental market, by the high cost of health care — those lived experiences have really shaped my view of the world and my values.”

Lupita Rios, a Hancock College student who worked with Soto on her 2018 campaign, said part of what motivated her to dedicate time working on her first campaign was seeing a candidate she felt addressed issues vital to her.

“The average age in the city is 29,” Rios said. “There was no other person like Gloria running for City Council that we had seen before. I remember reading about City Council growing up, but there was never someone I felt represented me or my community.”

In her first year on the council, Soto and her colleagues have taken votes to enroll the city in a community choice energy program, revamp the city’s “model lease” program for mobile home parks and establish a permanent ordinance regulating the housing of H-2A farmworkers in residential areas.

“For me, it was really important to make sure that our H-2A farmworkers were able to live within our city limits, be able to enjoy our amenities, given that they are contributing to our economy,” Soto said.

The ordinance adopted by the council requires a discretionary permit for housing more than six H-2A farmworkers in a single-family home without imposing local restrictions on the use of medium- or high-density residential dwellings.

“I feel like we made some progress but still got stuck on some issues,” Soto said, saying the issue of tenant displacement assistance has been left unresolved.

In September, the council discussed the possibility of developing an ordinance that would require payment to renters in the event their homes were transitioned to house H-2A farmworkers.

Ultimately, the council asked city staff to look into the development of a voluntary program where growers commit to providing financial assistance to affected residents — a move opposed by Soto, who felt there needs to be a legally enforceable way to ensure residents would not be left high and dry.

“It’s something I think we should revisit," she said. "I know that the majority of the council do not want to see residents being displaced due to H-2A housing, but I think our ideas as to how we’re going to prevent that from happening differ.”

Soto said among the votes she’s most proud of is the decision to join the Monterey Bay Community Power Authority, which was narrowly approved by the council on a 3-2 vote in August.

Pacific Gas and Electric Co. will continue to bill residents as the power is transmitted using the utility’s infrastructure.

“I was a big champion of that, and it was so neat to see it come to fruition,” Soto said.

Soto said votes like those on Monterey Bay Community Power demonstrated the importance of having community participation in local government.

“Local government has such a direct impact on the lives of residents,” she said. “More so than what happens at the state or federal level, at times.”

“It was gratifying to be able to work alongside my colleagues coming to an agreement [on community power energy] that looks out for the best interests of our residents,” she added. “And we did just that.”

Santa Maria City Councilwoman Gloria Soto, shown at her chair in the council chambers at City Hall on Jan. 9, recently completed her first year in office.