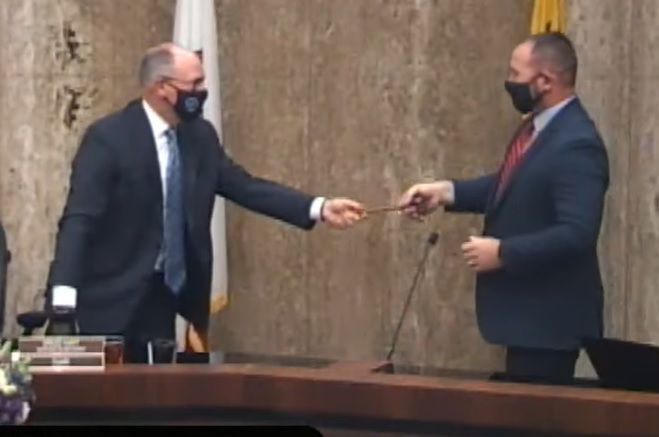 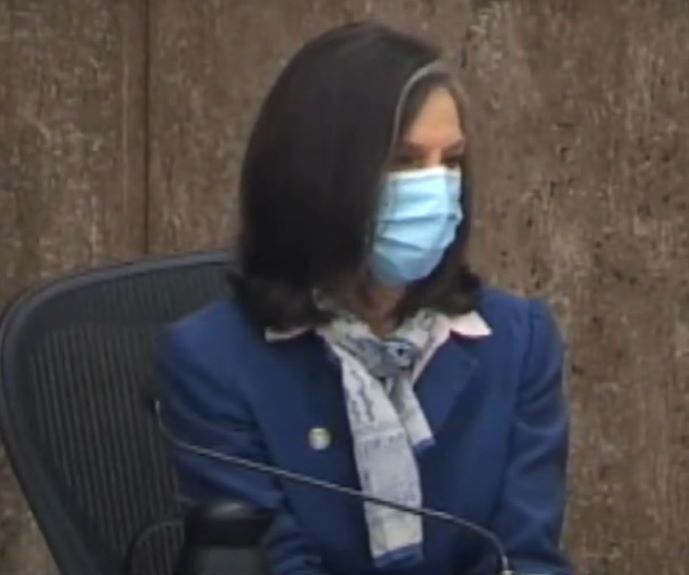 Santa Barbara County 3rd District Supervisor Joan Hartmann listens as a brief biography is read Tuesday prior to her election to serve as vice chair of the Board of Supervisors. Hartmann won re-election to her seat in the March 3 primary.

In his first meeting as 4th District supervisor Tuesday, Bob Nelson was elected chairman and 3rd District Supervisor Joan Hartmann was elected to serve as vice chair of the Santa Barbara County Board of Supervisors.

Nelson, who joined the board after he ran unopposed for the seat, and Hartmann and 1st District Supervisor Das Williams, who were re-elected in the March 3 primary, had already been sworn in before Tuesday’s meeting, said County Executive Officer Mona Miyasato.

The vote to make Nelson chairman was somewhat symbolic, as new supervisors have, in recent years, taken over the duties in something of a trial by fire.

Second District Supervisor Gregg Hart, the outgoing chairman, handed over the gavel, noting that now the board got “to model for our country what a peaceful transition of power looks like.”

“I think you are the right person for the right job at the right moment,” Hart told him.

Nelson said he hadn’t been nervous about serving as chairman until that point.

“What kept me up at night was the 75 news conferences [Hart conducted],” Nelson said, noting that worked out to one every five days.

He thanked many of those involved in him becoming a supervisor and moving into the role of chairman, including wife Jamie, whom he called “the secret of my success,” and Peter Adam, who chose not to seek re-election after two terms and Nelson described as his mentor.

“I really hope my service is part of Peter’s legacy in this county,” he said, adding his focus will be on county infrastructure, fiscal accountability, providing superb service to county residents and advocating for the businesses of the North County.

“We need to say yes to as many things as possible to help the people of our community,” Nelson said.

Hartmann told Nelson he is extremely hardworking and focused and she appreciated his humanity and caring.

“You’ve got your hands full,” 5th District Supervisor Steve Lavagnino told Nelson, adding, “You are a focused individual, you have a goal and it doesn’t matter how long it takes you to get to that goal.”

Williams said he was confident the board can work together to serve the citizens and gave Nelson a reminder of the importance of that at this moment in time.

“I think there may have only been one other time in American history that it’s as important to show that we can be human beings and Americans before idealogues.”

Hart was also praised by his fellow board members for his job leading the board during the difficult year of COVID-19.

“Your personality fit what we needed this year,” Lavagnino told Hart, adding the board got him a gift card to REI, an outdoor recreational equipment retailer, so he can get outside and relax.

“I want to express how blessed this board has been by your chairmanship,” he said, adding that Hart “gets that things have a long life span” and sometimes changes his mind about issues, which he said is “unheard of in this day and age.”

A short video also was played with various community leaders and county department heads expressing their appreciation to Hart for all his work as chairman.

Santa Barbara County 3rd District Supervisor Joan Hartmann listens as a brief biography is read Tuesday prior to her election to serve as vice chair of the Board of Supervisors. Hartmann won re-election to her seat in the March 3 primary.