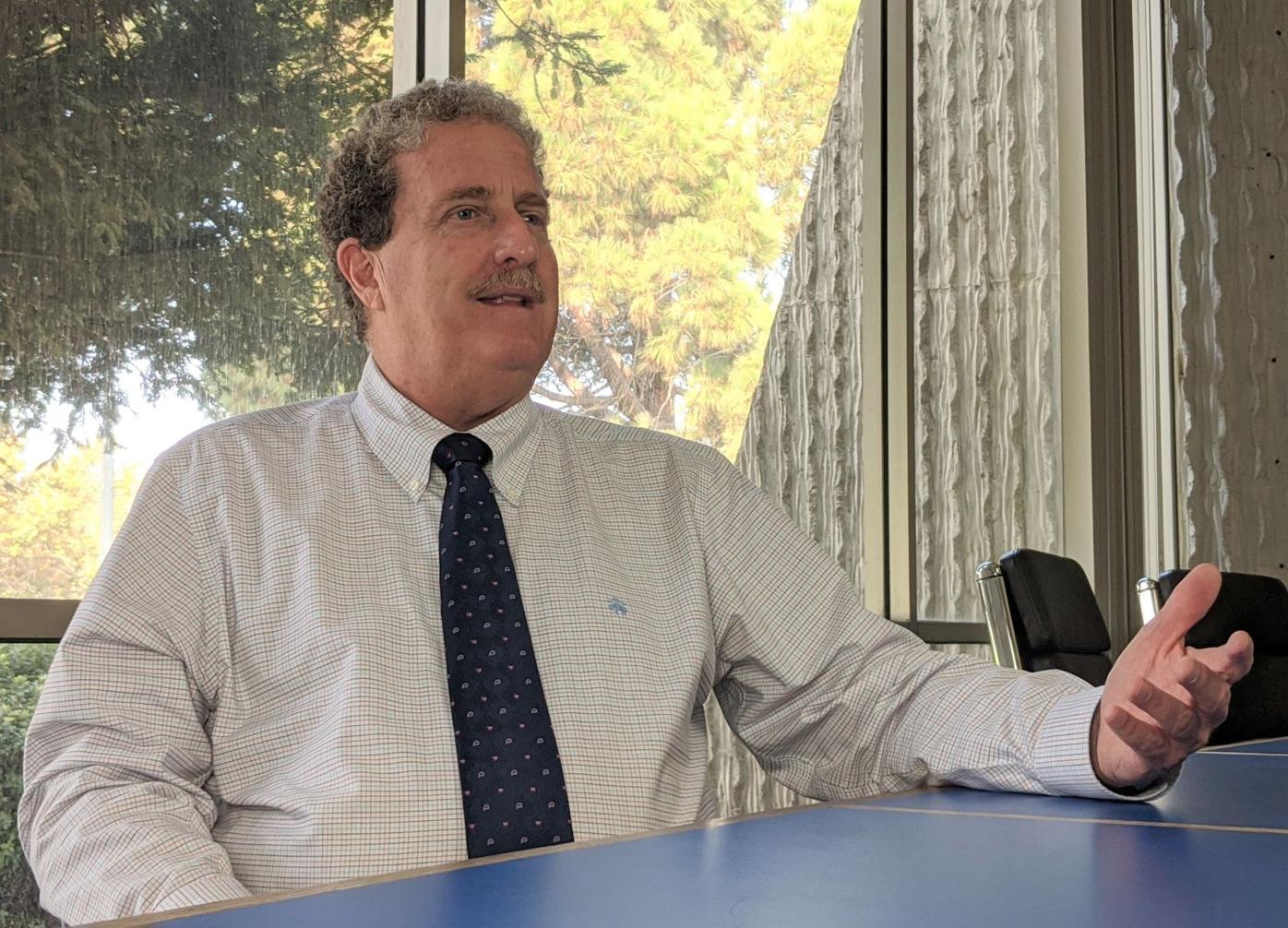 Republican Andy Caldwell talks about his campaign to take the 24th Congressional District seat away from incumbent Democrat Salud Carbajal during a recent interview. 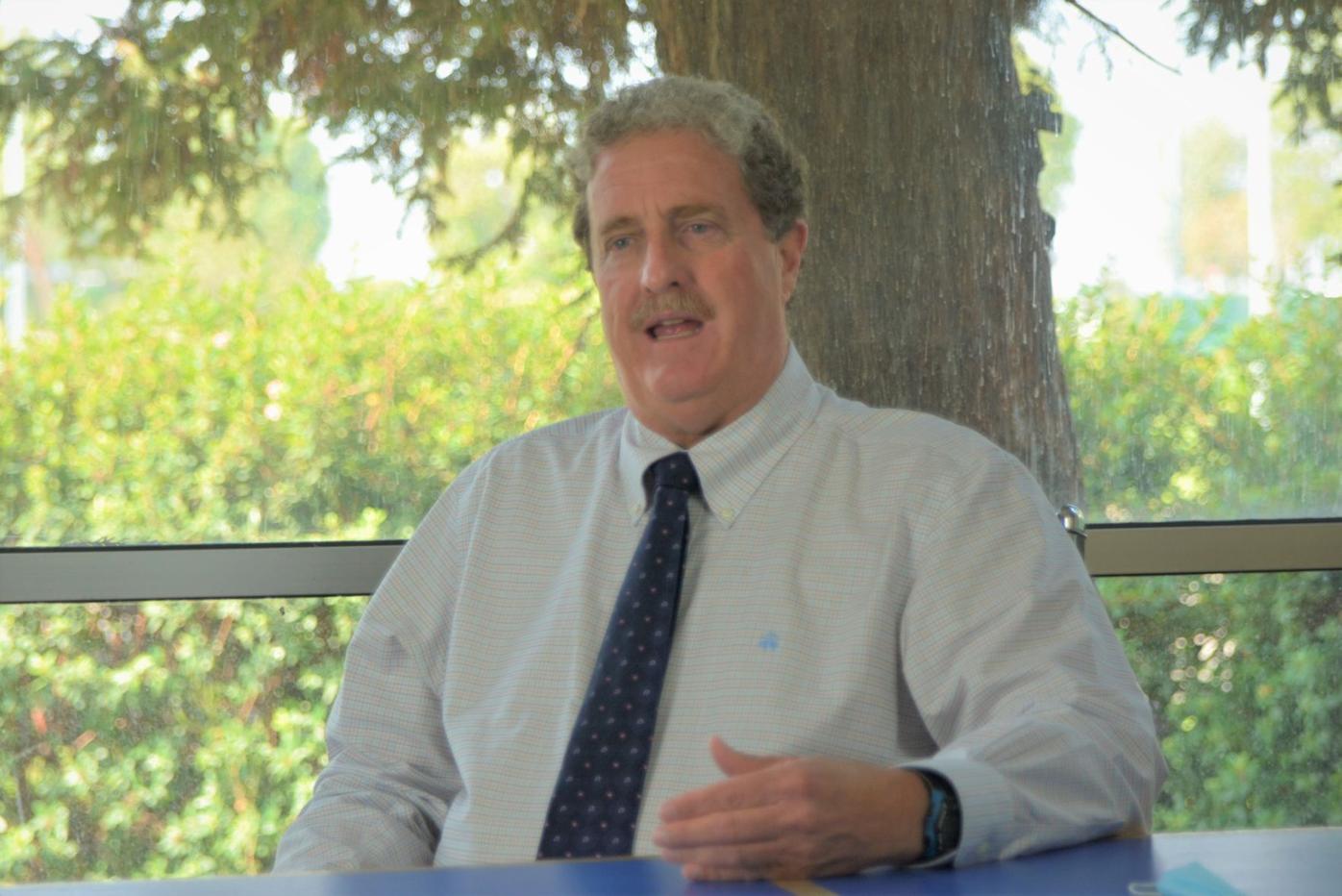 Andy Caldwell, Republican candidate for the 24th Congressional District seat currently held by Democrat Salud Carbajal, talks about the government's response to COVID-19, the cause of California's wildfires and economic recovery during a recent interview. 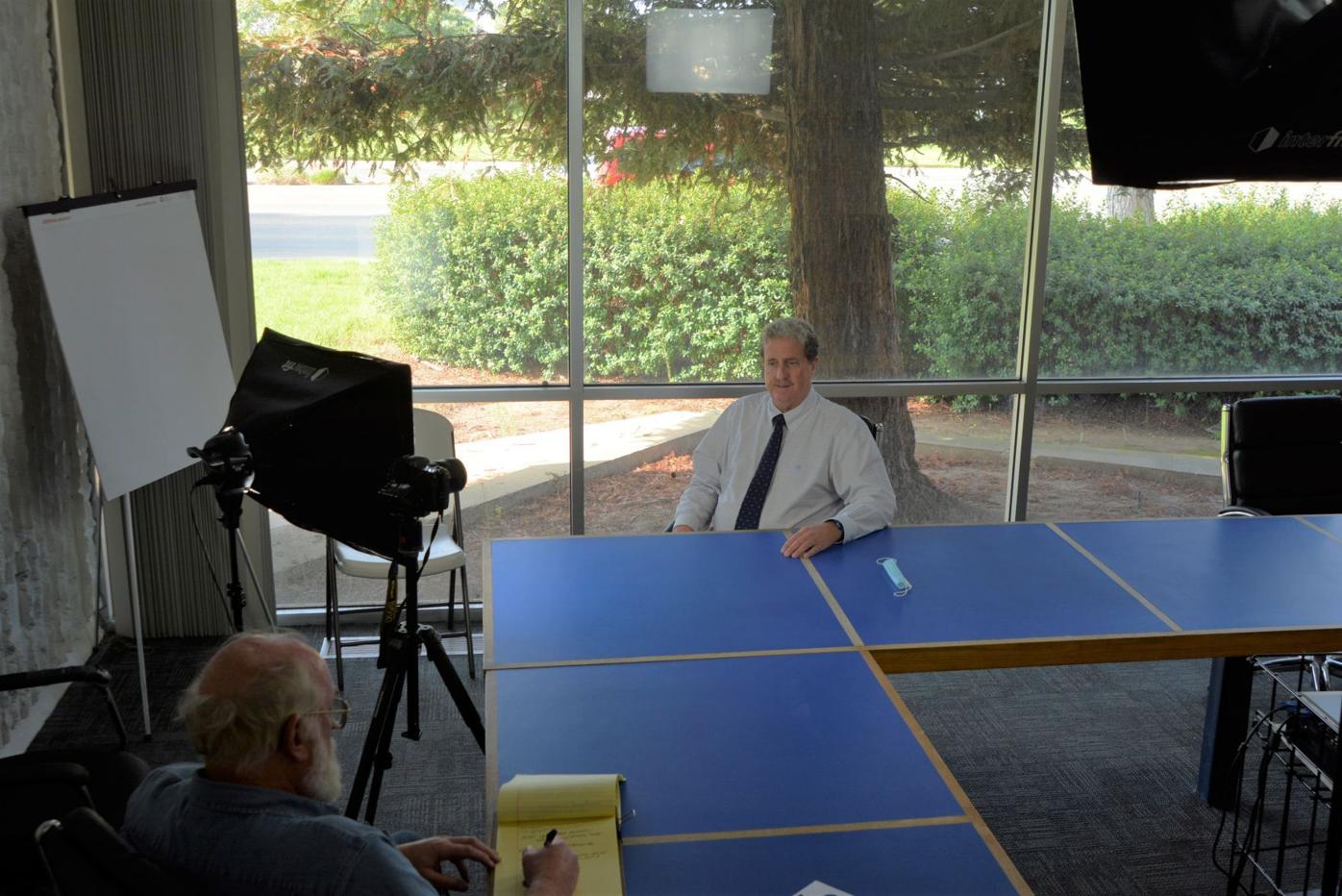 Republican Andy Caldwell responds to questions about the COVID-19 pandemic, California's wildfires and economic recovery during a recent interview at the Santa Maria Times office. 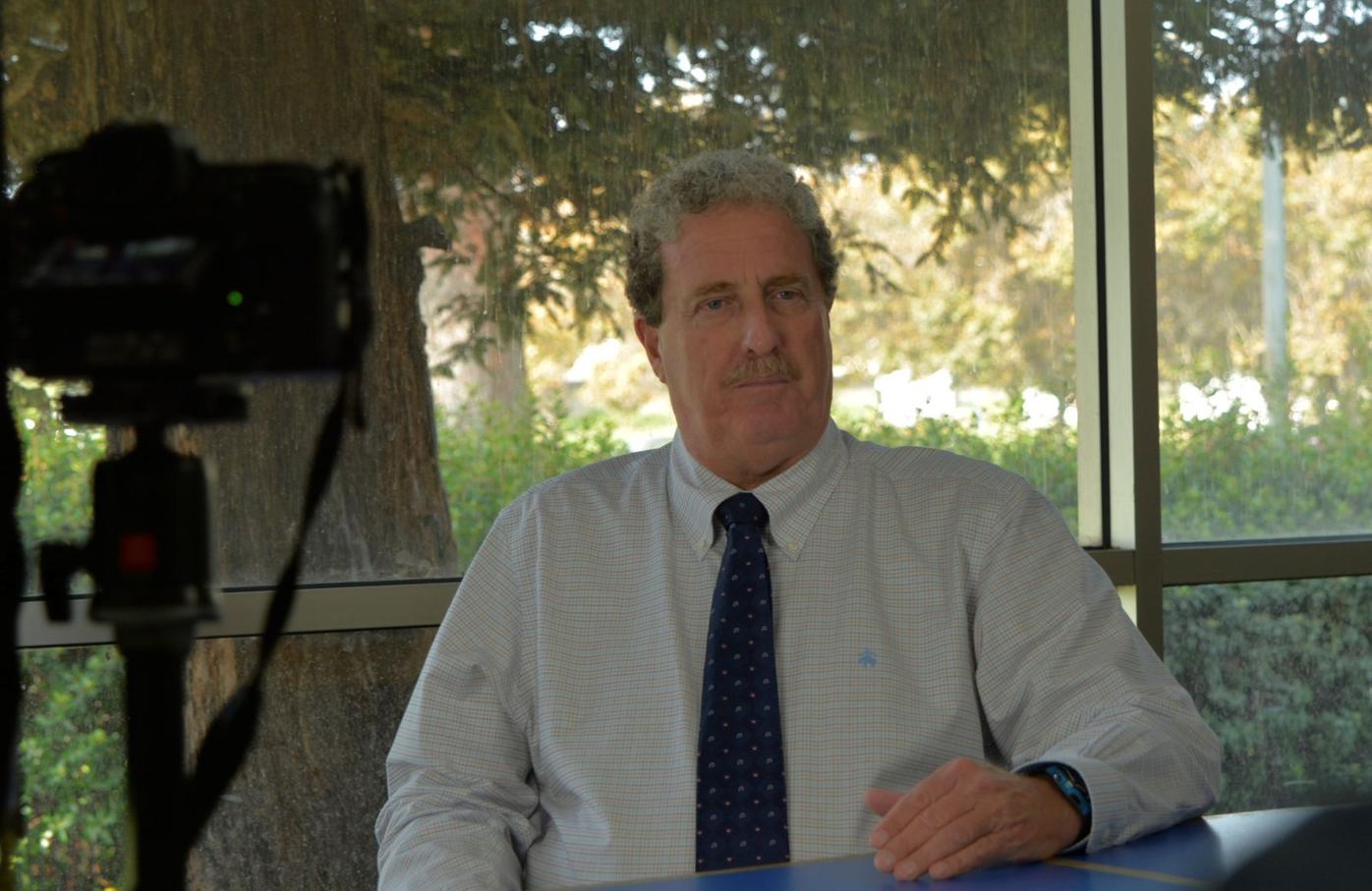 Andy Caldwell, the Republican candidate for the 24th Congressional District seat, is critical of the government's response to COVID-19, blames California's wildfires on poor management of national forests and says reducing the deficit and national debt are key to economic recovery.

Editor's note: This is one in a series of two profiles on the candidates running for the 24th Congressional District seat in the Nov. 3 election.

Good jobs, affordable housing and more water for Santa Barbara County and its neighbors are still among the top priorities for 24th Congressional District candidate Andy Caldwell, a Republican who is challenging incumbent Democrat Salud Carbajal in the Nov. 3 general election.

He also promises to represent the people, not his party, with a rural, working-man’s point of view rather than what he described as the big-city elitist attitude of those who have previously represented this area in Congress.

But things have changed since March 3 — the country has been hit by the coronavirus pandemic, and now it seems all of California is burning amid the worst wildfire season on record.

Caldwell is critical of how the nation and state responded to COVID-19, saying it has not been effective, unnecessarily sent the economy reeling and caused people to die unnecessarily from other causes.

He says the federal deficit and national debt are one of the biggest problems facing the country today, and reducing those is central to economic recovery.

He is also critical of how the federal government for decades has managed national forests, which cover much of California, setting the stage for devastating wildfires.

When it comes to the coronavirus pandemic, Caldwell said he doesn’t think the federal government should have provided economic stimulus funds to people without having a way to pay for it, and he wouldn’t support another one for the same reason.

“The states that are on overdrive kill mode should have to pay for that,” he said.

He said at the start of the outbreak, the state didn’t move fast enough to secure N-95 masks and didn’t protect the most vulnerable population in nursing homes.

“Congress should have made [personal protective equipment] available to the most vulnerable — and we know who the vulnerable are because it hit other countries first,” he said.

Caldwell said the medical community developed a “single-function objective bias” that focused on COVID-19, shut down doctors’ offices and clinics and halted all routine procedures.

As a result, a lot of cancers didn’t get diagnosed and those with cancer didn’t get surgeries, which he said resulted in the deaths of 34,000 people who wouldn’t have died if they had received timely diagnoses.

He said because the government shut down small businesses, while leaving the big discount and grocery chains open, the money that was spent at those stores went out of the area, and small businesses are now facing bankruptcy.

“We should be encouraging people to resume normal lives while practicing social distancing and hand washing,” Caldwell said. “We should open up the schools so kids can get an education and parents can get back to work.”

The wildfires that are charring California, as well as other states, are the result of policies pursued by the U.S. Forest Service as well as state and local fire protection agencies for decades, Caldwell said.

“These forest fires are due to nothing else but poor management,” he said. “This has absolutely nothing to do with climate change.”

Caldwell said regulations prohibiting thinning, logging and controlled burns encouraged an overabundance of trees unable to get enough sunshine and water, leaving them weak and susceptible to diseases.

“What did they think would happen?” he asked.

“Even after a fire starts, they have to get a permit to get equipment in there to create fire breaks,” he said.

His solution is to return to science-based management to develop healthy forests with 100 trees per acre and no undergrowth, which he said would free up water that’s currently sucked up by forests.

Caldwell said he’s committed to protecting Social Security and the defense budget, but that will only be possible by reducing the deficit and the national debt.

“We have got to increase economic stability by bringing manufacturing jobs back from China,” he said, blaming their loss on government policies that make it harder and more expensive to do business.

He also said state and county environmental protection and energy policies have driven out industries that provided jobs, economic stimulus and government revenues.

“So all they did was shift the environmental impact,” he said. “They didn’t eliminate it.”

Caldwell said although the area encompassed by the 24th Congressional District has always been represented by “urban elite” who have voted the party line, he’ll bring a “rural, working class” attitude to the job but won’t always vote along party lines.

“I want to represent everybody,” he said. “I’m going back to Washington to represent the people, not the party.”

“I’ve lived in this region for 52 years,” Caldwell said. “I’m a product of it. People who want change have the opportunity to vote for meaningful change.”

Andy Caldwell, 62, said he spent half his life as a registered Democrat before becoming a Republican.

He has lived in Santa Barbara County since he and his mother moved to Lompoc when he was 10.

He graduated from Lompoc High School and earned a bachelor’s degree in social sciences from UC San Diego.

He was a laborer at the Sinton & Brown Feedlot in Santa Maria, then became the industrial relations and safety manager at Union Sugar.

He founded the nonprofit Coalition of Labor, Agriculture and Business, or COLAB, in Santa Barbara County in 1991 and later helped similar organizations get started in San Luis Obispo, Ventura and Imperial counties.

He is a frequent public speaker before boards of supervisors and planning commissions as well as at special state, county and city meetings, advocating for for living-wage jobs, a diversified economy, governmental transparency and efficiency, less onerous regulations, private property rights and common-sense solutions to problems

More information about his platform, including videos about his positions, are available at https://andycaldwell2020.com.

What is the 24th District?

The 24th Congressional District encompasses all of Santa Barbara and San Luis Obispo counties plus a small portion of Ventura County and is heavily Democratic in voter registration.

What you need to know for Monday, September 21