Two traditional methods of preventing and controlling wildfires are so mired in controversy that getting their use approved is difficult and, if they are approved, opposition sometimes brings them to a halt.

Opponents say they don’t work, are a waste of money and do more damage to the environment than the fires themselves.

Ironically, both sides cite the Thomas fire as evidence to bolster their positions.

As a result of devastating wildfires in recent years, state legislation has made it easier to get approval for prescribed burns, which Santa Barbara County Fire Department has traditionally used and wants to use more.

This year, the department has been burning brush and organic debris around Lompoc and plans to do more, including at La Purisima State Park, using a recently received $2.23 million state grant.

“Los Padres National Forest is 2 million acres of land, so to clear out all the dead stuff would be impossible,” said Jimmy Harris, the Los Padres fire chief. “We do a lot of that work in the urban-rural boundary. We focus on values at risk, mainly communities and infrastructure.

“We do some controlled burns, mainly slash piles, because we are limited by humidity, wind and air pollution concerns,” he added, noting prescribed burns can only be done when weather conditions are right and several air pollution control districts give the OK based on air quality.

But he also admitted the amount of air pollution from a prescribed burn is relatively small compared to that produced by a wildfire.

“The smoke goes in the air in a wildfire, and it doesn’t ask permission,” he said.

County Fire also plans to use its state grant money to cut fuel breaks around communities at risk, like Mission Hills, and along the ridgelines separating the Los Alamos and Lompoc valleys.

Except for those carved out when fighting wildfires, virtually no new fuel breaks have been cut in decades because of opposition over environmental and aesthetic impacts.

“We aren’t cutting new fire breaks, but we are maintaining those that exist,” Harris said. “A lot of environmental groups say they don’t work [and leave] a mark on the environment. That’s not true in my experience. … Time and time again we see fire stopped at the fuel breaks.”

Usually carved along ridgetops using bulldozers, fuel breaks that are cut before a wildfire erupts are created in an environmentally responsible manner, which is not the case when fire breaks are cut while a wildfire is burning, Hazard said.

“We do an environmental analysis whenever we do a project,” he said. “We spend a significant amount of energy and resources to address the concerns of the environmental groups.

“When the fire is burning, there may be 30 dozers cutting line without any thought to environmental issues.”

Hazard put the effectiveness of fuel breaks at 50%, noting they won’t always stop a wildfire but they will reduce its intensity and slow its progress.

Both he and Harris said fuel breaks provide a safe zone for firefighters, are a place to stage engines and set up water tanks, and provide a starting point for setting backfires.

“The Thomas fire burned two weeks before they could mount a direct attack,” Hazard said. “It was stopped by the Camino Cielo fuel break that was cut in the 1970s. That was the second time it was used to successfully stop a wildfire.

Los Padres ForestWatch is among the organizations opposed to prescribed burns and fuel breaks.

The nonprofit organization formed in 2004 is dedicated to protecting and restoring the forests, chaparral, grasslands, rivers, wildlife and wilderness on public lands along the Central Coast through community outreach, scientific collaboration, field work and research, lobbying and litigation.

“Vegetation management has to be done at the home,” Baker said, which means fire-hardening structures and creating defensible space, although he said there are uses for fuel breaks right around communities.

But out in the wildland, he said, they don’t stop wildfires or prevent homes from burning.

“Fuel breaks do not do any good because the embers move over them and the fires move through them,” he said, noting embers can blow as far as 5 miles ahead of the fire front. “The Thomas fire burned over 70 miles of fuel breaks between Ventura and Santa Barbara.”

He said fuel breaks may be useful for igniting backfires, but he refuted the theory of fuel breaks as safe zones.

“In extreme wind-driven fires, firefighters are not being placed in these fuel breaks because it’s dangerous, frankly,” he said.

Prescribed burns are opposed by ForestWatch because “they may be causing more ecological damage than people realize” and, like fuel breaks, don’t stop wildfires.

“Our region is mostly coastal sage scrub and chaparral,” Baker said. “Chaparral consists of native shrubs that … have very unique ways of dealing with fire.”

However, because of changing conditions, chaparral is being subjected to more frequent wildfires than anytime in history. So applying prescribed burns delivers a one-two punch to its sustainability, he said.

“The problem is you’re introducing fire into a system that’s already experiencing too much fire,” Baker explained.

Because the chaparral is burning more frequently, it isn’t maturing enough between fires to produce the number of seeds necessary to properly regenerate after it’s burned, he said.

“When the fire comes through, it takes out all the vegetation above the ground,” Baker continued. “That’s exactly normal for chaparral. But there are seeds down below that have been building up over decades, and some [native plants like ceanothus] only come up after a fire because the seeds have been exposed to extremely high heat.”

And because prescribed fires burn less intensely than wildfires, they’re not hot enough to induce germination in the seeds of a lot of chaparral species.

Baker said when the native shrubs disappear, they are being replaced by non-native grasses like wild oats, bromes and cheatgrass.

“The spread of invasive grasses is increasing the frequency of fires,” he said. “They pose a greater fire risk because they dry out earlier in the year … and have a very low ignition point.

“If you look at all the fires, most of them have started in grass,” he added. “The flames move quickly [through grass] and spread into chaparral.”

Baker said another issue is that prescribed burns are usually cover only a small area — too small to be effective.

“What you see is when wildfire moves across country, it either moves right through that [small prescribed burn area] or goes around it,” he said. “The Thomas fire went through areas of prescribed fire before it hit Ventura."

Firefighters recognize their best at appreciation night in Santa Maria

Five local firefighters were recognized for their service, commitment and heroism Wednesday during the 43rd annual Firefighters Appreciation N… 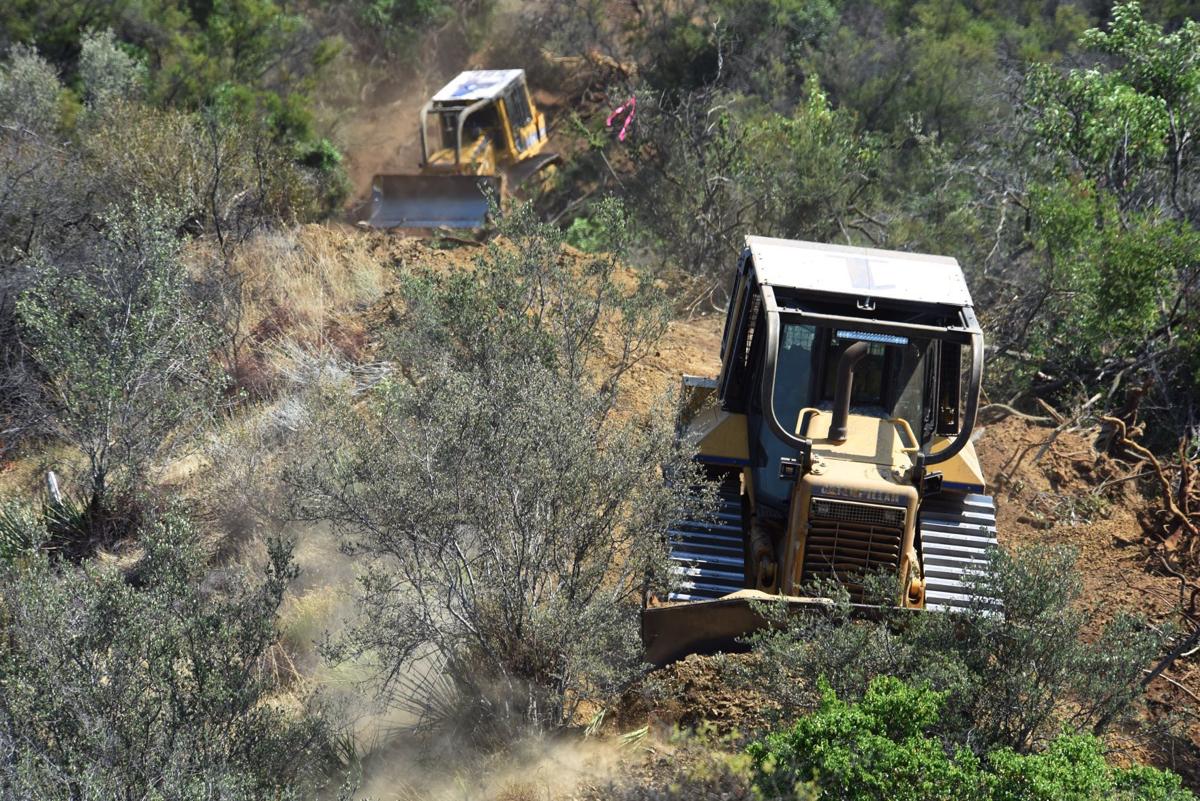 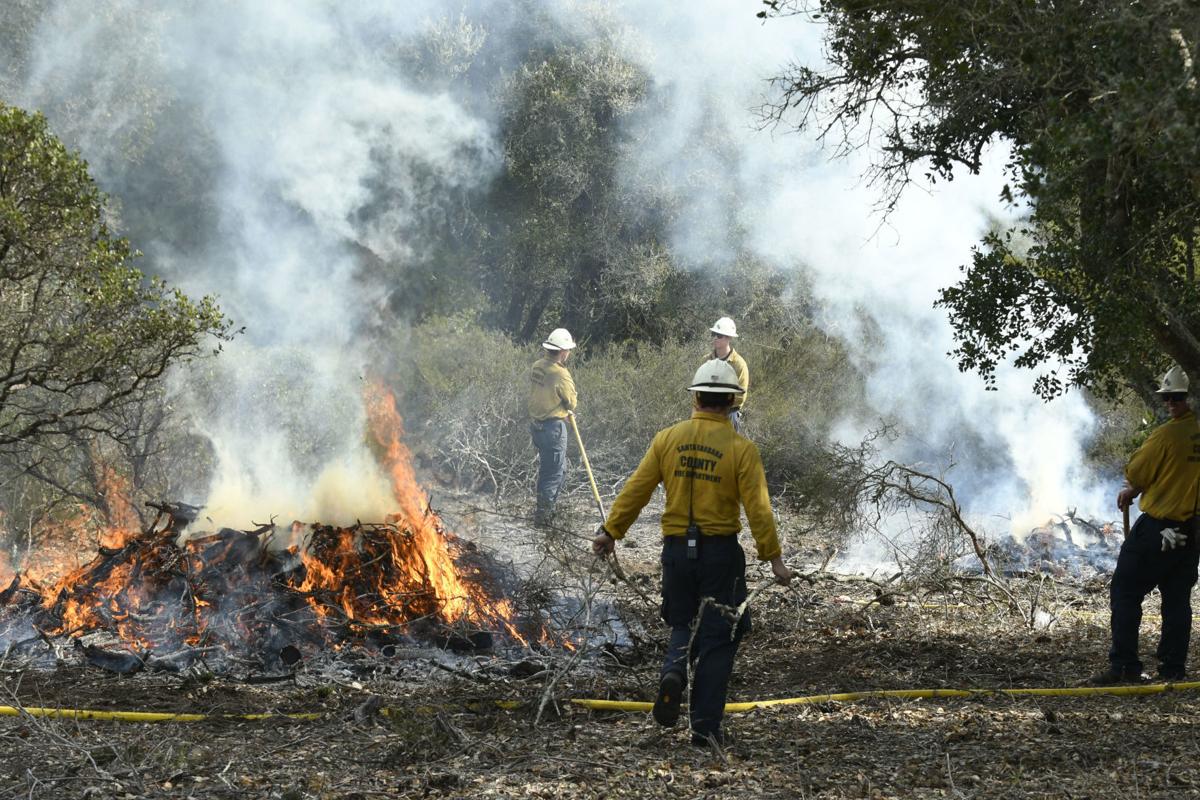 In late February, firefighters from the Santa Barbara County Fire Department burn piles of tree branches and brush that were cleared to create defensible space from wildfires on the Burton Mesa. 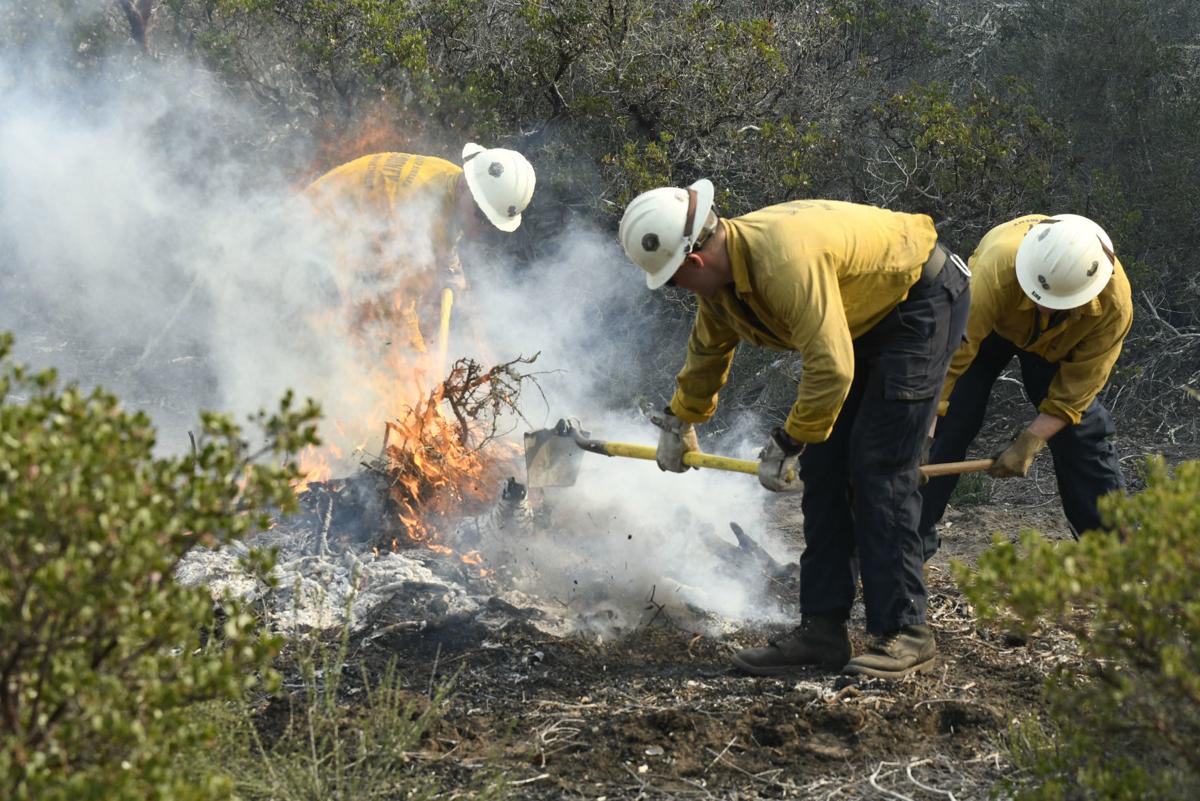 Firefighters from the Santa Barbara County Fire Department burn piles of tree branches and brush that were cleared to create defensible space from wildfires on the Burton Mesa in late February. The area west of Rucker Road and east of the East Mesa Oaks subdivision was the first of three plots extending to Vandenberg Village that were burned.