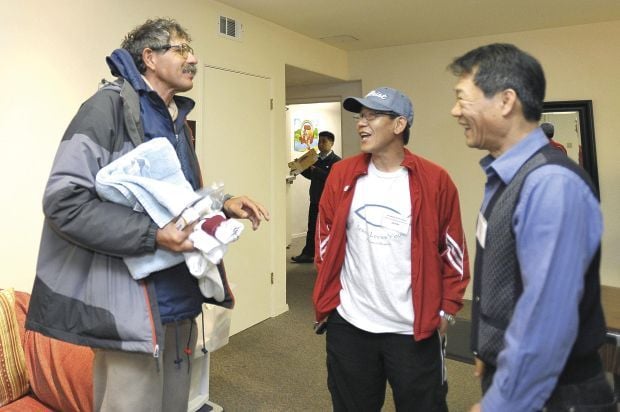 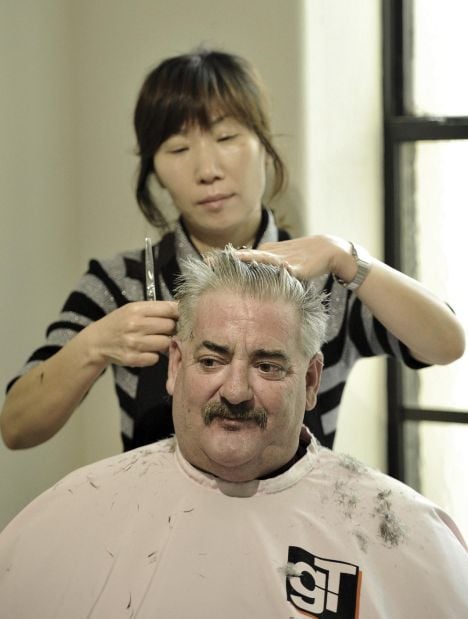 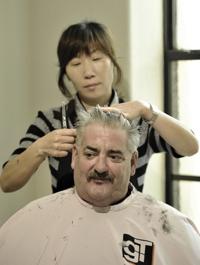 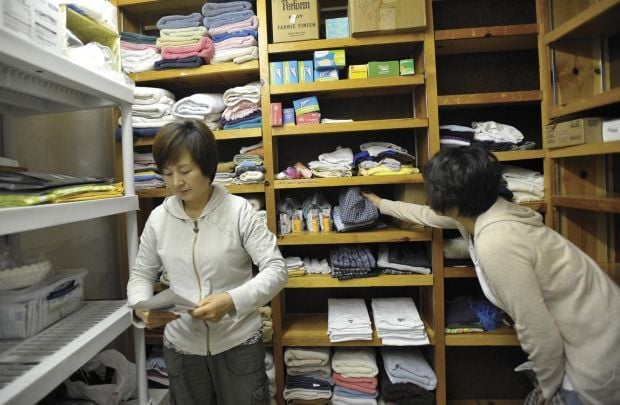 Volunteer’s Hyun O. Cho, left, and Sanghee Kim stock the storeroom at the First United Methodist Church in Santa Maria where the homeless can

Volunteer’s Hyun O. Cho, left, and Sanghee Kim stock the storeroom at the First United Methodist Church in Santa Maria where the homeless can

Mark Burgess has been out of work since being let go from Wal-Mart in Santa Maria two years ago. He’s been looking and looking ever since.

That’s why Monday he showed up at Showers of Blessing, a morning of free showers, haircuts, continental breakfasts and a variety of services aimed at the community’s needy run by a coalition of Santa Maria churches.

For Burgess, 52, it’s a necessary service. Pounding the pavement in his search for employment, he said he recognizes the value of first impressions.

“Appearance is important for me,” Burgess said as one of the program’s volunteers shaped up his full head of salt-and-pepper hair.

It didn’t take long, and he left a happy customer.

And he has company.

More than 400 clients have come through the doors for showers since the program started in August, officials said. Another 201 have gotten haircuts; 126 showed up for the food; and another 145 availed themselves of other basic necessities offered by the program such as toiletries, clothing or sleeping bags.

Dorothy Mogavero, a spokesperson, said the number of people who show up for the program — from 8 a.m. to noon every Monday at First United Methodist Church — is growing.

“There is not another place to take a shower” in Santa Maria if you don’t have housing, she said. “The volume we have, it’s nonstop.”

If they can round up enough volunteers, organizers hope to add another day each week to the program, probably Thursday.

Although a variety of churches have helped since the program’s doors opened, it is now staffed with volunteers from First United Methodist, Bethel Korean United Methodist Church and Crestwood Christian Fellowship.

Many of the needy who show up for Showers of Blessing are unable to get into the city’s Good Samaritan shelter for the homeless. Mogavero said some have been living in cars, some had their water shut off. Others live with several families in one home and are unable to shower, she said.

“It’s not just the people you see on the corner, asking for money,” said Kitty Connolly, a volunteer. “Not at all.”

About 60 percent of the clients come more than once, Mogavero said.

Timothy Foster is one. He’s been coming on a regular basis almost since the program started.

“It’s unique,” he said Monday, finishing his shower and then settling down on a couch to chat with volunteers about all sorts of things, including the intricacies of the English language and Ernest Hemingway and Nathaniel Hawthorne, two favorite authors.

One of his favorite aspects of the program: “The lovely company.”

Mogavero said one of the best parts of the program’s showers, haircuts and extras is how they restore self-esteem and a sense of being part of the community.

“They’re here because they’re applying for jobs, or they’re going to visit family, or they’re just going to be out in public,” she said.

Being well groomed helps them do all of the above with confidence.

“They want their dignity,” she said.

• Volunteers are needed for “Showers of Blessing,” a program offering free showers, haircuts and other services to the community’s needy.

• Organizers are hoping that with more volunteers, they will be able to operate a second day of the week.

• The organization is also hosting an open house from 3 to 5 p.m. Wednesday, May 1, at First United Methodist Church, 311 S. Broadway, Santa Maria.