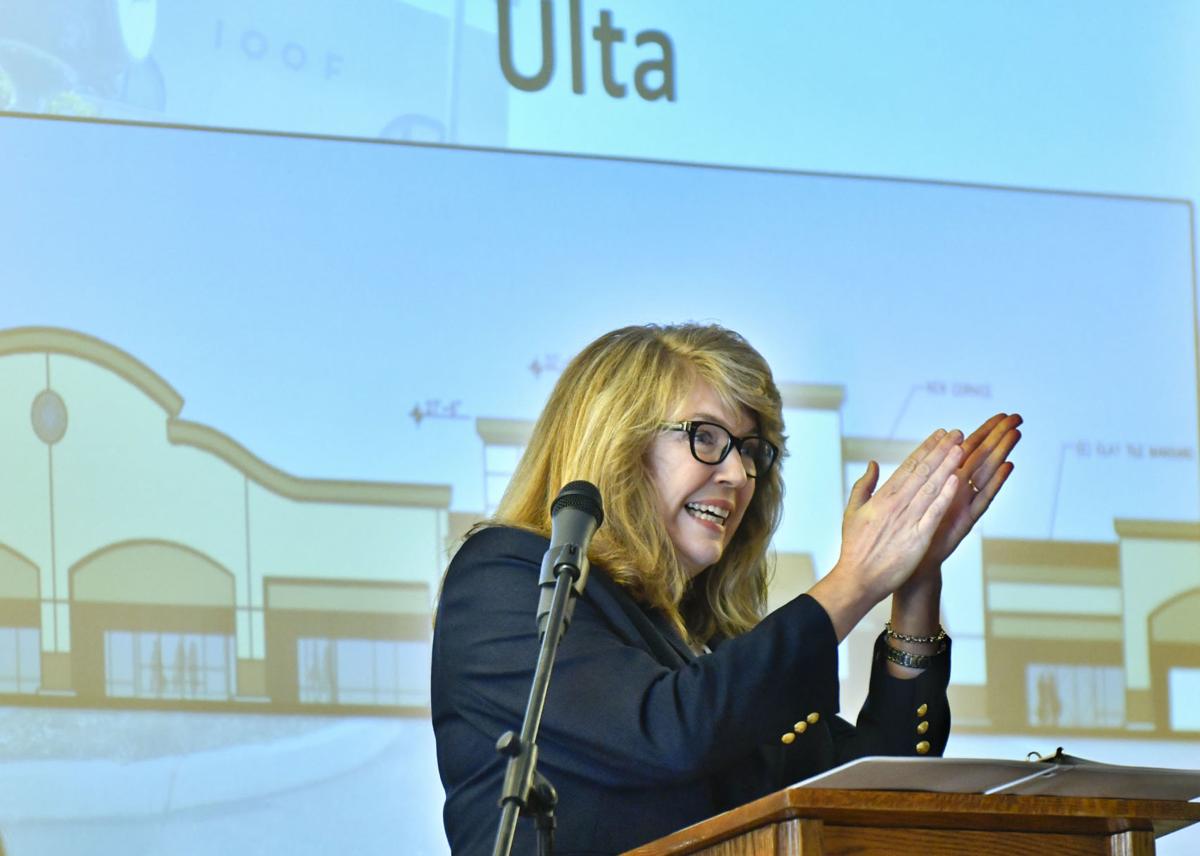 Interim City Manager Teresa Gallavan applauds with the audience after announcing that Ulta Beauty would move into the space vacated by Staples, during the State of the City address in Lompoc on Thursday. 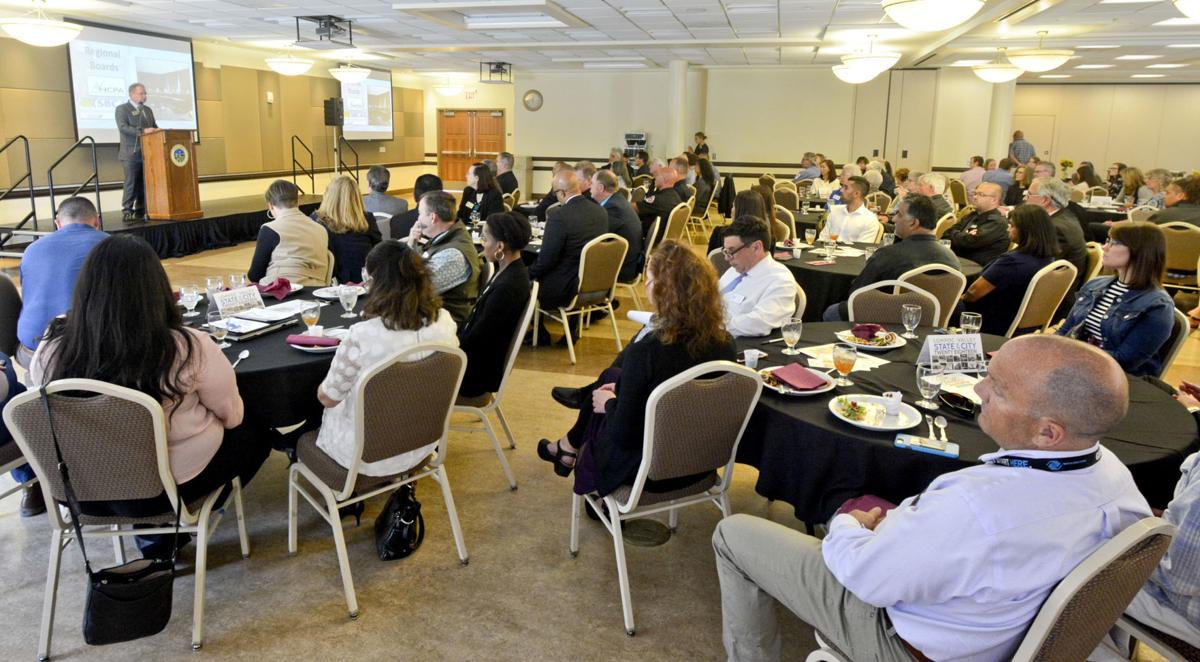 The audience listens as Lompoc Mayor Bob Lingl speaks during the State of the City address at the DeWees Community Center on Thursday. 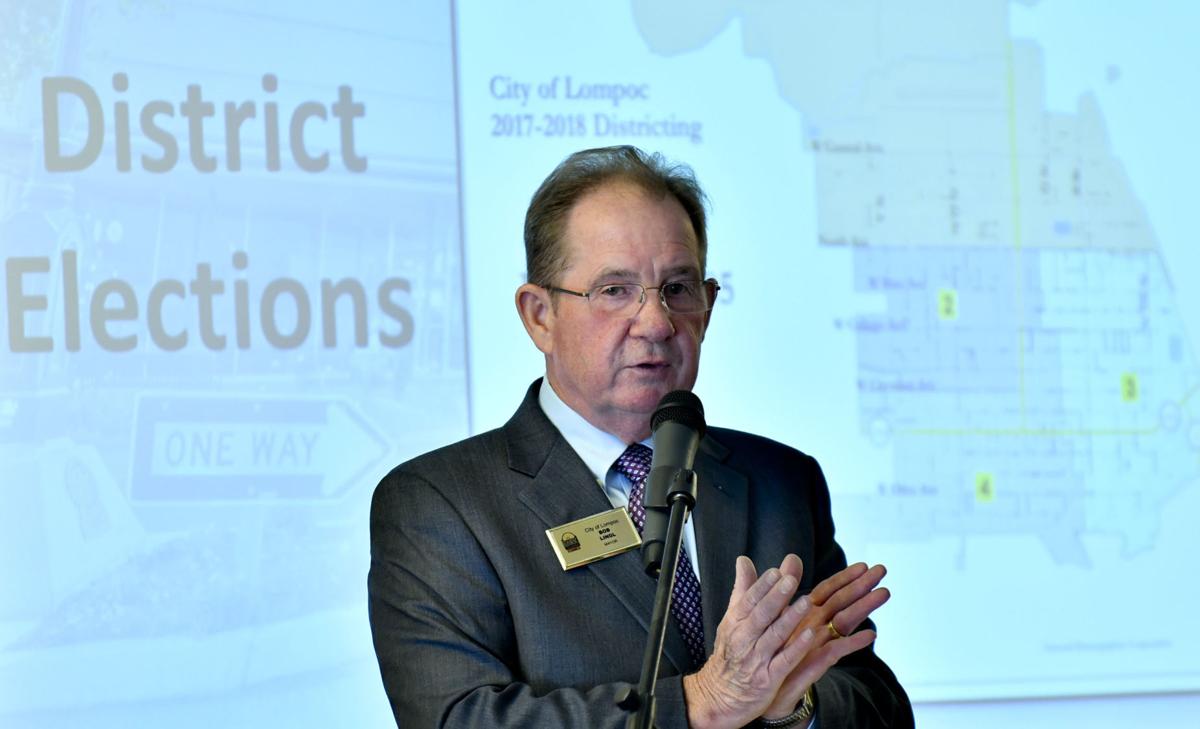 Mayor Bob Lingl speaks about upcoming district elections during the State of the City address in Lompoc on Thursday. 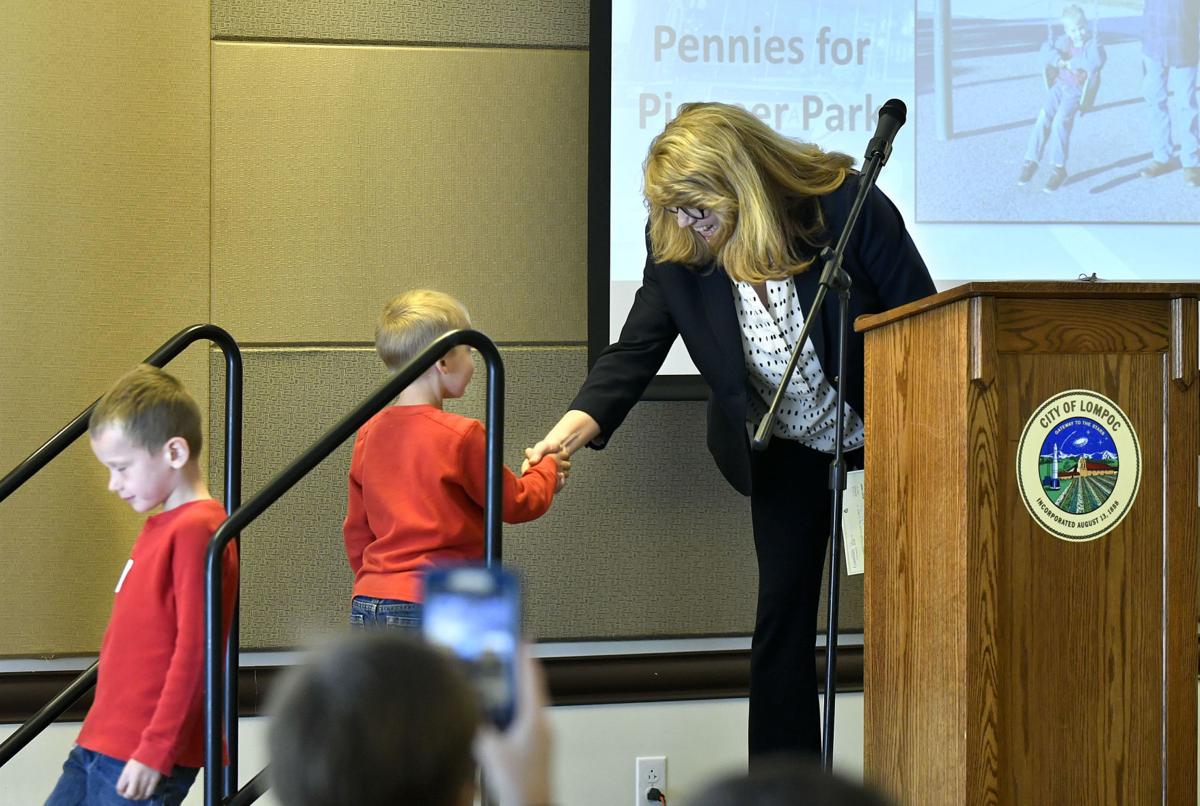 Interim City Manager Teresa Gallavan thanks Beau Brockett, 5, and his brother Boss, 6, left, for their efforts to improve Pioneer Park, during the State of the City address in Lompoc on Thursday. 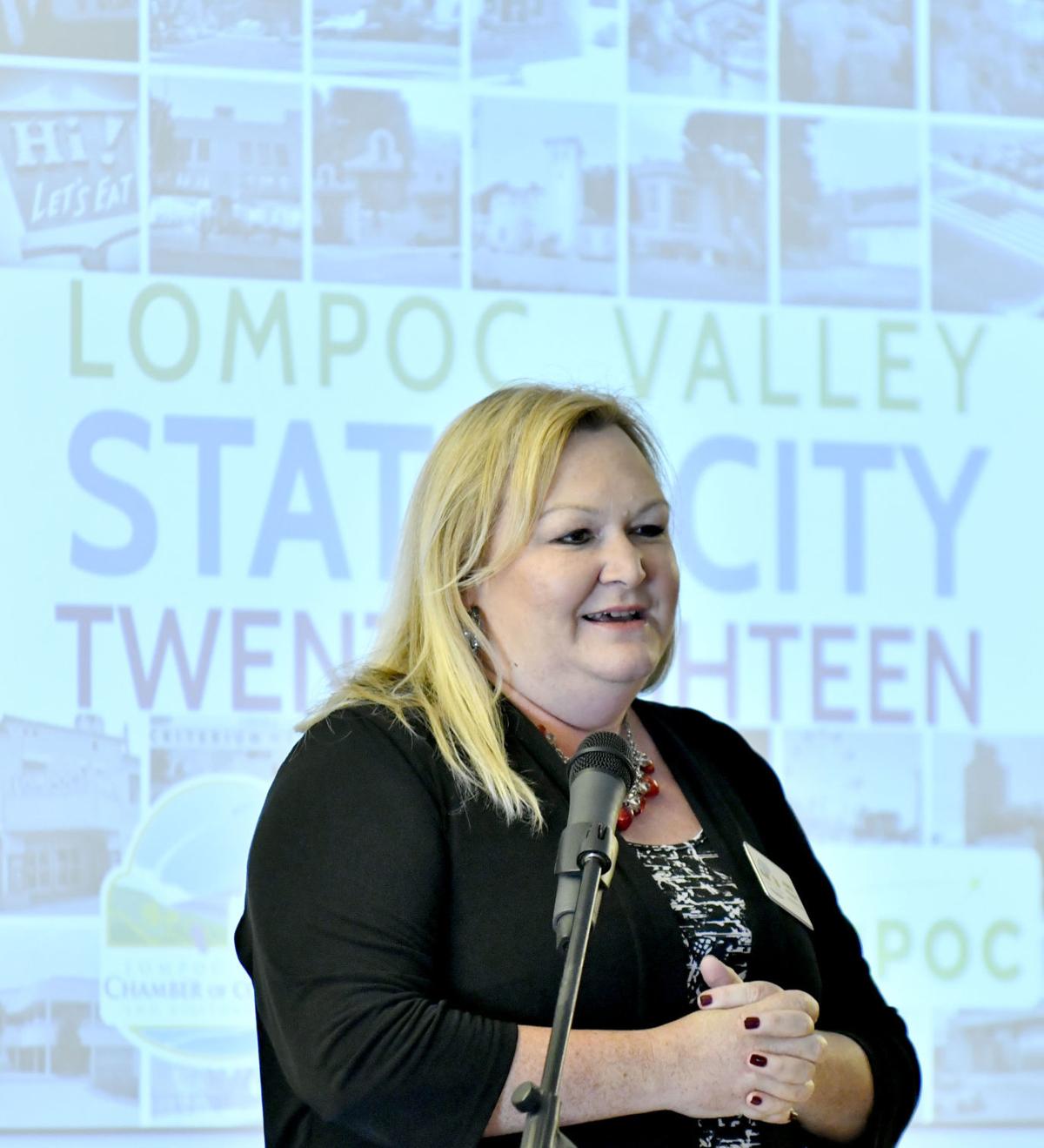 Amber Wilson, CEO and president of the Lompoc Chamber of Commerce, speaks during the State of the City address in Lompoc on Thursday.

New major retailers that are set to enter the Lompoc market, the continued implementation of the cannabis industry in the city, and positive tax growth were among the notable topics covered Thursday during Lompoc's annual State of the City luncheon.

The event, put on by the Lompoc Valley Chamber of Commerce and Visitors Bureau, was held at the Dick DeWees Community and Senior Center and was attended by a few hundred community members. Interim City Manager Teresa Gallavan and Mayor Bob Lingl led the roughly 45-minute State of the City presentation, which included reflections on accomplishments from the past year and looks ahead at some of the projects and programs anticipated for the remainder of 2018.

The biggest crowd reaction of the afternoon came when Gallavan revealed that Ulta Beauty, a national chain that carries high-end cosmetics and skincare products, is in the early stages of potentially entering the Lompoc market. The store, she said, has its sights set on moving into the Lompoc Shopping Center in the retail space that had previously been occupied by Staples, which closed up shop in Lompoc on March 16.

“We look forward to seeing them at the Planning Commission and welcoming them to our business community,” Gallavan said of Ulta Beauty, drawing some applause and heightened conversation among the audience.

After some of the initial excitement from that announcement died down, Gallavan revealed that another large vacant space may soon find a new tenant — or tenants.

She said that a developer has started plans to convert the old Lompoc Record building, located at 115 North H St., into a mixed-use property with commercial uses on the bottom floor and seven residential units on the second and third floors.

“We welcome mixed-use to Lompoc and hope it brings new life to our Old Town area,” Gallavan said.

During the presentation, Gallavan also listed some of the businesses that have recently opened in the city — a group that includes, among others, Solvang Brewing Co., Hilton Garden Inn, Starbucks, The Laundry Room and 805 Chop House, which catered Thursday’s event — and noted that large chains Planet Fitness and Blaze Pizza are also slated to open up shop soon in Lompoc.

Gallavan also spent a portion of her presentation on the city’s still-developing commercial cannabis industry.

She noted that the city, so far, had received six applications for commercial cannabis use licenses, but she said that more are anticipated.

“Because this is such a new industry — and not only for us, but the state (as well) — there are going to be new challenges and opportunity that we work through as we learn how to integrate this new industry into the fabric of our community,” she said.

Aspects of the city’s financial situation were also discussed.

Mayor Lingl noted in his remarks that the city submitted a balanced 2017-19 biennial budget after lengthy, and sometimes testy, deliberations last year, “but we’re rapidly finding out that we’re probably gonna have to make some adjustments, which will call for probably additional cuts in expenses.”

He pointed out that some of the current Lompoc City Council members have stated that they want to be more involved in the next budget process, and he said to the audience at Thursday’s luncheon: “It’s important that you, the community, stay involved, too.”

“Your participation is important for everything that we do,” he later said. “Obviously, we don’t have all the answers, but collectively, as a community, we will. So, stay engaged (and) let us know what your feelings are, no matter what it is.”

During her portion of the presentation, Gallavan displayed charts that showed the changes in Lompoc’s tax revenue over the past several years. She expressed excitement that the city’s tax revenue had steadily gone up over the past six quarters — a span of a year and a half — and she noted that Lompoc’s growth in that area during that time had exceeded statewide growth over all six quarters, exceeded Santa Barbara County growth over five of the last six quarters and beat the tri-county growth in four of the six quarters.

“Keep shopping local, Lompoc,” she said. “It really makes a difference in our community.”

Early in Thursday’s presentation, Gallavan also introduced brothers Boss and Beau Brockett, ages 5 and 6, respectively, who raised about $1,600 this year to replace the swingset and make other improvements to Pioneer Park. Gallavan and Lingl both praised the boys for taking initiative and commended them for their efforts in getting the swings replaced at the park in February.

Boss and Beau weren’t just there for accolades, however. The boys went up to the podium to present Gallavan with a check for about $800, a haul they collected through their continued fundraising.

In discussing public safety, Gallavan noted that the Lompoc Fire Department is planning to introduce a new leader for its building division, which has gone through a high rate of turnover recently, and she said the Lompoc Police Department is looking at reinstating its Citizens’ Academy, which allows community members to experience what law enforcement officers go through on a day-to-day basis. The academy would be offered in both English and Spanish, she said.

Gallavan also touched on the Police Department’s plans to clear out the Santa Ynez Riverbed around the city. The riverbed is currently home to dozens of homeless encampments. Police Chief Pat Walsh initially proposed the idea of a riverbed cleanup to the Lompoc City Council at its Feb. 6 meeting.

“This effort will be done in cooperation with numerous organizations and volunteers,” Gallavan said. “A great deal of advance planning is going into this to ensure that it balances the civil rights of homeless people with local government control over its own community.”

In other city-related news, Gallavan revealed that the Lompoc Electric Division was recently awarded the Platinum RP3 Award from the American Public Power Association. RP3 stands for Reliable Public Power Provider. She said that only 240 of the nation’s more than 2,000 public power providers hold this designation.

“Our electric division is truly top tier,” she said. “The award recognizes them for providing the highest degree of reliable and safe electric service.”

Among some things planned for the near future, Gallavan said that a grant for more than $800,000 from the Federal Emergency Management Agency, or FEMA, would be used to stabilize the eroding riverbank along Riverside Drive.

“This will protect the bike and walking path that residents and visitors will be able to enjoy for years to come,” she said. “We expect construction to start on this project this summer.”

Additionally, she said the city is nearing the launch of its new website, which she said “will be an exciting development for our city, bringing us forward in terms of modernization, service and the best representation of our city.”

Gallavan also briefly touched on NASA’s upcoming InSight Mission to Mars, which will be the first interplanetary mission to launch from the West Coast of the U.S. That mission is set to kick off at 4:05 a.m. May 5 with the liftoff of a United Launch Alliance-built Atlas V rocket from Vandenberg Air Force Base.

The city teamed with Explore Lompoc, NASA and VAFB to coordinate two watch parties, among other events, for the morning of the launch. Those will be at the Lompoc Airport and at St. Mary’s Episcopal Church.

Gallavan encouraged anyone interested in volunteering to work at the launch parties to contact the Lompoc Chamber at 736-4567.

“We are proud to have aerospace leaders and innovators here in our valley, and we hope you wake up early ... and join us,” she said.

The entire event is set to be aired and re-aired over the coming weeks on Tap TV, the city’s public access station. To find out when it will air, visit www.cityoflompoc.com/taptv/.

Gallavan wrapped up the luncheon by thanking everyone who attended and encouraging them all to stay involved.

“You, our community partners, are such an important part of how we serve the Lompoc Valley, and collectively, how we shape its future,” she said. “We have seen how working together we can accomplish more for the betterment of our community. We are committed to continuing our forward progress — working together, as Lompoc does.”

While this week’s historic Mission to Mars launch has already captivated the imagination of space and science enthusiasts around the globe, se…

With tensions seemingly boiling over in response to the rising rate of property crimes — particularly thefts — throughout Lompoc, several resi…

Raising tariffs on imports will damage not only the U.S. economy but also international relations, and abandoning NAFTA could have unanticipat…

Less than two months after deciding not to impose any additional taxes on local cannabis operators, the Lompoc City Council changed course Tue…

Two more national retailers are set to move into the Lompoc Shopping Center, a city spokeswoman announced Friday, less than two months after i…

As excitement continues to build for next month's historic Mission to Mars from Vandenberg Air Force Base, several events are planned in and a…

The city of Lompoc plans to begin utilizing its new downtown Transit Transfer Center on Monday.

The efforts of two young Lompoc brothers paid off Wednesday as they were on hand to celebrate the arrival of two new swings at Pioneer Park.

When Lompoc brothers Boss and Beau Brockett visit their grandmother’s home, one of their favorite things to do is run across the street to pla…

Lompoc is set to lose another big-box retailer this month with the impending closure of the Staples store on North H Street.

Three national retailers prepping to open up shop in Lompoc

Interim City Manager Teresa Gallavan applauds with the audience after announcing that Ulta Beauty would move into the space vacated by Staples, during the State of the City address in Lompoc on Thursday.

The audience listens as Lompoc Mayor Bob Lingl speaks during the State of the City address at the DeWees Community Center on Thursday.

Mayor Bob Lingl speaks about upcoming district elections during the State of the City address in Lompoc on Thursday.

Interim City Manager Teresa Gallavan thanks Beau Brockett, 5, and his brother Boss, 6, left, for their efforts to improve Pioneer Park, during the State of the City address in Lompoc on Thursday.

Amber Wilson, CEO and president of the Lompoc Chamber of Commerce, speaks during the State of the City address in Lompoc on Thursday.