An altercation between Righetti High School students and a school resource officer is caught in these stills from a student's cellphone video. 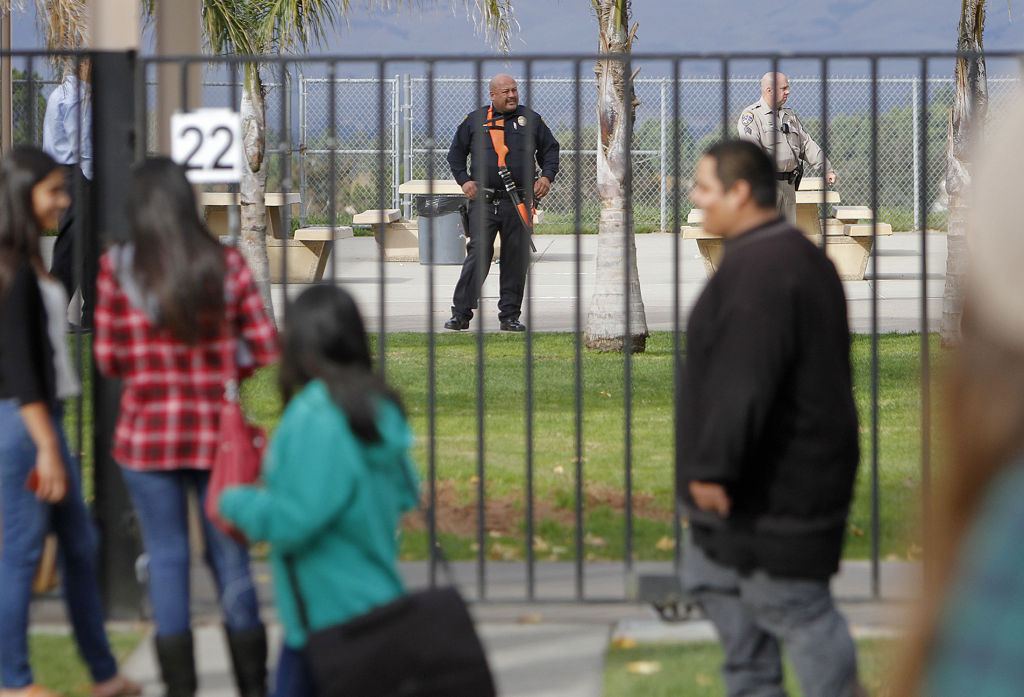 Law enforcement officers stand guard as Righetti High students leave the school after two fights broke out and the school was put on lockdown Wednesday afternoon. 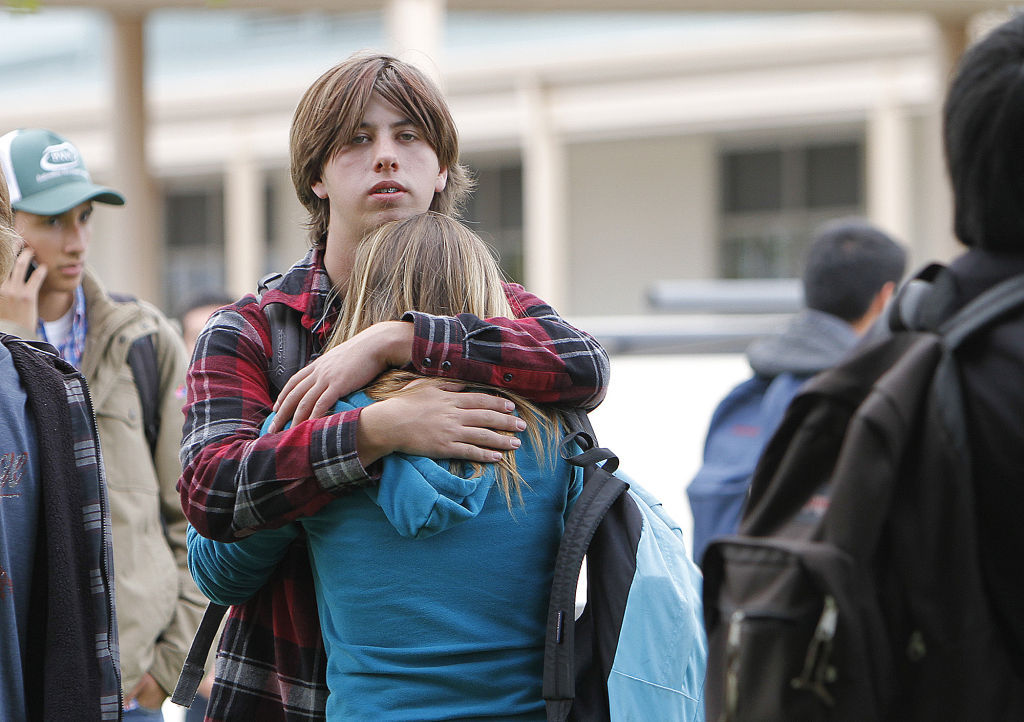 Righetti High students embrace each other as they wait for their parents to pick them up after the school was put on lockdown Wednesday afternoon.

An altercation between Righetti High School students and a school resource officer is caught in these stills from a student's cellphone video.

Law enforcement officers stand guard as Righetti High students leave the school after two fights broke out and the school was put on lockdown Wednesday afternoon.

Righetti High students embrace each other as they wait for their parents to pick them up after the school was put on lockdown Wednesday afternoon.

A lunchtime fight between two Righetti High School girls lead to a melee that resulted in six arrests and a 90-minute campuswide lockdown on Wednesday.

It also led to a social media storm that likely inflamed an already tense situation.

Just after the 12:25 p.m. lunch bell, a school resource officer provided by the Santa Barbara County Sheriff's Department was attempting to break up a fight between two sophomore girls, according to Sheriff's Department spokeswoman Kelly Hoover. An unidentified girl charged the officer and was knocked to the ground. That resulted in a second fight, a large scuffle and a barrage of food being thrown at the officer.

Students said some of their classmates turned on the officer, assaulting him after his confrontation with the female student.

Sheriff's deputies, Santa Maria Police and California Highway Patrol officers all converged on the school to break up the altercation. Students were locked down in their classrooms and neighboring St. Joseph High was placed on precautionary lockdown as well.

Administration cancelled classes, parents were contacted — many by their children through texts and social media — and students were released for the day at 1:52 p.m. It was the second lockdown at Righetti High this year.

"It was everywhere," student Mikayla Spjut said, describing the melee. "There were a lot of people involved."

Students said the fights that started the incident were minor and that the response of school security and law enforcement inflamed the situation. One claimed he saw officers carrying "beanbag guns," although no weapons were used.

At one point following the incident, more than a dozen patrol cars were parked in front of the school on Foster Road and the Sheriff's Department helicopter circled overhead.

"The cops made it a lot more than it had to be, pretty much," said 17-year-old Chloe Williamson, describing how a sheriff's deputy knocked a girl to the ground and dragged her away. "She was resisting, but he did not have to go punch her in the face. They could have tried other things before."

The Sheriff's Department said deputies and officers responded appropriately in a fluid situation. Hoover said one deputy was punched in the chest but that no one was taken to the hospital because of the incident.

"You definitely have to understand that the law enforcement that are here are definitely outnumbered and I'm not sure what happened in that instance, but I feel confident that they were reacting to what was happening to them," she said.

Hoover said the large crowd that gathered began yelling obscenities at the deputy and threw food, food containers and bottles at him. The deputy was struck several times by items thrown at him by the crowd. School security officers and school administrators attempted to hold the crowd back as they tried to converge on and kick the deputy, she said.

Social media heightened the reaction of the students following the incident. Many students who weren't in the vicinity of the incident saw it later on cellphone video that was circulated on social media. And even before they were released from the lockdown, the videos flooded social media sites and were traded by many of the school's approximately 2,100 students.

Juan and Yolanda Martinez heard about the incident over social media and rushed to the school to check on their son, John. Like many parents, they waited outside the school for information from either the administration or their son.

"Usually when things like this happen they do a phone thing and they’ll call. It’s a recording from the principal telling you about the lockdown," Yolanda said.

She said she was a little leery of the reports, because the school was locked down earlier this semester over a food fight. But when they heard more reports about the incident, they decided to come to the school.

"Lately, I’ve been hearing things like this a lot. Our daughters graduated from here, and we had never heard of anything like this. Now, we hear cops are coming here all of the time, so I don’t know what's going on with the school. Outside of that it seems like a good school. I just don’t know what’s going on now," Juan Martinez said. "There are fights all the time, but when you hear guns are drawn and a girl is knocked down, you need to find out what’s happening."

Williamson expressed what many of the students seemed to feel as they walked out of their school Wednesday afternoon when she said that things got way out of hand.

"When a fight happens, everybody gets rowdy and that’s what leads to this," she said. "We already had too many cops on campus before the fights started."

Hoover said the Sheriff’s Department is continuing its investigation and that additional arrests are expected. If anyone has information that may be helpful, they are asked to call the Santa Barbara County Sheriff’s Department at 934-6150, or to leave an anonymous tip, call 681-4171.

School is back in session today at Righetti with increased security, according to the district office.

As part of our coverage of a series of fights that broke out at Righetti High School today, …

POLL: Was the deputy at Righetti High School justified in his actions?

Righetti High School students will be released at 12:25 p.m. today for Thanksgiving break, as a result of numerous calls to the campus concern…

Rumors of violence Friday at Righetti High School spurred school officials to release students early for the start of their Thanksgiving break.

Slideshow: The most-read stories in November

Click through this slideshow to see the most-read stories in November on santamariatimes.com.

Back to class, reality at Righetti

Things were back to normal Monday at Righetti High School, the first day of classes since students were released early Nov. 21 amid rumors of …