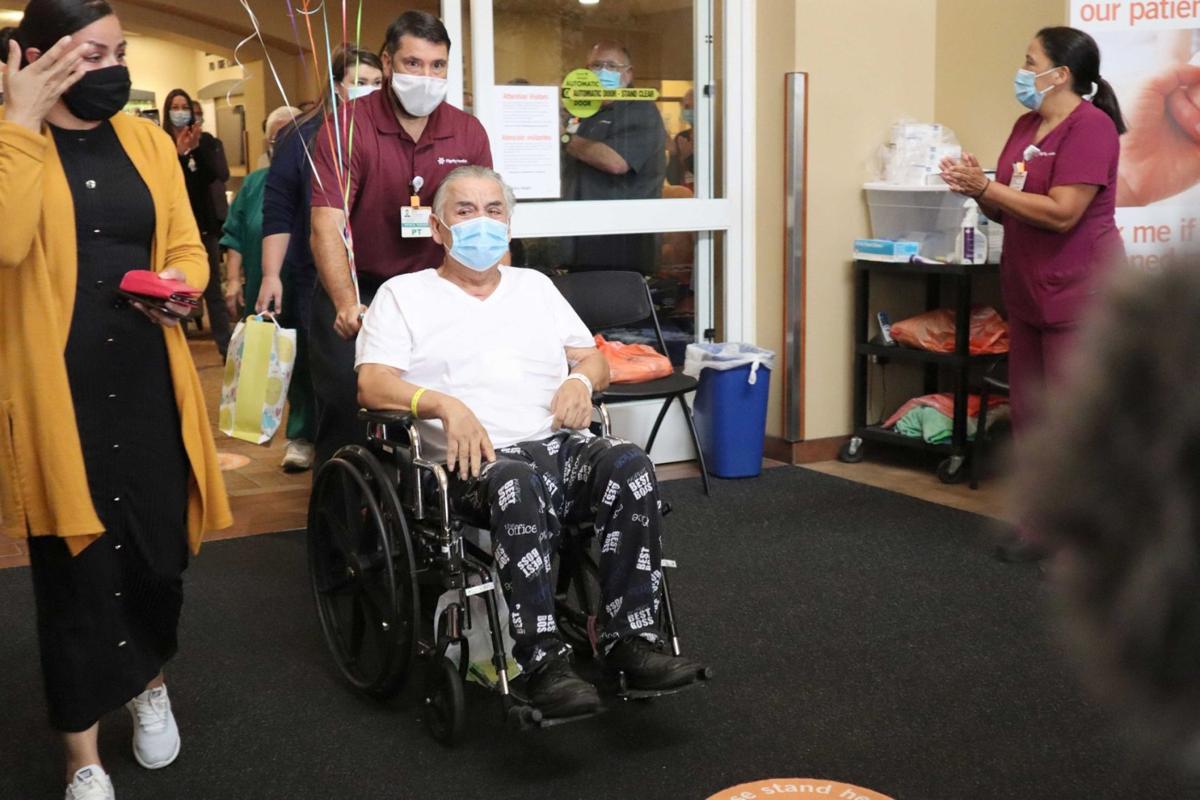 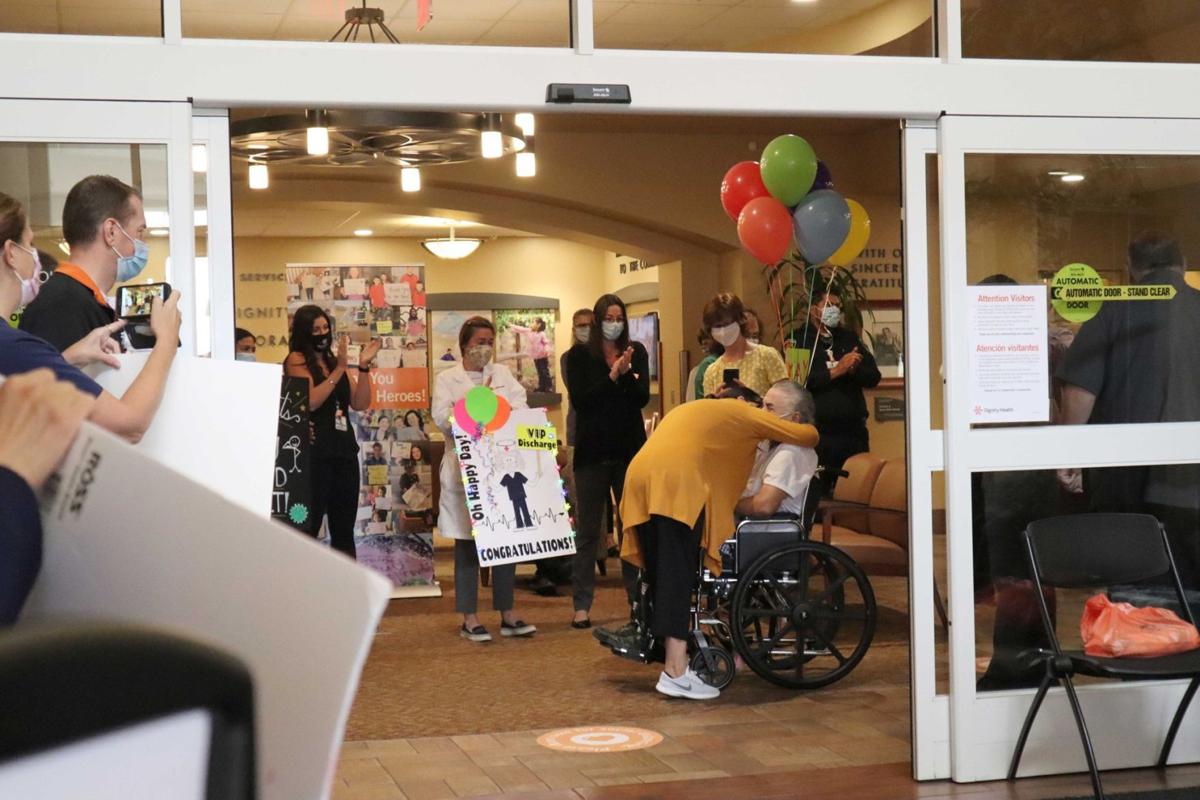 After 94 days of hospitalization for COVID-19, Santa Maria resident Efrain Rangel is embraced by his wife, Veronica, as hospital staff celebrate his discharge from Marian Regional Medical Center on Wednesday. 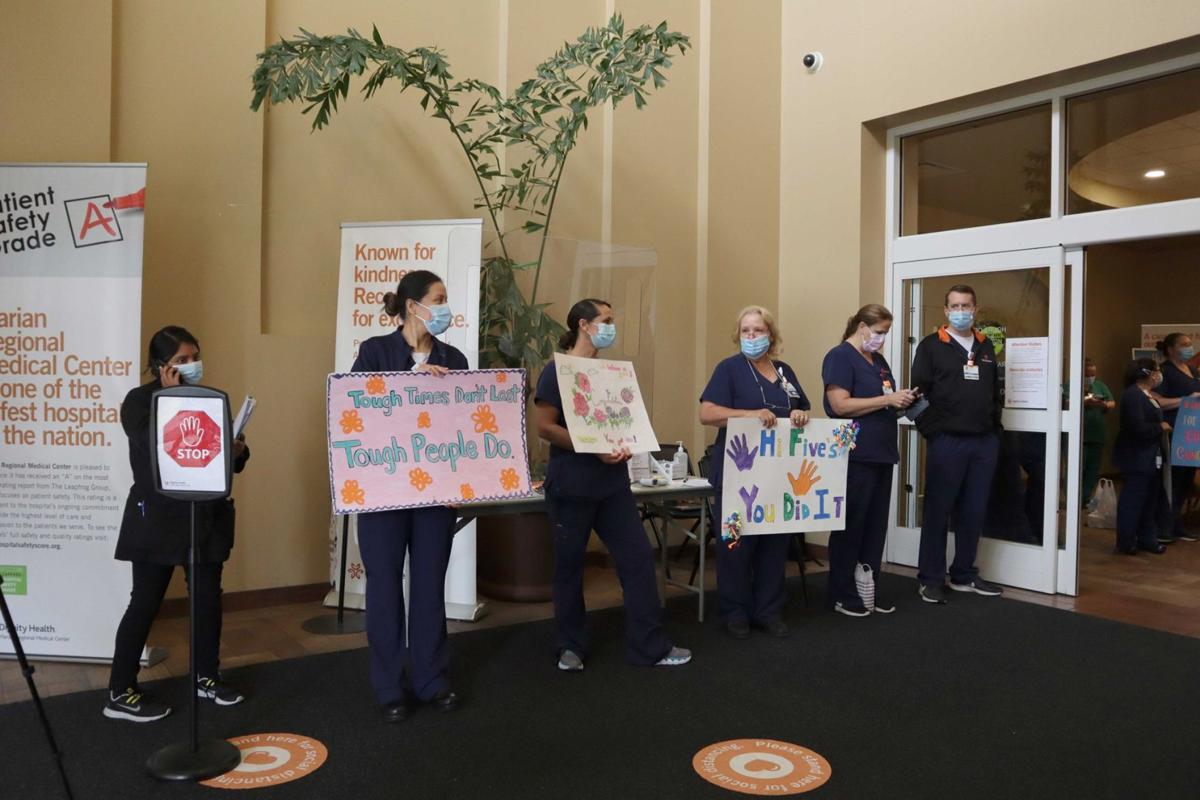 Staff at Marian Regional Medical Center celebrate the discharge of COVID-19 survivor and Santa Maria resident Efrain Rangel, who was hospitalized for 94 days with severe virus complications, on Wednesday.

To celebrate his discharge and miraculous recovery, medical center staff held a parade for Rangel, 62, as he left the hospital in a wheelchair with his wife, Veronica, and other family members.

Efrain's sister, Yocabeth Rangel, said seeing her brother released Wednesday was astonishing, especially after doctors warned her family in April that Efrain would likely not survive after being in a coma for a month and suffering two strokes.

At one point, doctors even asked family members over FaceTime if they wanted to stop treatment since he was doing so badly, she said. Veronica refused, however, stating that “God has the last word.”

“A week later, he opened his eyes,” Yocabeth said. “He’s a big miracle.”

After Efrain, who siblings said has no underlying health conditions, entered the hospital on March 26, Veronica was left to take care of their three children, Ephrain, Gabriel and Samuel.

Through the experience, she learned the virus does not discriminate and how deeply it can challenge a person's faith.

"When you're living it, you understand that it's a really difficult illness," she said.

With her husband unable to work while in the hospital, Veronica said she relied mainly on assistance from her church, as well as from the Rangel family and other community members, to get by.

In April, Efrain's family created a fundraising page on Facebook with updates about his condition, where community members raised nearly $4,000 to assist the family.

"I'm so grateful for all family members and people who have helped us," Veronica said.

Along with facing financial challenges, Veronica said it was often difficult to get information about her husband's condition with her limited English and the hospital's lack of Spanish-speaking ICU staff.

"For me, it's been hard because I don't speak English ... and the language from ICU doctors can be difficult to translate," she said.

For that reason, she was grateful for English-Spanish translation by family members and one Spanish-speaking ICU employee who helped translate the complex updates from doctors, she said.

At this point, she said she is incredibly glad to have her husband home after more than three months of hardship.

"I'm so happy to have him home ... It all has to do with God. God allowed him to return," Veronica said.

Marian Chief Medical Officer Chuck Merrill said the hospital has had a number of long-term COVID-19 patients and it is always rewarding to see them return home.

"We have had a few patients that have needed hospitalization for more than a month, and we are always incredibly happy to see them return to their families and loved ones, as we are with all of our patients," Merrill said.

Moving forward, Efrain still has a good deal of healing to do at home and will require continued therapy and a feeding tube for the time being, Yocabeth said.

However, she has faith in her brother, describing him as a friendly, hardworking and strong man. He is also a devout Christian, she added, and he likely contracted the virus at church, which she said he attended several times a week.

"This was all so new, and so new to my brother," she said. "This is a big example that the virus is still out there."

After 94 days of hospitalization for COVID-19, Santa Maria resident Efrain Rangel is embraced by his wife, Veronica, as hospital staff celebrate his discharge from Marian Regional Medical Center on Wednesday.

Staff at Marian Regional Medical Center celebrate the discharge of COVID-19 survivor and Santa Maria resident Efrain Rangel, who was hospitalized for 94 days with severe virus complications, on Wednesday.