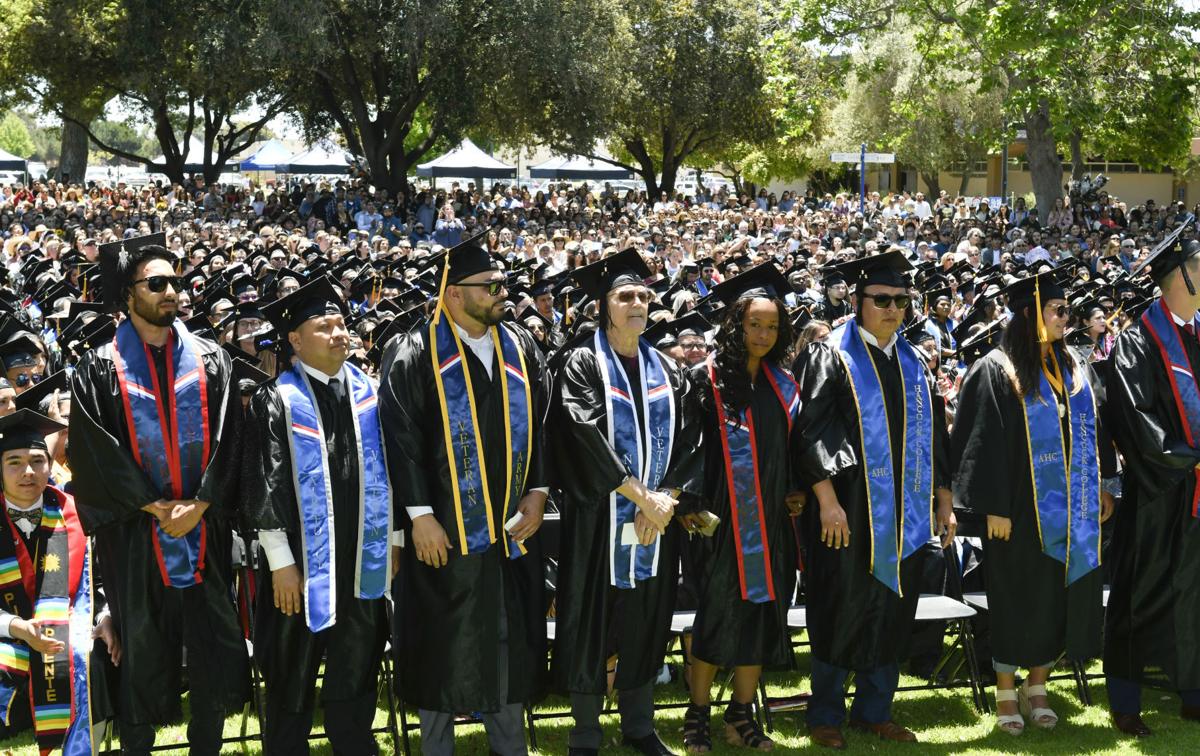 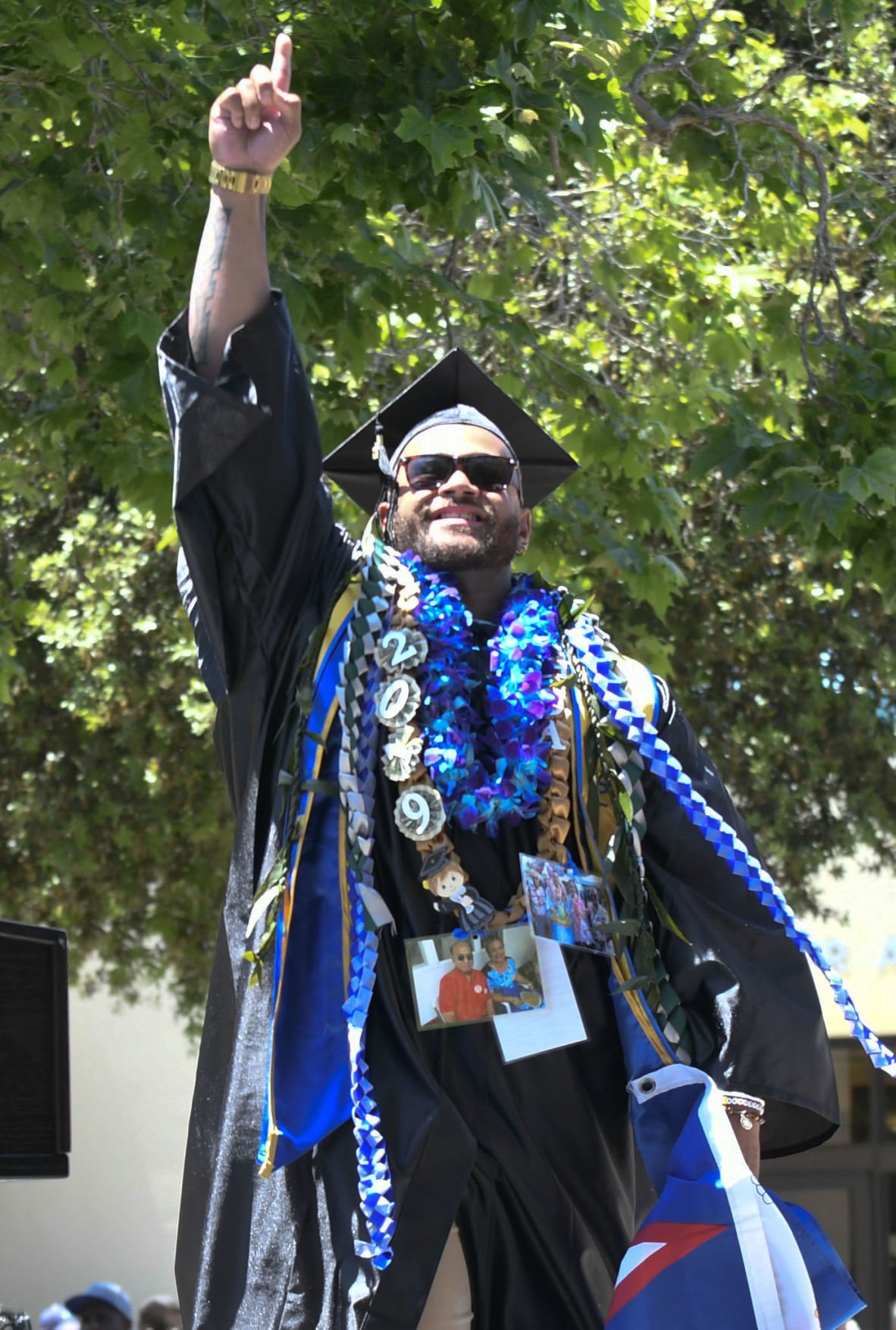 Joshua Lauvao points to the sky as he receives his diploma, carrying an American Samoa flag and pictures of his grandparents, John and Faailoilo Lauvao, during Hancock College's 98th commencement on Friday. 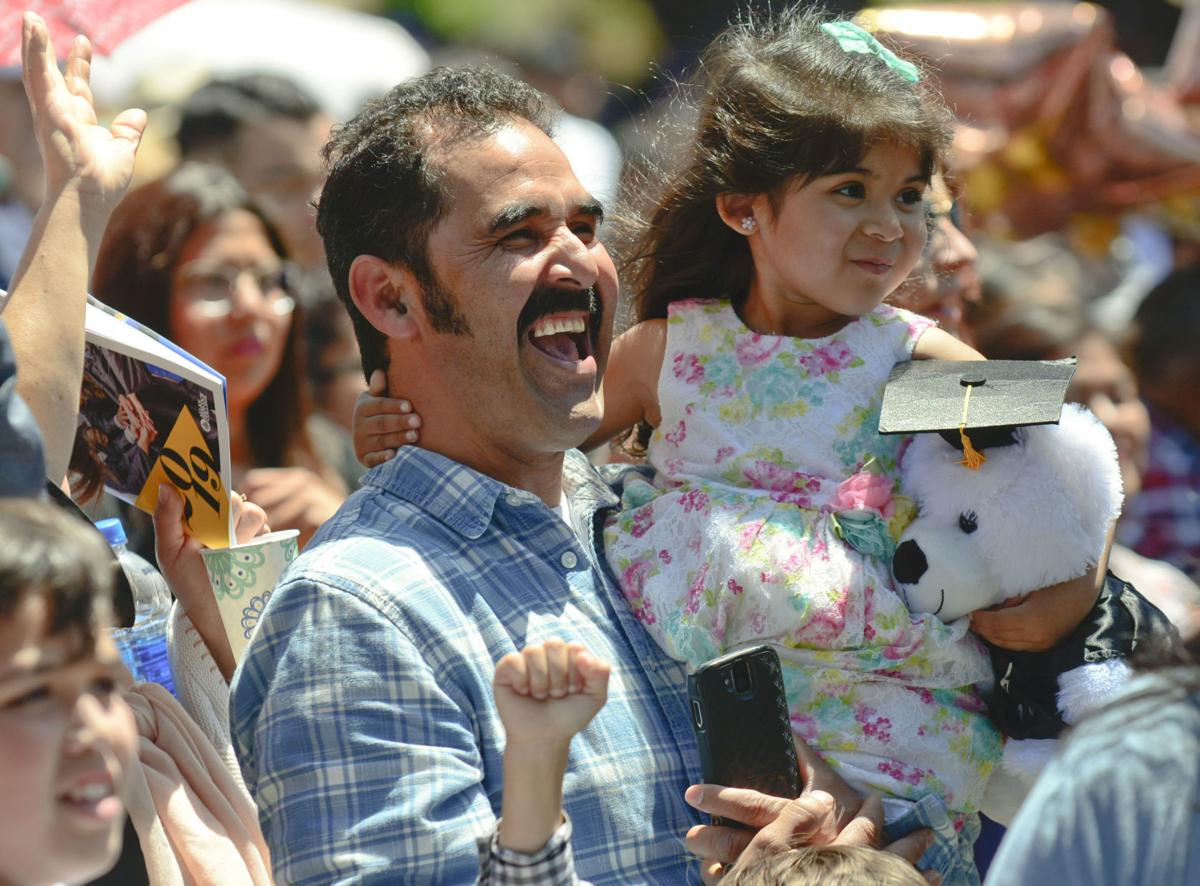 Spectators cheer for a graduate during Hancock College's 98th commencement on Friday. 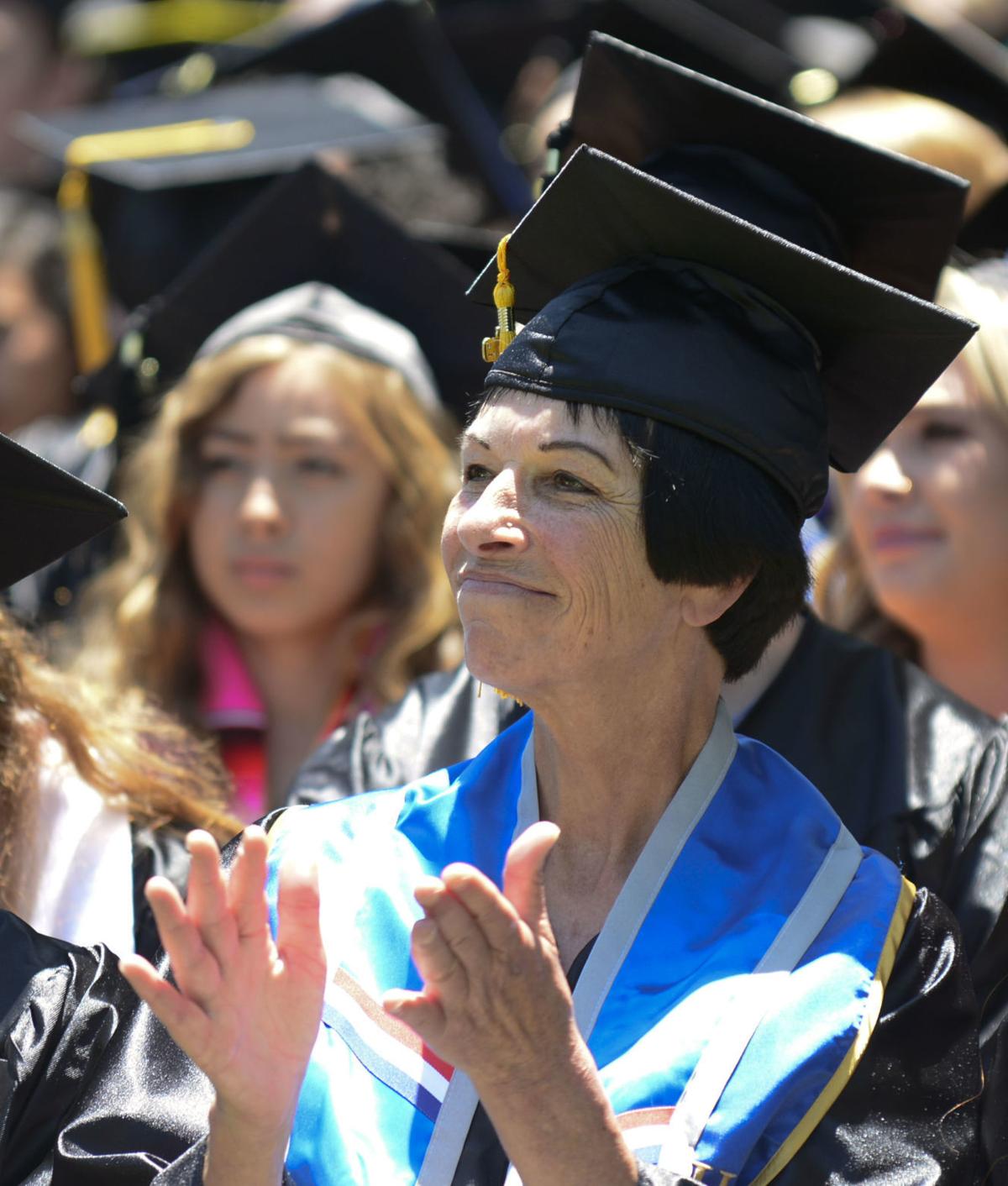 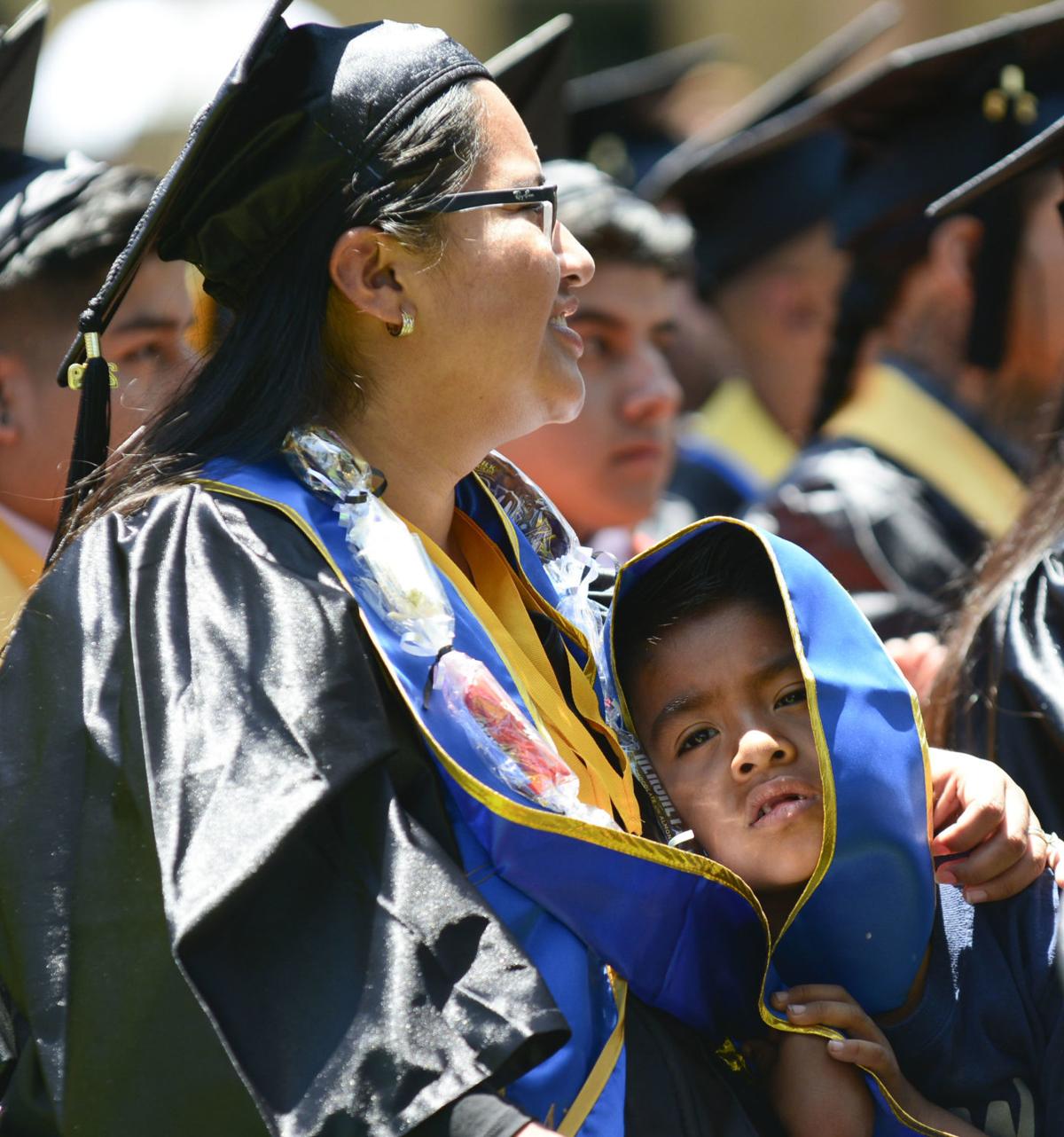 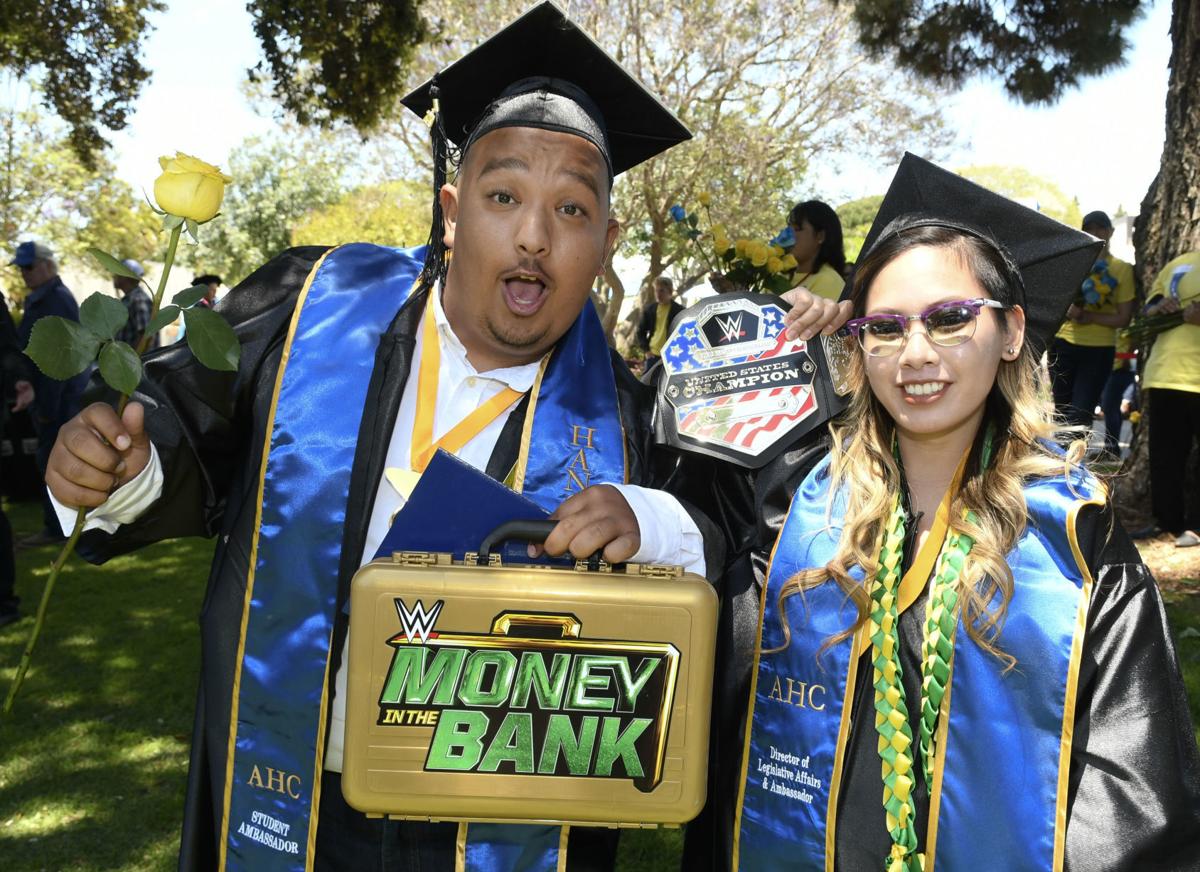 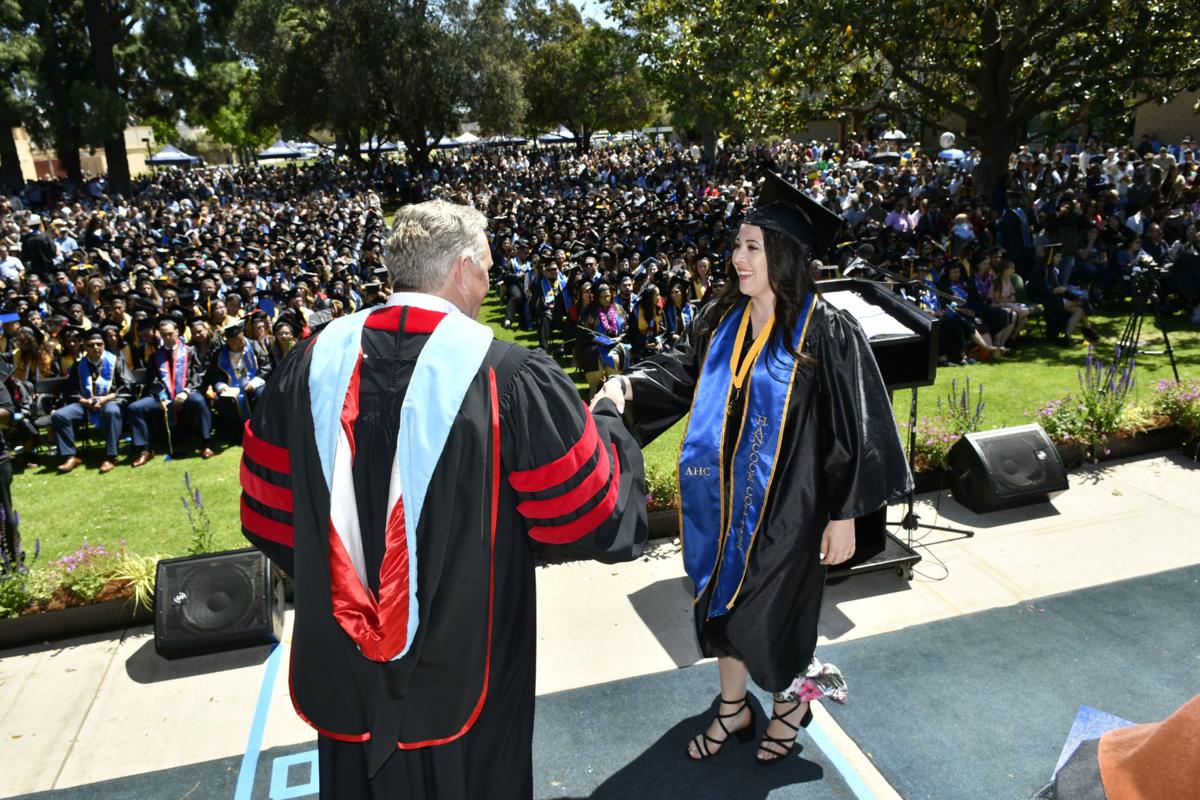 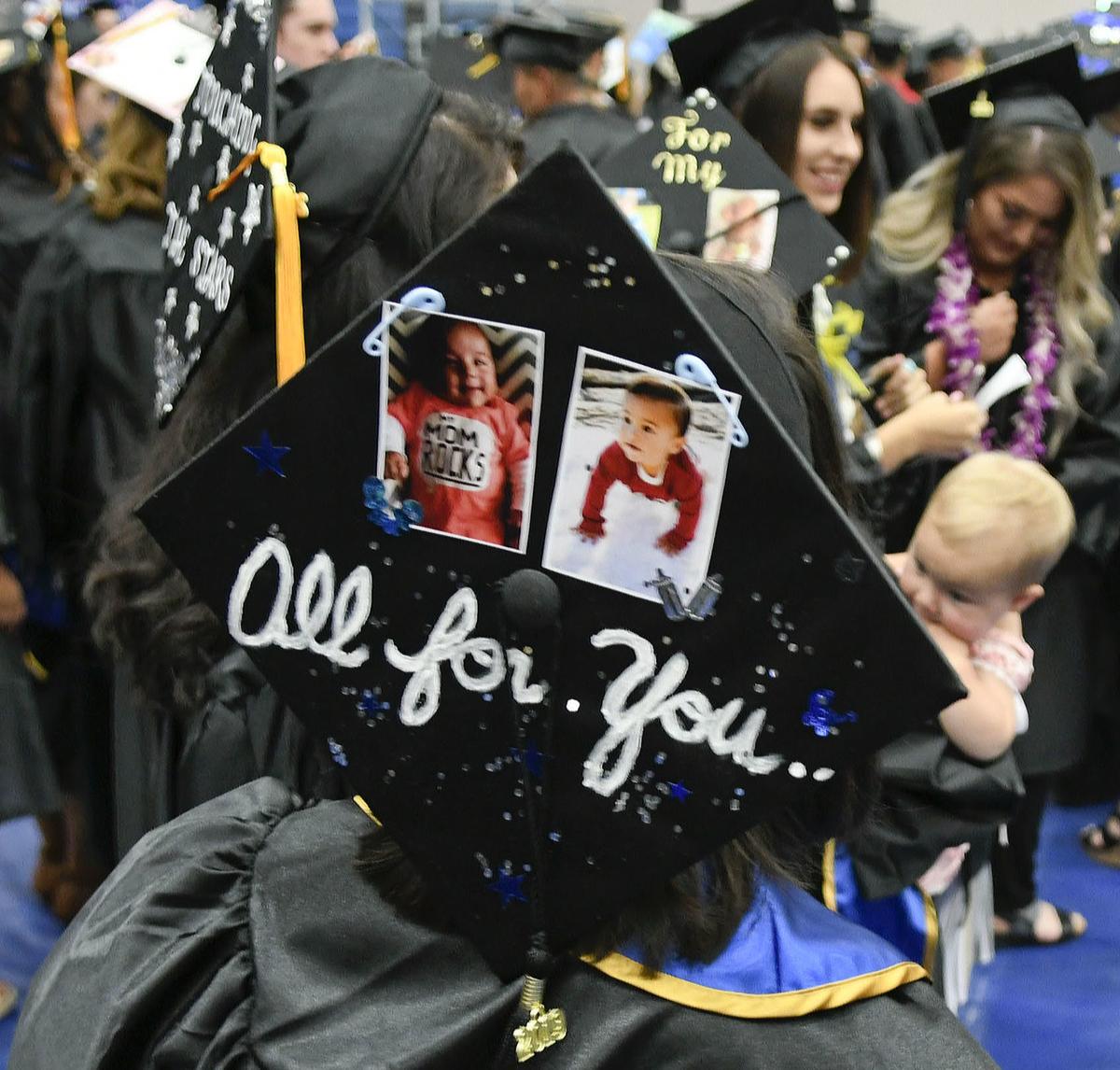 One graduate decorated her cap with pictures of her children, as another woman carried her baby during Hancock College's 98th commencement on Friday.

Hancock College celebrated yet another another record-setting graduation Friday afternoon, sending 1,273 students off into the community as members of the class of 2019.

Gathered in the common area of the college's Santa Maria campus, family and friends cheered and celebrated as the members of the college's largest-ever graduating class walked the stage and received their degree.

The latest graduating class is 26% larger than last year's, according to Superintendent/President Kevin Walthers, and 70% bigger than 2013.

"Some say that an investment in higher education doesn’t pay off, that our efforts aren’t moving the needle," he told graduates and their families. “[But] when I look at our more than 1,200 graduates, I see an investment that is paying huge dividends for our students, our community, and the state of California."

Some graduates plan to continue their education at four-year colleges or universities, while others will start new jobs or different careers with the vocational training and education they received.

Although their paths may differ, Hilda Zacarias, president of the college's board of trustees, told students their diplomas will always make them Bulldogs.

Number of certificates of achievement awarded: 912

Number of students graduating with honors: 257

"Allan Hancock College is your community college,” she told the crowd. "It is a place to imagine your future and a place to make it happen. ... Today is the day that marks the start of your new journey."

For every student who received a degree or certificate, Friday's commencement — from the time they lined up to the moment they moved their tassel from right to left — was a celebration of their accomplishments and years of hard work.

Carla Zamora's family blew on air horns and erupted in cheers and applause as she crossed the stage.

For Joshua Lauvao, who unfurled an American Samoa flag as he crossed the stage, Friday's commencement let him honor his grandparents, John and Faailoilo Lauvao, who raised him while his mother completed her degree at Idaho State University.

Though most of Friday's graduates received a degree for the first time, Lompoc resident Dorian Hodge's degree in welding technology is actually her third.

The 20-year Air Force veteran already had a bachelor's degree in psychology and master's degree in education when she tapped her GI Bill benefits to return to school.

"I'm passionate about education," Hodge said, adding that she plans to re-enroll this fall and pursue a second degree in auto body technology. "Education opens so many doors and fulfills you as a person. It's such a great way to embrace life."

They spent years behind bars. Now, they're graduating from Hancock College

Retiring after 31 years at Hancock, Allegre told students that the region and campus have grown, with graduates often returning to fill important roles at local hospitals, law enforcement agencies and schools.

"As you move out into the world, you will be changing lives. Not only your own, but also the lives of your families and those you touch in your careers and in your communities," she said. "Today, you become a member of our global community, and a mentor for others who follow.”

Hancock College graduates who are transferring to four-year universities were honored Friday evening with a socially distanced drive-through ceremony on the Santa Maria campus.

Borges will officially report to her Pirates post July 1.

The namesake for Santa Maria-Bonita School District’s newest campus said he is honored but humbled to have it named for him, despite his nearl…

With an eye on reopening classrooms in the fall, LUSD officials are encouraging parents to provide feedback through a six-question "School Reopening 20-21 Parent Survey" at lusd.org.

Orcutt Academy to transform field into drive-in theater for graduation

OAHS graduates and their families will be invited to park their vehicles on the school’s field, which will be set up as a drive-in theater with an audio soundtrack broadcast via car radio.

No ceremony, but Lakeview students use graduation gowns anyway

After they received their gowns for a graduation that won't take place, Lakeview Junior High School students Danielle Veukes and Raquel Schmid…

Joshua Lauvao points to the sky as he receives his diploma, carrying an American Samoa flag and pictures of his grandparents, John and Faailoilo Lauvao, during Hancock College's 98th commencement on Friday.

Spectators cheer for a graduate during Hancock College's 98th commencement on Friday.

One graduate decorated her cap with pictures of her children, as another woman carried her baby during Hancock College's 98th commencement on Friday.