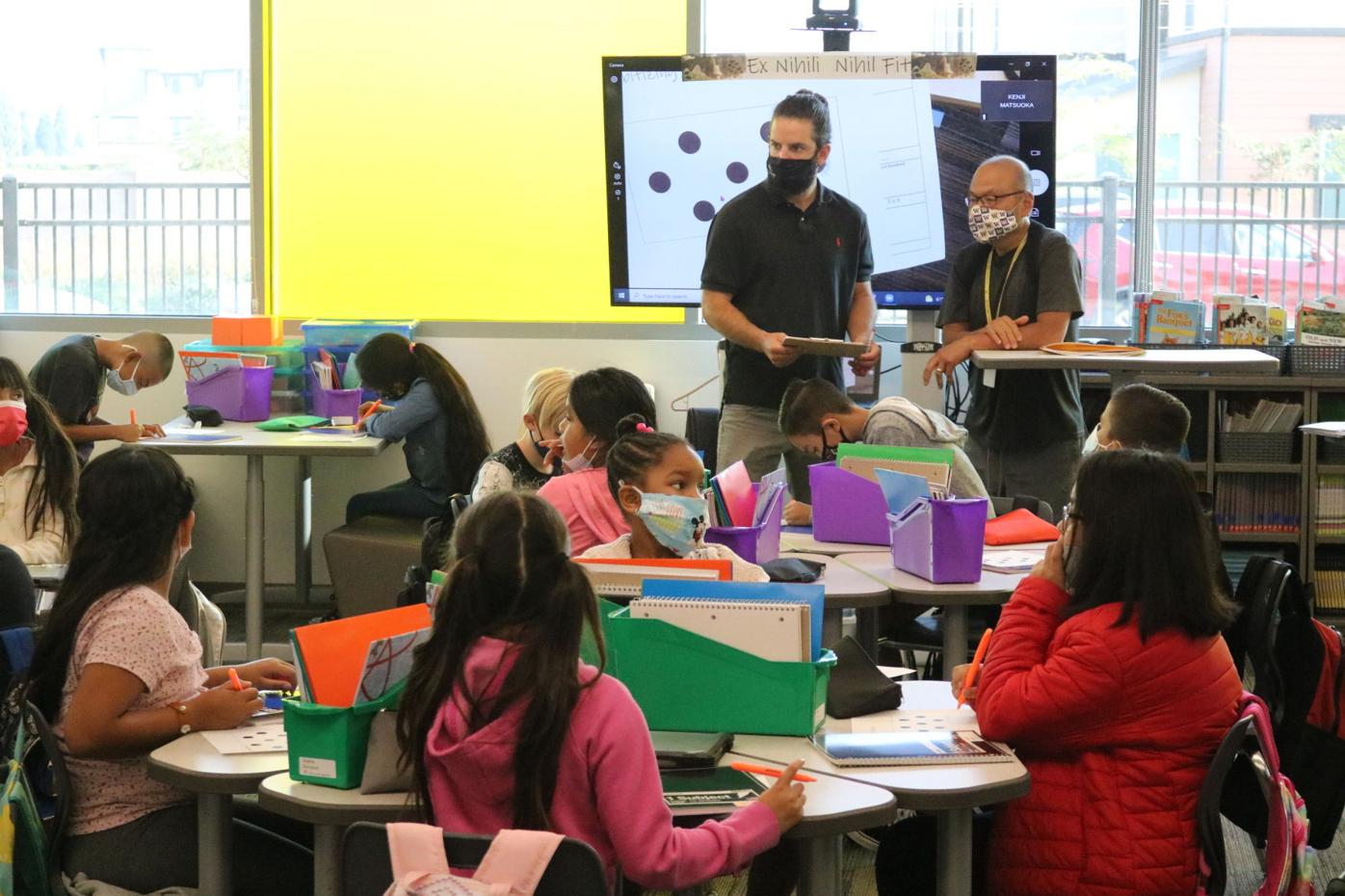 Teachers at Libbon Elementary in Santa Maria take attendance on the first day of school Aug. 13 to make sure all students are in the correct classrooms. 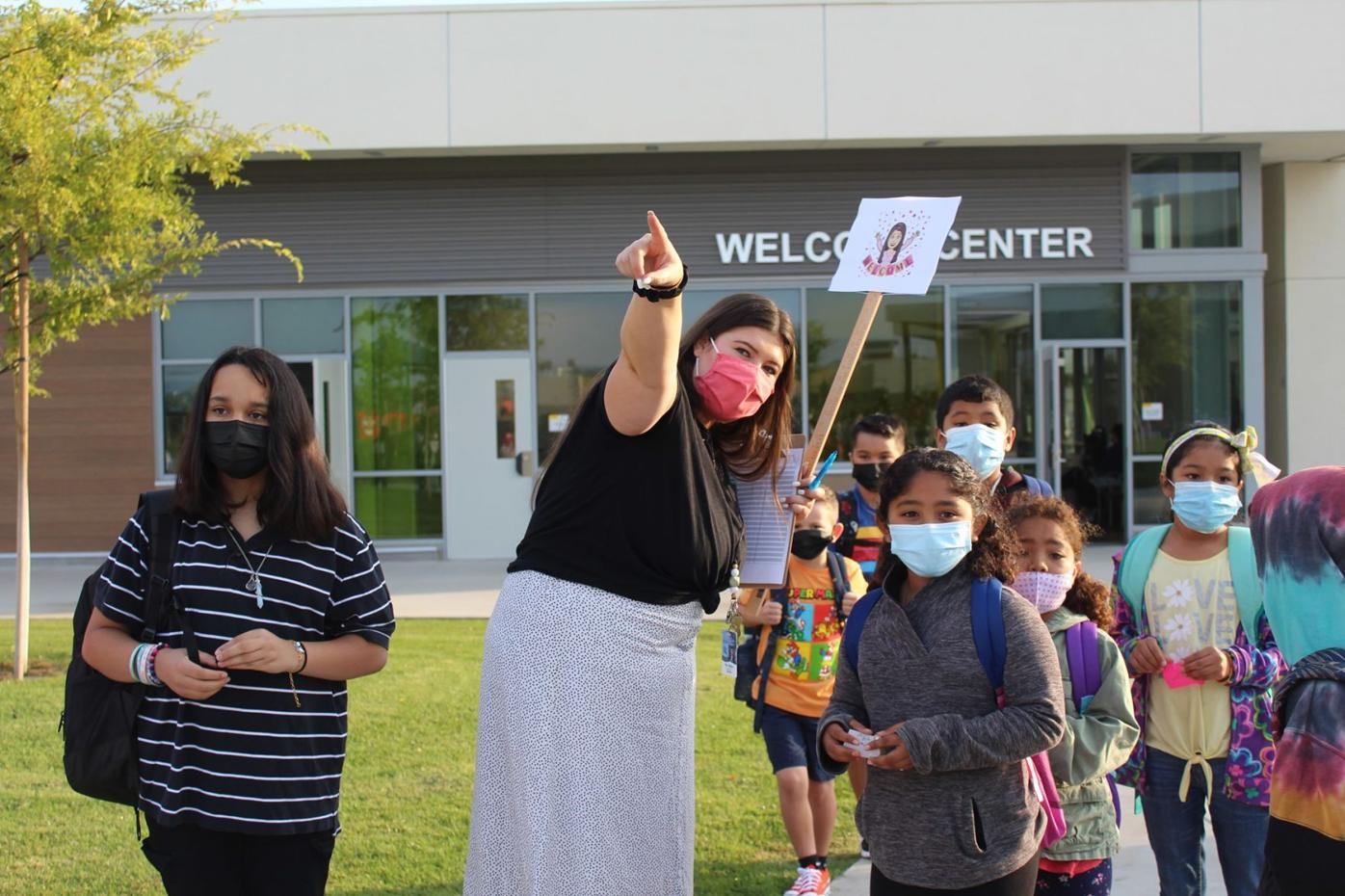 Students at Libbon Elementary School in Santa Maria tour their new campus with their teacher on the first day of school.

Teachers at Libbon Elementary in Santa Maria take attendance on the first day of school Aug. 13 to make sure all students are in the correct classrooms.

Students at Libbon Elementary School in Santa Maria tour their new campus with their teacher on the first day of school.

As dozens of students and staff test positive for COVID-19 and countless others quarantine out of precaution, an ongoing shortage of substitute teachers in the Santa Maria-Bonita School District is pulling other staff away from their responsibilities to keep day-to-day classroom operations on pace.

Yvonne Duran, a fifth-grade teacher at Robert Bruce Elementary, said four district-level staff, including on administrator, were on her campus Friday to fill gaps in classrooms, and that many teachers worry they may have been exposed to COVID themselves via positive students.

While a lack of substitutes is not a new issue in the district, Duran said the pandemic has exacerbated the situation, with more employees, from administrators to language aids, having to wear several different hats to keep classrooms open and running.

"This is anything but typical," Duran said. "It's the trickle-down effect of the lack of substitutes; administrators and coaches are forced to substitute, so they are not available to do their jobs. It’s so dire, that I requested to have my jury summons delayed because I can't imagine leaving my students right now, because there’s no substitutes."

The district — the largest in Santa Barbara County with around 17,000 students spread between 21 schools — had hired approximately 40 substitutes as of least week, but is looking to hire at least 50 more to meet the current need.

Majority of Santa Maria elementary, high schoolers back on campus; around 1% opt for online

"Many of our returning substitutes choose to only work at specific sites, or only a few days out of a week, or a month; so the more we can have in our pool, the better," said Bijou Beltran, assistant superintendent for human resources.

Between Aug. 5 and Sept. 1, district officials have received reports of 100 students testing positive, 76 of which are now eligible to return to school, and 26 positive staff, 20 of which have completed their required quarantine, according to Superintendent Luke Ontiveros.

Although the school year began Aug. 13, Ontiveros said the time frame extends back to include cases reported by parents prior to the start of school. So far, none of the 100 student cases have been determined to be the result of on-campus transmission, he said.

"Everything we have reported so far around students … have been cases that transpired outside of schools," he said.

Several districts, including Santa Maria-Bonita, have implemented strict classroom seating charts that are uploaded to a centralized database for staff to reference in the event of a positive student case.

In addition to confirmed cases, an unknown number of students and teachers are currently home from school due to COVID-19 symptoms or contact with a positive case.

One district teacher, who asked to remain anonymous out of privacy concerns, said they have had eight students gone from their class, some for multiple days. The teacher decided to get a COVID test after noticing a sore throat, received a positive result Friday, and is now in quarantine.

The teacher said although they have not been informed about positive cases in their classroom, they know many parents work and have less time to take their child to get tested to confirm a case.

"It wasn't a surprise, with so many of my students being absent," said the teacher, adding that the school's principal was the substitute for the class on Friday.

At Robert Bruce, Duran described one classroom that currently contains 10 students, after a positive case in the class resulted in every student within six feet being instructed to quarantine. On Wednesday, around 180 of the school's 950 students were absent.

As of this week, 21 school COVID-19 outbreaks are being investigated in Santa Barbara County, with an "outbreak" being defined as three or more epidemiologically linked cases, according to county Public Health spokeswoman Jackie Ruiz.

Ruiz declined to name specific schools with confirmed outbreaks, but said public health officials hope to share a regional breakdown of where outbreaks are occurring in the county in the coming weeks.

Kenny Klein, spokesman for the Guadalupe Union and Santa Maria Joint Union High School districts, declined to share the number of cases that have been reported in either district, citing privacy concerns.

"COVID has been an increasing daily challenge since the return of the majority of students and staff. Our schools are testing dozens of students and staff daily. Each site is working closely with [Public Health] to help with guidance, contact tracing and contact monitoring," Klein said of the high school district, which includes approximately 9,300 students between four school sites.

Along with a shortage of substitutes, the Santa Maria-Bonita district is also experiencing a lack of other classified roles, like custodians and instructional assistants.

"We’re definitely more strained, not just because of that (substitutes), but because there’s a shortage in all positions," Ontiveros said.

Besides the possible safety concerns prospective substitutes may have about teaching now, they also may be more tempted to teach in the nearby Lucia Mar Unified district, which pays subs between $170 and $190 per day compared to Bonita's $150 to $185 daily rate.

The substitute shortage is prevalent statewide, with the number of substitute teaching permits administered by the California Commission on Teacher Credentialing shrinking by around 25% between the 2018-19 and 2020-21 school years, according to reporting by CalMatters.

Despite the new challenges presented by in-person schooling during a COVID-19 surge, Duran said the situation is far preferable to the widespread distance learning of last year. She just hopes it's sustainable.

"To be able to be with kids in the classroom is night and day. The kids are doing great, they love being back in the classroom, so my greatest hope is that our district and community can make sure we stay open," she said.

This story was updated to correct a statement about the number of district administrators present at Robert Bruce Elementary on Friday.