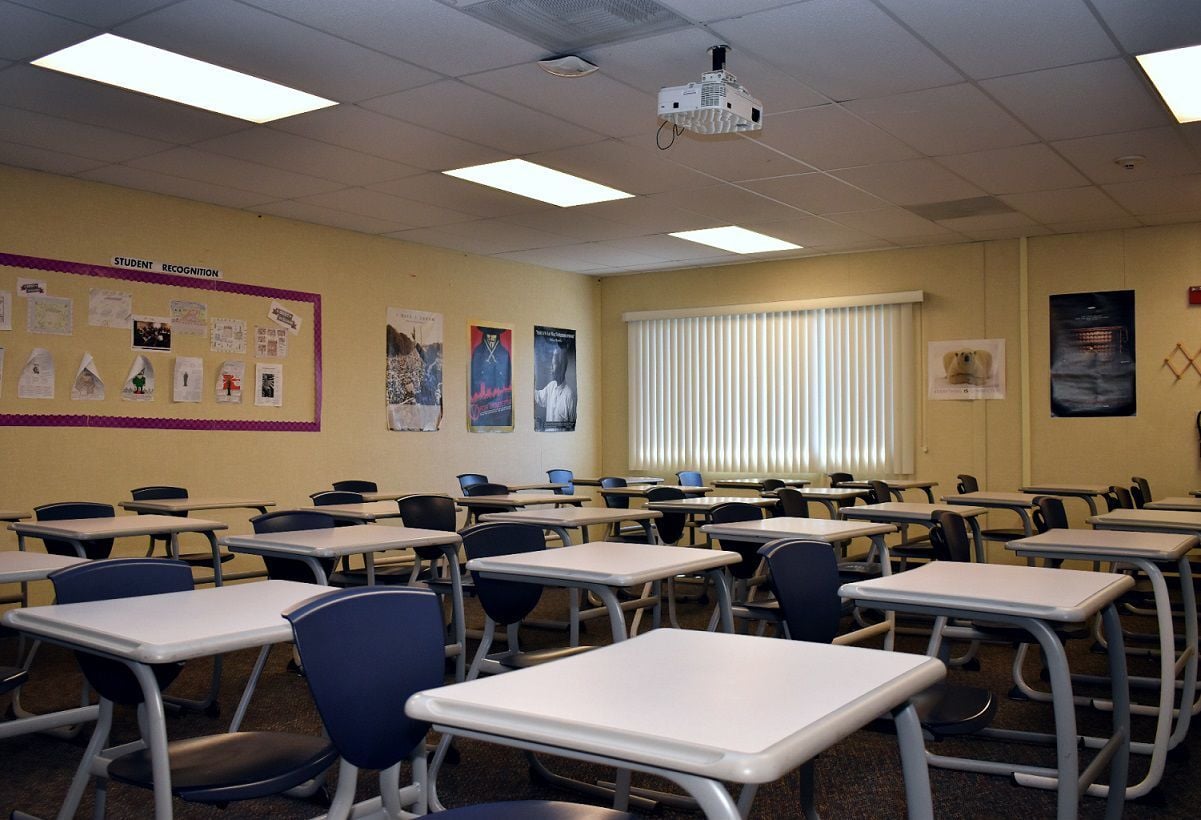 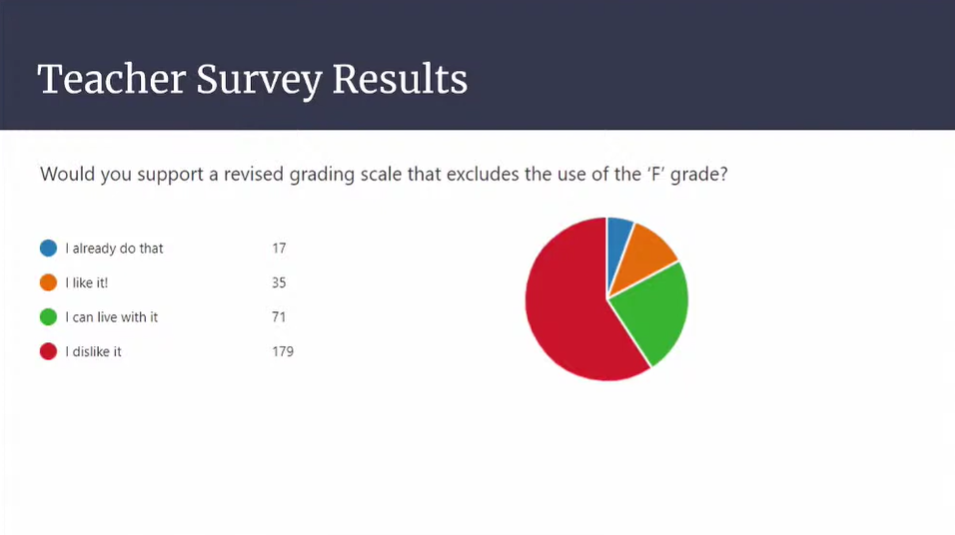 This screen grab of a presentation to the Santa Maria Joint Union High School District Board of Education on Thursday shows responses of teachers surveyed about the possibility of eliminating F grades for the 2020-21 school year. 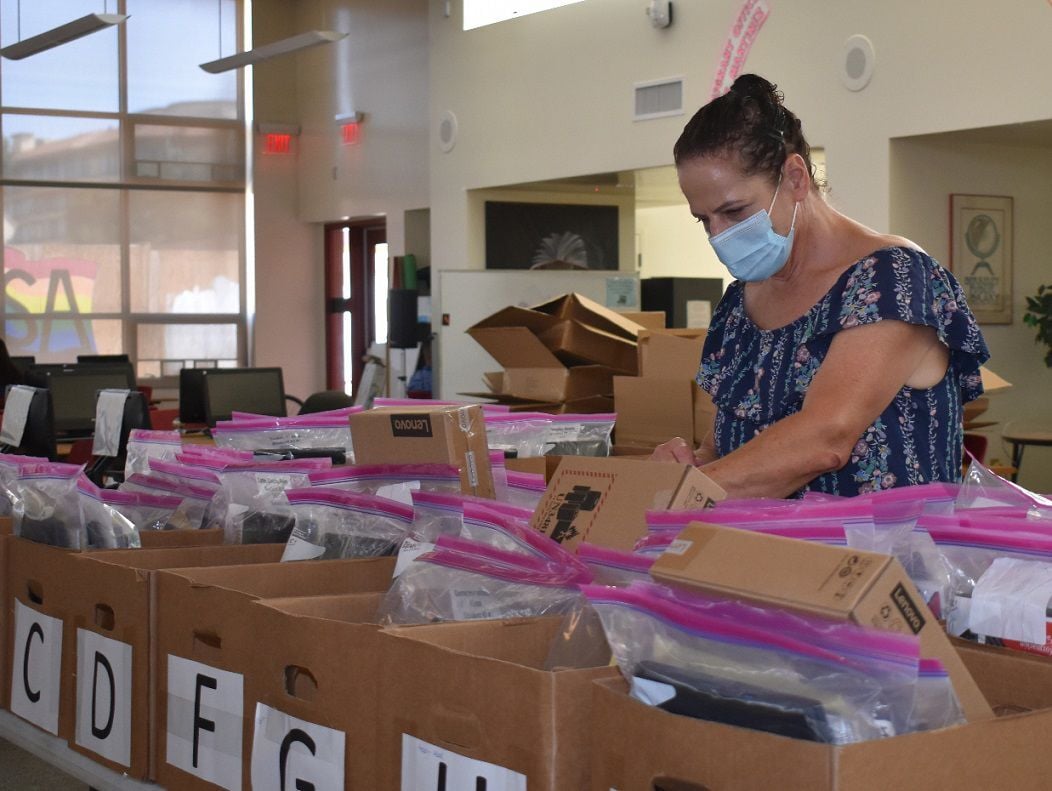 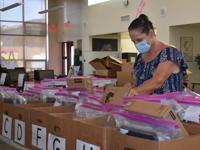 Library technician Rebecca Spendlove organizes laptops for students to pick up at Santa Maria High School on the first day of virtual classes for the 2020-21 school year.

Library technician Rebecca Spendlove organizes laptops for students to pick up at Santa Maria High School on the first day of virtual classes for the 2020-21 school year.

A new interim grading and graduation requirement policy in the Santa Maria Joint Union High School District has elicited criticism from teachers who say the changes are too lax and frustration from students calling for more decisive systematic change during distance learning.

The new policy, introduced earlier this month and adopted by the district Board of Education on Thursday, includes three strategies to increase student success and recognize learning progress in response to high failure rates in the fall and other distance learning challenges.

These options include the application of second semester grades to the first semester, permitting graduation with the minimum state credit requirements on a case-by-case basis, and the use of "incomplete" or "no-mark" options.

Students, however, said these options do not provide the support they need. Following the board's first discussion of the policy in early February, students in youth organization Future Leaders of America shared how the practice of assigning regular letter grades during a pandemic was disappointing.

Students claimed that some of the options presented by the board, such as replacing first semester grades with higher second semester grades in yearlong classes, are in place in a variety of classrooms and likely won't make significant change.

In a survey of approximately 300 district teachers presented to the board, 7% of teachers said they already allow this option, with the majority of other respondents saying they would be open to implementing it.

Future Leaders of America also submitted a letter to the board Thursday requesting that the district eliminate F grades in distance learning, a policy adopted by the Santa Barbara Unified School District but so far refused by the Joint Union district.

"Most of the academic year has already passed and students are anxious about their grades this past year and need relief now. Santa Maria is trailing far behind other school districts in implementing systematic change," Education Equity Santa Maria Youth Organizer Angel Lopez said in the letter.

While the district has referenced distance learning resources such as technological support and the implementation of a Wellness Week, students said the options are not much help in reality.

Reyes, along with fellow Santa Maria High School student Jasmin Herrera-Ramos, both said they have struggled immensely with internet connection throughout the year, adding they did not know they could use Wi-Fi hotspots until months into the school year.

Several district teachers expressed resistance to relaxed grading policies, insisting during public comment that they were not to blame for recent drops in academic success.

Some asked that the policies be applied only to special cases rather than being implemented across the board.

"It is such a broad move for everyone, but it is only needed for a small number of students on a case-by-case basis. Unfortunately, it doesn't seem like that’s what would happen," said Christie Ortiz, a physical education teacher at Righetti High School.

Matt Provost, Righetti math teacher and district faculty association president, said he would not feel comfortable applying changes to students' grades under the new policy, enforcing his prerogative to decide scores for his students, pandemic or not.

District administrators attempted to get meeting attendees on the same page, reminding teachers that the policy is not meant to override their authority in the digital classroom.

Pioneer Valley baseball has some 'unfinished business' to take care of

"This is not about pointing fingers or assigning blame," Assistant Superintendent John Davis said. "What this is about is trying to provide a pathway forward. We believe these proposals will help, that they will serve to motivate students, [and] also honor the teachers’ prerogative."

After much discussion, the three policies were adopted unanimously by the board. At the end of the meeting, board member Amy Lopez also requested that the board discuss the option of eliminating Fs in the future.

In teacher surveys, 58% of respondents said they were not comfortable with eliminating Fs, 5% said they have implemented this policy, and 37% said they would be OK with it.