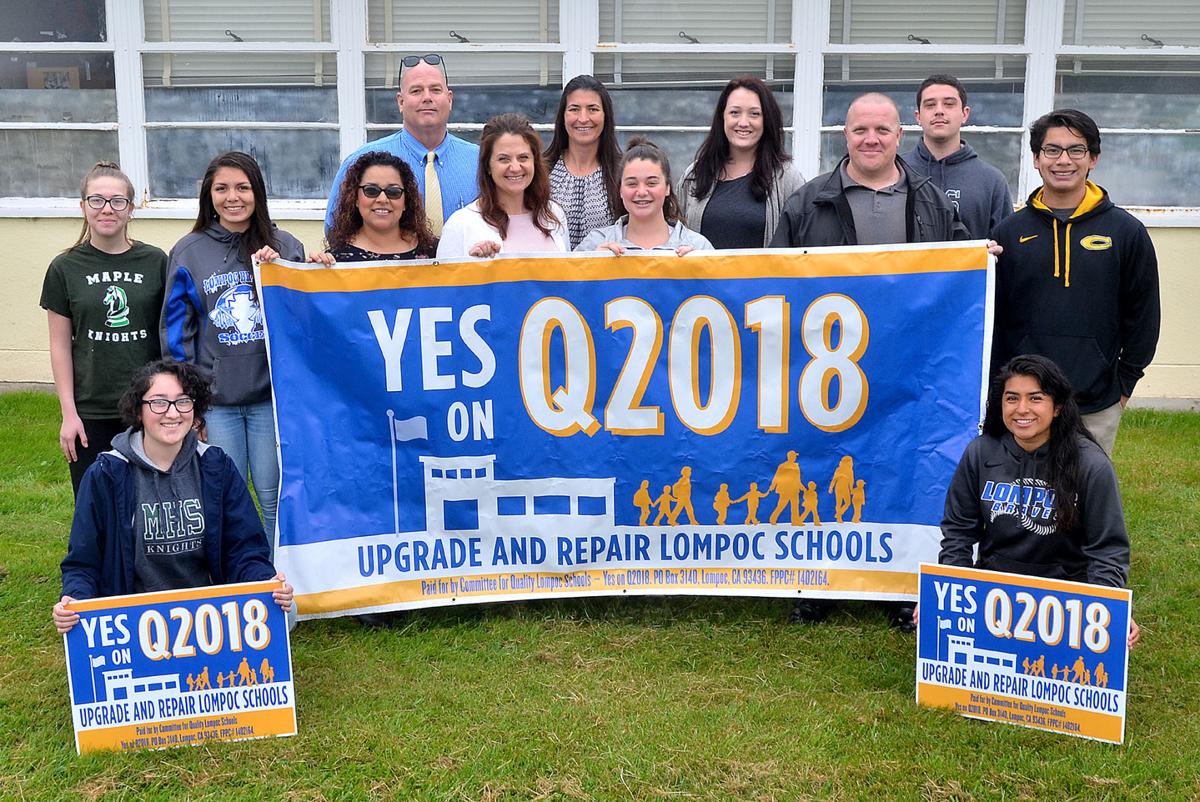 Measure Q2018 campaign committee members and volunteer students show off a banner and lawn signs that will be used in promoting the bond measure to improve local schools. Measure Q will be on the June 5 ballot. 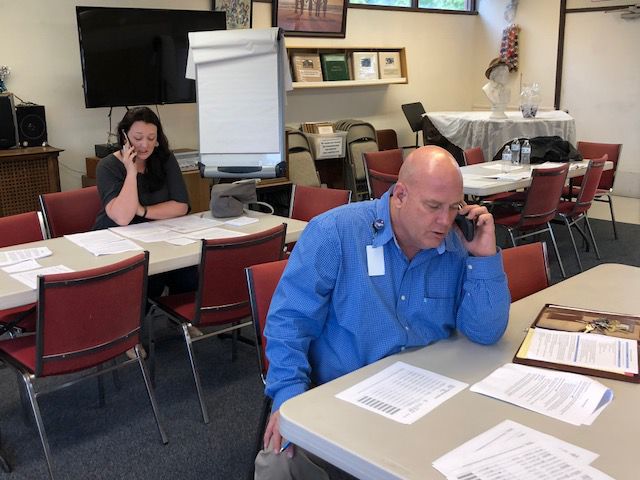 Doug Sorum works the phone bank in support of Measure Q2018, the Lompoc school bond that will be on the June 5 ballot.

As this year’s primary election draws closer, a group of local school supporters and students is kicking its efforts into high gear as it tries to inform and drum up support for what could be the most significant measure that will face Lompoc voters on the June 5 ballot.

Measure Q2018 -- a $79 million schools improvement bond -- will be put before Lompoc voters less than two years after a similar school bond measure, Measure L, failed in the November 2016 election. Measure Q differs from that 2016 measure in one very critical way, however: This year’s bond needs just 55-percent approval from voters to pass, while Measure L required support from 67 percent of the community.

That difference has Lompoc Unified School District officials and supporters a lot more optimistic for this year’s effort, which has been at the center of a much more organized and focused campaign.

“This time around, believing that we have a much more realistic opportunity for Measure Q to pass, we worked with community members to form an independent outside committee, ‘(Committee) for Quality Lompoc Schools,’ which has been engaged in a full slate of activities, from giving community presentations, to distributing informational flyers, printing and distributing posters and yard signs, to phone bank outreach to potential voters,” said John Karbula, an assistant superintendent with LUSD.

An example of that increased outreach will be on display Sunday when campaign committee members Teresa Acosta, Doug Sorum and Bree Valla — all of whom work for LUSD — will go over the bond measure during a free community presentation scheduled to begin at 11:15 a.m. in the Fellowship Hall at Valley of the Flowers United Church Christ, 3346 Constellation Road.

It is expected that the presentation will cover some of the critical needs within LUSD that could be addressed by the bond, which, if successful, would make the district eligible for about $40 million more in matching state funds, according to LUSD officials.

Although Karbula noted that the reaction he’s seen toward Measure Q has been mostly positive, there has been some pushback to the bond measure from some within the community.

Criticisms expressed in recent months on social media include a desire for no new taxes, an apparent feeling that LUSD could do a better job managing the money it already has, and the belief by some people that nonparents shouldn’t have to help pay for schools.

In response to those concerns, Karbula noted that Measure Q will not impose any new taxes but will, instead, extend the payments for Measure N, the most recent successful Lompoc school improvement bond, which passed in 2002.

According to the abbreviated ballot measure text, the tax would be imposed on property owners at a rate of about 6 cents per $100 of assessed value, or $60 per $100,000. This is expected to generate about $7 million annually through 2054.

As for the comments about money management, Karbula said the district “push(es) back strongly against the notion that (LUSD) has ever mishandled either bond funds or general fund dollars.”

He cited the Measure N Citizen’s Bond Oversight Committee, an independent group that was formed, as required by the state, to ensure that bond funds are spent for the purposes identified in the ballot measure. That committee issued its final report in 2014, a report that lauded LUSD officials for the district's monitoring of the bond revenue.

“There was no use of Measure N funds that was not in the ballot language,” Karbula said. “Our general fund budget is posted on our website where anyone can see it and review it. Like every other school district in the state of California, we are overseen by the County Office of Education regarding fiscal accountability. We have never had anything other than fully certified budgets and retain a healthy reserve as required by California state law and an additional reserve required by our local board of education.”

He went on to note that the budget is presented to the board quarterly and that recent outside audits, which are conducted annually, have found the district “to be fully compliant with all federal and state budgetary requirements.”

“The notion that any taxpayer money is not properly managed is simply untrue,” Karbula said. “We take our status as public servants with the utmost seriousness and diligently work to provide the best possible education for our children within the realistic constraints of our general fund budget.”

In response to the idea that people without children shouldn’t have to financially support public education, Karbula said “the best perspective is to say that we respectfully disagree with that point of view.”

“School district employees are public servants, dedicated to the notion that public education is a bedrock foundation of our democracy,” he said. “Our perspective is that in supporting not just the youth of today but generations to follow, we are serving the citizens of Lompoc by offering educational opportunity (to) young people who will be vital and vibrant contributors to society for many generations to come.”

Throughout the lead-up to the November 2016 election, LUSD officials pointed to a facilities needs list that topped $90 million. Those needs have only gone up over the past two years.

According to the needs assessment in the most recent LUSD Master Plan that was approved by the board of education this month, the district now cites about $220 million in needed upgrades or improvements. That total almost doubles what the district would receive from Measure Q, plus the estimated maximum of $40 million in state matching funds.

“So, Measure Q would go a long way toward meeting our most critical needs, but would not fund the entire Master Plan,” Karbula said. “It is also vital to emphasize (that) Measure Q will serve all schools. Every school in every location has significant needs.”

Karbula said it was because of those pressing needs that the district chose to have the bond placed on the June ballot rather than wait for the November election, a decision that was supported by the board of education.

“We believed that our needs were so great, we needed to go as soon as possible following the 2016 ballot measure,” he said.

Those needs have been especially apparent during storms over the past few years, which have caused electrical outages and water and wind damage, among other issues.

In what was a timely coincidence, school officials had to use buckets and trash cans to catch rainwater inside campus libraries and cafeterias, among other facilities, on the same day in March that the Committee for Quality Lompoc Schools kicked off its campaign.

“Many people run to social media right away and sometimes aren’t sure of the correct information and right away just think, ‘Ugh, more taxes,’” Teresa Acosta, one of the aforementioned committee members, said at that March 22 campaign launch gathering. “I don’t want to pay more taxes, either. But if I’m going to pay taxes, it should be used to benefit not just me but 10,000 kids and their families and all our staff. We had (staff members) going to the bathroom today with the roof leaking. Who wants to go to the bathroom with water dropping on them?”

Optimism remains high among the committee members and the 100 or so volunteers who have offered to help the campaign, but they needn’t look far to see what failure looks and feels like.

LUSD Superintendent Trevor McDonald has said he believes that coming up short in 2016 helped galvanize and energize school supporters for this year’s campaign.

“If it takes us maybe losing first to understand that we really need to win, I’ll take it,” he said at that March campaign kickoff meeting. “Now, I think everyone understands the massive effort that we need to put in our schools.”

The numbers would seem to suggest that the campaign supporters have a reason to be optimistic. The 2016 bond measure received support from 58.5 percent of Lompoc voters, which put it in the odd position of failing despite drawing higher levels of support than successful school bond measures that year in Santa Ynez, Santa Maria and Orcutt. That same level of support this year would be considered a runaway success for the measure.

If the bond fails to receive “yes” votes from at least 55 percent of voters, however, the impact on schools would be clear, according to Karbula.

“We believe it is a very valid cause and we believe the community will support Measure Q,” he said. “That said, there is only one truthful answer to the question of what will happen if the bond does not pass: The students and staff of Lompoc Unified School District will continue to work and attend school in substandard, aging facilities and the district will not have the capacity to do more than address the most pressing of needs.”

Less than a month after a Lompoc school bond failed in the California primary election, the Lompoc Unified School District board of education …

For the third time in the past two years, Lompoc voters will be tasked with deciding the fate of a bond measure that could spur significant up…

As a former football player, Lompoc Unified School District Superintendent Trevor McDonald uses sports analogies when he looks back on the dis…

Potential school bonds, a recent investigation by the Santa Barbara County civil grand jury and finding and retaining teachers were among a ra…

A little more than a month after voting down the prospect of placing a schools improvement bond on the November ballot, the Lompoc Unified Sch…

After more than nine months of consideration, the Lompoc Unified School District Board of Education on Tuesday formally voted down the prospec…

For proponents of a $79 million Lompoc schools improvement bond, the third time turned out not to be a charm.

Teresa Acosta, a longtime Lompoc volunteer and LUSD employee, has been announced as a nominee for this year's Latino Legacy Awards, which recognize Santa Barbara County community leaders for their accomplishments and support of the Latino community.

Measure Q2018 campaign committee members and volunteer students show off a banner and lawn signs that will be used in promoting the bond measure to improve local schools. Measure Q will be on the June 5 ballot.

Doug Sorum works the phone bank in support of Measure Q2018, the Lompoc school bond that will be on the June 5 ballot.