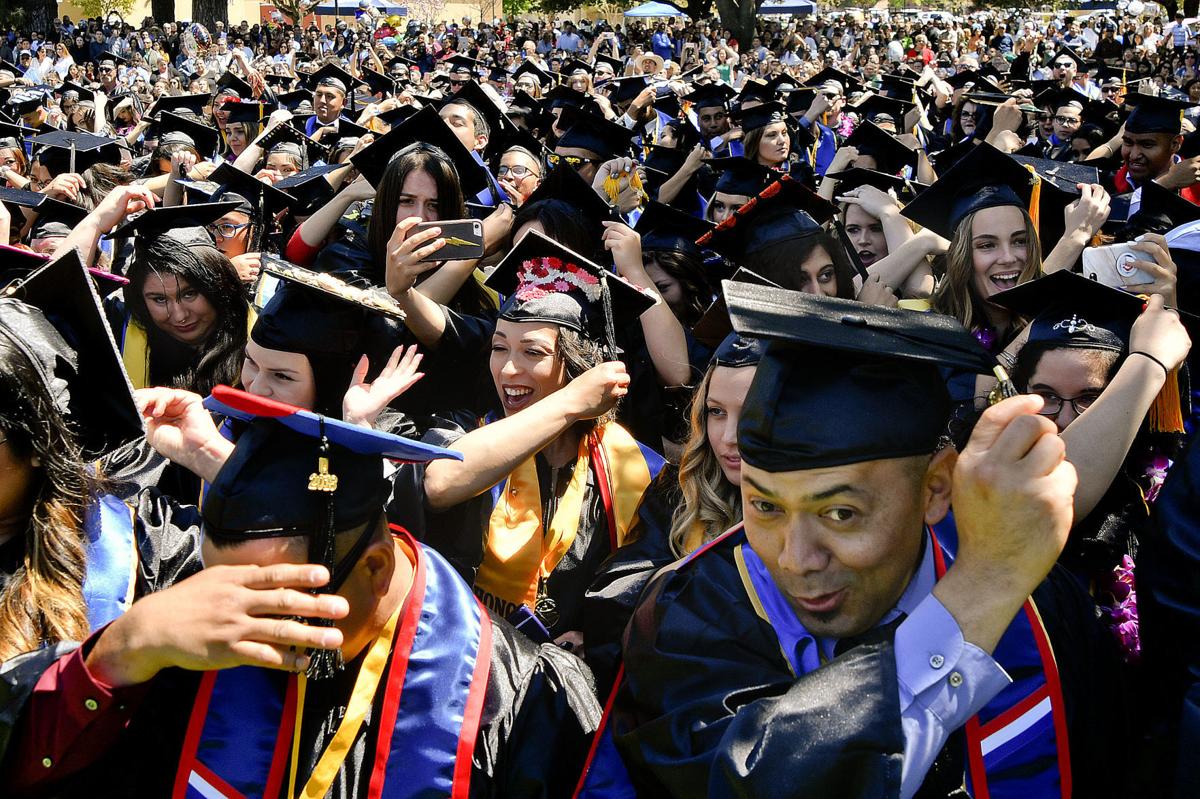 Hancock College graduates turn their tassels and celebrate at the end of Friday's commencement ceremony. 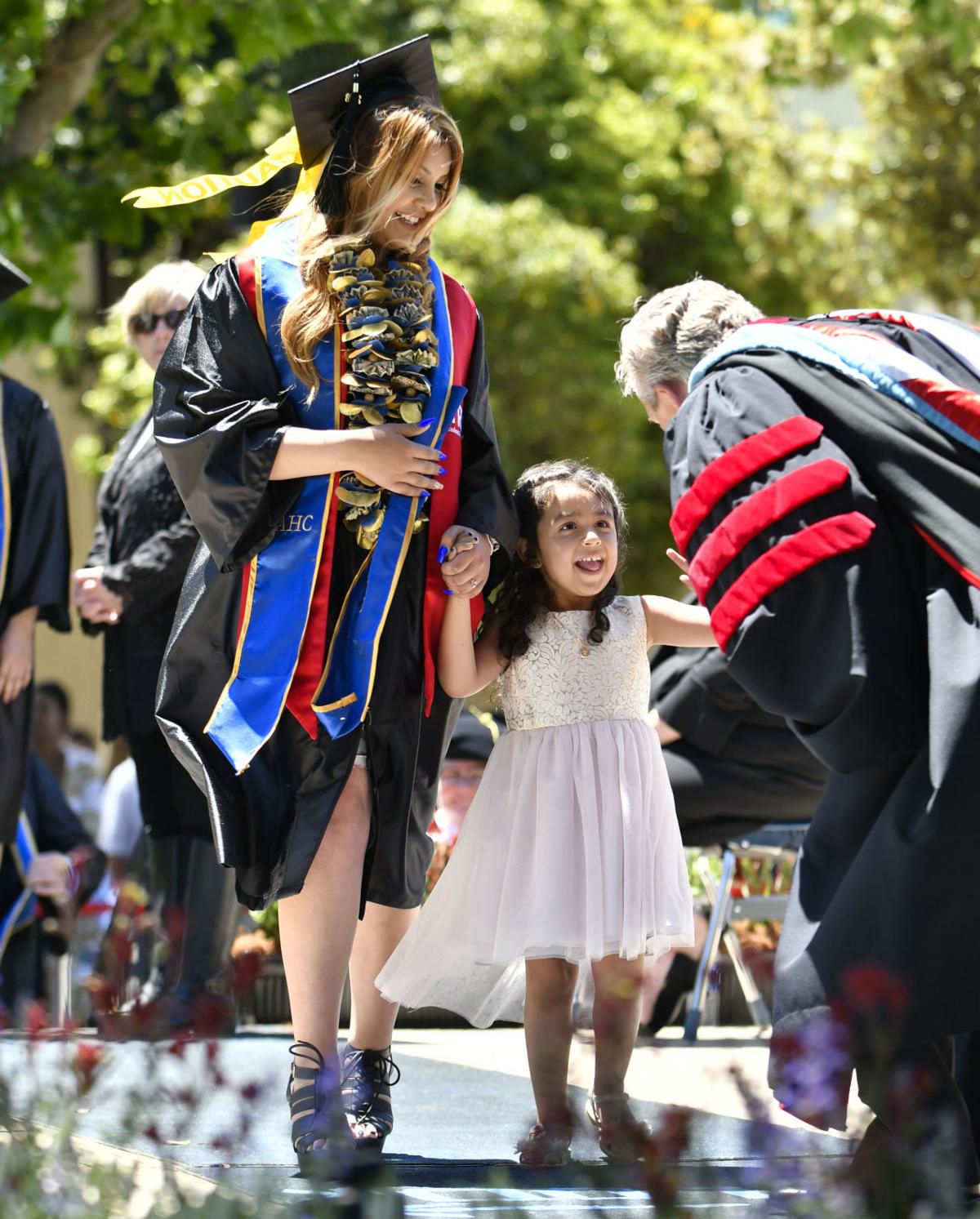 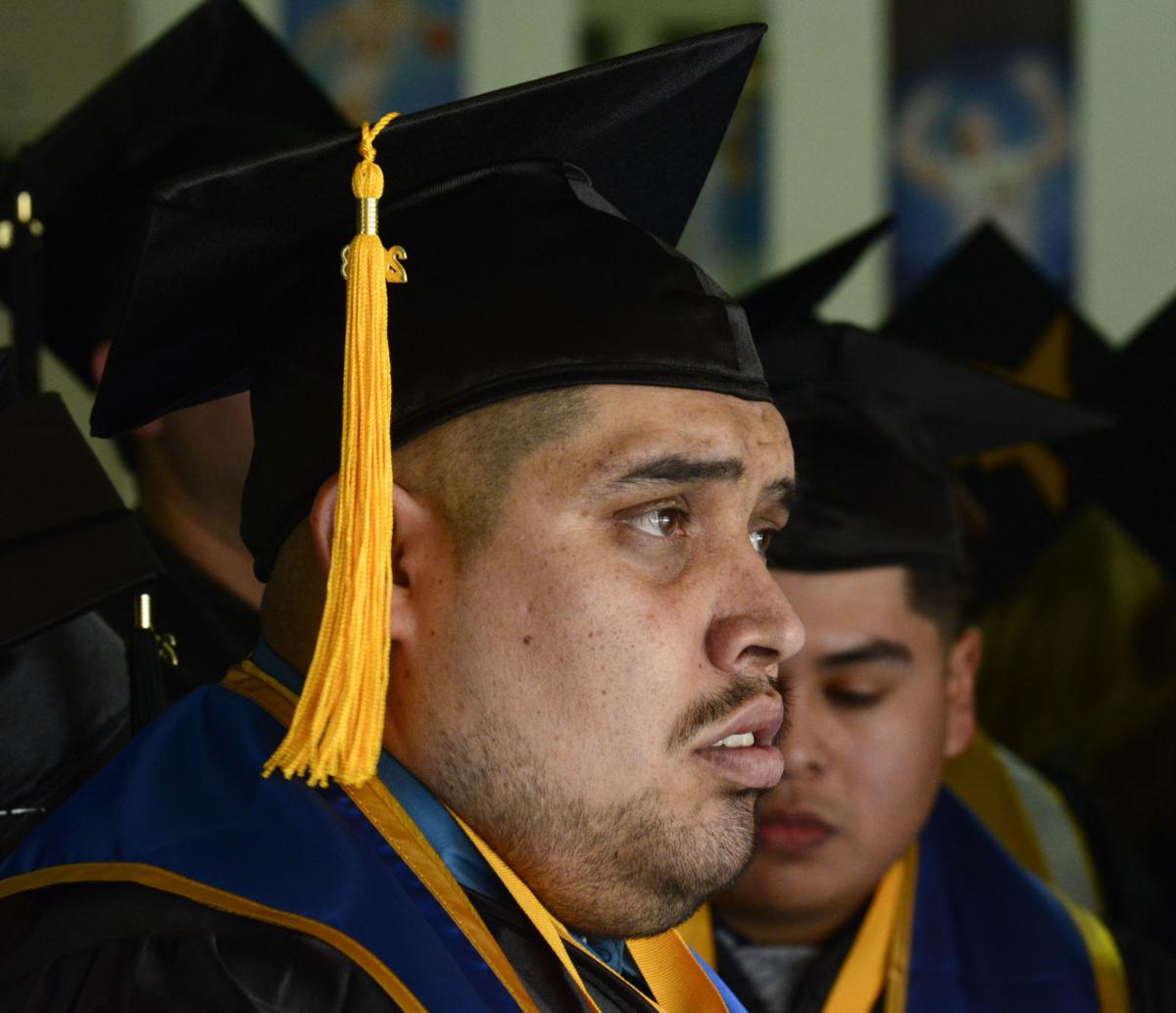 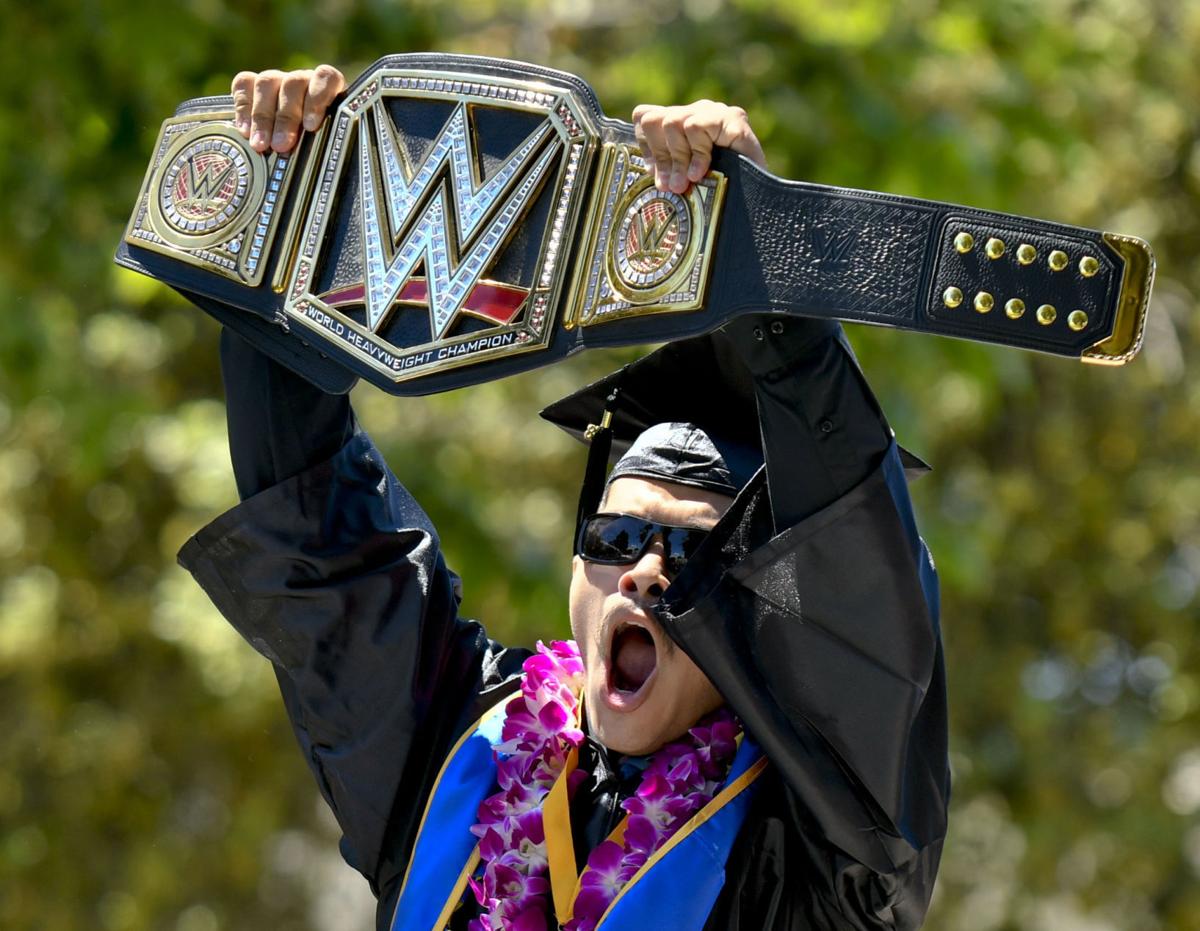 Hancock College graduate Anthony Cuevas holds up his championship belt after he received his diploma during Friday's ceremony. 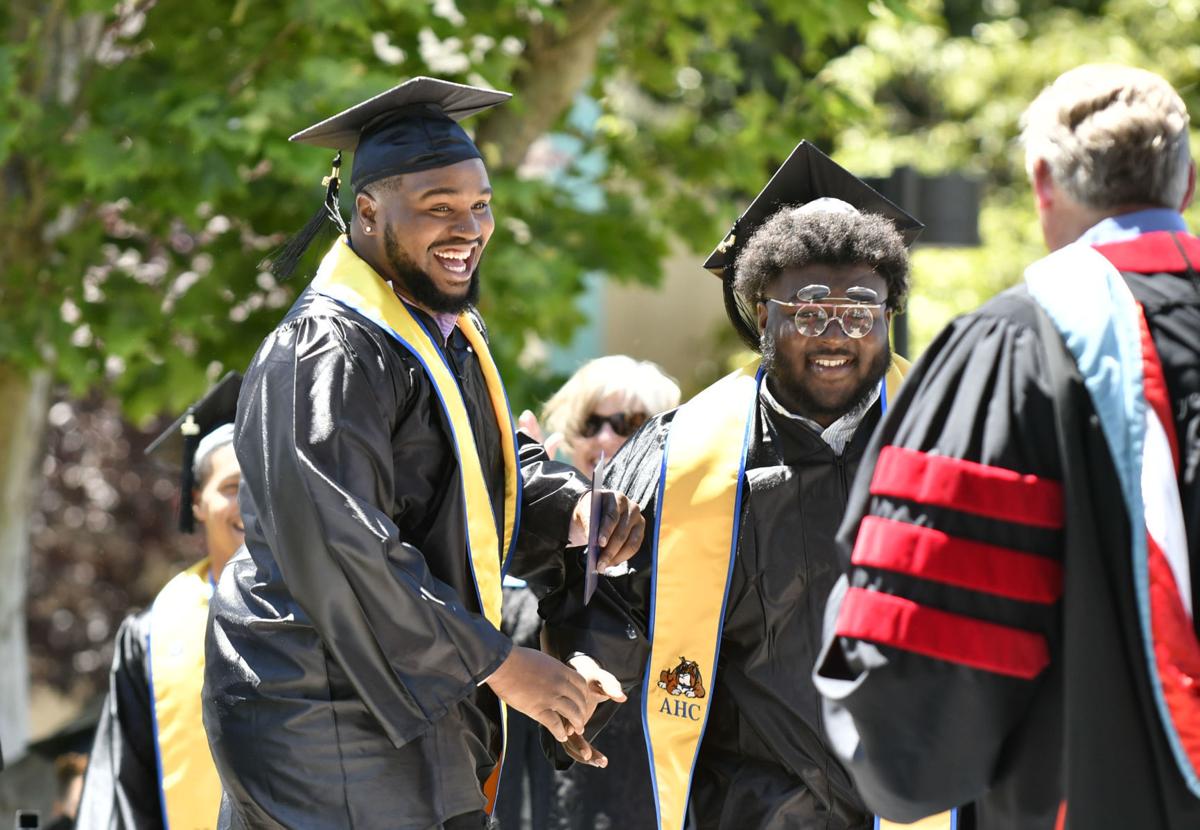 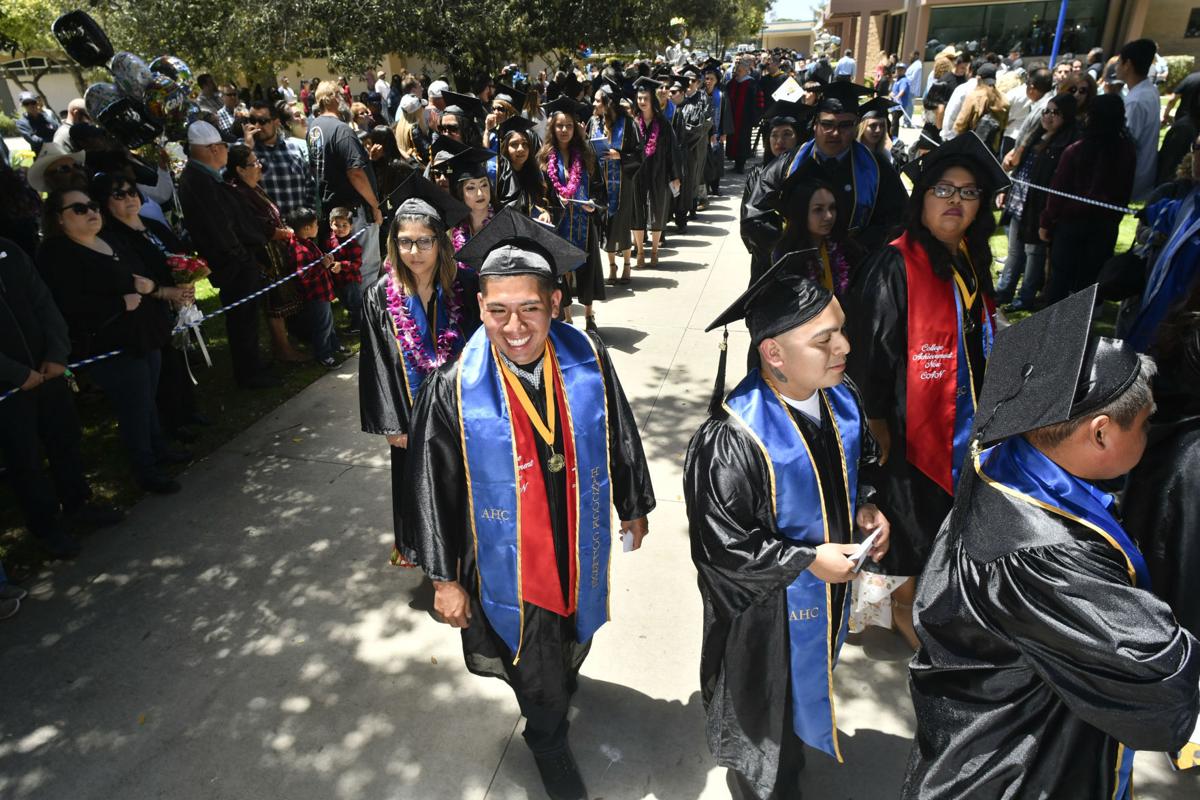 One class at a time. That's how Daniel Viveros did it.

On Friday, Viveros, an aspiring immigration attorney, walked the Hancock College commencement stage — six years after enrolling in his first class. Taking one night class per semester for the last six years, Viveros graduated with associate degrees in political science and liberal arts, and will transfer to UCLA in the fall to pursue a bachelor's degree in political sciences.

"I wanted to help my mom," he said of his decision to pursue — and complete — his education.

At 12, Viveros' mother was injured in a workplace incident, prompting him to balance his education while caring for her and his younger brother. Eventually earning his high school diploma through independent study (he was expelled from high school for fighting), Viveros worked 12-hour days as a tiler, construction worker or picking strawberries in the fields to provide for his family.

"I felt like I wasn't able to make it, but the staff at Hancock helped ... and inspired me to pursue an education," he said. "Even though it took me six years, they still pushed me to keep going forward — one class at a time."

According to Nohemy Ornelas, Hancock's associate superintendent and vice president for Student Services, 1,009 students graduated during Friday's commencement — a record number and a 2-percent increase over last year. The college also bestowed the highest number of nondegree certificates, 853, in a six-year period — a 4-percent jump compared to 2017.

"Whether you're going to continue your education at the university level or start a new career, today is the day that marks the start of your new journey," Hilda Zacarias, president of the college's board of trustees, told the graduates.

Returning to school after the birth of her fourth child, Nancy Ramirez's four-year part-time education culminated Friday when she was granted two degrees — an associate in math and science, and a second in behavioral and mental processes.

An aspiring nurse bound for Cal State University, Chico in the fall, Ramirez wanted to demonstrate to her children (one of whom will be accompanying her at Chico) that it is possible to achieve your dreams.

"I wanted to show them that you have to keep on going no matter what," she said. "I want to be the primary example for them to look back and say anything is possible no matter what stage you are in life."

Delivering the commencement address to the eager graduates, Hancock College President/Superintendent Kevin Walthers told the crowd that the degrees and certificates conferred would prove transformative for students and their families.

"Compared to their peers with a high school diploma, the graduates sitting before you are more likely to vote, will see their lifetime earnings more than double and will engage in civic activity at a higher rate," he said.

"They are less likely to be unemployed, more likely to have stable family lives and will have the opportunity to enjoy a higher standard of living. More importantly, they will on average earn $400,000 more over their careers than their peers without a degree."

As members of the Class of 2018 prepare for the next stage of their lives, longtime physics professor Linda Metaxas shared some advice. Joining the faculty roughly 20 years ago, Metaxas said she will begin the next phase of her life — retirement — as an art student at Hancock College.

"Life is rarely a straight path," she said, adding that for her teaching was something new.

A former social worker who went back to school after 20 years, Metaxas reminded graduates to treat each obstacle as an adventure and embrace every opportunity to try something new.

"What should you do if you run up against disappointment? Certainly don’t give up ... but try a new direction," she said. "If one door closes on you, keep your eyes open for another one to open."

Hancock College graduates were encouraged to decorate their mortar boards for Friday's ceremony.

1,009 students graduated during Friday's commencement for Hancock College — a record number and two percent increase over last year. The colle…

Allan Hancock College graduated the largest class in its history and thousands of students, families and friends gathered on the Commons to ce…

The cost of education kept Annalise Ketz, a 2014 graduate of Nipomo High School, from enrolling at a four-year college.

Righetti High School senior Kush Patel was on the way to Rhode Island with his father when he got the news.

Hancock College graduates turn their tassels and celebrate at the end of Friday's commencement ceremony.

Hancock College graduate Anthony Cuevas holds up his championship belt after he received his diploma during Friday's ceremony.