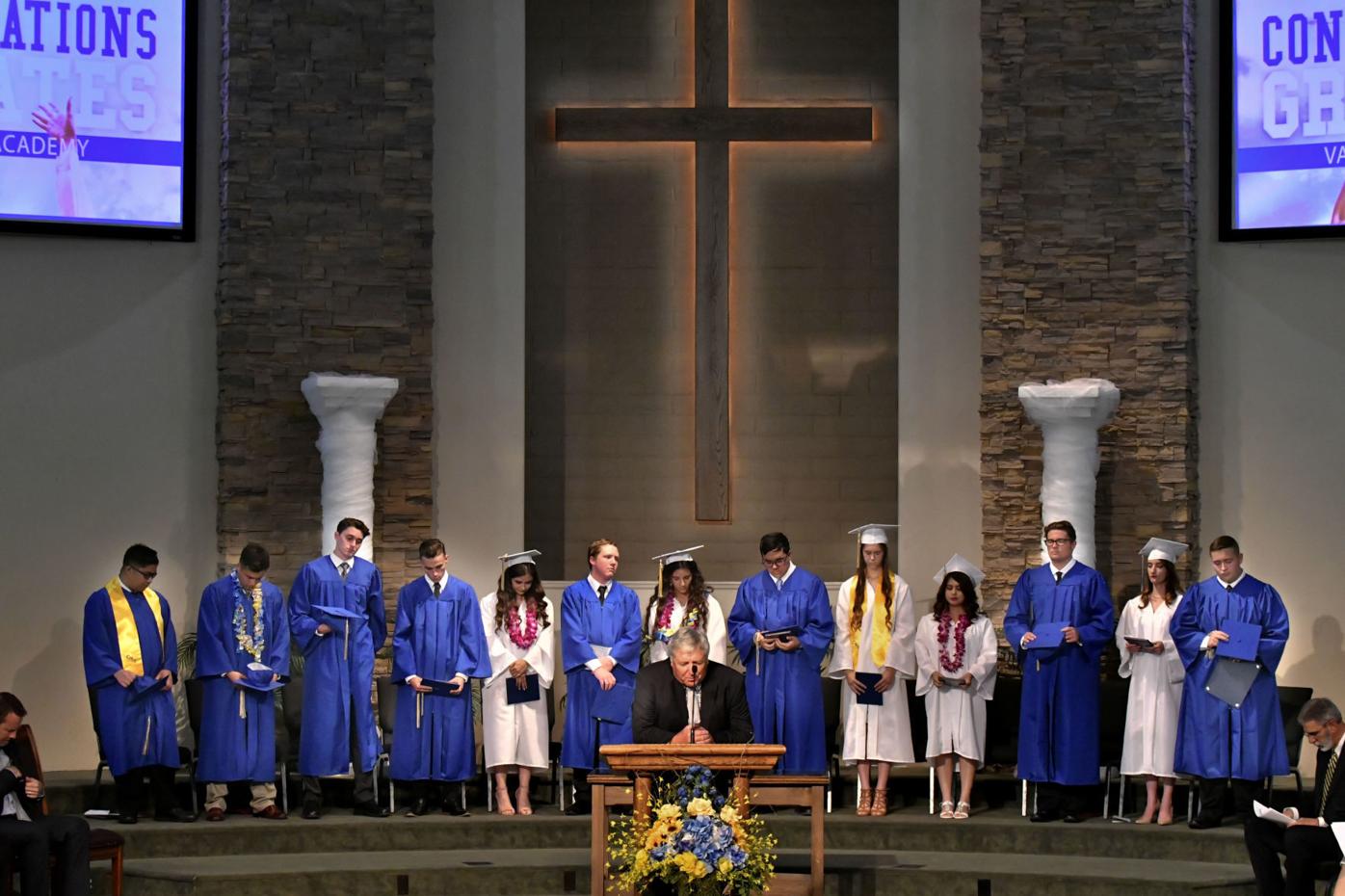 Valley Christian Academy graduates pray with Steve Conklin at the end of the ceremony on Friday evening. 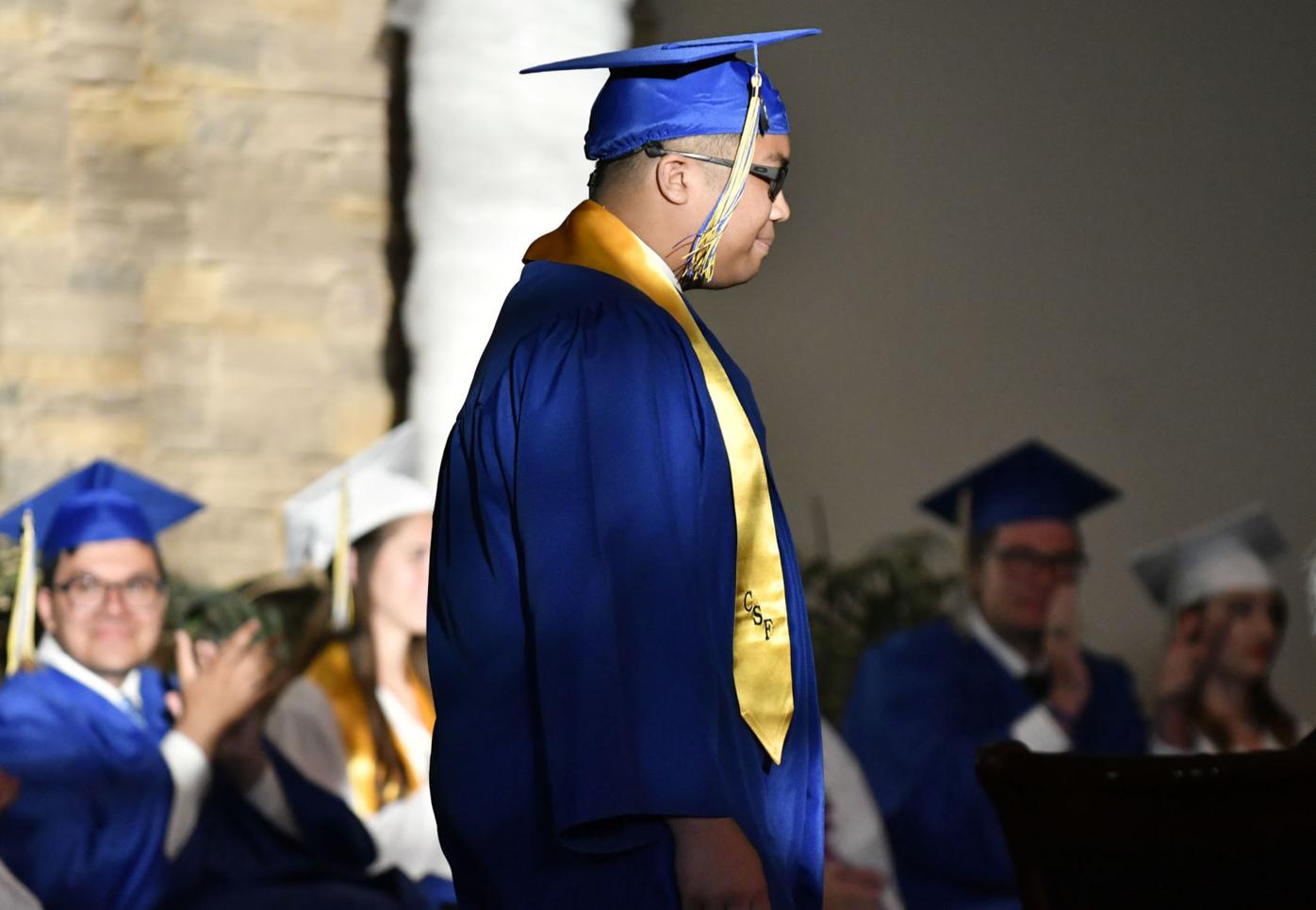 Valedictorian Christopher Bracero goes up to deliver his speech during the Valley Christian Academy graduation ceremony on Friday evening. 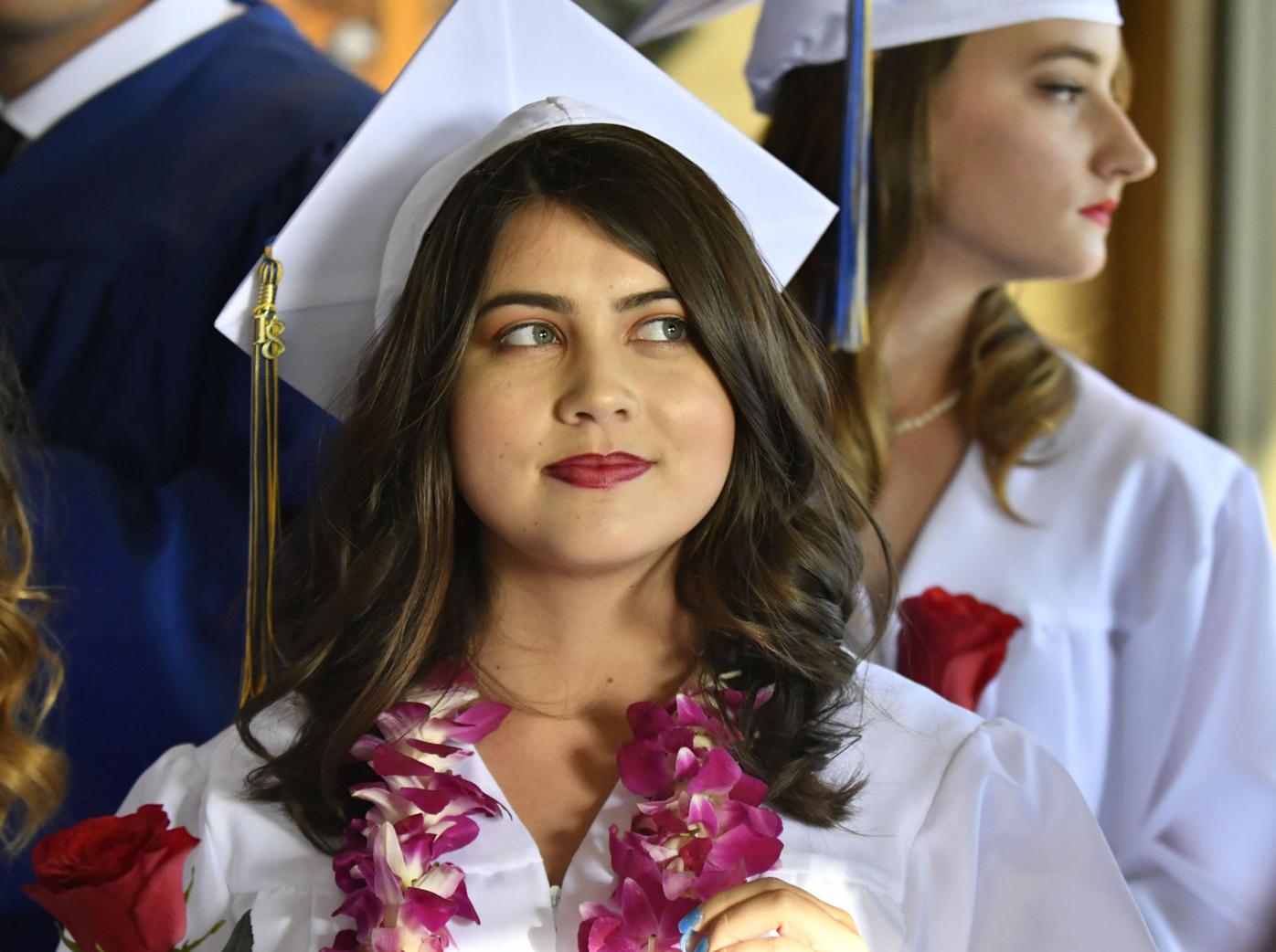 Valley Christian Academy graduates pray with Steve Conklin at the end of the ceremony on Friday evening.

Valedictorian Christopher Bracero goes up to deliver his speech during the Valley Christian Academy graduation ceremony on Friday evening.

Twelve students from Valley Christian Academy — and one from First Baptist Christian School's independent study program — graduated Friday night, prepared for tests of faith and devotion by their Christ-centered education.

"This class is a close class," said Valley Christian Academy Principal Charles Mason. "They get along really well together. Several kids in the class are fun personalities."

At a graduation rehearsal that morning, Mason told the students that the Scriptures and missives they've read during their education will shape the way they approach future opportunities, obstacles and decisions. Largely untested up until now, their faith will guide them down a righteous path for the rest of their life.

"Faith has to be something personal," he said. "It can't be something you got from your parents, teachers or anybody else. Will you seek God's direction or make decisions off the cuff?"

Part of a tight-knit group that had schooled together and matured in the classroom, some graduates have known each other since preschool. Others joined in elementary, middle or high school. Regardless of when — or how long — they had been enrolled, all said they were looking forward to taking their next step.

"We're excited to get out of here," said Nick Dyer before his graduation. "High school is done."

Bound for Fort Jackson in Columbia, South Carolina, Dyer, a Santa Maria Valley native who will enlist in the Army as a network communications specialist, said he's waited more than a decade to leave the area.

"I've been going to school for 15 years and it's time to change that," he said. "Finally, I get to leave this place."

Transferring to Valley Christian Academy at the start of his senior year, student body President Jarrett Smith said the small class size helped him form a long-lasting group of friends. Though he, like others, is excited to walk the stage, he said he will miss being in regular contact with friends.

"These are the friends you grew up with and are great people to be around," Smith said. "You don't know how many more times you'll get to hang out with them again."

Structured similarly to other graduations, Friday night's ceremonies included speeches by the class valedictorian and salutatorian — Christopher Bracero and Marcos Cardenas, respectively — and testimonies by Smith and Dominic Porpiglia.

"Although these last four years might have felt like forever, when I take a look back, I realize that no time has gone by at all," Cardenas said, encouraging his class to make the most of their futures.

"There's no more coming back to high school," he said. "This is a whole chapter that we won't be able to return to. I encourage you to not let this time go wasted. We're going to be looking forward for the rest of our lives."

Bracero, who will enroll at Westmont College this fall, told graduates to serve God — and others — with the talents and skills he has bestowed on them.

"God has a plan for each of us, and those plans may be different from ours," he said. "As we go out into the world, we should serve God with all of our hearts."

Despite presiding over 38 other graduations, Mason said he will still miss the graduates once they're gone.

"One of the things you miss is being able to see the students around campus on a daily basis," he said. "Once they leave, the times you get a chance to interact with them are much fewer and far between."