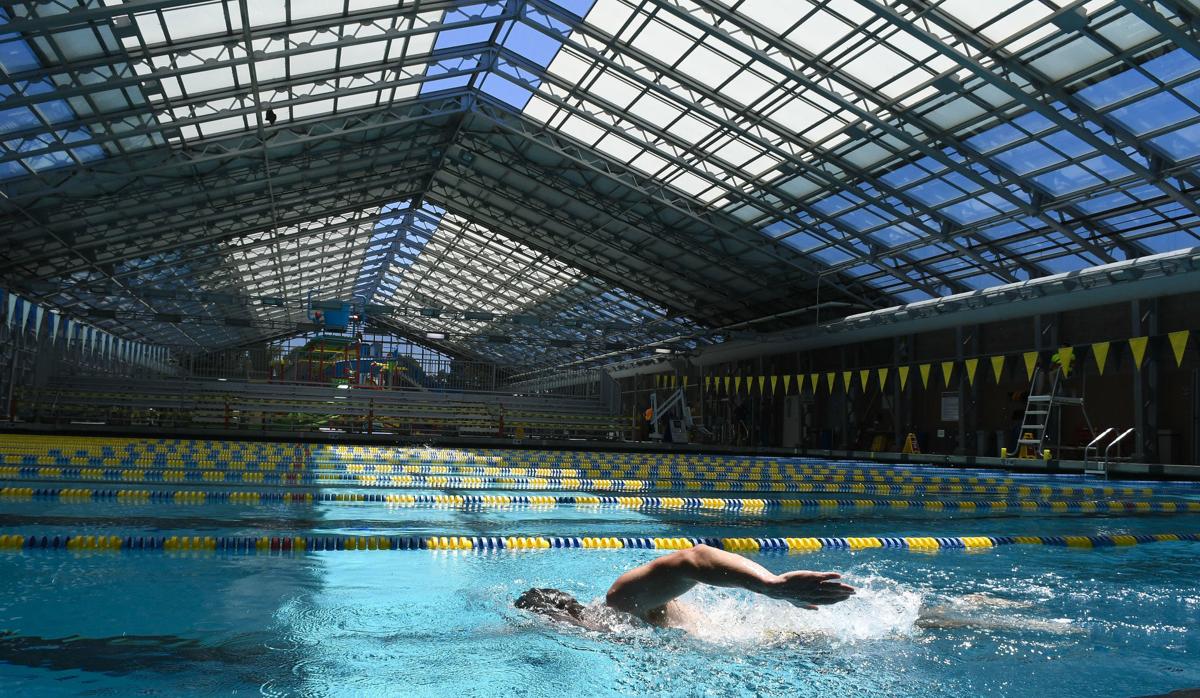 Swimmers do laps in one of the pools at the reopened Lompoc Aquatic Center on Monday. Some of the roof panels were retracted to open the facility to the air. 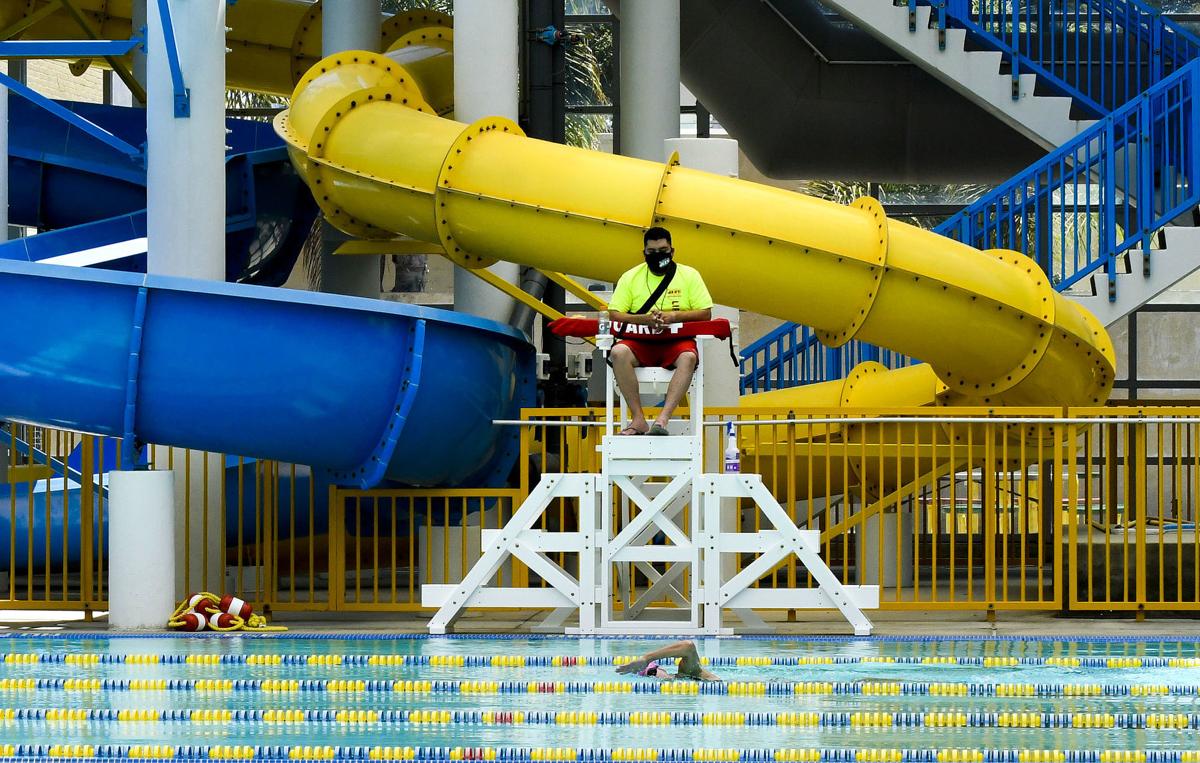 A lifeguard watches a swimmer do laps in the activity pool at the reopened Lompoc Aquatic Center on Monday. The slides and play features are still closed. 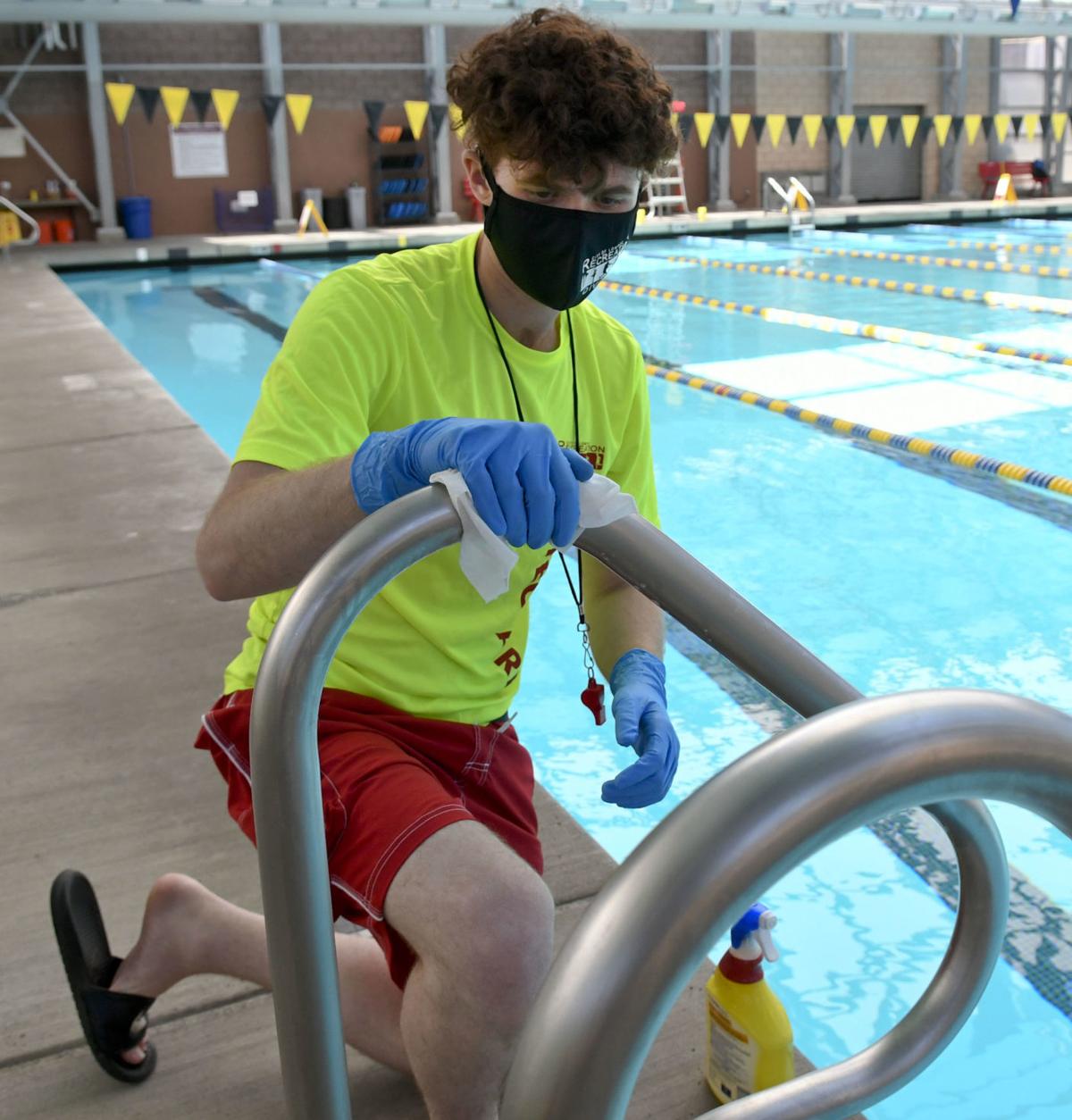 Lifeguard Caleb Criscione sanitizes a ladder at the lap pool in the reopened Lompoc Aquatic Center on Monday. 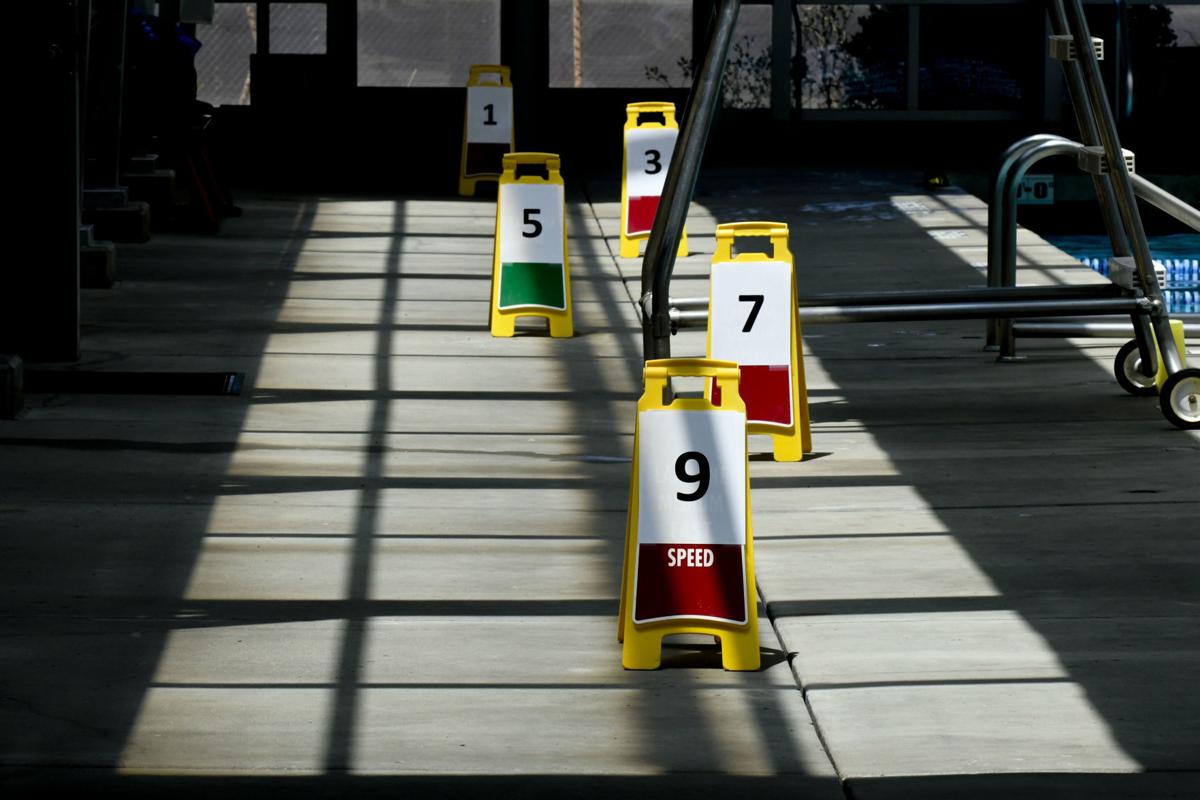 Every other lane is closed for the social distancing of lap swimmers at the reopened Lompoc Aquatic Center on Monday. 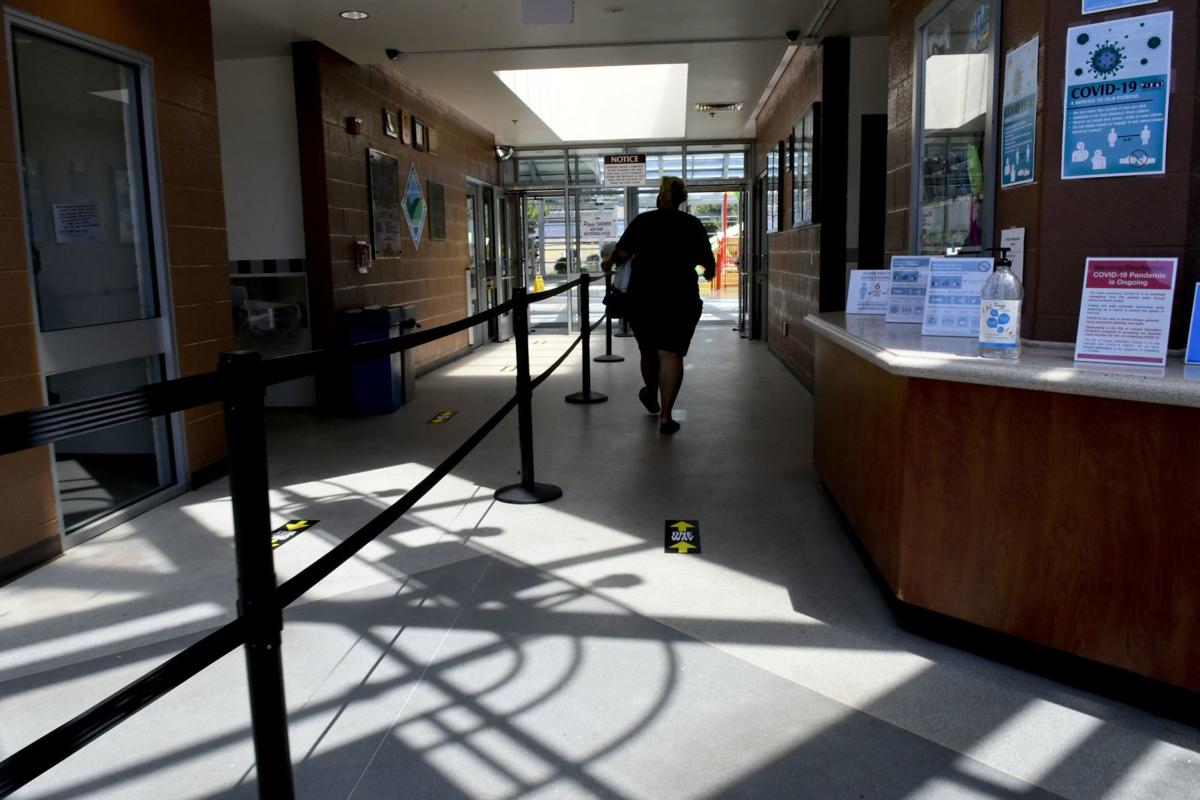 The hallway into the reopened Lompoc Aquatic Center is divided for one-way traffic on Monday. 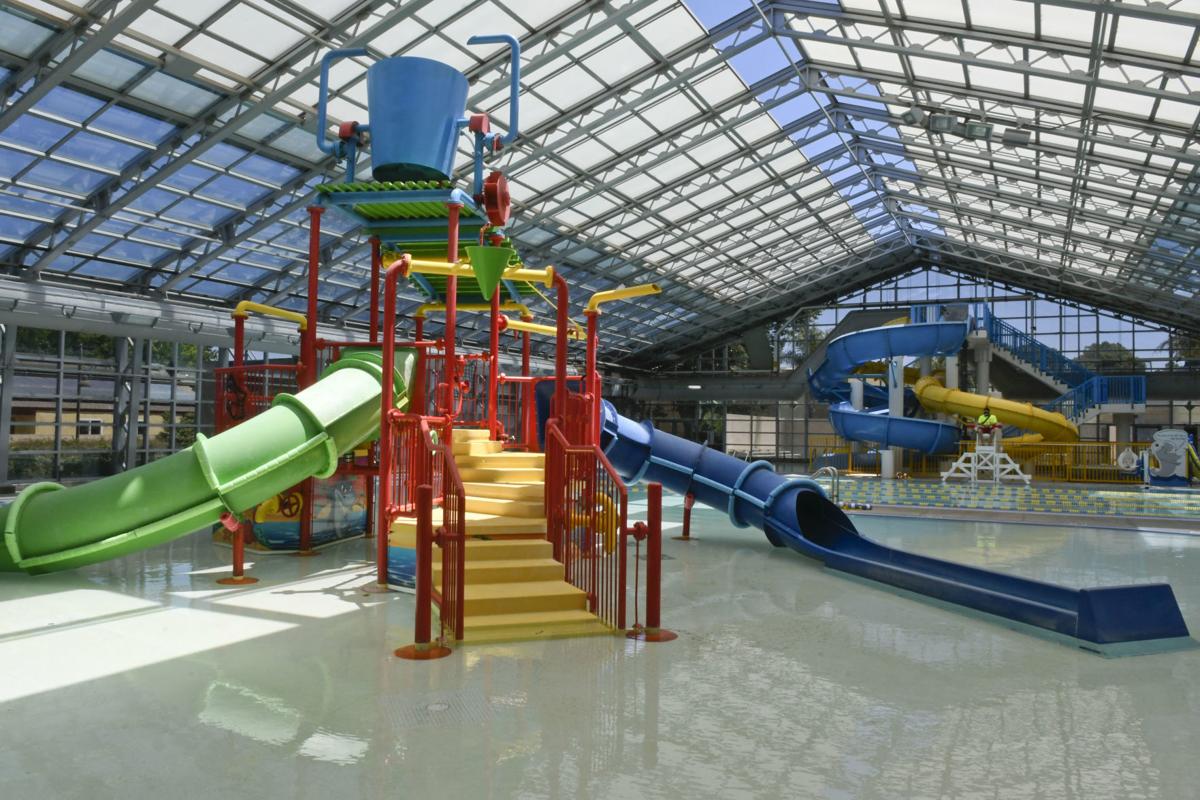 The Lompoc Aquatic Center reopened on Monday, but not the play features in the activity pool.

Swimmers were back in the water Monday at the Lompoc Aquatic Center, which reopened its doors to the public for the first time in four months.

Staff at the Aquatic Center, located at 207 W. College Ave., welcomed lap swimmers and began reintroducing some other programs on the first day of public access since the facility was closed on March 13 due to the COVID-19 outbreak. The reopening was limited, however, as several amenities remained shuttered and several more health and safety procedures were put in place for those looking to utilize the facility as summer heats up.

Still, Lompoc Aquatics Supervisor Mike Espino said he was excited to see the complex back in use. The number of swimmers allowed inside the pools at any one time for lap swim has been capped at 14 in an effort to promote social distancing. That maximum was reached Monday before 9 a.m.

“We’ve had a good wave of folks come in,” Espino said just before noon. “It actually went pretty smooth overall; no issues whatsoever.”

Although Gov. Gavin Newsom ordered the re-closure of many indoor establishments on Monday, Espino said the Lompoc Aquatic Center's retractable roof panels, which he plans to keep open during operating hours, should allow the facility to remain open.

The reopening of the Aquatic Center was a piece of a partial return to service for the Lompoc Recreation Division on Monday.

In addition to inviting back swimmers, the Recreation Division also resumed processing passports via an appointment system at the Anderson Recreation Center, 125 W. Walnut Ave. People looking to use that service are encouraged by the city to call 805-875-8100.

At the Aquatic Center, online reservations are required for lap swimming, which is currently available only to people 14 years or older. Reservations can be made for particular lanes for either 30 or 60 minutes at a time.

Time slots and lap lanes can only be reserved up to 48 hours in advance, and swimmers are limited to just one slot per day to ensure that more people have access.

Some of the other major changes in place at this time:

“We’ve really taken a lot of precautions,” Espino said. “It’s so we can make sure people are safe and can have an enjoyable experience while they’re here.”

Other programs reintroduced Monday include water exercise, swim lessons for those in levels 5 or above, and adult swim lessons.

Some amenities at the Aquatic Center aren’t expected back until 2021 at the soonest, according to city officials. Those activities include open recreation swim, lower-level swim classes, day camps, rentals for parties or gatherings, water slides and the kids’ Aquaplay area.

Espino noted that Aquatic Center staff is developing a plan to potentially offer private swim lessons for those in lower levels, which typically involve young children.

Espino said those private lessons will likely not allow for physical contact between the instructor and student, so they will require a parent or guardian to enter the pool with their child and then work closely with that child as the teacher provides instruction.

To make a reservation, or for more information about the new safety guidelines, visit the city’s Recreation Division website at https://www.cityoflompoc.com/government/departments/recreation.

Espino, who took over management of the Lompoc Aquatic Center in April 2019, pointed out that all plans at this time are tentative.

“We just don’t know with the current spike [in coronavirus cases] that’s going on right now,” he said, noting that the Aquatic Center could potentially close down again. “But I’m glad that we’re able to reopen. We take everybody’s safety — both people coming in, as well as employees — we really take that to heart.”

Espino — who has managed aquatic facilities since 1988, including 16 years with the American Red Cross and another 10 years as a safety and risk specialist for aquatics at the national YMCA headquarters — said he considers Lompoc to be “truly blessed” to have a facility of such quality.

His main goal now is to keep it that way, as safely as possible.

“I was actually telling my staff the other day as we were doing training to reopen, that in all my years in aquatics, I’ve never experienced anything like this,” he said, referring to the unprecedented coronavirus crisis. “It is something different and new, and, of course, some of the procedures that we’ve [put in place] we’ll have to look at and see if they’re actually working and then adapt. But yeah, this is definitely something that none of us have experienced.”

The Lompoc City Council on Tuesday night approved an agreement with the Lompoc Police Officers’ Association that will result in all sworn and non-sworn officers receiving a 2% salary increase. Additionally, City Manager Jim Throop used Tuesday night’s meeting to provide an update on city facilities and programs that were closed or stopped due to the COVID-19 pandemic.

The annual event, which is typically held around Mothers Day in May, had been rescheduled this year to take place July 24 and 25. With the coronavirus crisis still ongoing, city leaders made the call to cancel this year's luau altogether.

More than two dozen Lompoc residents, many with signs expressing displeasure with fireworks, rallied outside City Hall ahead of Tuesday night’s meeting of the City Council. Once the meeting began, most of them filed inside to voice their concerns and call on the governing body to ramp up enforcement of fireworks violations and to reintroduce a complete ban on all fireworks in the city.

Nellie Sewall, a co-owner of Alfie's Fish & Chips in Lompoc, was recently diagnosed with Stage 3 Non-Hodgkin’s lymphoma. As she continues treatments and tries to maintain a positive outlook, her family has set up a GoFundMe page in an effort to reduce her financial stress.

Public safety officials were kept busy in Lompoc during a festive — and very loud — Fourth of July weekend, as the city reported fielding more than 100 calls related to fireworks and also sent crews to multiple vehicle crashes and nine dumpster fires.

About 20 volunteers, who also received support from the Lompoc Parks Division, began repainting much of the skate park in bright new colors Tuesday evening, with an eye on completing the renovation by Wednesday evening. The community-wide effort was started after someone tagged the park this month with obscene graffiti.

Swimmers do laps in one of the pools at the reopened Lompoc Aquatic Center on Monday. Some of the roof panels were retracted to open the facility to the air.

A lifeguard watches a swimmer do laps in the activity pool at the reopened Lompoc Aquatic Center on Monday. The slides and play features are still closed.

Lifeguard Caleb Criscione sanitizes a ladder at the lap pool in the reopened Lompoc Aquatic Center on Monday.

Every other lane is closed for the social distancing of lap swimmers at the reopened Lompoc Aquatic Center on Monday.

The hallway into the reopened Lompoc Aquatic Center is divided for one-way traffic on Monday.

The Lompoc Aquatic Center reopened on Monday, but not the play features in the activity pool. 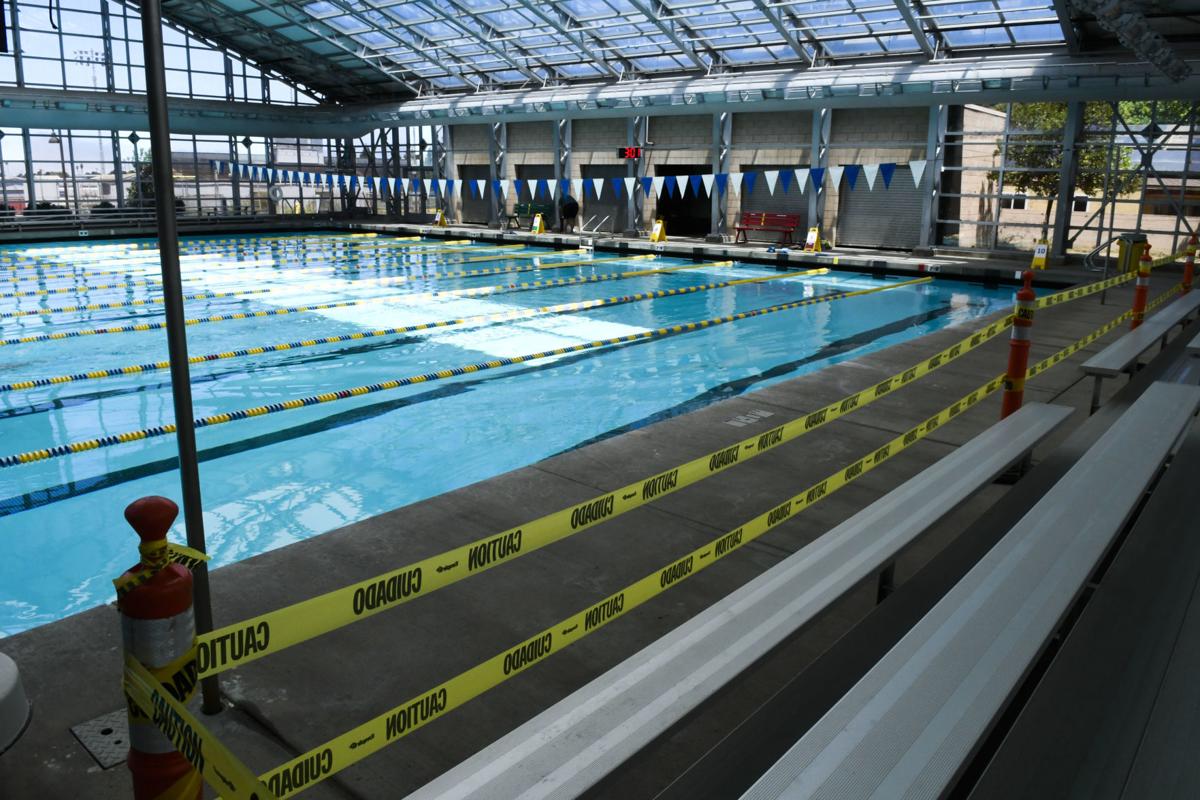 The stands are off-limits at the reopened Lompoc Aquatic Center on Monday.