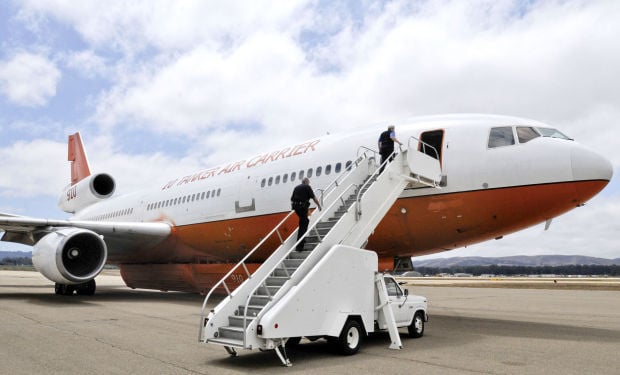 A DC-10, one of the nation’s largest firefighting tankers, has been refueling at the Santa Maria Public Airport to help battle the 11,000 Aspen Fire burning northeast of Fresno. 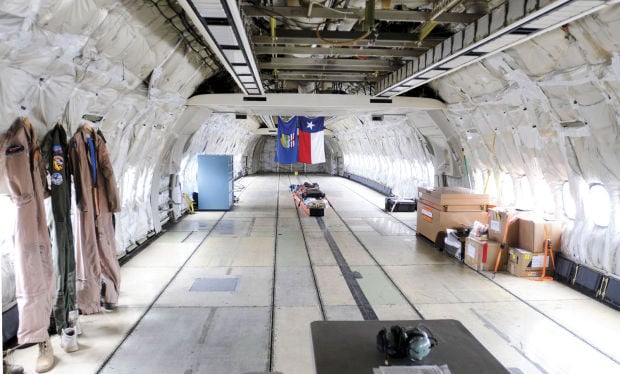 Most of the interior of the former passenger airliner has been removed to add fire retardant capacity to the DC-10 firefighting tanker. 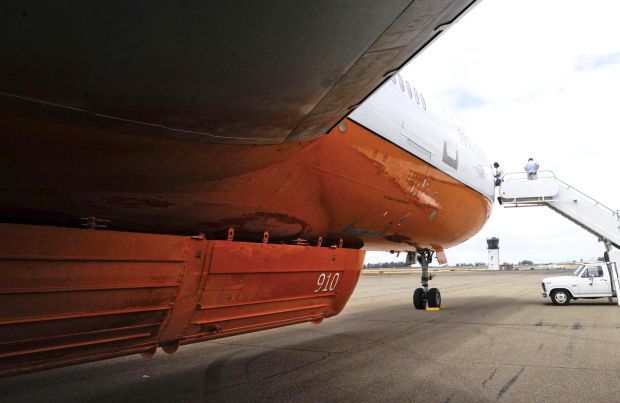 A tank to hold fire retardant hangs under a DC-10, one of the nation’s largest firefighting tankers that has been flying from the Santa Maria Public Airport to the Aspen Fire northeast of Fresno.

One of the nation’s largest aerial firefighting tankers has been flying out of Santa Maria Public Airport the last two days to battle a wildfire burning in the Sierra National Forest northeast of Fresno.

The McDonnell Douglas DC-10 made its second flight from Santa Maria to the Aspen Fire on Monday afternoon.

The tanker landed in Santa Maria over the weekend after making its first run to the fire from San Bernardino.

Tanker 910 is one of two DC-10 firefighting aircraft operated by 10 Tanker Air Carrier, based in Victorville.

Montelli said the three-engine plane was originally used by an airline, then was purchased by 10 Tanker parent company Omni Air International.

Omni used the 380-passenger fan-jet on charter flights, delivering U.S. troops to destinations in the Pacific and Europe, before converting it into an aerial firefighting platform in 2004.

Its first firefighting mission was on California’s Sawtooth Fire in 2006, said Tyler Coretz, one of two ground-based mechanics who travel with the tanker.

Since then, the plane has made dozens of fire drops for the U.S. Forest Service and Cal Fire.

Early Monday afternoon, Montelli had time to show a couple of visitors around the aircraft, which has been stripped of all its seats and even interior paneling to reduce weight.

“We’re certified to fly at 460,000 pounds gross weight, so we’re well below its flight capabilities,” Montelli said. “The capabilities of this airplane are unbelievable.”

Approaching a wildfire, the Tanker 910 crew will contact the airtac plane that’s coordinating the aerial attack, then will be directed to fall in behind a lead plane.

Reducing speed to 145 to 150 knots, about 165 to 170 mph, and coming in 200 to 300 feet above the ground, the tanker crew will watch for the lead plane to emit smoke showing the starting and stopping points for the drop.

“Once we see that smoke start to go under (the tanker), we’ll order ‘drop,’” Montelli said.

The engineer will then hit the red “drop” button, and the computerized system will do the rest — delivering the retardant at the programmed rate.

“You want it to fall like a hard rain,” Montelli explained.

He said the retardant can be delivered in multiple short bursts or one long release, emptying the belly tanks in 6 to 15 seconds.

After the return flight to base, the tanker can be reloaded and back in the air in 15 to 20 minutes.

Montelli said the DC-10 is ideal for aerial firefighting because of its aerodynamic qualities and avionics.

“The airplane is perfect,” he said. “It has just enough electronics and new age stuff to get us where we want to go, but it’s still old stick-and-rudder flying.”

Finished with the tour, Montelli was walking across the tarmac when a ground crewman gave him the word.

“We’ve got our orders to fly,” he said, hustling away. “Now the fun begins.”

A Santa Maria man has died and two more people were injured in separate motorcycle collisions in the Santa Maria Valley on Thursday, according to officials.

Anyone with information about the killing of three trees in Santa Maria is asked to contact the Santa Maria Recreation and Parks Department.

A DC-10, one of the nation’s largest firefighting tankers, has been refueling at the Santa Maria Public Airport to help battle the 11,000 Aspen Fire burning northeast of Fresno.

Most of the interior of the former passenger airliner has been removed to add fire retardant capacity to the DC-10 firefighting tanker.

A tank to hold fire retardant hangs under a DC-10, one of the nation’s largest firefighting tankers that has been flying from the Santa Maria Public Airport to the Aspen Fire northeast of Fresno.