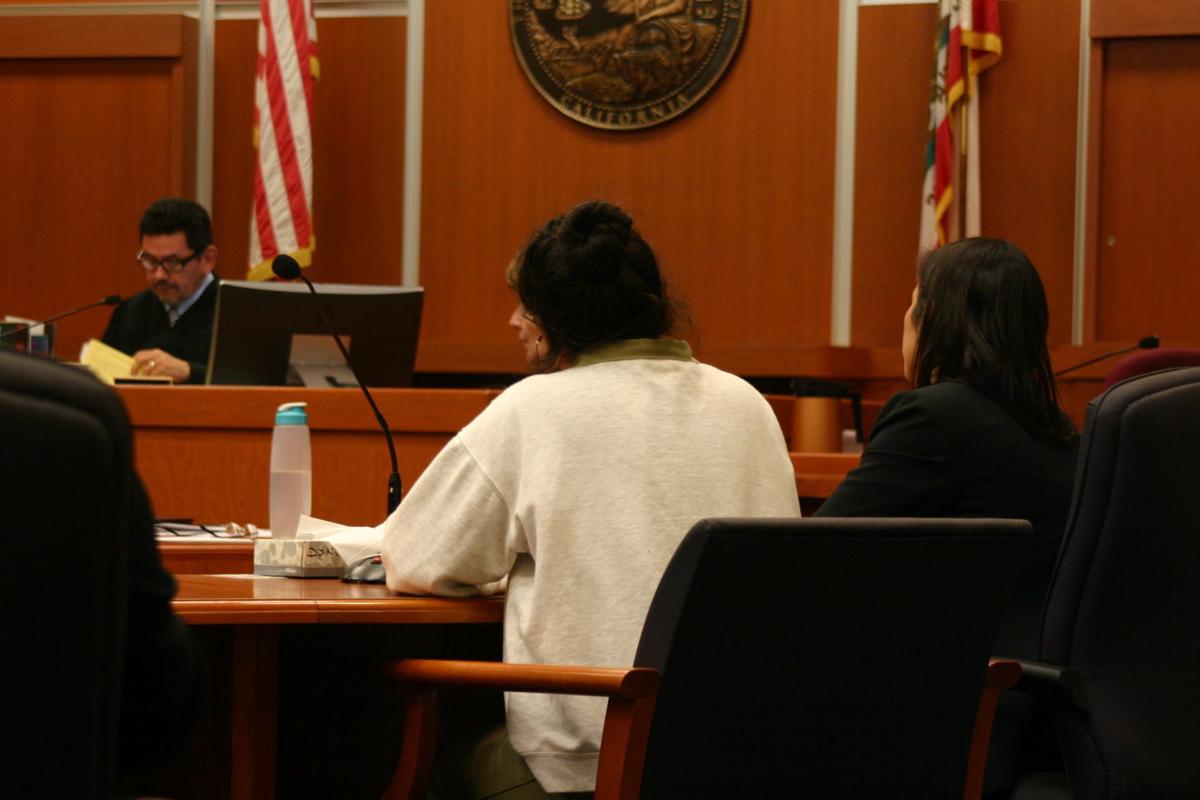 Maribel S., 16, seated next to her attorney Lea Villegas, listens to Judge Arthur Garcia during her sentencing Thursday, almost exactly one year after she was arrested for the murder of her newborn baby Anthony. 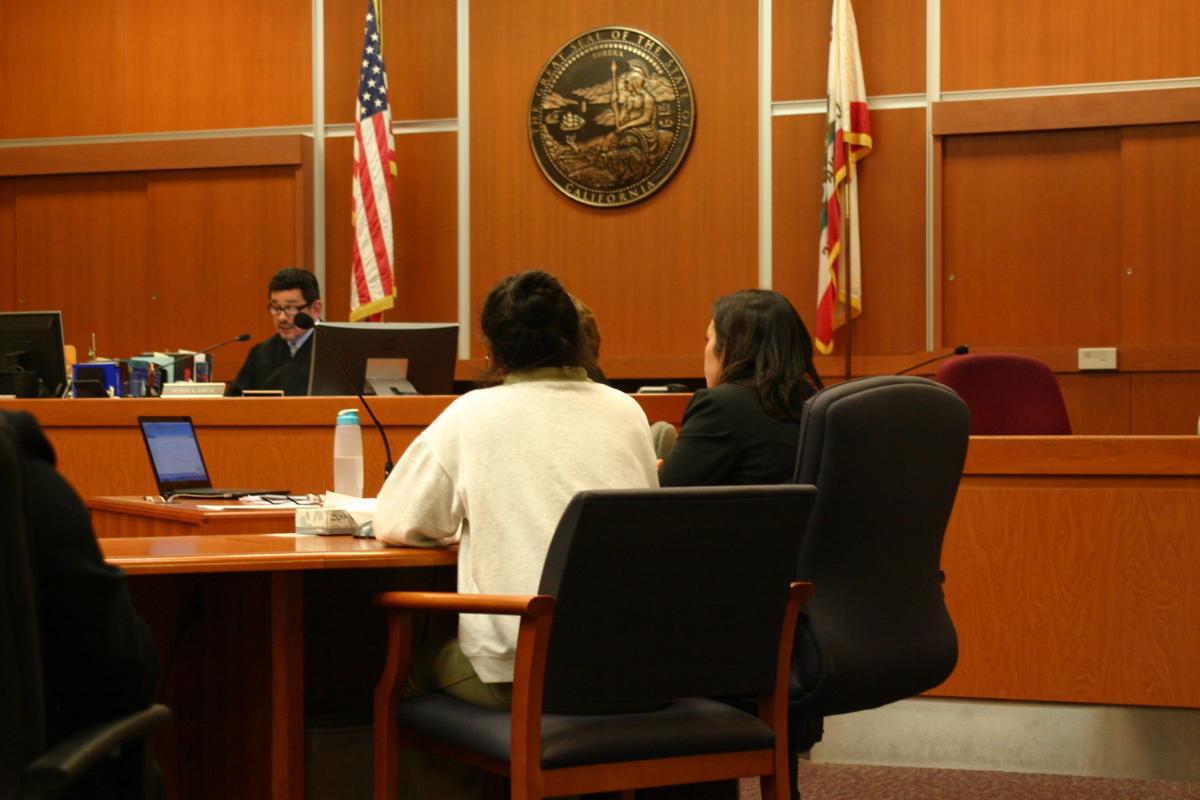 Maribel S., 16, who was convicted of the second-degree murder of her newborn baby last year, was sentenced to a group home facility Thursday by Judge Arthur Garcia at the Santa Maria Juvenile Court.

A teen mom convicted of murdering her newborn baby was sentenced Thursday to spend an indefinite period of time at a group home, rather than the recommended seven years at the Department of Juvenile Facilities.

The group home will be a lockdown facility, where 16-year-old Maribel S. will receive mental health treatment for as long as the court deems it necessary.

The ruling came Thursday afternoon at the Santa Maria Juvenile Court, after Judge Arthur Garcia spent nearly an entire day mulling over both the prosecution's and the defense's arguments over what would be the appropriate place to send Maribel.

Maribel was found guilty of second-degree murder of her newborn baby, Anthony, after giving birth in her home bathroom Jan. 17, 2016. At the end of the three-week trial, Garcia said while he was convinced that prosecutor Jennifer Karapetian proved that Maribel intended to kill her baby, he was not convinced Maribel did so after deliberating the consequences of her actions. Throughout the trial it was revealed the teen suffered from depression, post-traumatic stress disorder, was sexually abused as a child and frequently self-harmed.

"I recognize that this has been a very emotional case for all counsel, parties involved, including the police officers," Garcia said. "The death of baby Anthony has affected many people. The death of any child is tragic."

Garcia shared a personal story of his own, and reminisced about his grandfather, who lost his daughter shortly after losing his wife.

"I'll never forget what he said to me, that he was heartbroken when his wife died. He was married 50 years," he said.

"But he was absolutely devastated when his child died because it's not supposed to be that way. Children are supposed to live beyond us."

Garcia also reminded the court that "this is not an adult case."

"The law recognizes that children are not the same as adults. Juveniles are treated differently in many respects, and that's the way it should be. Juveniles are not adults; they are works in progress."

He said that although he considered probation's recommendations, which detailed the services available at the Department of Juvenile Facilities that would meet Maribel's mental health needs, he also questioned the appropriateness of her placement there.

"We're not looking at vindictiveness or retribution," he said. "I sent many children, unfortunately, to the [Department of Juvenile Facilities] over the years, and I always felt it was a failure to do so. And, the system collectively failed if the child had to go to the DJF."

The youth sent to such facilities were typically gang-entrenched and had multiple violent offenses that increased with severity over time, Garcia said.

While Garcia acknowledged that Maribel did not fit that profile, he did not downplay the seriousness of her offense.

"Maribel murdered her baby. She will suffer the consequences of her actions. She is a young child with a long life ahead of her. She's already been subjected to being called a baby killer and was attacked in the hall," he said.

"[However,] the greatest pain she may suffer may be all internal, and not from what other people say."

As defense attorney Lea Villegas requested Wednesday, Maribel will be made ward of the court and be placed at a level 14 group home. Once the probation office finds her an appropriate home, she will come back to court in six months to review her progress and, again, in a year.

Garcia also reminded Maribel that the Department of Juvenile Facilities is "not off the table" if she violates her probation.

"Being placed on probation isn't a joke; it's very serious," he told her. "I believe you'll do well, but it's not up to me, it's up to you."

After court, Villegas voiced her appreciation for the judge's consideration of her client's conditions and his reminder that rehabilitation is emphasized in juvenile delinquency law.

"I think that our community in general benefits from a young woman rehabilitated as opposed to hardened and institutionalized," she added. "That's essentially what juvenile law is premised on and that's what the judge recognized."

Attorney to contest sentencing for teen mom in infanticide case

A Santa Maria teenager was found guilty of second-degree murder by Judge Arthur Garcia in Santa Maria Juvenile Court on Friday. She was found …

Attorneys who have been arguing the case involving a 15-year-old Santa Maria teen who allegedly murdered her baby Jan. 17 questioned whether o…

A University of San Francisco law professor who specializes in psychology, sociology and criminology raised several red flags Friday over the …

Testimony during the second day of trial for a teenage girl charged with murder in the death of her newborn, focused on blood evidence found i…

"You have two choices: You're either a baby-killing monster, or you made an honest mistake, but if you don't be honest with me, I can't help y…

Teen charged with murder of newborn pleads not guilty

Maribel S., 16, seated next to her attorney Lea Villegas, listens to Judge Arthur Garcia during her sentencing Thursday, almost exactly one year after she was arrested for the murder of her newborn baby Anthony.

Maribel S., 16, who was convicted of the second-degree murder of her newborn baby last year, was sentenced to a group home facility Thursday by Judge Arthur Garcia at the Santa Maria Juvenile Court.