The same courtroom that was used for the 2005 Michael Jackson trial will house the Operation Matador trial, but even the massive crowds that followed the King of Pop didn't warrant the physical alterations to the space that will take place between now and the trial's start date in February.

The group of 10 are among 17 arrested during Operation Matador in March 2016. Each of the 10 is facing a multitude of gang-related charges, including murder. Others who were arrested by the Santa Maria Police have either pleaded out or are charged with lesser crimes and will be tried separately.

At the same hearing on Oct. 18 that McGregor chose the trial's courtroom, he denied requests for some defendants to be tried separately, meaning the group of 10 will be tried together in the same courtroom. 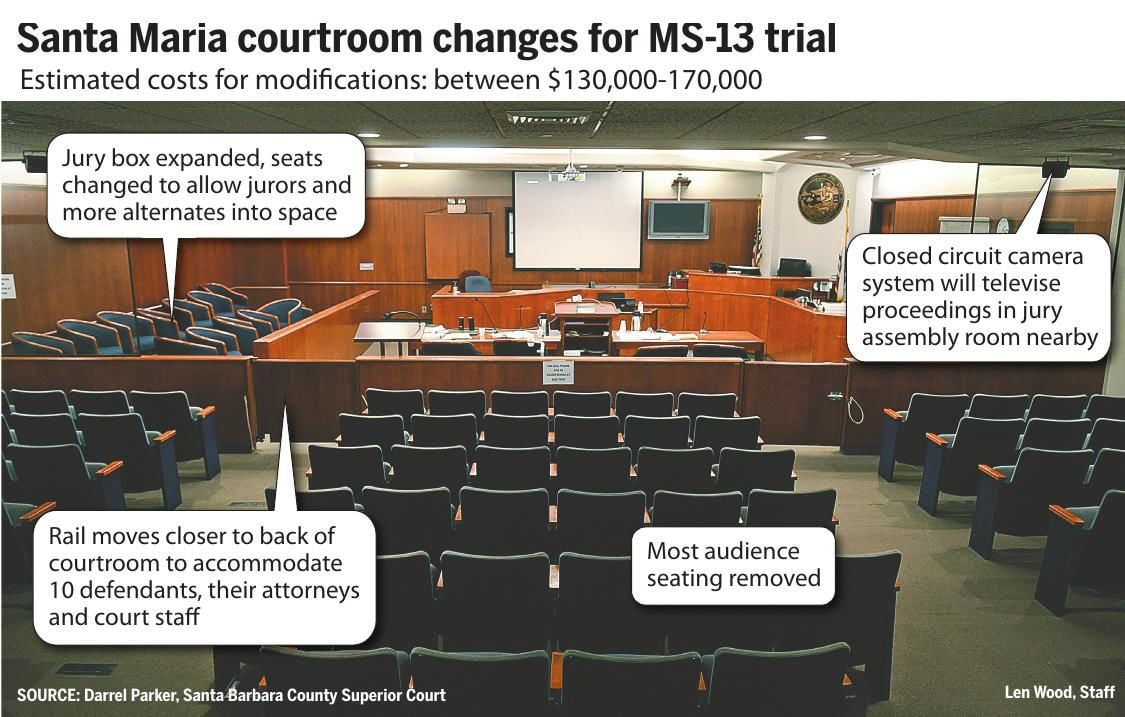 The number of defendants and the amount of evidence that will be produced for each of their charges (at least four dozen charges each), sets the stage for the lengthy trial inside a courtroom that will need to be physically modified to accommodate the defendants, dozens of attorneys, and the public.

The case is drawing comparisons to the U-Haul murder trial in 2015 in which six murder defendants were tried in Santa Maria Juvenile Court on Foster Road, as well as the Jackson trial. Both trials lasted a little more than four months.

“It was the biggest courtroom we had and it still is,” Parker said of Department 8, adding that the courtroom has more than 100 seats. “We haven’t had to do this before.”

Parker said there will be three main conversions inside the courtroom and they include moving most of the gallery seating (or the public seating), expanding the jury box and increasing the number of council tables for the defense attorneys.

Public seating will be minimized, Parker said, adding that only two rows of seats will be available, including accommodations for news media.

An audio and video feed will broadcast to the lobby if there isn’t enough public seating to accommodate everyone in the courtroom, Parker said. Parker added that he doesn’t anticipate any modifications to the lobby.

Space for the defendants and their attorneys will be made along the far side of the courtroom, Parker said, and a barrier will be needed. Parker didn’t have specifics about the type of barrier that will be used, but said removing the seats will create space to separate the public and defendants.

In order to do that, the carpet surrounding the seats will first be removed. The seats are mounted to the floor with a series of metal posts protruding from the ground. The posts will be cut off because they’ll create a trip hazard, Parker said, adding that the seats will have to be reinstalled after the trial.

“I think expanding the jury box will take a little more construction and moving the railing that separates the public gallery will take some work,” Parker said.

The current jury box accommodates 14 — for a total of 12 jurors and two alternates. Modifying the jury box will involve putting in higher density seating and adding extra seating to accommodate at least 20 jurors.

Parker said he's reminded of how the Superior Court modified the jury box during the Jackson trial by using old movie theater seating. He said a furniture company quoted more than $10,000 to provide extra seats. Parker jokingly responded that he could get them cheaper on Ebay, and that's exactly what he did.

Parker found a Tennessee company on Ebay that sold used movie theater seats — complete with popcorn cup holders — for $45 each, purchased 20 of them for a total of $900 and had them delivered for an extra $300.

The court still has the seats, Parker said, but now they're contained within the jury box in courtroom seven in the same building.

Parker said he had to consult with design personnel from the California Judicial Council, which owns all of the courts in the state with the exception of the Anacapa Courthouse — which is owned by Santa Barbara County.

As for the cost, that isn't quite certain but Parker estimated that it could range anywhere between $130,000 and $170,000. He asked the Judicial Council to pay for it, but hasn't received a response to the request.

That's still not as much, however, as $1.7 million price tag for Santa Barbara County Sheriff's deputies to provide security for the courthouse during the Jackson trial.

The county and the court are separate legal entities, Parker said. The council didn’t pay anything for the Jackson trial, he added. Most costs were related to security, including a fence in the parking lot, which Parker said the county also paid for.

“If they don’t pay for it,” Parker said, “it will have to come out of the court’s budget.”

The court doesn’t plan on holding any other court cases in Department 8 during the duration of the Matador trial, Parker said, adding that he'll adjust plans if defendants settle their cases.

Investigations in to a rash of murders that occurred over a three year period in and around Santa Maria, led police to discover the internatio…

An Operation Matador MS-13 suspect argues that a courtroom modification will deprive him of a fair trial.