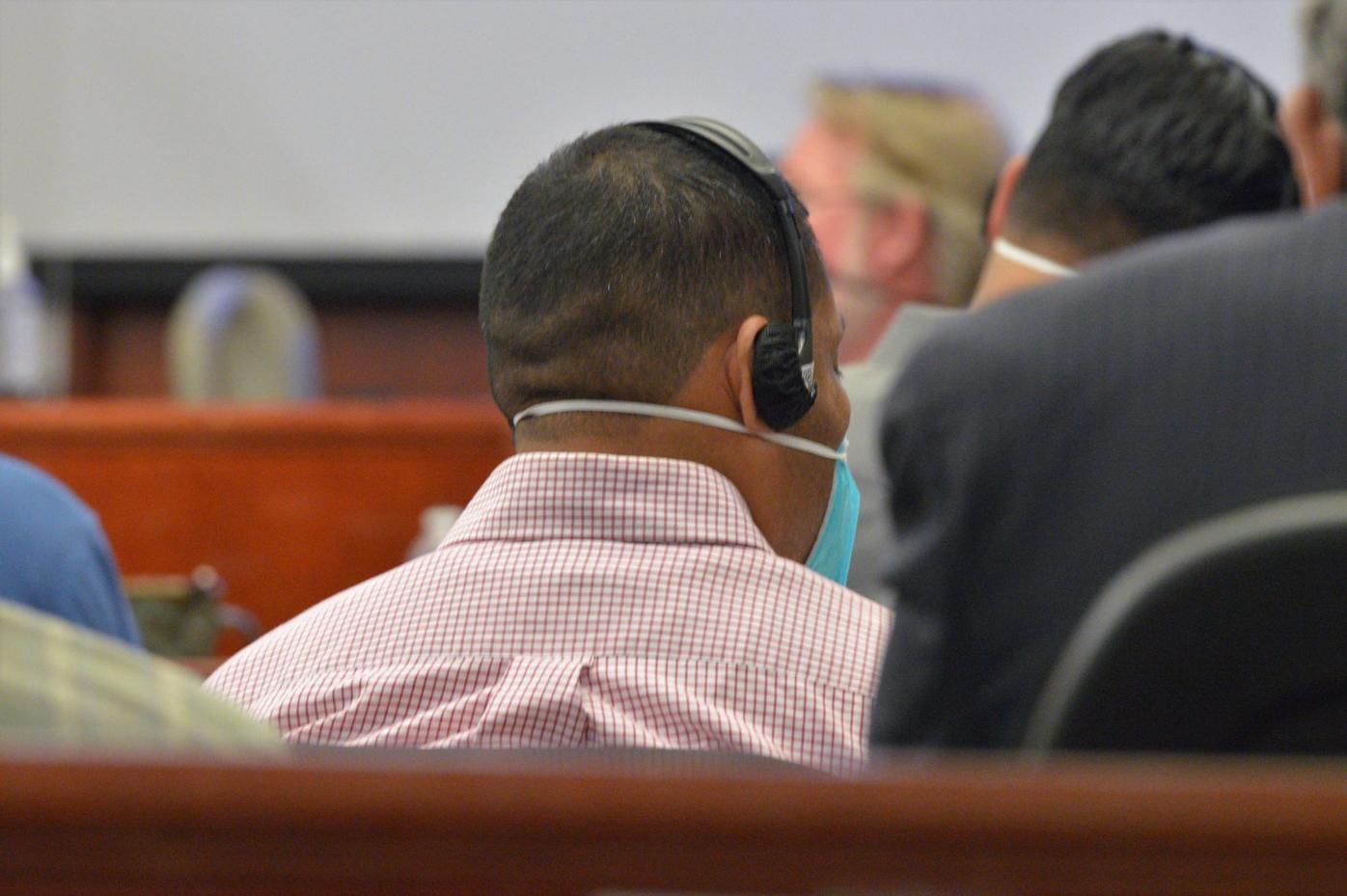 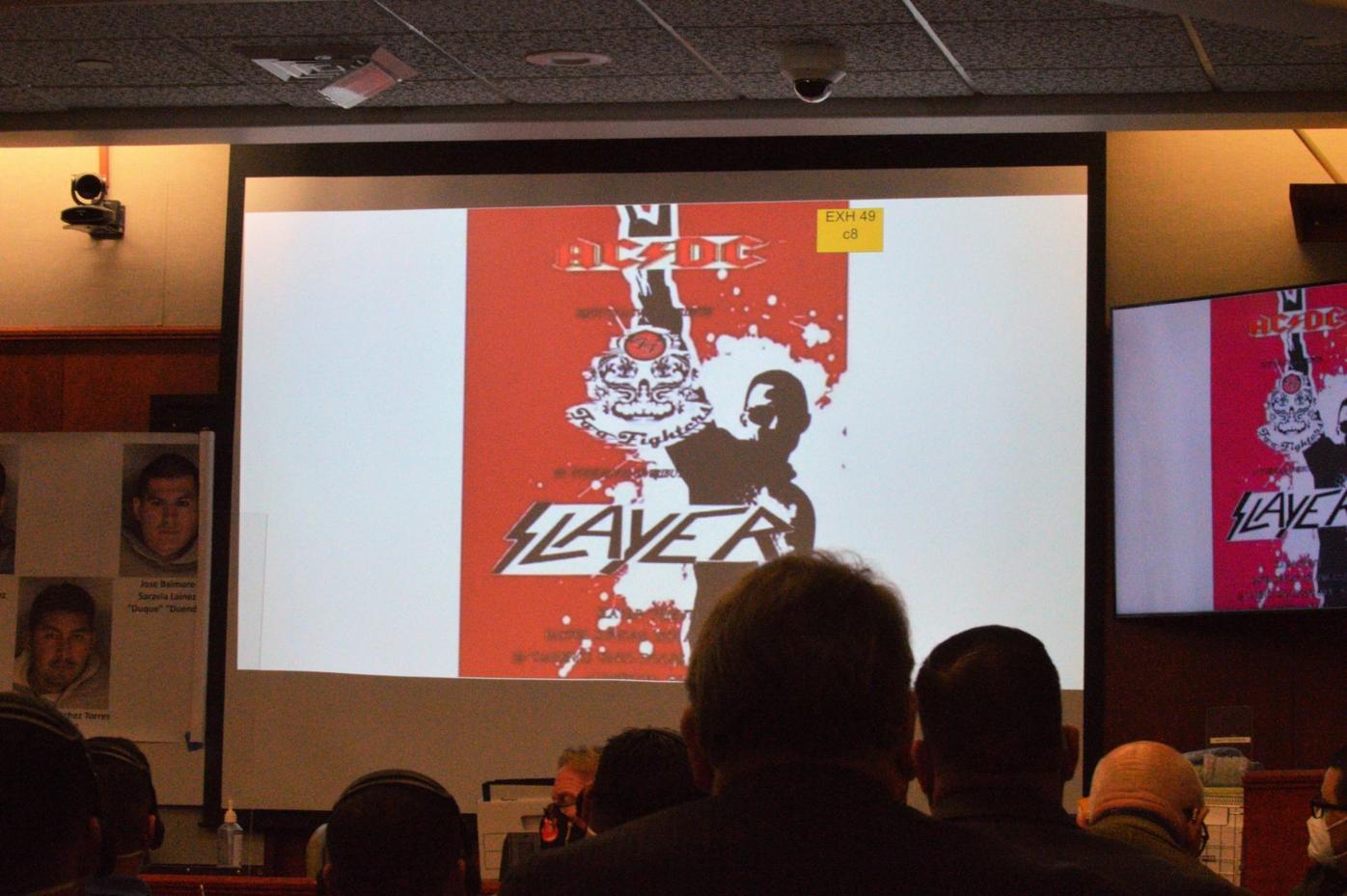 Prosecution presented what it said is a screenshot from a music video uploaded by one of the members of Santa Maria Little Salvy in court Monday.

A police detective testified Monday in the MS-13 gang murder trial, providing details about the five defendants and how they allegedly worked in tandem to kill 10 people on behalf of the violent international criminal organization as it expanded its territory into Santa Maria between 2013 and 2016.

Santa Maria Police Sgt. Scott Casey was called as a witness by Santa Barbara County Senior Deputy District Attorney Ann Bramsen and as a gang expert who gave testimony on his yearslong investigation into what he was said was the city’s local group, known as Santa Maria Little Salvy Locos Salvatruchos.

The five were arrested March 3, 2016 as part of Operation Matador, a gang sweep led by the Santa Maria Police Department into the MS-13-linked killings.

Defendants Olvin Serrano and Jose Juan Sanchez Torres, who were in trial group two, each pleaded guilty Nov. 19 to two counts of attempted murder in a plea deal with prosecutors and were sentenced to 24 years and eight months in prison, court records show.

The remaining eight defendants are each charged with multiple counts that include murder and gang conspiracy. Each have pleaded not guilty to the charges.

In his testimony, Casey said his investigation took him to places such as the Washington D.C. area, Fresno and Texas, meeting with American and El Salvadorian counterparts along the way and who provided him a window into what he described as a complicated network of cliques that stretched from California, to the East Coast and to Central America.

Casey described what was tantamount to a top-down hierarchy that led directly to inmates in El Salvadorian prisons, membership ranks, accounting ledgers and inner-politics. The structure started with a central committee called the "ranfla general" composed of inmates in four different prisons, moving down to the "ranfla in liberty" that's comprised of four "zones," with each zone roughly corresponding to a "program" that dominated a certain geographic area.

Santa Maria Little Salvy had allegiances to the East Coast program and split off from the San Joaquin program, which was a hodge-podge of non-Los Angeles cliques, according to Casey.

Casey said that Santa Maria's clique often had to "split the baby" when it came to allegiances and doling out taxes to members in El Salvadorian prisons and members of the Mexican Mafia in California prisons, to whom MS-13 members are beholden.

Despite the politics, all MS-13 members are aligned against their arch rivals, the 18th Street gang, or Barrio 18.

"The hatred between those [two] groups is pretty extreme," Casey said.

Bramsen showed what Casey said were communications between SMLS and MS-13 members in El Salvador showing how tax proceeds should be split, and what appeared to be screenshots from defendant Torres' Facebook profile depicting gang artwork, which was public.

The communications sometimes referred to members as "homies," or full-members; and "chequeos," who work their way to become "homies." A third rank, paros, must work to become a chequeo, according to testimony.

In a Dec. 14, 2015 text message exchange between Jose Bonilla-Mejia and Jose Ricardo Saravia Lainez, Bonilla-Mejia expressed an issue with Membreno becoming a member of the SMLS clique after only six months, according to testimony.

Bonilla-Mejia was convicted of federal murder-related charges in 2020 and sentenced to life in prison, according to court records.

The trial resumes Tuesday at 8:45 a.m. in Department 8 in Superior Court of Santa Maria.