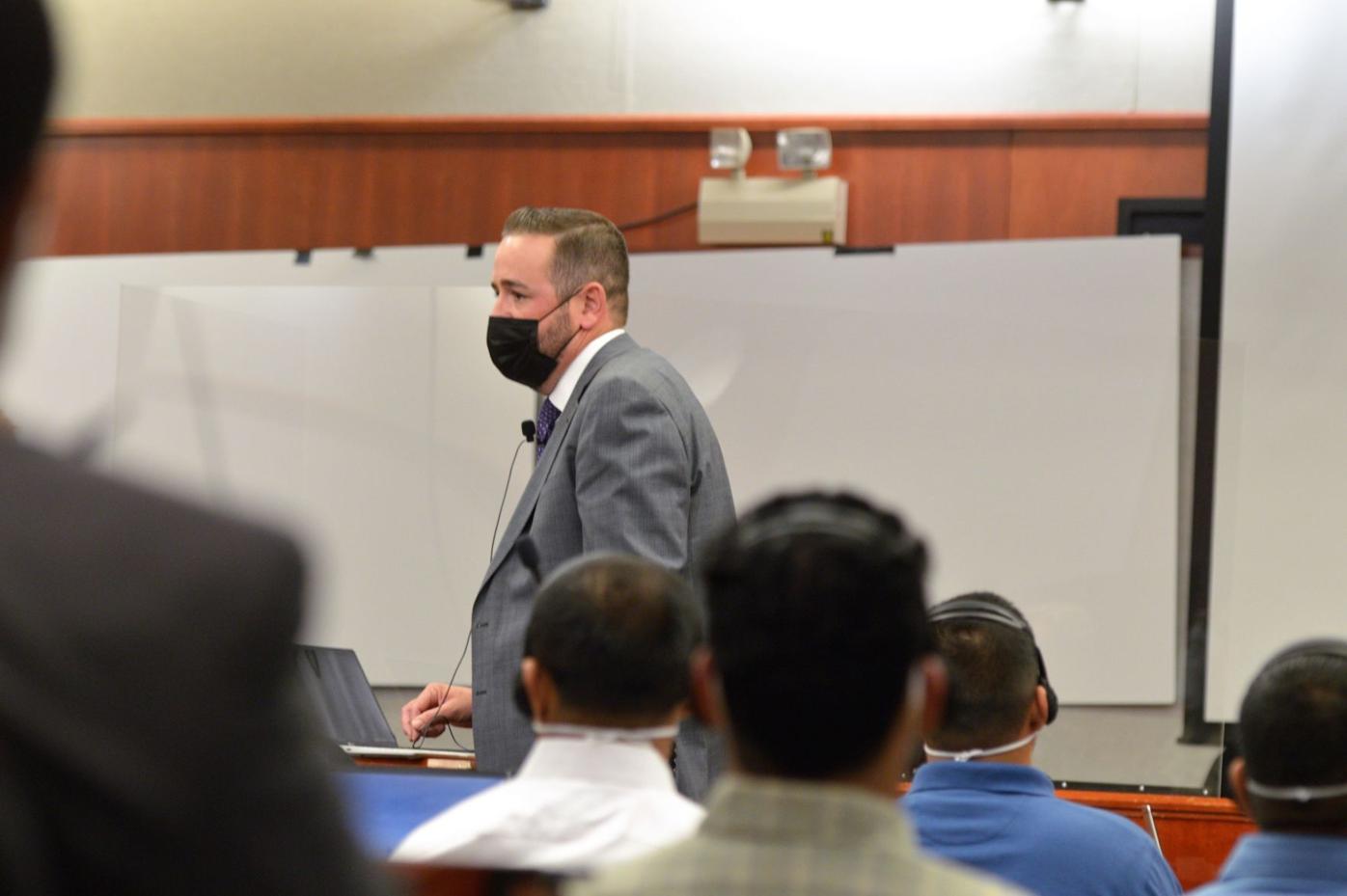 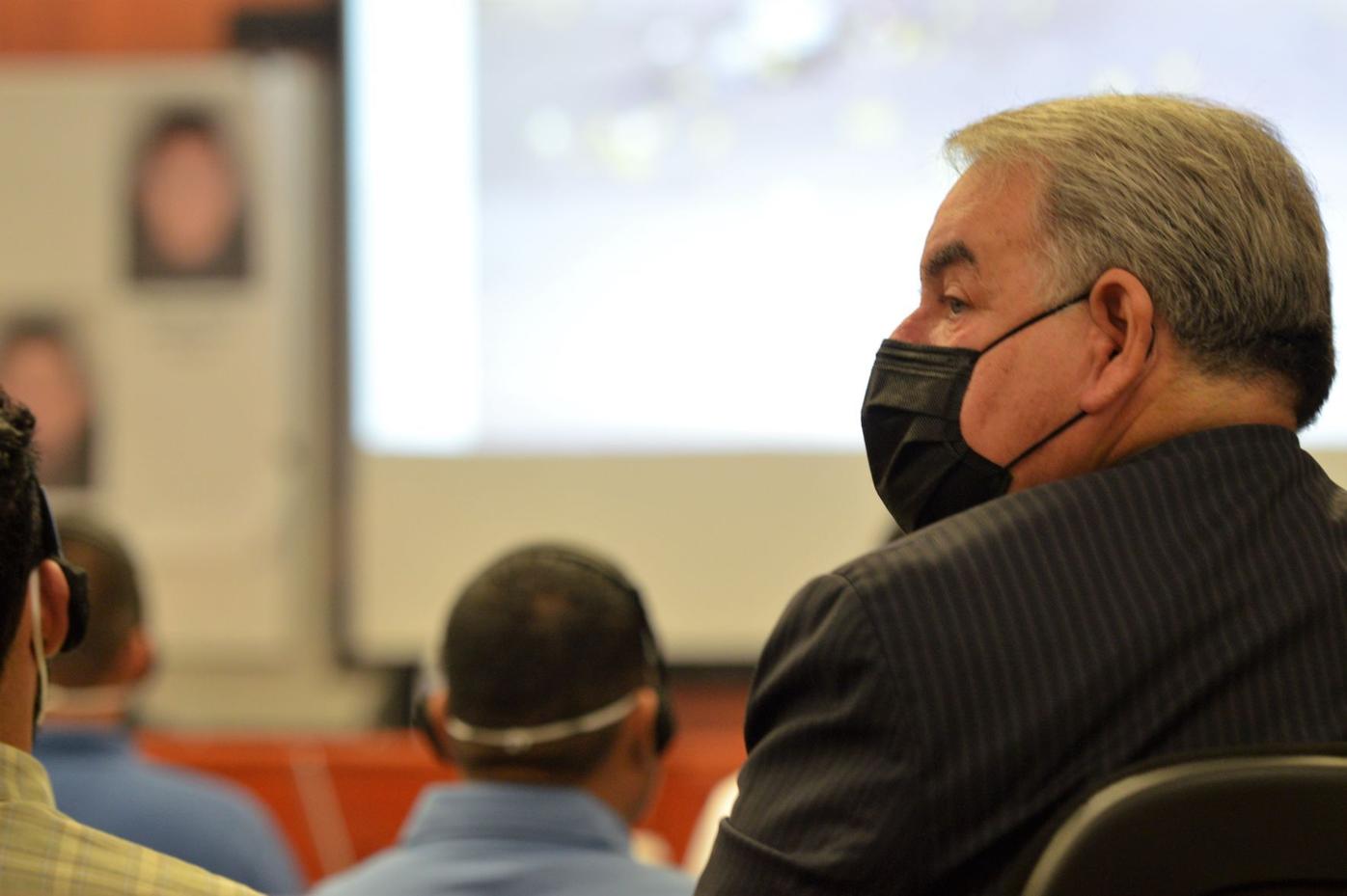 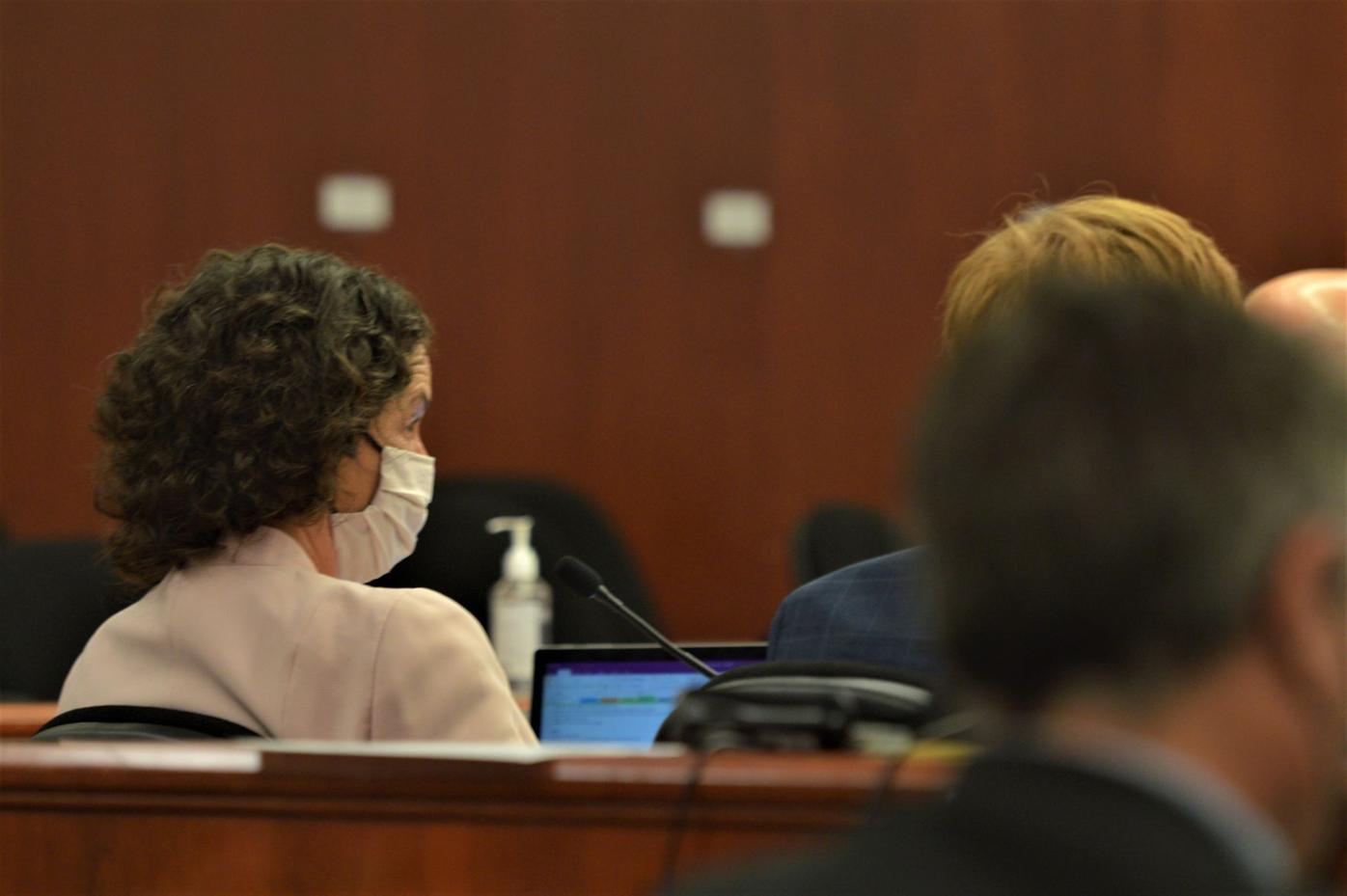 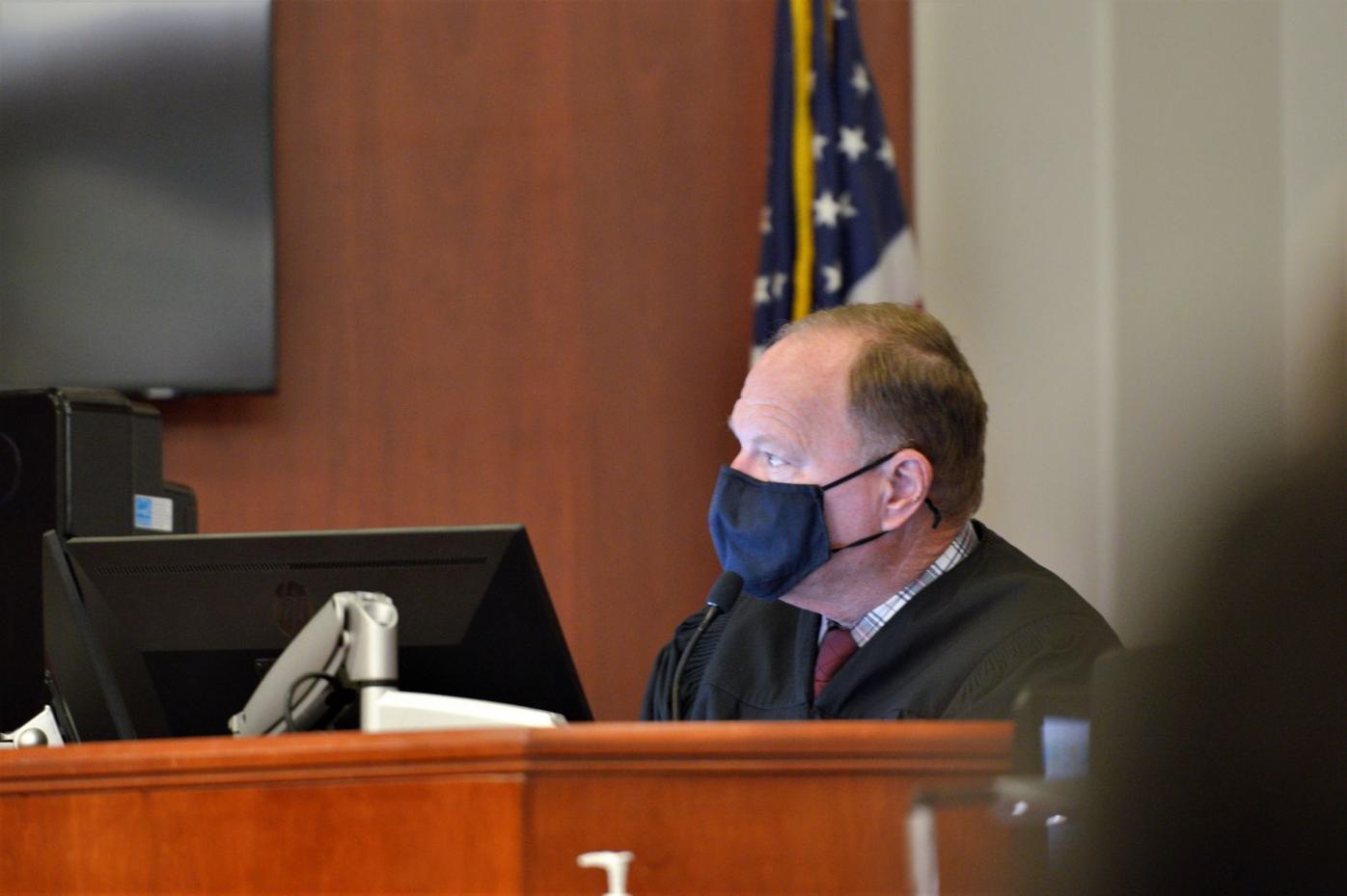 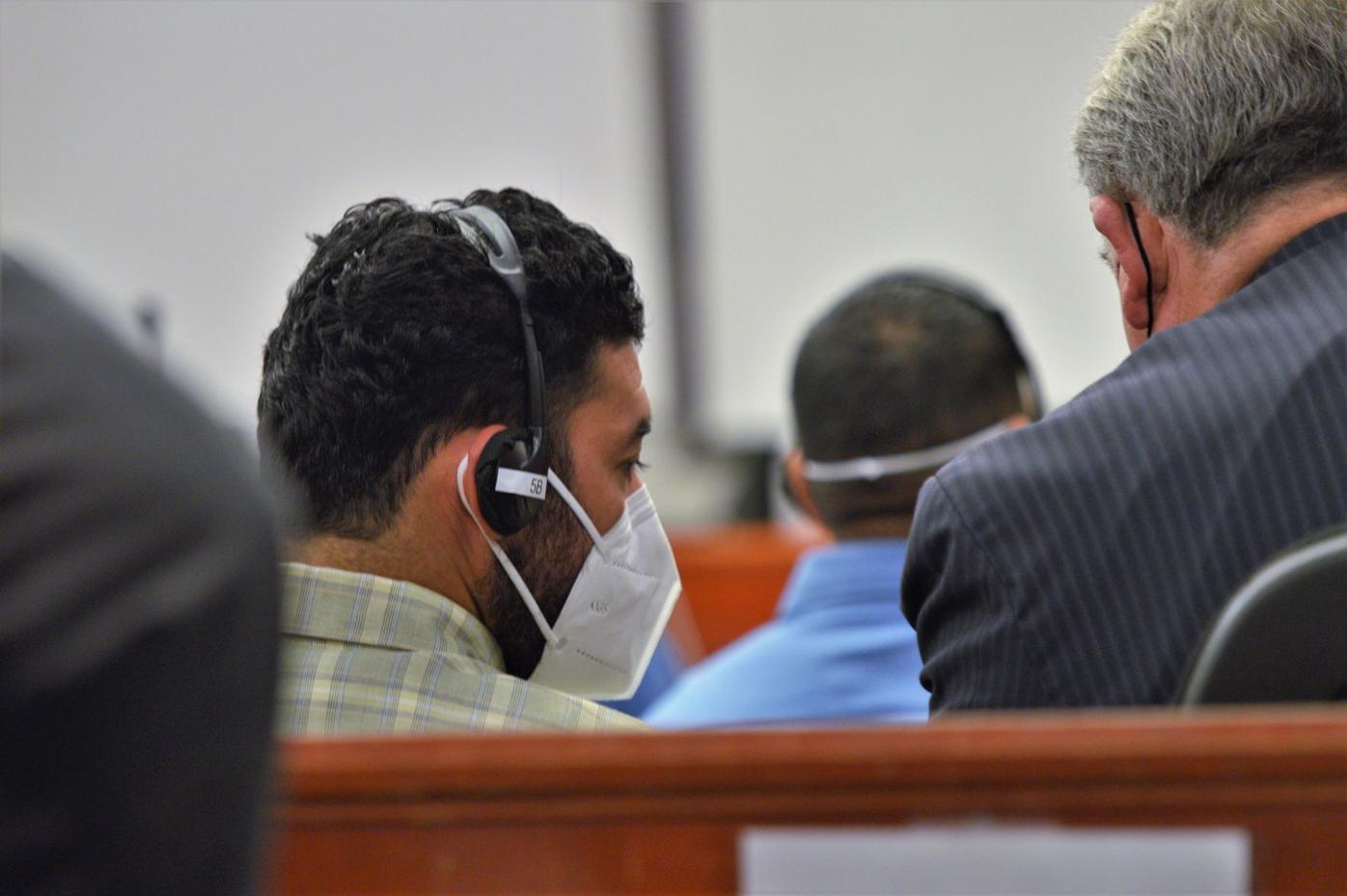 Opening arguments concluded Thursday in the MS-13 gang murder trial, with the prosecutor citing cell phone data and what she said was evidence of seven handguns used by the 10 defendants to kill 10 victims across the city from 2013 to 2016.

In her presentation before the Santa Maria jury, Santa Barbara County Senior Deputy District Attorney Ann Bramsen expanded on what she described as the circumstances surrounding the shootings and killings of the alleged victims, citing bursts of short phone calls between the defendants before and after the killings, and the handguns used by them.

Gun No. 5 — a 9-millimeter pistol whose make is not known because it hasn’t been located, but was identified through casings and bullets left at the crime scene – was allegedly used to kill 21-year-old Abrahan Rojas-Najera.

His 15-year-old brother, identified as Hugo N., was seriously injured in the shooting shortly after 7:30 p.m. on Oct. 30, 2015 near the intersection of West Cook and South Smith streets. Bramsen said Rojas-Najera was shot several times in the back and later died.

The 911 call from a nearby male resident, who found them front of the Jewish temple and attempted to render aid, was played in court.

Just before opening arguments commenced Wednesday in the MS-13 gang murder trial, members of the prosecution team tore down several white sheets of paper taped together to reveal a blown-up display with the mugshots of each of the 10 defendants at the front of the courtroom.

“You’re gonna be OK, bro, breathe! Breathe!” the caller can be heard saying to the victim, before addressing the dispatcher in a frantic jumble of words. A person screaming in pain can be heard in the background. “Multiple shots fired! Cook and Smith!”

But in their rebuttals, the five defense attorneys said not so fast, contending the cell tower data wasn't accurate enough to prove anything and only showed the defendants were at home, because they lived in the area.

Additionally, they said the prosecution lacks crucial evidence such as DNA, surveillance video, proof of gun ownership or anything other than vague descriptions of the suspects.

The 10 defendants were split in two Dec. 20, 2019 after Superior Court Judge John McGregor ruled a fair trial couldn’t proceed with all of the defendants, their attorneys and translators packed into one courtroom.

All are accused members of MS-13, described as a violent transnational criminal organization, and part of a local clique known as Santa Maria Little Salvy. They were arrested as part of a March 2016 sting known as Operation Matador and were given numerous murder and gang conspiracy charges connected to the 10 killings. Each defendant has pleaded not guilty to all charges.

Before concluding her statements Thursday, Bramsen elaborated on the circumstances of the shootings.

One of them included the killing of 17-year-old Oscar Joaquin, who Bramsen described as a member of Santa Maria’s Northwest gang — West Park’s rival. He was allegedly armed with a bat, while his two associates, identified as Kevin Ramnarine and an unidentified John Doe male, carried machetes.

They were attacked shortly after 10 p.m. on July 28, 2015 near the intersection of West Barrett Street and Western Avenue.

Joaquin was shot multiple times and sliced with a machete, before one of his assailants completely severed his left hand, which was located on a nearby sidewalk.

The Nov. 20, 2015 shooting in the 1500 block of South Thornburg that killed 17-year-old Ulises Garcia Mendez also injured two others, including 16-year-old Gerardo Gonzalez.

Bramsen played a recording of a conversation between Gonzalez and an interviewer on the ambulance ride to the hospital.

During the interview, Gonzalez can be heard in pain but gradually calms down as EMTs treat his wounds.

He told the interviewer they were walking home when three men walked up to them and said “what’s up” before each one pulled out a handgun.

The men, who looked like “normal guys,” began shooting, firing several bullets at Mendez, including one that struck his spinal cord, causing him to collapse and eventually die at the scene, according to Bramsen. Gonzalez was struck several times.

Attorney Chris Ames, who represents Luis German Mejia Orellana, who was charged with 41 separate counts, asked the jury members to “compartmentalize” circumstances and not let the “sheer volume” of charges influence their verdicts.

“The prosecution built their case around the association and the relationships Mr. Orellana has with the [other defendants],” Ames said, adding the prosecution’s cell phone data analysis is flawed, because it can be affected by variables such as weather, number of the towers and volume of calls in a geographical area. “I’m going to show you just how just how unreliable cell [data] is.”

The trial resumes on Nov. 29 in Department 8 of Superior Court in Santa Maria.