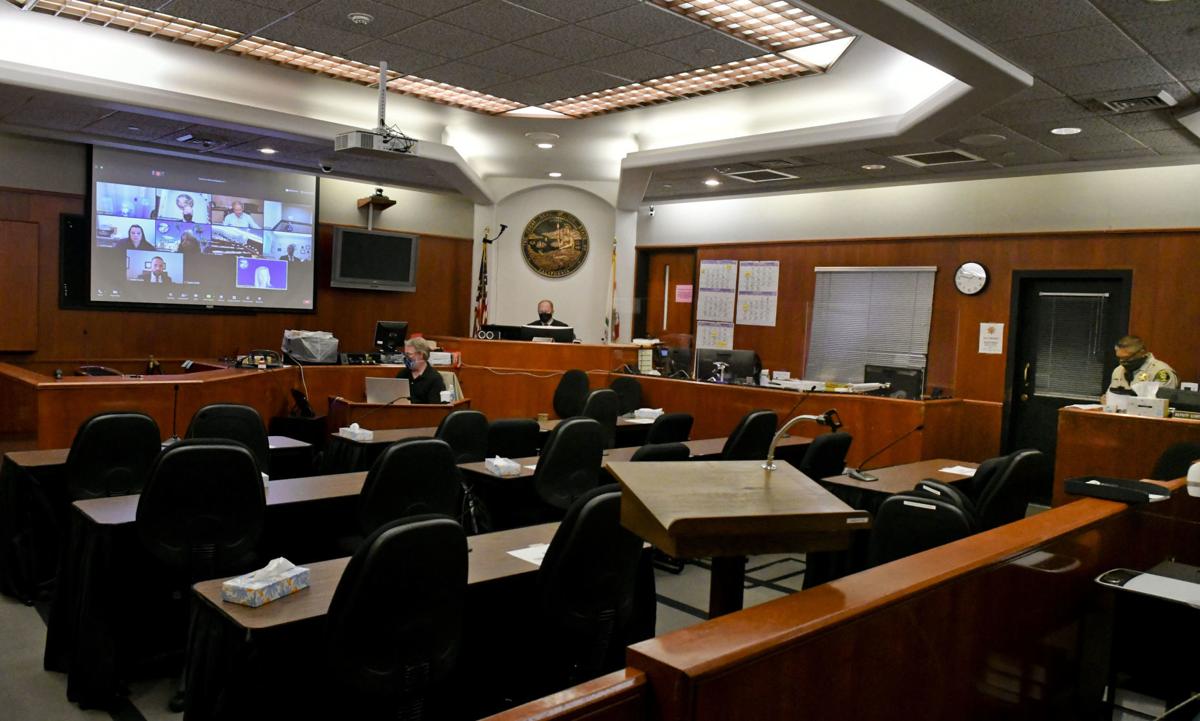 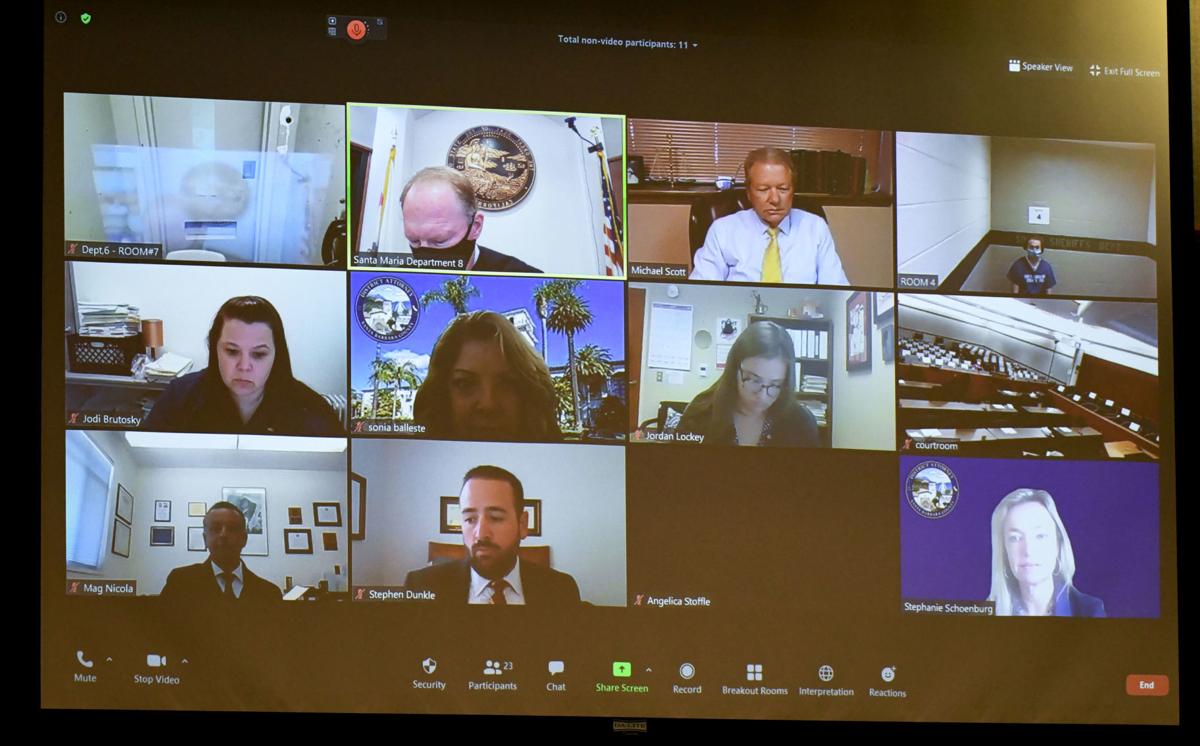 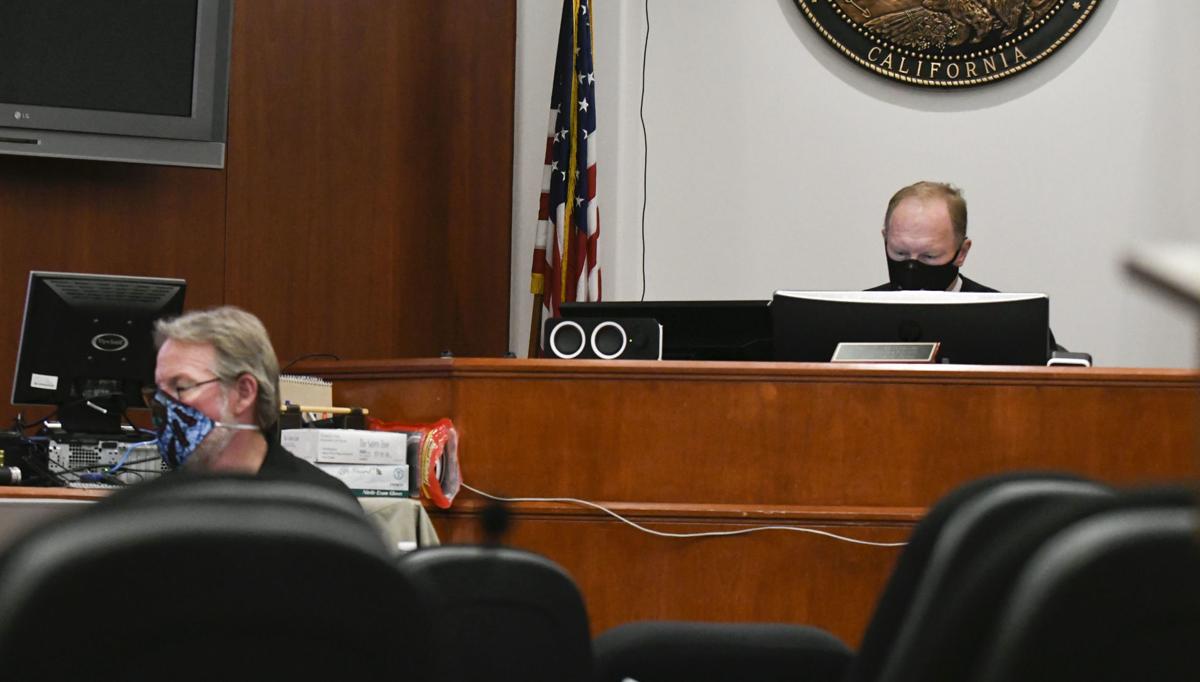 Judge John McGregor, top right, presides over the sentencing of Robert James Scott in Santa Maria Superior Court room on Thursday. Most of the court was empty for COVID-19 precautions. 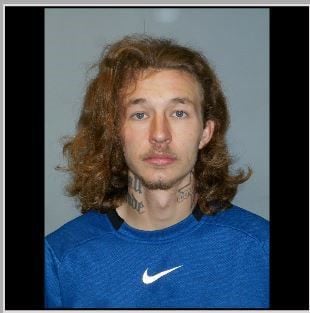 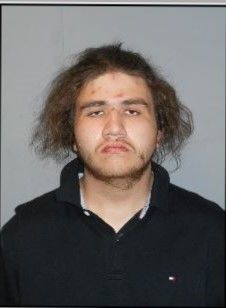 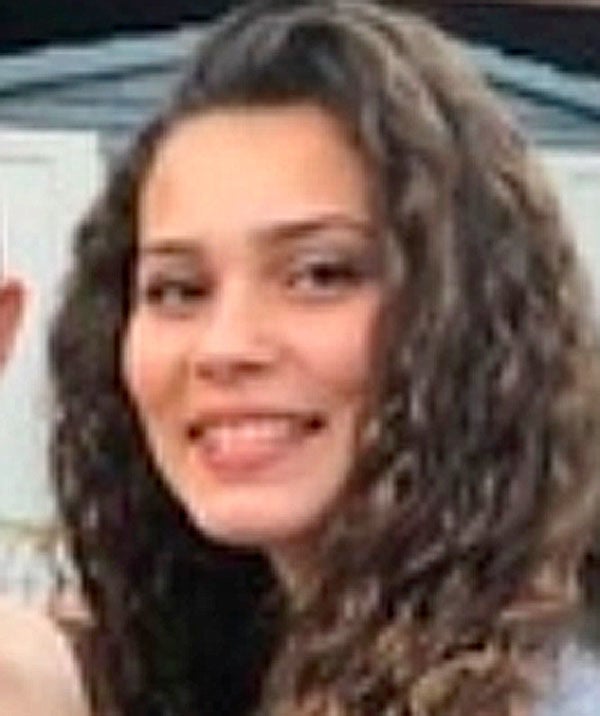 A Lompoc man on Thursday was sentenced to County Jail on felony charges for his role in the killing of 18-year-old Sarah Stoffle in March during an emotional court hearing in which several of the victim's family members gave impact statements.

Santa Barbara County Superior Court Judge John McGregor sentenced Robert James Scott, 23, to the upper term of three years in County Jail for accessory in the shooting death of Stoffle after the fact, and a midterm of three years for a felony car theft charge with a prior conviction in a previous case. Both sentences will be served concurrently.

Scott, who pleaded guilty to the charges in May, was ordered to serve 18 months in custody for both charges and 18 months of supervised release. He was credited for 121 days of time served in custody and 120 good behavior days for a total of 241 days.

Additionally, Scott was ordered to pay $6,001 to the California victim's compensation fund, a restitution amount that has yet to be determined and ordered to have no contact with Stoffle's family.

His sentence was part of a plea deal made with the District Attorney's Office in which prosecutors agreed to drop two misdemeanors, including marijuana possession and driving without a license, on the car theft case in January.

Stoffle was allegedly shot and killed by Brenden Michael Terry, 20, at a residence in the 300 block of North Y Street in Lompoc on March 25. Terry was arrested the same day and charged with murder on March 30. He pleaded not guilty.

Scott was charged with accessory on April 1 after Lompoc Police investigators learned he cleaned the sawed-off shotgun that was allegedly used to shoot Stoffle at point-blank range in the chest. Scott was on bail for car theft when the killing occurred.

Scott wasn't physically present in the Santa Maria courtroom but instead appeared via video conference from the Main Jail on a large projector screen where he was seen wearing a blue jumpsuit and mask due to the COVID-19 pandemic. His attorney, Michael Scott, and Deputy District Attorney Stephanie Schoenburg also appeared remotely.

The courtroom was limited to 24 people as the majority of the seats were labeled unavailable to encourage social distancing. No one was present in the room besides court personnel and reporters. Clear plastic windows separated the clerks from the rest of the court. Everyone was wearing a mask.

During the hearing, Stoffle's grandmother, mother and two sisters read impact statements urging McGregor to give the maximum sentence to Scott and not accept the plea deal. Technical glitches interrupted their statements and temporarily halted the proceedings several times.

"I am also mourning the loss of so many hopes and dreams," said Angelica Stoffle, Sarah's mother. "There's an emptiness inside of me that will haunt me for the rest of my life."

Serena Stoffle, Sarah's sister, interrupted and chided McGregor several times after he handed down the sentence.

"This was a joke," Serena said shortly after the hearing concluded. "Justice was not served today."

Despite the urging of her family, McGregor obliged the plea deal due to Scott's admission of the accessory charge, which was based on a statement given by the Scott's grandmother, who allegedly hid the weapon but revealed its location at the urging of her grandson, according to Schoenburg.

"I understand the additional pain I'm inflicting on the family by allowing the plea deal to go forward," McGregor said. "The court has no ability not to impose [good work time credits]."

Thousands of unlicensed cannabis plants and several hundred pounds of dried product linked to a grow site near Highway 166 were seized by detectives with the Santa Barbara County Sheriff's Office following a search warrant on Wednesday, according to a spokeswoman.

Santa Barbara County Sheriff's Office officials have agreed to begin improving living conditions at its jail facilities as part of a negotiated settlement in a federal class-action lawsuit reached earlier this month.

Santa Maria police officers are searching for two suspects and a victim in connection to an armed robbery on West Alvin Street earlier this month.

Francisco Garcia was unintended target of gang-related shooting in Lompoc

A Lompoc man who was killed last week was the unintended target of a gang-related shooting on West Chestnut Avenue, according to a police spokesman.

Judge John McGregor, top right, presides over the sentencing of Robert James Scott in Santa Maria Superior Court room on Thursday. Most of the court was empty for COVID-19 precautions.