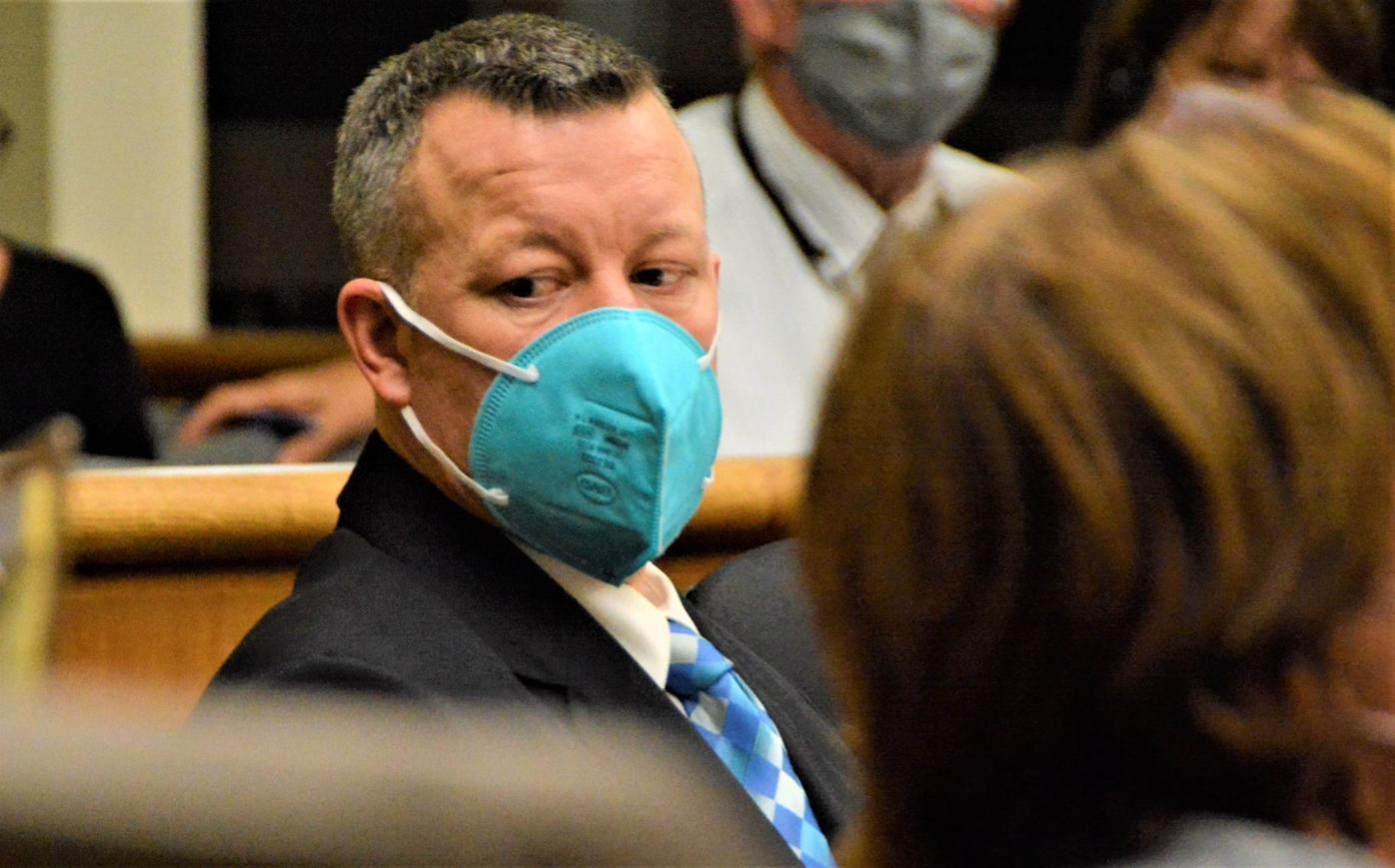 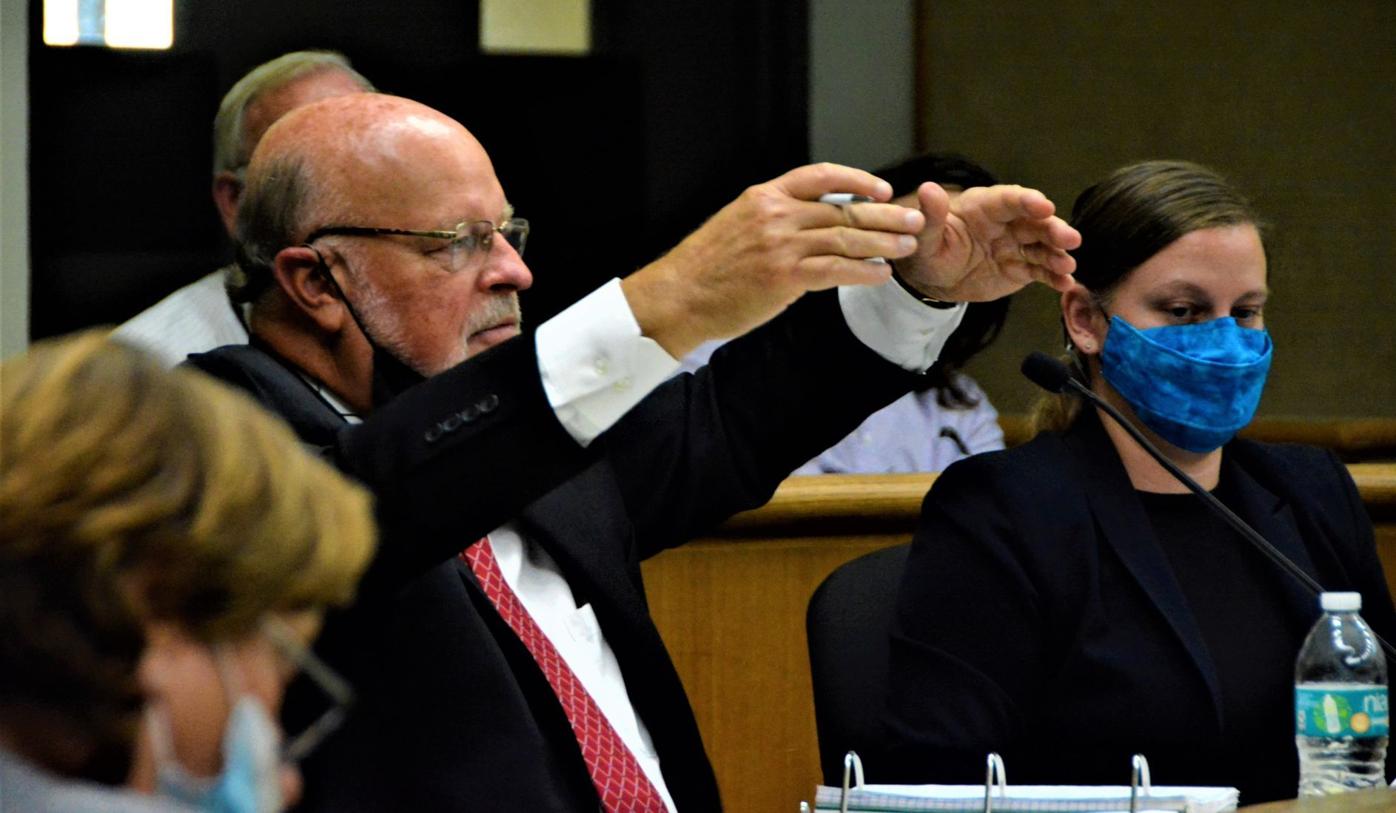 Attorney Bob Sanger, right, demonstrates how Kristin Smart hung on to Tim Davis for support as he walked her back to the Muir Hall dorm on May 25, 1996. 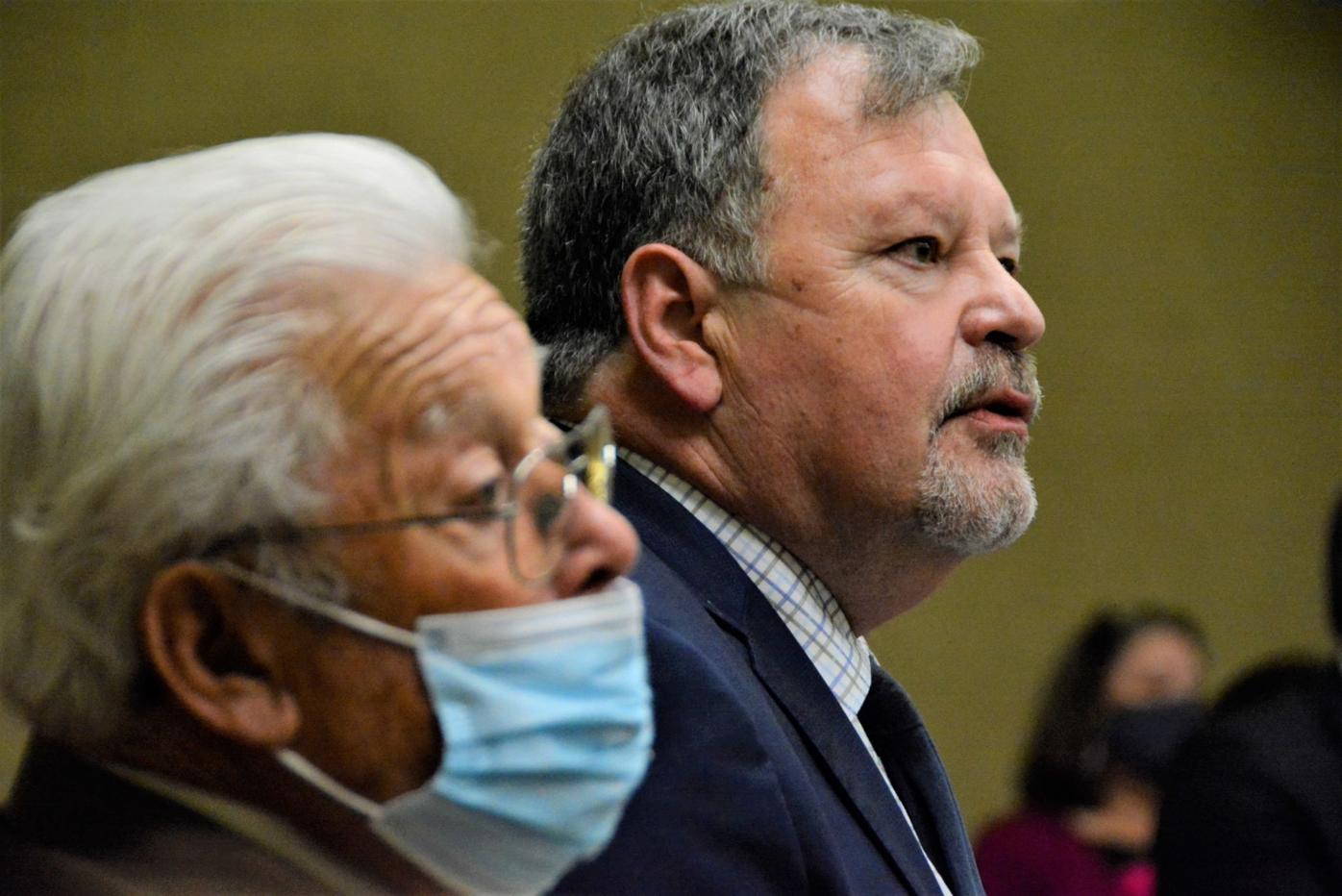 Two witnesses recounted in court Thursday details of decades-old encounters they allegedly had with Paul Flores, who is accused in the death and disappearance of 19-year-old Cal Poly freshman Kristin Smart, who went missing in 1996.

Tim Davis and Jennifer Hudson, who are now in their 40s, testified during a preliminary hearing in San Luis Obispo County Superior Court, where at times they expressed their discomfort over the memories that have played a crucial part in the investigation.

Davis has the distinction of trying to help Smart get back to her Muir Hall dorm room and also being one of the last people to see her alive on May 26, 1996 — facts that have weighed heavily on his life for the last 25 years, according to his testimony.

“You’re telling me,” Davis said, in an assertive tone.

Paul Flores, 44, of San Pedro is charged with Smart's murder. His father, Ruben Flores, of Arroyo Grande is charged with accessory to murder after the fact and is accused of hiding Smart’s body. Smart was declared legally dead in 2002 and her body has never been found.

Both men were arrested on April 13 and charged the next day following multiple search warrants that were served on their homes and included the use of ground-penetrating radar, cadaver dogs and power tools.

They appeared together, along with their attorneys Mesick and Bob Sanger, for the eighth day of their preliminary hearing, which is held to determine whether there’s enough probable cause to support the charges.

Paul and Ruben Flores have pleaded not guilty.

During testimony, which at times became intense during question-and-answer exchanges, Davis and Hudson were asked to remember what happened during their separate interactions with Paul Flores in 1996.

Davis, a junior at Cal Poly at the time, was at a friend’s 21st birthday party at 135 Crandall Way when sometime during the night, he said he noticed Paul Flores and Smart, who had apparently fallen on top of each other in what appeared to be an act of drunken playfulness.

Defense attorneys challenged Davis' memory, asking how much he drank that night — Davis remembered drinking about six beers over the course of five hours that night, and was able to describe the dew on the grass, the cold temperature and the walk back with his friend, Cheryl Anderson, Paul Flores and Smart in vivid detail.

They cut through campus until they reached the health center, where Davis split off after Anderson and Flores reassured him that a drunken Smart would get home safely.

Davis’ memories from the party and the 10-minute walk with Smart have been the bane of his existence for more than two decades, he said. He recalled multiple inquiries from news outlets and harassment from people he said tried to pressure him into testifying, including an instance where a person came to his house.

“Part of me thinks that some delusional idea that he wants me to have more information than I have from the 10 minutes or the 15 minutes or whatever, however how long this started from the lawn to giving [Smart] to Paul, that I’d know something more about this,” Davis said. “I tried to do the right thing, to pick her up and bring her back to the dorm.”

Later, Hudson was called to testify about two encounters she allegedly had with Flores in the summer of 1996.

Sometime in June or July of 1996 during a get-together at a house in San Luis Obispo, Hudson recalled a sentence uttered by a person she identified as Paul Flores which came after a radio pubic service announcement urging people to call the police with information about Smart’s disappearance.

“That bitch was a dicktease,” Flores said, according to Hudson, who described Flores as having pale skin and “dead eyes.”

After that sentence, Hudson recalled Paul Flores mentioning something about putting “under [my] ramp in Huasna.”

Several months later, Hudson said she encountered Paul Flores at the ramp after driving there with two “hippies” she met at the party who were invited to the location.

When Hudson got out of the car after arriving, she recognized Flores, who asked her if she wanted to go skinny dipping, according to testimony. She vomited after the encounter and immediately took off in her car, she said.

When asked why she didn't report the details until decades later, Hudson said she was scared.

Defense attorneys attempted to inquire into Hudson's alleged past drug use in attempts to get at her credibility, but Judge Craig Van Rooyen shot them down.

“I was a scared 17-year-old child fearing for being out on [her] own and having no one to fall back on,” Hudson said, wiping away tears. “[I’m] not sure if I reached out to law enforcement back then that they even would have listened.”

The preliminary hearing continues Monday at 9 a.m. in Department 5 of Superior Court.