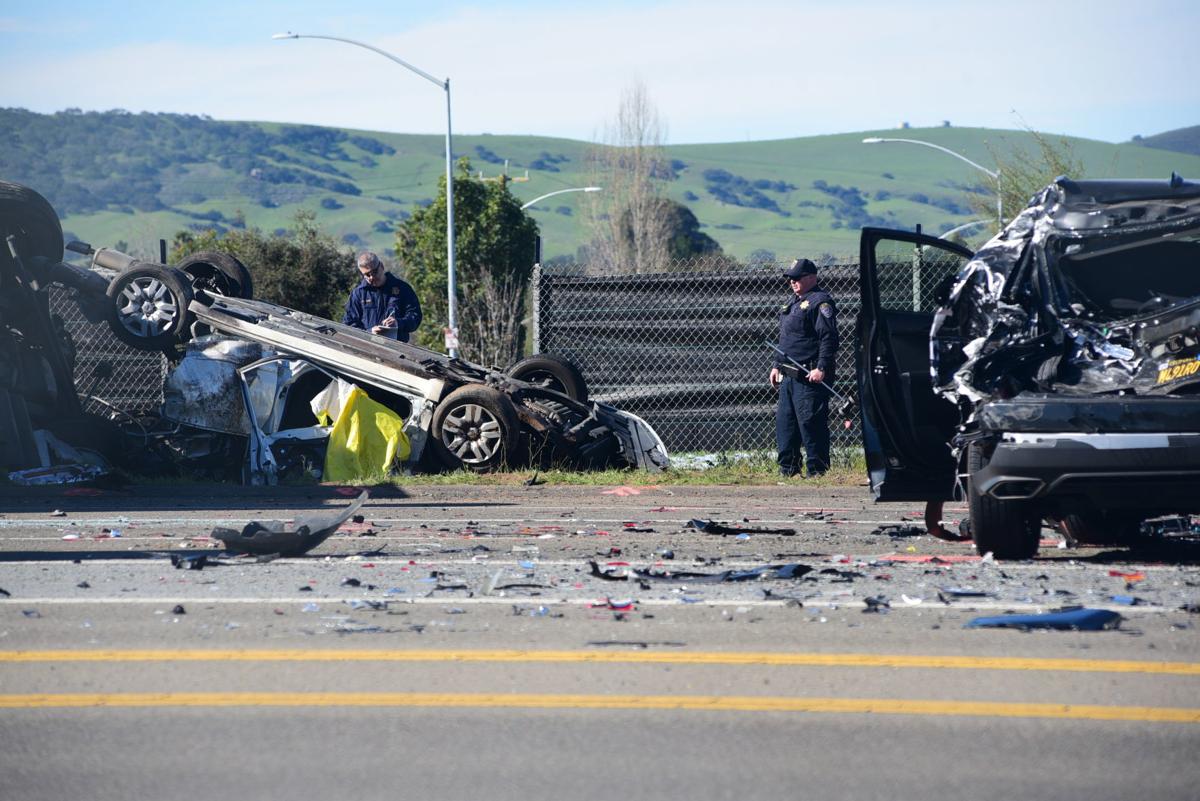 California Highway Patrol officers investigate a deadly multivehicle collision on Highway 135 in Orcutt on Feb. 7. Two people were killed as a result of the crash. 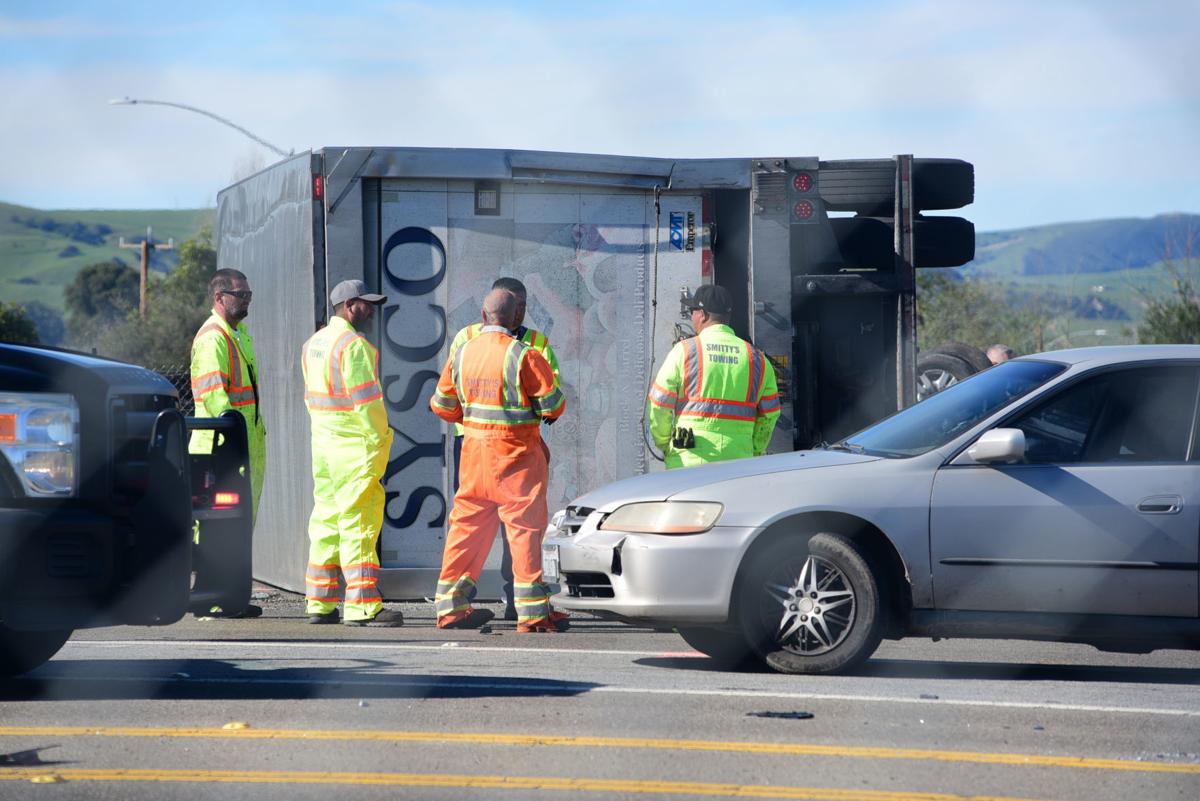 Recovery crews examine the wreckage of a deadly six-vehicle collision on Highway 135 in Orcutt on Feb. 7. Two people were killed as a result of the crash.

A Superior Court judge this week ruled there was enough evidence to uphold murder charges against a former Sysco truck driver accused of slamming into the back of a Nissan sedan on Highway 135, killing two and causing a pileup with four other vehicles.

Gilbert Patrick Pena, 57, of Orcutt was driving his big-rig at an unknown speed in the left lane of Highway 135 north of Union Valley Parkway shortly before 6:30 a.m. Feb. 7 when his big-rig struck the rear of the Nissan, killing the driver, 60-year-old Rick Motley of Orcutt, and his passenger, 25-year-old Jesse Gluyas of Solvang.

Several people were trapped in the other vehicles involved in the crash and had to be extricated by crews from the Santa Barbara County and Santa Maria fire departments. Two other people complained of minor pain and were treated at the scene.

Pena was arrested on suspicion of driving under the influence the day of the crash. He was charged with two counts of murder June 25 and pleaded not guilty the same day, according to court records.

Additionally, Pena faces a wrongful death lawsuit filed by the family members of Motley on April 26.

After a three-day preliminary hearing, Judge Patricia Kelly on Tuesday ruled that the prosecution met its burden for implied malice, citing evidence that Pena had enough subjective knowledge that driving impaired was a risk to human life.

In her ruling, Kelly cited several incidents allegedly captured on the big-rig’s dashcam in 2018 that showed Pena narrowly avoiding collisions and a subsequent reprimand from the company.

She referred to photos taken from inside the pickup Pena drove to work the morning of the crash that apparently showed prescription pill bottle warnings not to operate machinery and also referenced trace amounts of alcohol found in his blood after the crash.

Kelly added there was sufficient circumstantial evidence that Pena consumed beer after making a stop at 7-Eleven prior to arriving at his job that morning.

A surveillance video pulled from the convenience store allegedly shows Pena inside of his pickup truck consuming pills he took from a bottle, then taking a drink from a container with a shiny bottom.

Santa Barbara County Deputy District Attorney Stephanie Schoenburg said the container in the video was a can of beer.

The prescription medication found in the passenger side of the truck the morning of the crash was gabapentin, used to treat alcohol dependency with sedation a possible side effect, according to Schoenburg.

A year before the collision, Pena attended a rehabilitation program for “an issue” with alcohol and hydrocodone, which he called "largely successful," Schoenburg said.

“If he was popping pills, he would not be at the low end of therapeutic levels,” Sanger said. “[The] shiny container could have been a coffee cup.”

Sanger added that the results of Pena's blood draws taken the morning of Feb. 7 indicated that his blood alcohol level was 0.018%, which Sanger said was not illegal.

Schoenburg cited other instances to support her claim that Pena knew the consequences of driving in an impaired state.

She referred to Pena’s statements to an investigator that he was feeling sick and sleep-deprived the day before the collision and a warning from his wife to not drive that morning, arguing that Pena knew he should not have been driving in a drowsy state.

The family of a Santa Maria man killed in a multivehicle crash on Highway 135 near Orcutt has filed a wrongful death suit against Gil Pena, the tractor-trailer driver whose big rig slammed into the back of a sedan in a collision near Orcutt.

“He was intentionally driving that commercial truck in that impaired state,” Schoenburg said, adding that company records showed he accrued 272 hours of sick time and could have taken a day off.

Sanger cited other malice cases involving defendants who had “very high” blood alcohol levels and prior convictions, arguing that murder should be reserved for the most serious kinds of cases.

“We don’t have that here,” said Sanger, who added that Pena’s pride in showing up to work while sick simply showed he was a loyal employee. “There’s absolutely no evidence that he was drinking a beer when he took those pills.”

Pena is set to appear in court again at 8:30 a.m. Dec. 31 in Department 8 of the Superior Court in Santa Maria.

AB-5 hitting locally at trucking, publishing, other industries that use independent contractors

A new state law that became effective Wednesday is hurting companies that rely heavily on independent contractors, and causing a ripple effect…

California Highway Patrol officers investigate a deadly multivehicle collision on Highway 135 in Orcutt on Feb. 7. Two people were killed as a result of the crash.

Recovery crews examine the wreckage of a deadly six-vehicle collision on Highway 135 in Orcutt on Feb. 7. Two people were killed as a result of the crash.