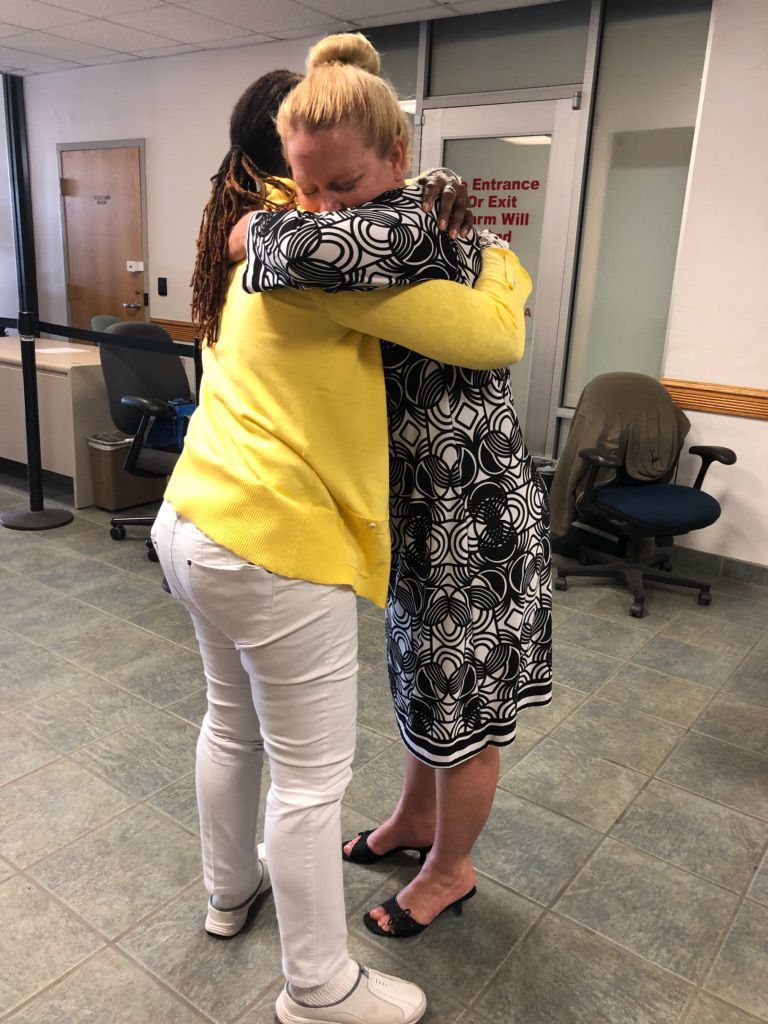 Senior Deputy Public Defender Lori Pedego, right, embraces Wanda Nelson on Thursday morning at the Lompoc Superior Court, after Nelson was found factually innocent of any wrongdoing in connection to the March 2013 death of Heidi Good. 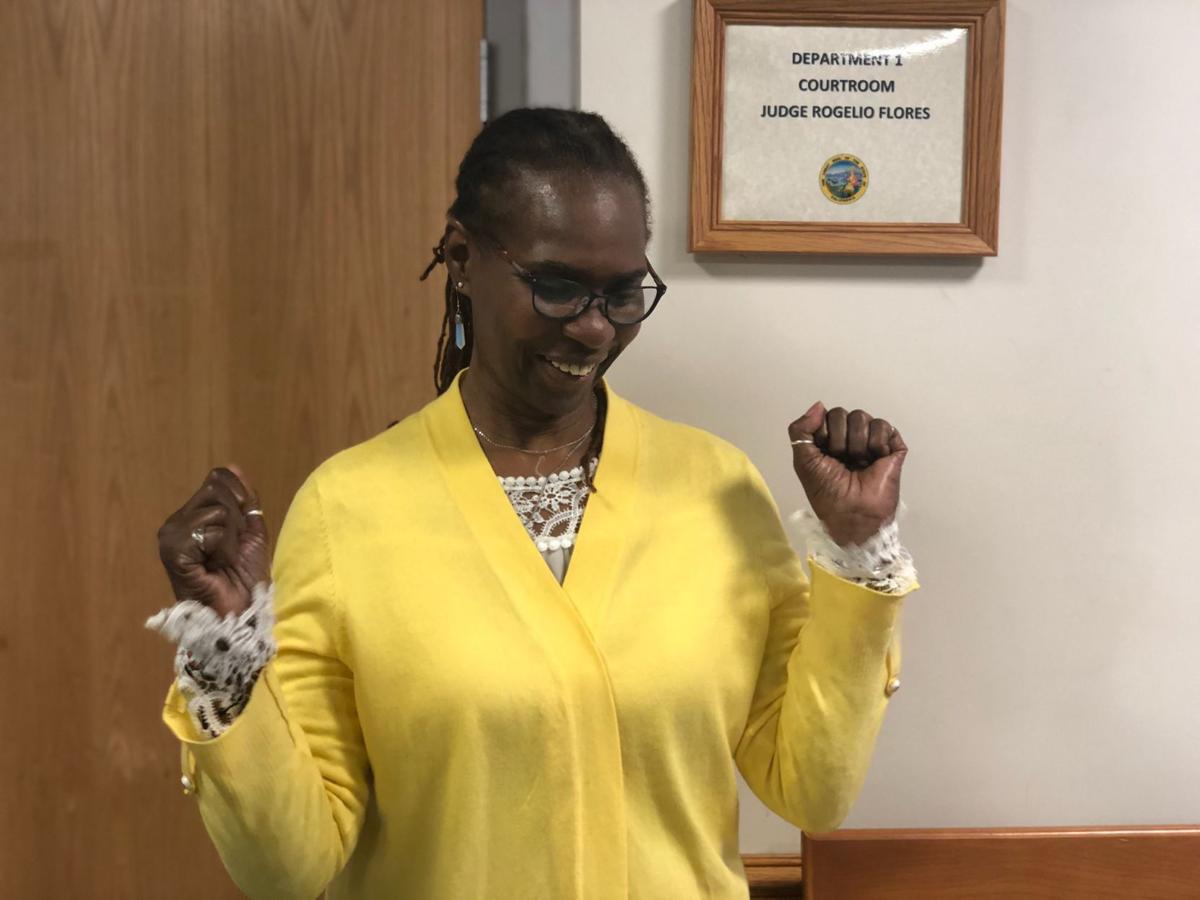 Wanda Nelson, who was a caregiver for Lou Gehrig's disease patient Heidi Good until her death in March 2013, was originally convicted of involuntary manslaughter. The appellate court overturned the conviction, and on Thursday, Lompoc Superior Court Judge Rogelio Flores found her factually innocent of any wrongdoing.

Three years after being indicted for the murder of a Solvang woman who suffered from Lou Gehrig's disease and two years after being sentenced for involuntary manslaughter, caregiver Wanda Nelson was officially declared an innocent woman by a judge Thursday.

The result is an extreme rarity, according to Senior Deputy Public Defender Lori Pedego, who represented Nelson.

In her 18 years of practicing law and trying several murder cases, "I've never filed a motion for the finding of factual innocence, because the bar is so high," Pedego explained.

"But we did this for Wanda," Pedego said. "We needed to have [a person of] authority say she's factually innocent. People don't understand the weight that bears on you when you're the accused."

Heidi Good, of Solvang, died in March 2013 -- eight years after being diagnosed with Lou Gehrig's disease, which causes motor neurons to degenerate and eventually strips patients of all their strength and ability to move, speak, eat and even breathe. Good was ventilator-dependent and needed 24-hour, round-the-clock care.

Nelson was Good's caregiver for seven years until her death, which was caused by asphyxiation.

Nelson and Good's mother, Marjorie Good, were indicted for murder in May 2015.

In February 2016, Nelson was found guilty of involuntary manslaughter. A separate jury for Marjorie Good, who was 90 at the end of trial, couldn't reach a verdict and a mistrial was declared. She was never retried.

Following the dismissal, Pedego stated her intention to file a motion to remove Nelson's DNA from the criminal database and to have the court declare Nelson factually innocent.

On Thursday at Lompoc Superior Court, both Pedego and Chief Deputy District Attorney Cynthia Gresser presented their arguments to Judge Rogelio Flores, who presided over the trial in Santa Maria.

Pedego maintained that no reasonable person could entertain a strong suspicion that Nelson could be guilty of involuntary manslaughter and that the prosecution's speculations were riddled with theories of motive that never rose to the level of circumstantial evidence pointing to murder.

She added that the grand jury based their indictment solely on an expert discussing the theory that Good could have been poisoned by an excess amount of medication that suppressed her breathing, which the prosecution later withdrew at trial.

Gresser countered there were plenty of individuals who reasonably suspected Nelson to be guilty -- from the grand jury, which indicted her, to the magistrate, who refused to dismiss her case, and the trial jury, which convicted her of involuntary manslaughter.

"There is reasonable interpretation in this case that there was circumstantial evidence of motive as well as opportunity [for murder]," said Gresser, who noted that Nelson changed her version of events the day Good died.

After hearing both arguments, the judge found there was no reasonable cause to have arrested Nelson for Good's death, and granted the motion of factual innocence.

"This was a fascinating trial from both sides, and Mr. David Bixby [Marjorie's attorney], as well," Flores said. "All of you did a difficult job in a very conscientious way."

Outside the courtroom, Nelson fell to her knees, cried, hugged Pedego and thanked God.

"I never stopped praying," Nelson said. "The day I left Heidi to go to the store, I told her I loved her, and said, 'I'll see you when I get back.' So to return and see that happen, it was a shock."

"God keeps working for me," she added. "Truthfully speaking, I knew it was going to be a good outcome."

As Judge Rogelio Flores' 31-year chapter on the bench came to a close Friday, over 400 people packed the Abel Maldonado Community Youth Center…

Two years after being sentenced for the death of an ALS patient from Solvang, caretaker Wanda Nelson's case was officially dismissed Tuesday, …

A 90-year-old Solvang woman who was on trial for conspiring to kill her daughter three years ago, has been acquitted of first- and second-degr…

Caretaker found not guilty of murder in Solvang woman's death

Wanda Nelson has been found not guilty of first- or second-degree murder in the death of Solvang resident Heidi Good.

Exoneration of caregiver in 2013 death of Solvang ALS patient reversed

A caretaker acquitted of murdering a Solvang ALS patient in 2016 is suing Santa Barbara County officials for prosecutorial misconduct.

Senior Deputy Public Defender Lori Pedego, right, embraces Wanda Nelson on Thursday morning at the Lompoc Superior Court, after Nelson was found factually innocent of any wrongdoing in connection to the March 2013 death of Heidi Good.

Wanda Nelson, who was a caregiver for Lou Gehrig's disease patient Heidi Good until her death in March 2013, was originally convicted of involuntary manslaughter. The appellate court overturned the conviction, and on Thursday, Lompoc Superior Court Judge Rogelio Flores found her factually innocent of any wrongdoing.