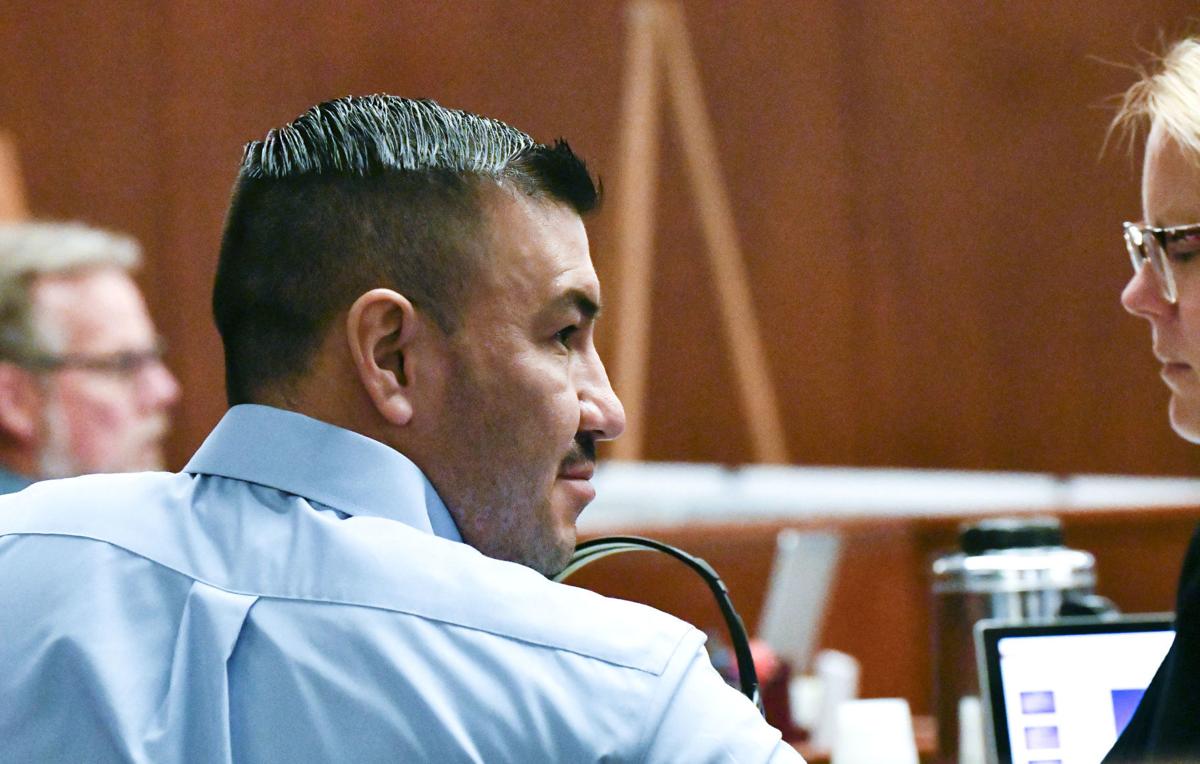 Defendant Victor Aureliano Martinez talks to his attorney Lori Pedego through an interpreter (not shown) in Santa Maria on Wednesday. Martinez and Jose Villagomez are on trial for the murder of Marilyn Pharis. 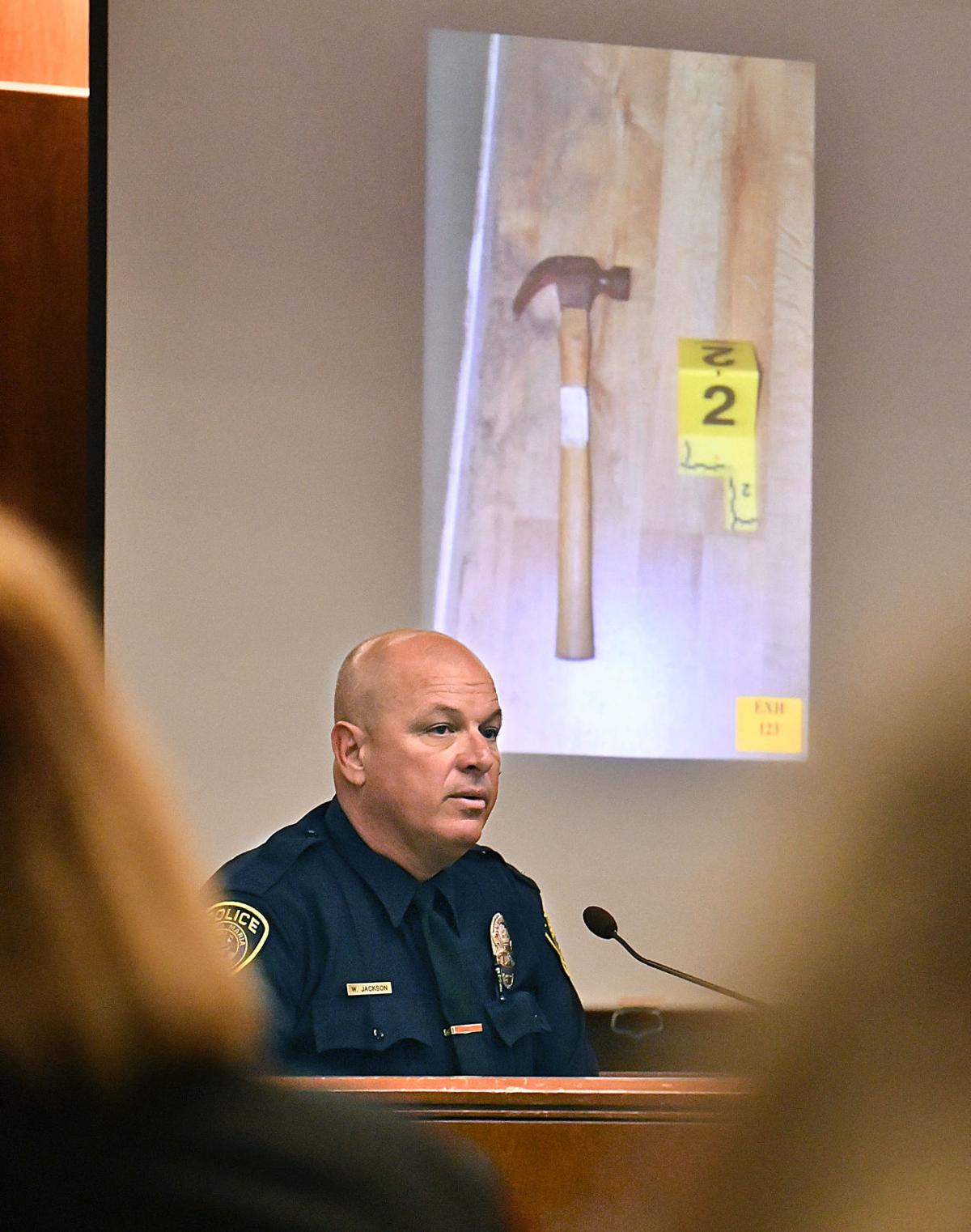 Santa Maria Police Officer William Jackson testifies about a photo of a hammer presented as evidence in the murder trial of defendants Victor Aureliano Martinez and Jose Villagomez on Wednesday.

Marilyn Pharis remained remarkably calm and composed after she was brought to the hospital, despite being severely "beaten, bloodied and strangled," a doctor testified Wednesday morning.

The testimony came as the trial of Victor Martinez and co-defendant Jose Villagomez entered its third day in Judge John McGregor's courtroom at Santa Maria Superior Court. The pair are being tried for the 2015 murder of Pharis, a 64-year-old Air Force veteran who worked nights as a satellite tracker at Vandenberg Air Force Base.

Opening statements were held separately for the defendants on Monday and Tuesday, but on Wednesday the juries for each were seated together in Department 7, where they will remain for the duration of the trial.

Wednesday's testimony focused on the initial medical assessment of Pharis when she was admitted to Marian Regional Medical Center on July 24, 2015, with Dr. Matthew Cote stating on the stand that he immediately noted large amounts of blood coming out of her nose, mouth and ears when he saw her, and feared that the swelling of her throat could close her airways and ultimately kill her.

Pharis told him she was strangled three times, Cote testified.

Villagomez and Martinez entered Pharis' home on July 24, 2015, using a metal crowbar to break into her garage door, then went into Pharis' bedroom where she was asleep in her closet after working a night shift.

Martinez reportedly strangled Pharis multiple times, causing her to fade in and out of consciousness. Every time she came to, he strangled her again, according to the prosecution.

After the pair left the home, police found Martinez an hour and a half later hiding on West Cox Street under a woodpile and he was taken into custody. During his interrogation by police, Martinez first accused Villagomez of strangling and beating Pharis with a hammer before he took responsibility for the attack, according to the prosecution.

Under Bramsen's questioning, Cote said Pharis' neck and eyes were extremely swollen, and he was concerned that she sustained significant brain injury and a skull fracture. The strangulation affected her airways, jugular vein and carotid artery, which stopped blood flow to her brain and caused her to lose consciousness multiple times.

"I took care of lots of trauma victims, but none with the degree of composure Ms. Pharis had," Cote said. "It was very unusual."

With the risk of swelling in her airways worsening and causing them to close, doctors continued to closely monitor Pharis and run more CT scans and chest X-rays, Cote said.

Cote testified that while Pharis had difficulty breathing and had chest pain, examination of her chest X-ray showed that her lungs were normal, her heart was a normal size, no fluid had collected in her lungs and no fractures were found in her chest.

Pharis' eyes and face were swollen and fractured, Cote added, but she sustained no brain bleeding. Her airway didn't swell further. No testing was done below her chest and other low extremities.

"Nothing was noted in that report that needed immediate [preventative] attention," Cote testified, and also stated that Pharis' test results eliminated some of his immediate concerns.

During his cross examination, Scott noted that if a carotid artery was blocked and a brain stopped functioning once deprived of oxygen, results can be fatal, but that wasn't the case for Pharis, which Cote acknowledged.

Cote also said that Pharis was able to speak in full sentences and converse normally during his initial evaluation.

Air Force veteran Marilyn Pharis wanted badly to live, and "she fought for her life" when Victor Martinez strangled her inside her home on Jul…

The prosecution and defense agreed Tuesday that Marilyn Pharis died after developing blood clots following a brutal attack in July 2015, but d…

Defendant Victor Aureliano Martinez talks to his attorney Lori Pedego through an interpreter (not shown) in Santa Maria on Wednesday. Martinez and Jose Villagomez are on trial for the murder of Marilyn Pharis.

Santa Maria Police Officer William Jackson testifies about a photo of a hammer presented as evidence in the murder trial of defendants Victor Aureliano Martinez and Jose Villagomez on Wednesday.