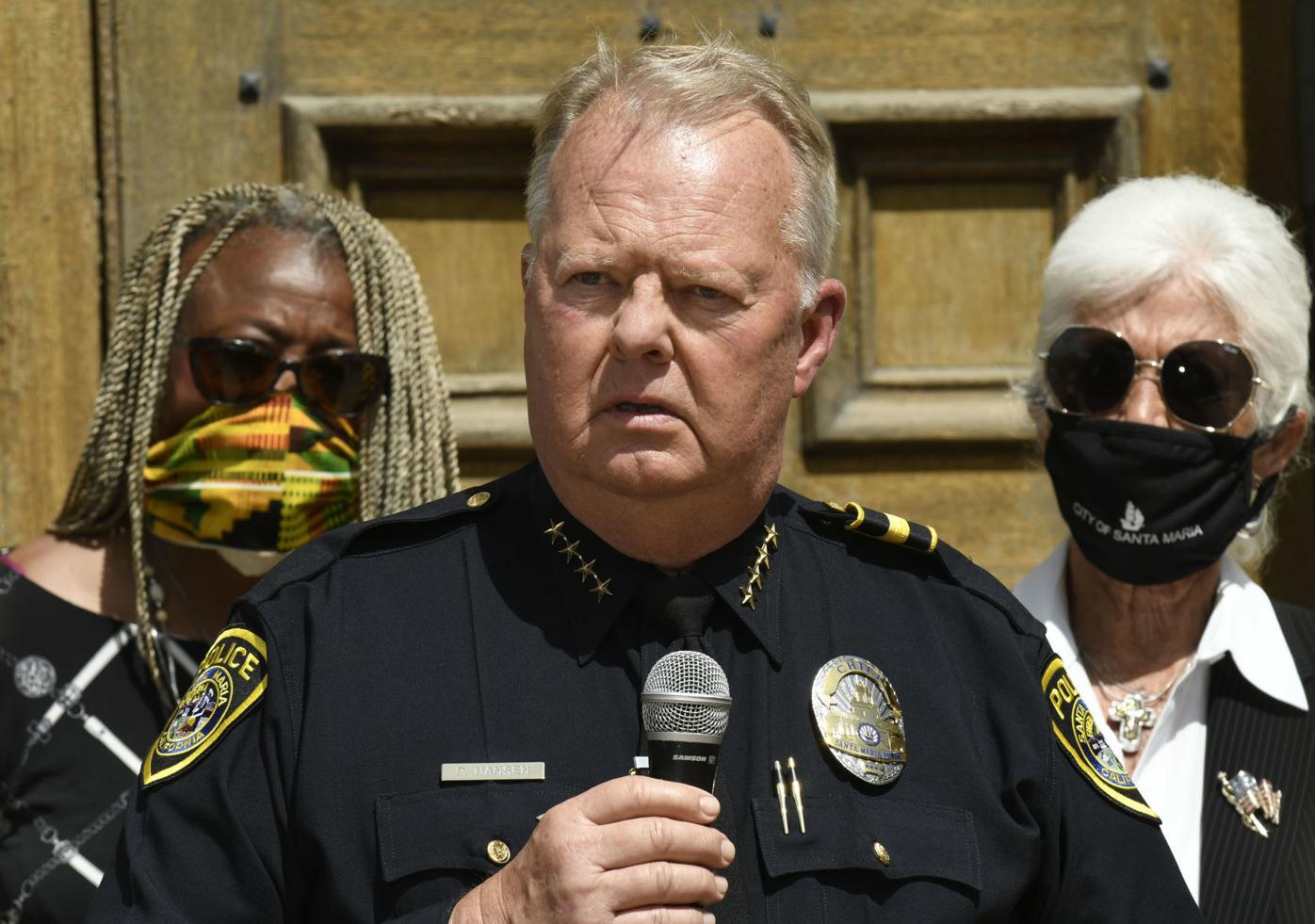 Santa Maria Police Chief Phil Hansen talks about the May 31 protest and subsequent vandalism at a June 1 press conference as Lawanda Lyons-Pruitt, president of the Santa Maria-Lompoc NAACP; and Mayor Alice Patino listen at City Hall. 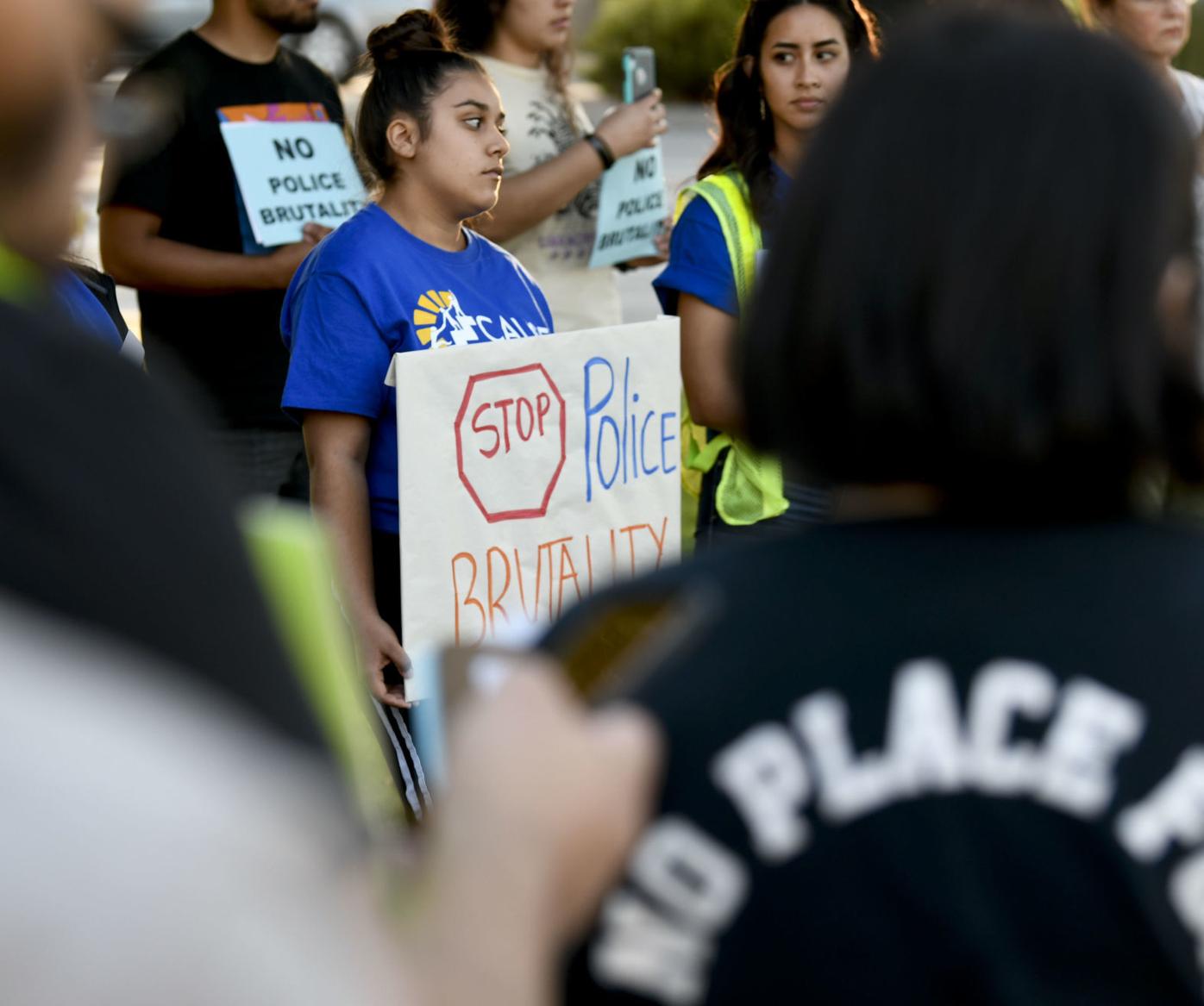 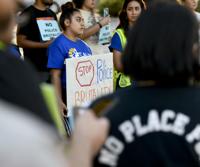 Protesters gather outside Santa Maria City Hall on Oct. 25, 2019, during a rally in response to a viral Santa Maria Police arrest video.

Santa Maria Police Chief Phil Hansen talks about the May 31 protest and subsequent vandalism at a June 1 press conference as Lawanda Lyons-Pruitt, president of the Santa Maria-Lompoc NAACP; and Mayor Alice Patino listen at City Hall.

Protesters gather outside Santa Maria City Hall on Oct. 25, 2019, during a rally in response to a viral Santa Maria Police arrest video.

An independent report of the Santa Maria Police’s use-of-force review and other internal processes released earlier this month gave a largely glowing review of the department, noting the progress since similar reports were issued five and six years ago.

Initiated by Police Chief Phil Hansen in April 2020, the report was prepared by the OIR Group, a Los Angeles-based independent police oversight agency, and noted the work “to cement [the department’s] progress” in the years following a dark period that included the deadly 2012 police-involved shooting of fellow officer, 29-year-old Alberto Covarrubias.

While mostly positive, the report gave 16 recommendations, which is far lower than the 57 recommendations included in the original 2014 report following the Covarrubias shooting, and the 2015 follow-up, which made additional suggestions.

“With the sole exception of the department’s efforts to review the relatively infrequent deadly force incidents — which we found could and should be more broad and holistic — we were largely impressed by SMPD systems and operations,” read the December 2020 report.

Hansen presented the report in person to the Santa Maria City Council on Tuesday, along with its authors, Michael Gennaco and Julie Ruhlin, who phoned in to the meeting due to COVID-19 guidelines.

While council members were impressed, Hansen described the report as the result of "team accomplishments."

“I’m proud of how we’ve done, but I know there's always work to be done and we could always get better,” Hansen said.

Council members issued a proclamation congratulating Hansen on his retirement and praised him for his work at the department.

“I feel uniquely qualified to say that I’ve seen the pendulum swing in both directions, the highest and the lowest,” said District 2 Councilman Mike Cordero, who is a retired SMPD lieutenant. “I don’t know if it’s ever been higher than it is today.”

“I wholeheartedly wanted to say that I really appreciated working with you,” said District 3 Councilwoman Gloria Soto, while also noting her limited time working with Hansen.

Each section analyzed how the department reviews its uses of force processes, addressed misconduct allegations and operational issues, including transparency.

While the report found the department to be better than most other similarly-sized agencies when it came to responding to deadly force incidents, it found room for improvement in its administrative investigation, and the method in which supervisors and noninvolved officers provide immediate medical care to people shot by police.

“The department should initiate an administrative investigative or review of the incident at the very outset,” according to the report, which also urged the department to standardize the practice of interviewing involved officers before their shifts end.

Other recommendations included releasing more data on police complaints and other information, and improving public engagement when it comes to hiring and promoting police officers.

Overall, the report praised the department’s effort to use each use-of-force incident as learning opportunities and willingness to be scrutinized.

“The department’s receptivity to independent audits — beginning with our 2014 review and continuing through this latest engagement — differentiates it from the large majority of police agencies in the state,” the report read. “We hope this report will serve as a reinforcement for the positive steps [Santa Maria Police] department has taken over the past five years and that the recommendations we make throughout will be received with the same level of openness and consideration.”

The full report can be found on the city of Santa Maria's website.