Santa Barbara County Board of Supervisors Chairman Gregg Hart, right, listens as Public Health Department Director Van Do-Reynoso explains the declaration of a public health emergency and orders requiring social distancing and the cancellation or postponement of large events in this image taken from a livestreaming feed. 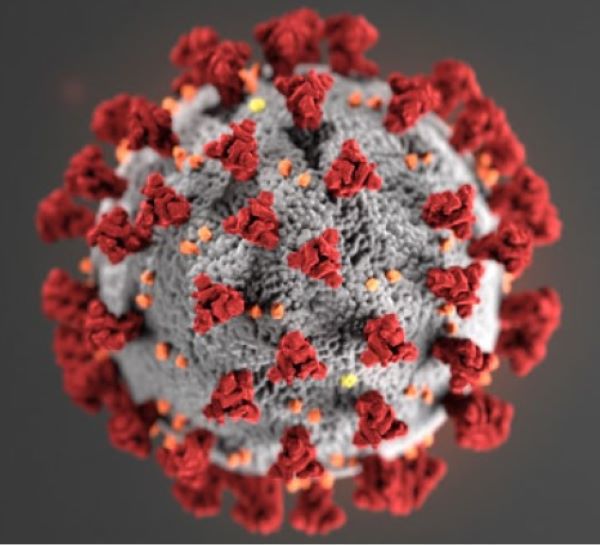 A colorized image shows what an individual coronavirus looks like under an electron microscope.

A public health emergency due to the COVID-19 global pandemic was declared Thursday by Santa Barbara County public health officials, making the state’s guidelines a mandatory order through March 30.

In a 6:30 p.m. press conference, county health and emergency officials announced the order that applies not only to the unincorporated area of the county but also its cities.

Solvang City Council held a special emergency meeting at 7 p.m., where it unanimously adopted the orders, canceled the permit to allow cyclists on the two long routes of the Solvang Century bike ride to pass through the city and directed staff to take other actions to mitigate the impact on business.

The order issued by Dr. Henning Ansorg, the county health officer, requires that gatherings of 250 or more people be canceled or postponed and requires smaller gatherings to use “social distancing” of six feet between individuals attending the events or to cancel or postpone those as well.

More information about COVID-19 and Santa Barbara County’s response to the disease is available at the Public Health Department website at publichealthsbc.org.

The county also has activated its Joint Information Center at the Emergency Operations Center and the Call Center to answer community questions. The Call Center can be reached toll-free at 833-688-5551.

Large gatherings include concerts, conferences and professional, college and prep sporting events, whether held indoors or outdoors, and Solvang City Manager Xenia Bradford told the council that county officials said the Solvang Century ride, which actually would begin and end in Buellton this weekend, would fall under the order.

The emergency order also requires that activities involving individuals at high risk of complications — those over age 60 and those having chronic heart, lung or similar medical conditions — be limited to 10 people and adhere to the social distancing separation.

Retirement and assisted living facilities, developmental homes and support groups for people with health conditions would fall under that portion of the order.

County Board of Supervisors Chairman and 2nd District Supervisor Gregg Hart, who moderated the press conference, said the county has no plans to only provide public access to the supervisors’ and Planning Commission meetings through live streaming video while barring physical attendance.

However, he said the county would practice social distancing in those meetings as it did for the press conference, where county officials and media representatives were all separated by six feet from each other.

Hart said the emergency was declared and the order issued to protect public health and to slow the rate at which novel coronavirus 2019, which causes coronavirus disease, or COVID-19, is being transmitted.

“This is the time all of us must act in the best interest of our community and work together to contain this virus,” he said, adding the order was developed through consultation with public health professionals with guidance from the state Department of Public Health and the Centers for Disease Control and Prevention.

“These actions are designed to protect our community and to keep us all safe from what has now been declared by the World Health Organization as a global pandemic.”

“Mandating social distancing is timely and a proven strategy in prior pandemics at delaying the rates of transmission and reducing illness and death,” Do-Reynoso said.

She said the order issued by the county public health officer would be amended as needed, and Ansorg said it would be reviewed at the end of March to see if it should be extended.

Paige Batson, deputy director of the Community Health Division, repeated that Santa Barbara County has zero cases of COVID-19, but the county is monitoring nine individuals identified by the California Department of Public Health as travelers.

Batson said the county has monitored a total of 61 individuals, all of whom were cleared of having the disease, and tested six individuals classified as “persons under investigation” because they met certain criteria, and all six were also cleared of the disease.

She said California now has 17 labs that test for COVID-19, including labs in San Luis Obispo and Ventura counties, plus two commercial labs.

“And while testing has been expanded, its important for everyone to know that there is still certain criteria that needs to be met for persons to be tested because we have to prioritize those that are at greater risk of having adverse outcomes,” Batson said.

“The main point here is for everyone to understand that COVID testing is not necessarily going to be offered or provided upon request.”

Coronavirus in Santa Barbara County: Events that have been cancelled or rescheduled

Santa Barbara County Board of Supervisors Chairman Gregg Hart, right, listens as Public Health Department Director Van Do-Reynoso explains the declaration of a public health emergency and orders requiring social distancing and the cancellation or postponement of large events in this image taken from a livestreaming feed.

A colorized image shows what an individual coronavirus looks like under an electron microscope.