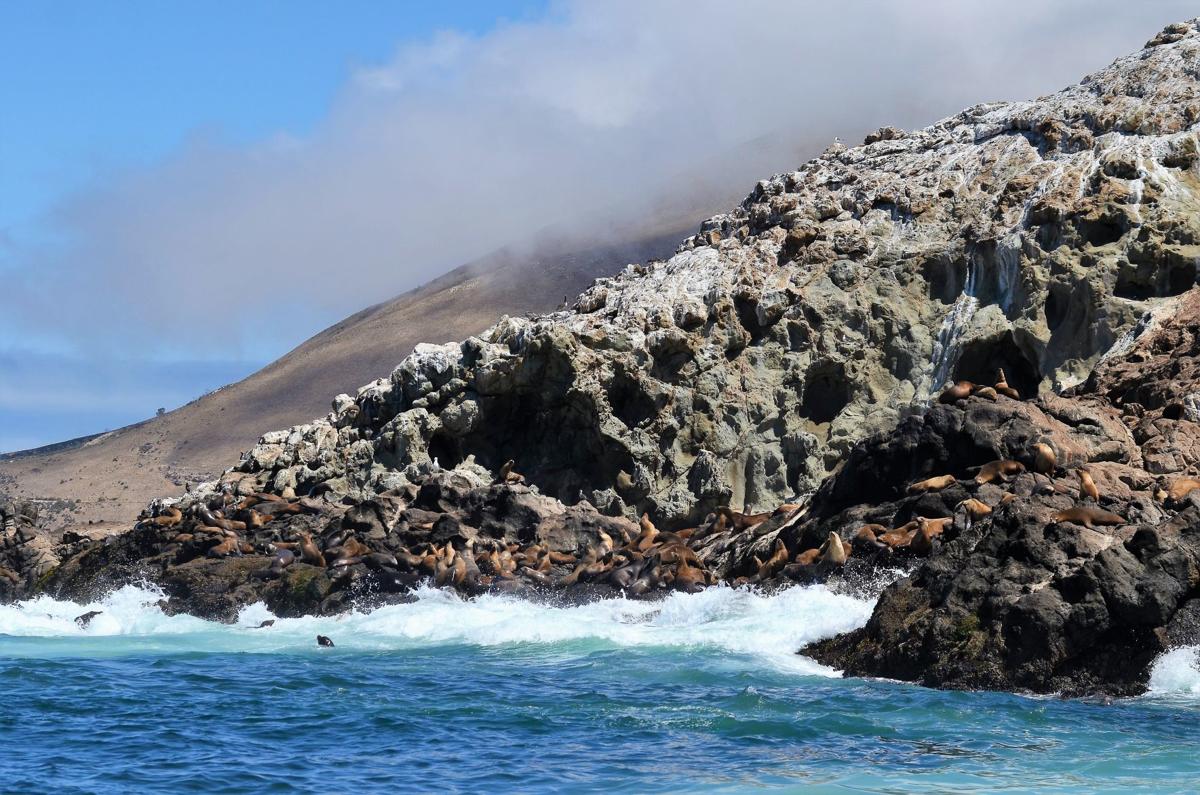 Seals congregate along the waterline of Lion Rock, a small rocky island located about 1,000 feet off the Pecho Coast.

Last Tuesday marked the end of the 2019 rain year, which runs from July 1 through June 30. Wednesday was the start of the 2020 rain year.

The Lompoc Airport reported 15.62 inches, or 106% of average, while the Santa Ynez Airport recorded 14.43 inches, or 104% of typical. Overall, it was about 112% of normal in northern Santa Barbara County.

The 2019 rainfall season produced less rain. Santa Maria Public Airport saw 10.95 inches of precipitation, or 85%of average. The Lompoc Airport reported 11.32 inches, or 77% of normal, while the Santa Ynez Airport recorded 12.55 inches, or 90% of typical.

Up north in San Luis Obispo County, Cal Poly recorded 15.88 inches, or 71% of average. At the same time, Rocky Butte, one of the wettest locations along the Central Coast near Hearst Castle, reported 28.13 inches of rain, or about 70% of average.

Farther northward, the San Francisco Bay Area reported around 49% of normal, while to the south, the Los Angeles Basin saw 100% of average rainfall.

Over the years, many government agencies have transitioned from the “rainfall year” to a “water year” designation. The National Weather Service forecast offices in California changed in 2015.

Hydrologists define a water year as the 12-month period that starts Oct. 1 and continues through Sept. 30 the following year.

The state’s water managers and hydrologists tend to like the water year designation because October usually has the least amount of stream and river flows, and it tends to center on the months in which California receives most of its rainfall.

Since we live in a Mediterranean climate with a wet and dry season, many other California organizations with interest in rainfall totals, like Jan Null’s Golden Gate Weather Services in the Bay Area, Cal Poly Irrigation Training and Research Center — which maintains the university’s rain gauge and records and archives rainfall data back to 1870 — and Pacific Gas and Electric Co.’s Diablo Canyon Power Plant, will continue to use the historical rain year designation.

No drought, dry season ahead?

Looking back, the lack of moisture in February drove most of California from the D0 Abnormally Dry to D1 Moderate Drought category by early March, according to the weekly U.S. Drought Monitor.

Much of San Luis Obispo County and all of Santa Barbara and Ventura counties were listed at the D1 Moderate Drought level.

The well-above-average rainfall of March and April dropped the drought level from the D0 category throughout the Central Coast to “None” in Monterey, San Luis Obispo, and Santa Barbara counties. In fact, the areas all the way south to San Diego County are in the “None” category.

Looking ahead, what will the 2020 rain year bring?

This week, NOAA’s Climate Prediction Center continues to advertise the infamous neutral condition — known as “El Nothing” or “El Nada” — will continue through the summer. Unfortunately, more and more of the models are venturing into La Niña territory.

Since 1950, NOAA has used sea surface temperatures to categorize the amount temperatures deviate from the average, in other words, an anomaly.

Here are some beachgoer summer safety tips from PG&E:

• Keep alert for local weather conditions. Check to see if any warning signs or flags are posted at beaches or parks you’re visiting.

• Make sure everyone has proper skills to swim. Keep an eye on young children and check flotation devices for leaks.

• Every child under 13 must wear a U.S. Coast Guard-approved life jacket when on a moving vessel that is 26 feet or less in length.

• Don’t dive or jump into unfamiliar water. Shallow water or submerged trees or rocks could cause serious injury.

Seals congregate along the waterline of Lion Rock, a small rocky island located about 1,000 feet off the Pecho Coast.