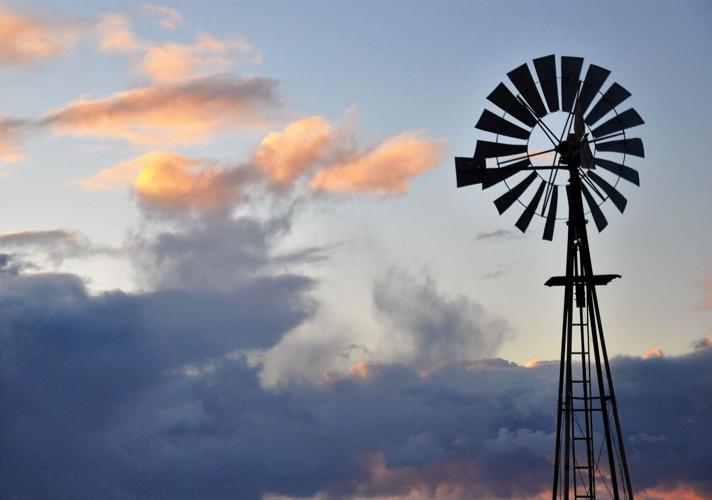 Historically, along the Northern and Central California coast, spring is notorious for strong and persistent northwesterly winds, but it has been even more pronounced this year.

Historically, along the Northern and Central California coast, spring is notorious for strong and persistent northwesterly winds, but it has been even more pronounced this year.

Highly experienced Central Coast mariners, kite surfers, seafaring kayakers and coastal farmers and ranchers have told me this is the windiest spring they have ever seen.

Historically, along the Northern and Central California coast, spring is notorious for strong and persistent northwesterly winds, but it has been even more pronounced this year. After reviewing the wind data from Diablo Canyon Power Plant, I’ve confirmed that their observations are correct.

I’ve been forecasting weather along the Central Coast since 1991 and have never seen this.

Overall, the northwesterly winds over the decades have gradually become stronger during spring and summer. During El Niño years, they tend to decrease, while during La Niña cycles, they increase. This condition has produced vast amounts of upwelling and frigid seawater temperatures. These winds have also mixed out the marine/temperature inversion layer, leaving mostly clear skies with plenty of sunshine.

My solar panels have been operating since 2015 in Los Osos and have never produced so much energy during spring. Meanwhile, cloud cover measurements collected from San Luis Obispo County Regional Airport and the Santa Maria Public Airport show a downward trend this century.

This year’s record gales seem to be verifying a long-term trend of more persistent and stronger northwesterly winds. I’ll try to explain what it means for our weather in San Luis Obispo County. As California becomes warmer, a deeper thermal trough develops over the Great Central Valley, which creates a stronger pressure gradient between the waters off our coast and the interior. This condition often produces a higher frequency of occurrence of northwesterly (onshore) winds and cooler air temperatures at the lower levels of the atmosphere.

Over the past few decades, this hypothesis seems to be verifying. I compared high-temperature record data points from the inland valleys (Paso Robles Municipal Airport) and coastal valleys (San Luis Obispo County Regional Airport and the Santa Maria Public Airport) and discovered an interesting trend.

During the months with the historically strongest northwesterly winds — March through September — the Santa Maria airport broke temperature records 65 times and the San Luis Obispo airport broke temperature records 87 times this century. Meanwhile, away from the ocean, the Paso Robles airport smashed records 104 times. Nature’s ramped-up air conditioner is keeping the coastal regions cooler. However, during October through February, when the northwesterly winds are historically at their lowest, the coastal regions broke more temperature records this century than the inland areas.

Not only were the northwesterly winds more robust than average along the Central Coast this year, but the trade winds — easterly winds that flow in the Earth’s equatorial region — also were more robust than average, which is a classic La Niña condition. In fact, the current La Niña, which started in the summer of 2020, has reached an intensity that ranks it “among the strongest springtime La Niñas in the historical record dating back to 1950,” according to Michelle L’Heureux of the National Oceanic and Atmospheric Administration.

“Though La Niña is favored to continue through the end of the year, the odds for La Niña decrease into the Northern Hemisphere in late summer (52% chance in July through September 2022) before slightly increasing through the Northern Hemisphere in fall and early winter 2022 (58-59% chance),” according to the Climate Prediction Center. In other words, “triple-dip La Niña,” the third straight La Niña fall/winter season, has only occurred twice since 1950.

This is not good news as far as precipitation is concerned. La Niña conditions often keep the storm track to the north, while El Niño events tend to drive the storm track farther south into Central California. The first six months of 2022 were the driest on record at Cal Poly since 1869. The San Luis Obispo university had recorded only 1.5 inches of rain as of Monday. The previous most-parched start to the year was in 1972, when 2.78 inches fell.

The U.S. Drought Monitor dropped much of San Luis Obispo and Santa Barbara counties, except the coastal regions, from D2 (severe drought) to D3 (extreme drought) classifications. The far eastern border of San Luis Obispo County and much of Kern County are now classified as D4 (exceptional drought), the worst level of drought. The dearth of storms this year is probably related to the current La Niña, according to Bill Patzert, a retired climate scientist at NASA’s Jet Propulsion Laboratory in Pasadena. The so-called “diva of drought” remains doggedly in place.

In 2002, Patzert predicted a decades-long drought for California due to changes in the Pacific Decadal Oscillation (PDO) and global warming, which he now calls global heating.

“We’ve been in a drought since 2000, with some wet years (2005, 2010, 2011 and 2017) in Central California,” Patzert told me. “The wax and wane of wet years have given many a false sense of security,” he added. “However, California has entered ‘a new normal’ of significantly more dry years resulting in lower lake levels, less groundwater, depleted aquifers and skimpier Sierra Nevada snowpack.” Patzert predicts the condition will continue for much of California, which is not reassuring. He believes the reemergence of the large-scale PDO pattern shows much more than an isolated La Niña occurring in the Pacific Ocean. “This multiyear Pacific Decadal Oscillation ‘cool’ trend can intensify La Niña or diminish El Niño impacts around the Pacific basin,” Patzert explained.

His observation on how the cool phase of the PDO is producing below-average precipitation seems to be verified by the ongoing drought raging throughout the western United States. Overall, La Niña acts as a gigantic air conditioner for much of the world. When we transition back to an El Niño condition, Central Coast temperatures will likely rise at a higher rate. The warmest seawater temperatures recorded along the Central Coast occurred during strong El Niño events. In 1983, the seawater temperatures along the Pecho Coast reached 66.65 degrees Fahrenheit in 1983, followed by 66.72 set in 1997. In October 2015, seawater temperature reached 67.58 degrees.

Pacific Gas and Electric Co.'s new Climate Strategy Report outlines targets and milestones on the path to net zero emissions. The report is available at www.pge.com/climate.