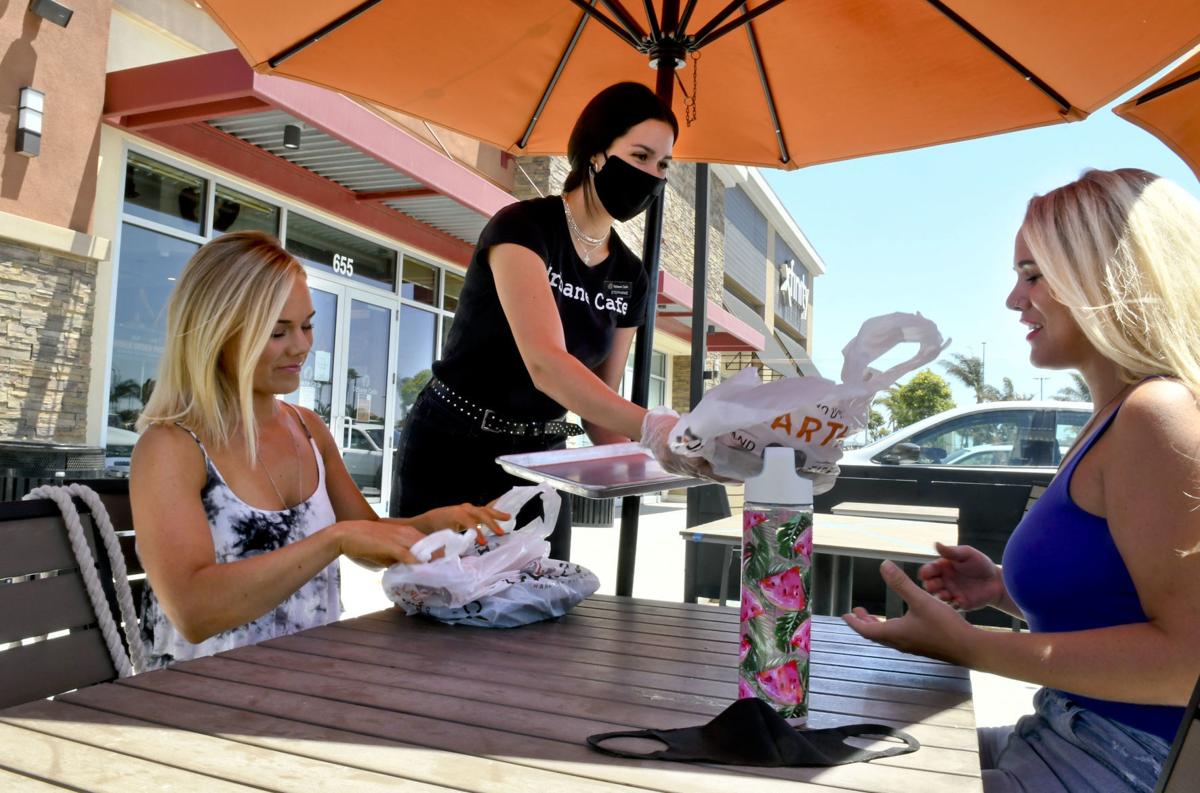 Urbane Cafe server brings Christina Rundquist, right, and Lauren Rundquist their lunches out on the patio Friday at the East Betteravia Road restaurant in Santa Maria. Because of public health restrictions, half the tables are closed and customers aren't allowed inside except to order. Meals are packaged as to-go orders. 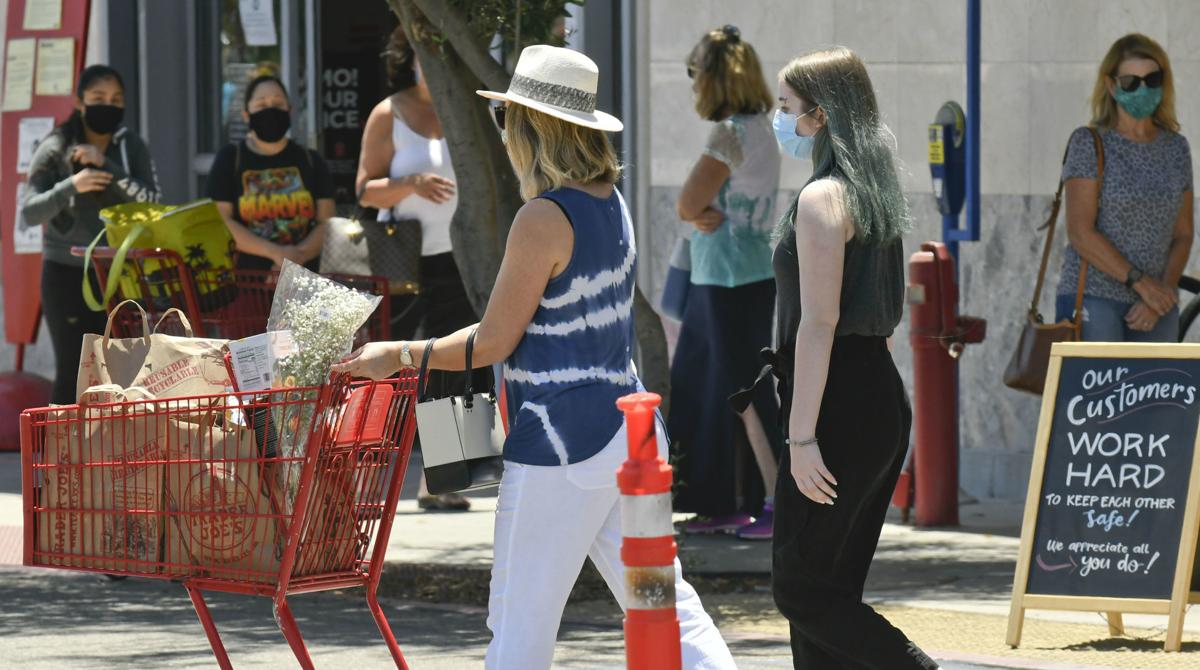 Customers leave Trader Joe's in Santa Maria as others socially distance while waiting to enter the grocery store Friday.

After Santa Maria code enforcement officials were directed by county health officials to increase enforcement against health code violations in the city, code officers have said most businesses and individuals have been compliant after being contacted.

Do-Reynoso urged the city to use its authorization under the county Health and Safety Code to enforce local health orders, asking for further support from the city in addition to the county's educational resources.

On Friday, Do-Reynoso clarified these strategies can include cease-and-desist letters to businesses with repeated violations, or continued monitoring to ensure compliance.

Santa Maria has led the county in COVID-19 cases for two months, with a total of 1,628 confirmed as of Friday and data showing disproportionately high rates among Latino residents compared to other parts of the county.

"The cases in Santa Maria continue to rise. If we look at, 'what can we do better,' it's adhering to social distancing, adhering to mask wearing and the diligent practice of hand washing. If we could get support ... we have pushed out the education and pushed it out in numerous and creative ways," Do-Reynoso said.

City Attorney and Code Enforcement Officer Thomas Watson has defended the hard work of his staff in response to critique from county officials, explaining his office has responded to each complaint and provided education to individuals and businesses.

So far the city has not issued any citations for health violations, since the majority of those the office has contacted have complied, whether in regard to promoting social distancing, enforcing mask wearing or controlling the flow of customers, Watson said.

"We have not had, since our investigations in Santa Maria, what I would call egregious violators, that we felt it necessary to use a heavy enforcement tool," he said. "[My team has] found that when they talk to people, it’s either a lack of information or a lack of resources, and by the time we're done, they've figured out both."

He said this educational form of enforcement is "the Santa Maria way."

Watson said his office has followed up on every violation complaint received thus far, and that over the last 60 days, code officers have responded to 134 violation complaints, with more likely directed to the Santa Maria Police Department.

One barrier to controlling the virus' spread, Watson said, is that the Public Health Department has not been able to identify hot spots where the virus is spreading that the city can then focus on.

"It’s diffused through the community, but if there are hot spots then obviously we have an interest in enforcing. We’re willing to enforce as necessary, but Public Health so far has not shown the necessity of doing that," he said.

Watson said he was not aware of other agencies, including the District Attorney's Office and Sheriff's Office, issuing citations or using "heavy-handed" enforcement themselves in regard to health code violations.

While both agencies have taking punitive action against violators, the instances are few, and reserved for major violations.

Chief Deputy District Attorney John Savrnoch said their office has so far charged four individuals for health code violations, with all four charged for breaking quarantine after being confirmed for the virus. No complaints have been brought to his office regarding large gatherings, lack of mask wearing or violations by a business.

"Most are complying, but even if they aren’t, it wouldn’t result in criminal case," he said. "I don’t believe there is any responsible law enforcement agency in the county that would cite someone for not wearing a mask."

The Santa Barbara County Sheriff's Office has made three arrests and issued four citations for health code violations, according to Public Information Officer Raquel Zick. Two complaints were also forwarded on to the District Attorney's Office, she said.

However, these kinds of enforcement are typically a last resort, Zick said.

"The preferred outcome is gaining voluntary compliance, so these numbers represent the times when subjects made it overwhelmingly evident that they would not comply," Zick said.

Urbane Cafe server brings Christina Rundquist, right, and Lauren Rundquist their lunches out on the patio Friday at the East Betteravia Road restaurant in Santa Maria. Because of public health restrictions, half the tables are closed and customers aren't allowed inside except to order. Meals are packaged as to-go orders.

Customers leave Trader Joe's in Santa Maria as others socially distance while waiting to enter the grocery store Friday.