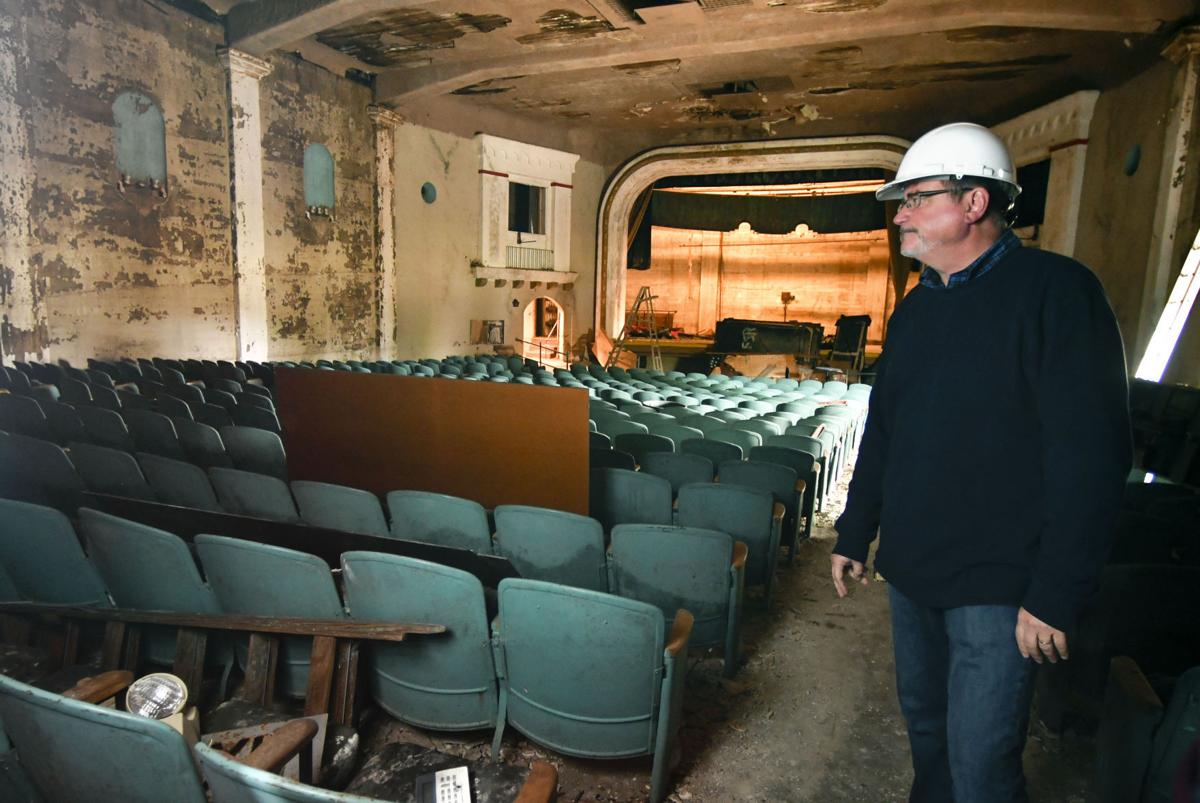 Mark Herrier, Lompoc Theatre Project president, looks at the interior of the building on Friday. The nonprofit has made progress on renovating the facility. 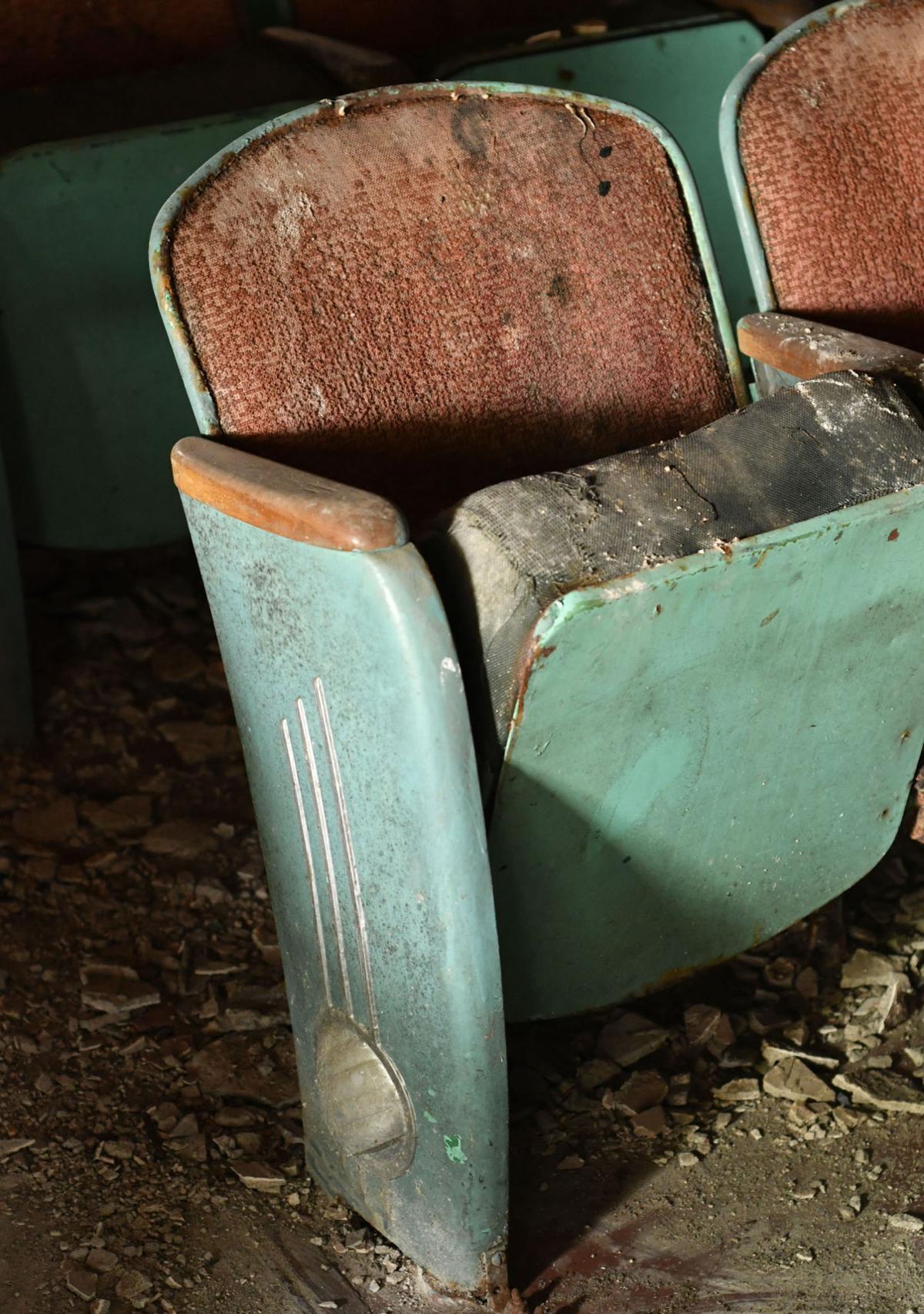 The seats in the Lompoc Theatre will be replaced by new chairs with similar styles, according to officials. 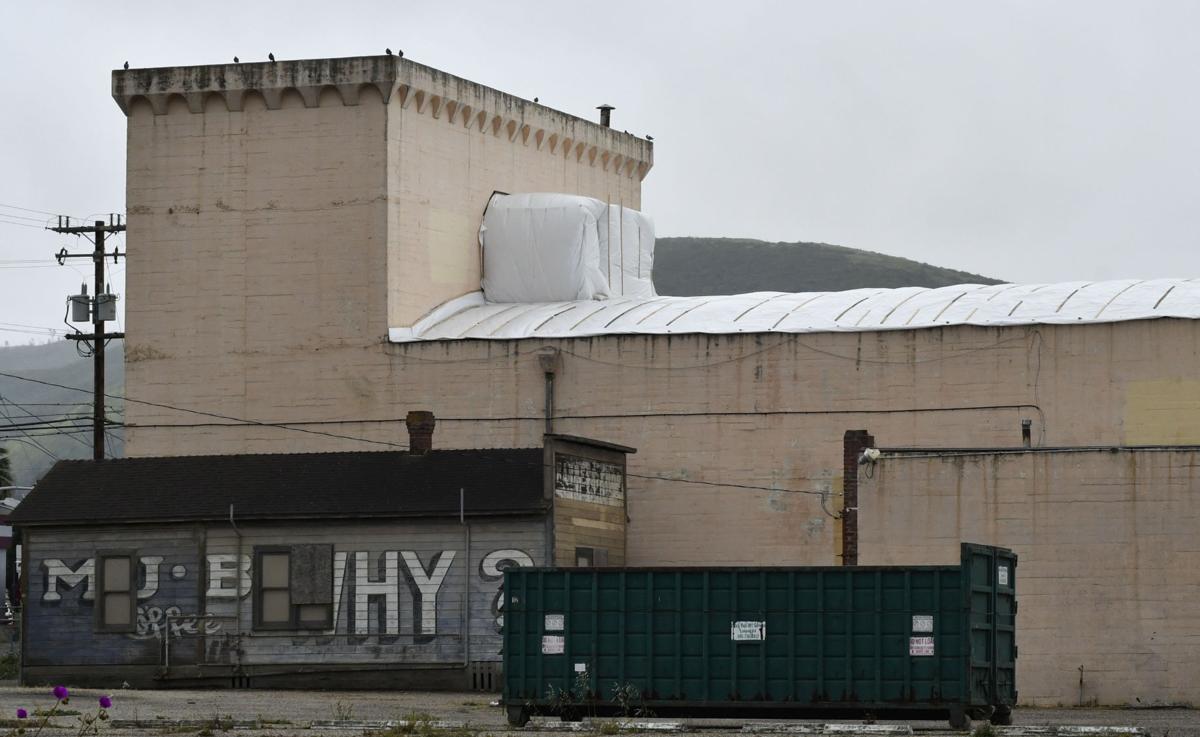 The Lompoc Theatre Project has temporarily sealed the leaking roof with a specialized tarp. 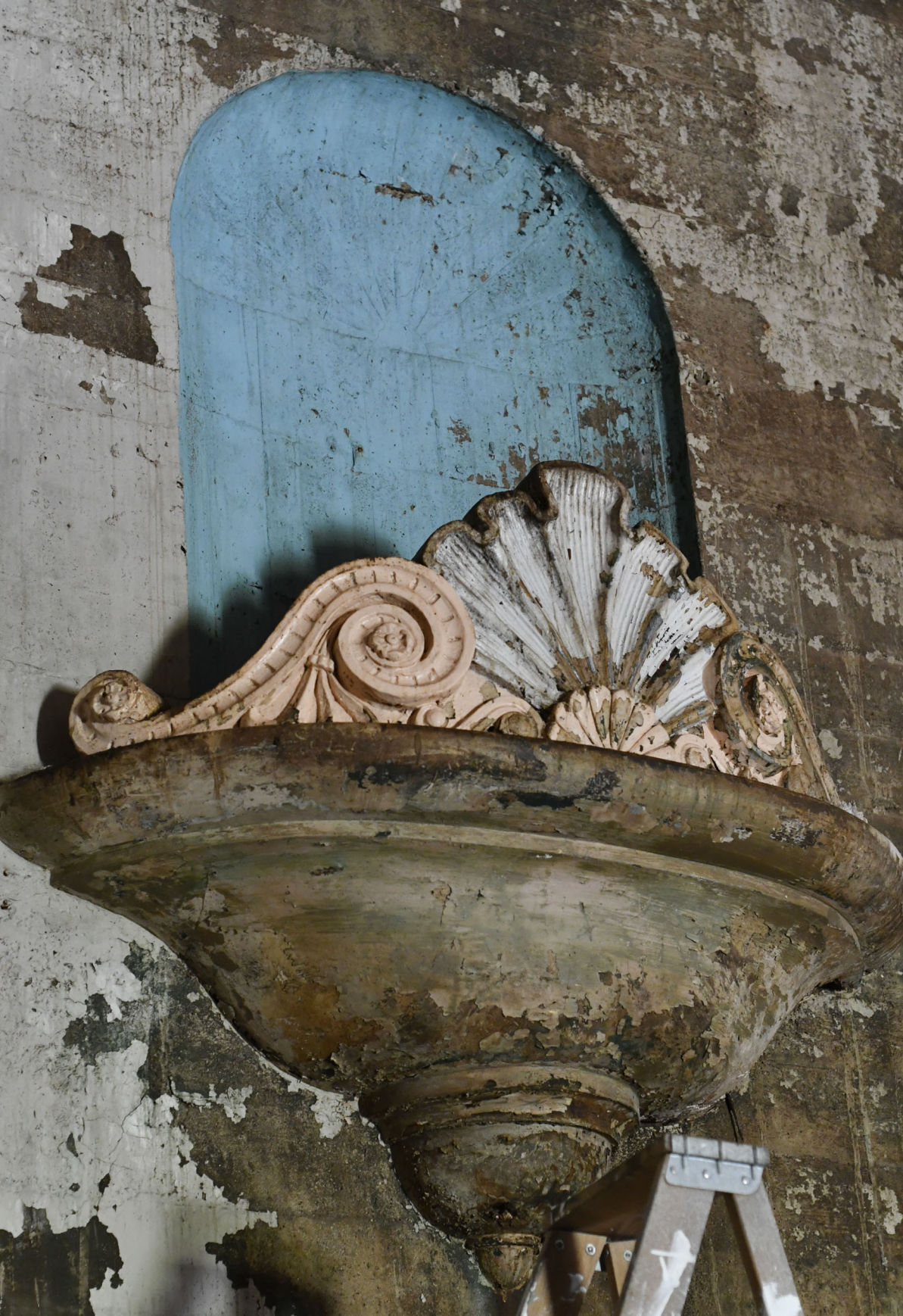 One of the remaining wall sconces is intact in the Lompoc Theatre. 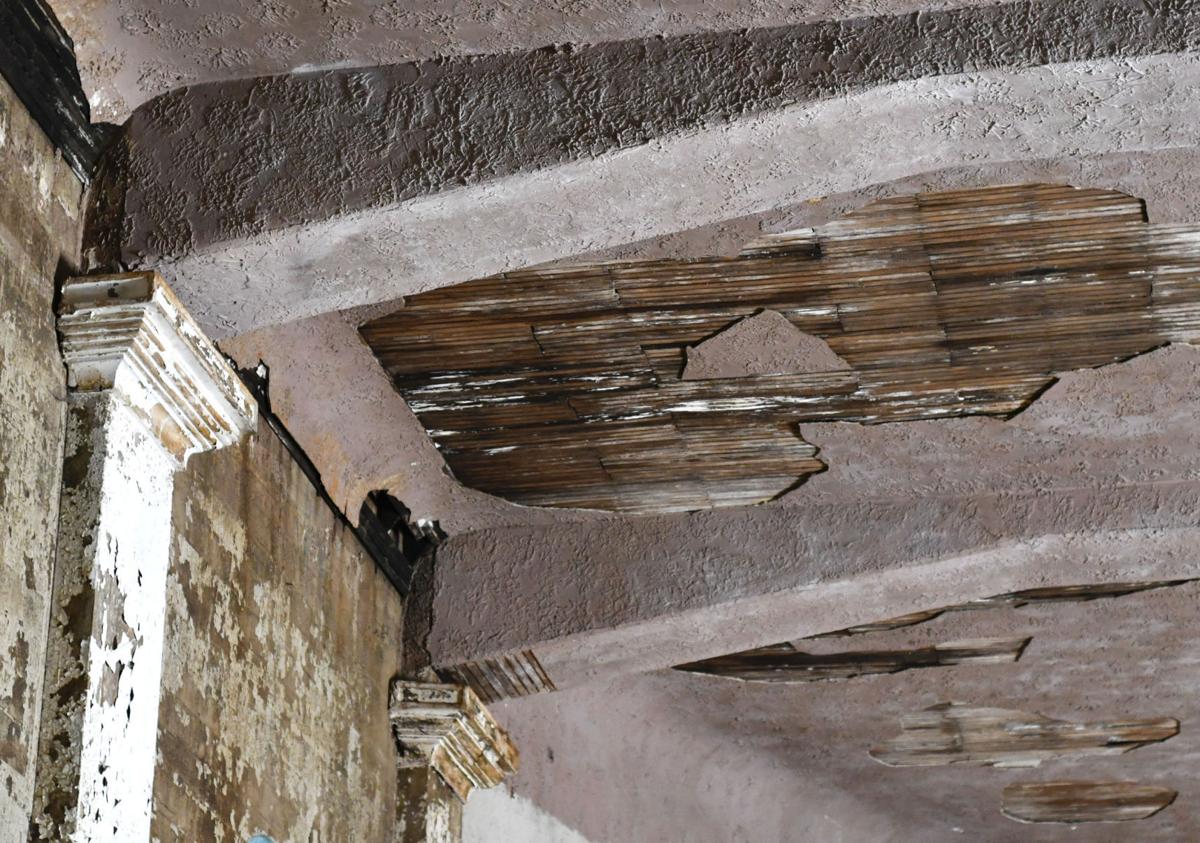 Plaster has fallen from the ceiling in the Lompoc Theatre, but a new tarp on the roof is expected to slow the decay.

It was three years ago that actor/director Mark Herrier, a Lompoc native, got involved in the effort to restore the dilapidated downtown Lompoc Theatre.

As president of the Lompoc Theatre Project (LTP), a nonprofit organization that is undertaking the tall task of remodeling the shuttered theater, perhaps no one has had a better look at the ins and outs of the nearly 90-year-old building. As he stood Friday in the structure’s main auditorium — surrounded by moldy chairs, piles of debris, and while wearing a hard hat to protect against a crumbling ceiling — Herrier didn’t mince words in his assessment.

“It’s a lot worse than when we started, and it was in pretty bad shape then,” he said.

Still, Herrier and the other members of the LTP have plenty of reason for excitement.

It has been about 15 months since the LTP officially took ownership of the theater in January 2016 and the group has been steadily working since then — with a goal of being able to bring community members into the theater next month during a celebration of the building’s 90th birthday.

“We have done quite a lot,” Herrier said as he reflected on the past 15 months.

Perhaps most visible to the public is a large white tarp covering the main auditorium's roof. The tarp was installed this year to prevent rain from leaking into the building and causing further damage. With the waterproof tarp, the building now is protected from the elements “for the first time in about a decade,” according to LTP board member Carol Benham.

While the rain has been kept out, workers have been back inside the building for the first time in decades.

Professionals were brought in to test and assess the building’s structural integrity and any biohazards, such as mold, that have built up in inside. This led to the removal of pigeons — humanely, according to the LTP — that had been living in the building and leaving behind toxic layers of excrement, and the sealing of re-entry points on the roof to prevent the birds’ return.

It also led to asbestos abatement work in the front lobby and auditorium that since has resulted in the theater being certified as asbestos-free.

The theater’s marquee also was stabilized and repaired. Caltrans, the state’s transportation department, recently signed off on the work and the LTP was able to remove the warning signs that had blocked the sidewalk under the marquee since 2013.

Additionally, contractor David Ramsey, of Lompoc, was hired in February as the LTP’s general manager to help guide the restoration process. Ramsey’s contracting experience ranges from remodels of homes in the Santa Barbara area, as well as restaurants and hotels, including Root 246 in Solvang and the Bacara Resort in Goleta.

The LTP estimates that its restoration costs will total about $6 million. The group has sought out donations and received pro-bono work from local businesses to help with the repairs so far. One of the largest donations the organization has received was a 2016 gift from Julia Louis-Dreyfus and her husband Brad Hall, both of whom act and direct.

Herrier estimated that a third of that total cost — or about $2 million — could come from tax credits if the building is ultimately listed on the National Register of Historic Places. Currently, the theater is in the course of applying for that designation, and is eligible for certain protections during that process.

“We’ve hired people to guide us through that process so we don’t make any mistakes and lose that (eligibility) because it’s very important,” Herrier said.

In order to maintain that tie to history, Herrier said the LTP aims to have the theater looking just as it did on its original opening night in 1927. To that end, some end-caps on the theater’s seats — which were added during a remodel in the 1950s — will be saved and replicated, original paint will be matched wherever possible, and workers are saving what they can of the building’s sconces for possible replication.

“It was a jewel when it was built,” Herrier said. “And we will make it a jewel again.”

Up next for the LTP is to raise about $600,000 to repair the building’s roof and attach the steel support beams to the concrete walls to prevent further weather damage.

Herrier doesn’t shy away from the fact that the LTP and its efforts are the subject of a lot of skepticism within the community. The LTP is the fourth organization to attempt a remodel of the Lompoc Theatre, and some within the community are expecting another failure.

“I can’t say they’re wrong in that thought because their hearts have been broken,” Herrier said of the public apprehension. “There have been at least three ribbon-cutting ceremonies at this theater, to the point where we aren’t going to be cutting any ribbons until there’s a brand new door and a live act inside.

“Then maybe we’ll put a ribbon [out] that day,” he added with a laugh.

In order to re-engage with the community, the LTP plans to host a birthday party/fundraiser for the building May 27, which will be the 90th anniversary of its grand opening.

“We’re going to have a parking lot party for the town,” Herrier said, noting that all money raised — unlike with previous attempts from other organizations — will actually be put into the restoration project. “We’ll have music and food and vendors — it’ll be a lovely party.

“When that happens, God willing, all of this (auditorium) will be cleared out, all of this will be clean and it will be able to be viewed safely for the first time in a long time,” he added. “I think the scope of that … will be the straw that finally the community will realize that this time it’s real.”

Leading up to that celebration, the LTP plans to sandblast all of the interior walls to remove any remaining mold and clear out the seats, almost all of which are damaged beyond repair.

During the cleanup thus far, Herrier said that some “treasures” have been discovered. One of the more historic discoveries is paperwork and other materials related to the Lompoc Theatre being one of the charter theaters for Disney’s original Mickey Mouse Club in 1931.

“We have documentation and artwork from that time, so that’s really exciting,” Herrier said.

“It’s pretty amazing,” he later added. “There’s a lot of history in this theater.”

As Herrier stood in the dark, musty auditorium in early April, he pointed to several areas and described what could be if the LTP’s plans come to fruition: a new dressing room and greenroom, an open-air lobby, a detached rehearsal and event space.

He noted that the LTP has shown enough progress to be eligible for grants that it previously wasn’t, but he said the project will still come down to private donors and the sale of things like naming rights.

It’s an opportunity for “individuals to step forward to leave a legacy for their family for this town,” he said. “That will be the thing that will make this happen.”

Herrier said he’s hopeful the theater can be reopened in less than eight years — a timeline he said is the average for projects like this — but he noted that it will take some time. No matter what, he said the members of the LTP are “undeterred and very stubborn” and will take on whatever obstacle they face.

“It will be, literally, the cultural and event center (of Lompoc),” Herrier said of the Lompoc Theatre.

“It’ll be special,” he added. “Lompoc will have not seen anything like it.”

Julia Louis-Dreyfus and her husband, Brad Hall, have made the first major donation to the Lompoc Theatre Project, kicking off the nonprofit’s …

Efforts are underway to restore the dilapidated downtown Lompoc Theatre

A Lompoc couple joined in marriage at a historic city landmark this past weekend, and in doing so made some local history of its own.

Steve and Caryn Arrowood, owners of Montemar Wines, recently presented a $4,400 check to the Lompoc Theatre Project, a nonprofit organization with a mission to restore and reopen the old downtown Lompoc Theatre.

Mark Herrier, Lompoc Theatre Project president, looks at the interior of the building on Friday. The nonprofit has made progress on renovating the facility.

The seats in the Lompoc Theatre will be replaced by new chairs with similar styles, according to officials.

The Lompoc Theatre Project has temporarily sealed the leaking roof with a specialized tarp.

One of the remaining wall sconces is intact in the Lompoc Theatre.

Plaster has fallen from the ceiling in the Lompoc Theatre, but a new tarp on the roof is expected to slow the decay.