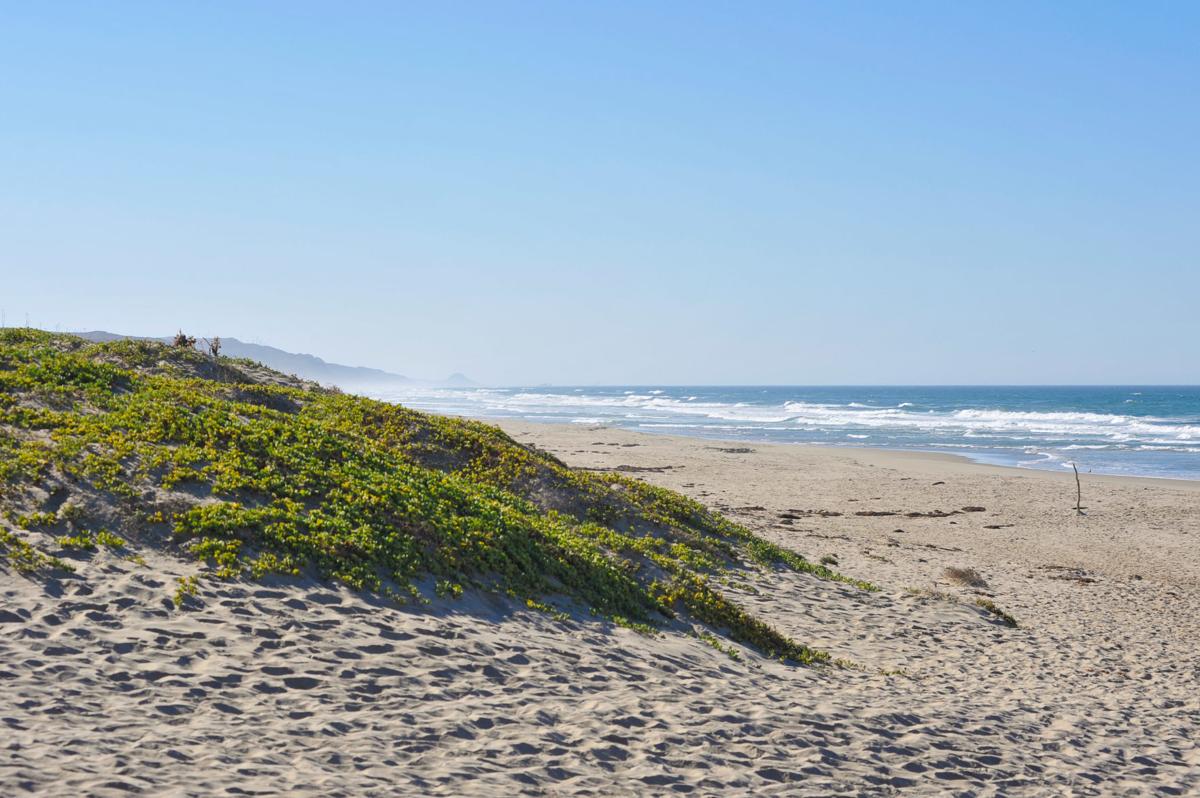 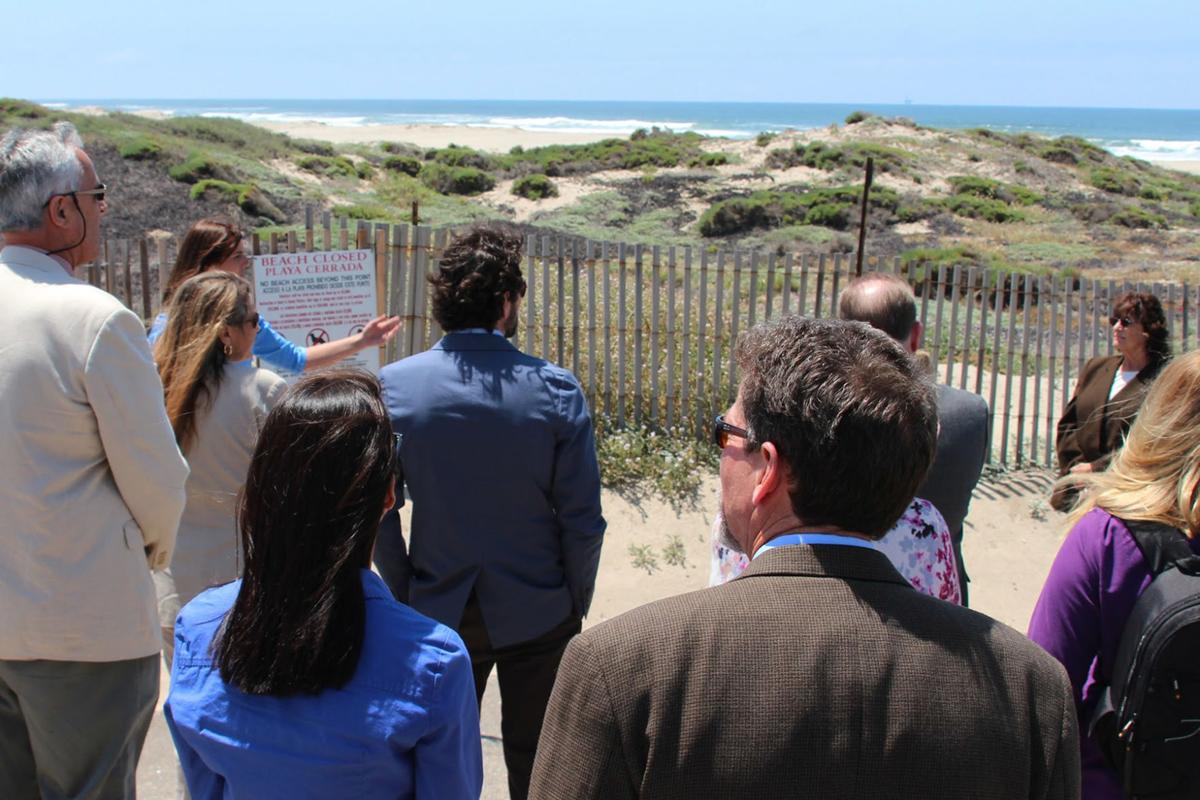 Meeting of city of Lompoc, Vandenberg Air Force Base, U.S. Fish and Wildlife Services, and the California Coastal Commission at Surf Beach on July 26.

VANDENBERG AIR FORCE BASE — This year, many Californians will be able to relive the nostalgia of sun, salt, and sand — with the addition of the latest beach fashion: a medical mask. Travel restrictions, differing state policies, and overall uncertainty might prevent out-of-state visitors from enjoying the beach, but the easy access to miles of coastline currently remains intact for most of the sunshine state.

Access to the coast and all its resources has long been guaranteed in California thanks to the California Coastal Act of 1976. A remarkable display of community coming together to fight for public access to all of California’s beaches, the Coastal Act protects the coast from private development and preserves the ocean as something essential to the life of every Californian.

As Californians count their blessings, those in the small community of Lompoc, too, have cause for celebration this year. 2020 marks the first year that residents of the city of Lompoc will be able to enjoy their local Surf Beach (socially distant, of course) without fearing the summer beach closures of the past.

The closest beach to Lompoc, within half an hour drive, Surf Beach is the hub of coastal recreation for Lompoc residents. With the establishment of Camp Cooke in 1941 which became Vandenberg Air Force Base in 1958, Surf Beach became federal land. Recognizing the importance of the beach to the community, VAFB agreed to keep the beach open to the public, but was still mandated to comply with federal regulations. These regulations included the Endangered Species Act (ESA), which ensures the protection of species listed as threatened or endangered. One species in particular, a small, white shorebird, thus became the center of controversy for the last 25 years at Surf Beach: The Western snowy plover.

The Western snowy plover once numbered in the thousands, but was listed under the ESA as a threatened species in 1993. Although snowy plovers are often mistaken for their not-endangered sanderling doppelganger which covers the beach in flocks, plovers have actually declined in population due to development and beach erosion. Along the western coast from California to Washington there are protected nesting sites, including Surf Beach.

But what makes Surf Beach so special to begin with? Why not protect snowy plovers elsewhere along the California Coast? Jessica Nielson, conservation specialist at Coal Oil Point Reserve, and Dan Robinette, senior biologist at Point Blue Conservation Science, offer an explanation.

“You go to a beach in Los Angeles or San Diego that’s crowded, developed, and has beach grooming and you may only see crows and seagulls. And then you go to Surf Beach or Coal Oil Point Reserve and you’re going to see a diversity of birds and other species that you won’t find at beaches that are less healthy," Nielson said. Robinette added, at Surf Beach “we have, for the most part, natural dunes.” These rare, coastal dunes, shielded from large human disturbances are, thus, what snowy plover birds need to lay their eggs and raise their hatchlings.

In order to comply with the ESA and maintain some degree of recreational access, Vandenberg Air Force Base enacted a beach policy in 1993. This policy restricted sections of Surf Beach while keeping one half mile open for residents to enjoy the beach.

Per an agreement with the USFWS, this access could be maintained as long as no more than 50 trespass violations were recorded during the summer nesting season. If that occurred, the entire beach would be closed to the public for the remainder of the season. These full beach closures occurred almost every summer between 2012 through 2018, meaning that residents of Lompoc have had a harder time accessing their ocean ties than most Californians.

However, in a way that truly embodies the spirit of those Californians who banded together to pass the Coastal Act 44 years ago, the community of Lompoc was able to organize to successfully modify the beach closure policy in 2019. Surf Beach will not fully close at 50 violations, while the remaining restrictions remain in place allowing for access to one half mile of beach year round.

Led by the City Council and backed by Lompoc Mayor Jenelle Osborne, residents of Lompoc were able to make their voices heard. Due to their tenacity and passion for Surf Beach, these residents spurred a landmark meeting of various governmental agencies.

On July 26, officials from the city of Lompoc, Vandenberg Air Force Base, U.S. Fish and Wildlife Service, Santa Barbara County Parks and Recreation Department, California Department of Fish and Wildlife, staffers from Rep. Salud Carbajal’s office, and the California Coastal Commission gathered on Surf Beach to celebrate a new beginning.

“The attendance from the City, the County, Vandenberg Air Force Base, and the U.S. Fish and Wildlife Service was very impressive. It showed that everyone wanted to pull together and figure out a good solution.” — Larry Simon, California Coastal Commission

Getting government agencies in the same room to talk is a challenge in itself; the community of Lompoc deserves major recognition for accomplishing that on top of ensuring that their voices became integral to new decision-making.

The decision to remove the violation limit, ensuring a portion of Surf remains open to recreation during the nesting season, is historic for another reason: It may have been the first step in remedying an issue of environmental justice. Compared to other areas in Santa Barbara County, Lompoc has a higher percentage of low-income and minority communities. This difference in demographics has long exacerbated the Surf Beach controversy. Residents have wondered why more affluent communities of South County don’t see the same kinds of beach closures that those in North County do. And while this largely has to do with the more stringent federal regulations that govern Surf Beach on federal property, it doesn’t dismiss the issue of inequitable access.

After a hard fight, residents of Lompoc can celebrate this summer as the year they can finally enjoy the coast without fear of Surf Beach closing.

Although closure of Surf Beach will no longer occur due to the number of violations, visitors should still be mindful of existing restrictions on dogs and should still not enter marked closed areas. Col. Anthony Mastalir, 30th Space Wing commander, has been committed to keeping access open at Surf Beach for the Lompoc community, citing both the mental and physical benefits of visiting the beach, especially during this time of social isolation and restricted access to other venues. Of course, to ensure closures are not required unrelated to the snowy plover, residents should be mindful of following social distancing guidelines.

As you head over to Surf Beach to let out some of that quarantine-induced energy, be sure to look out for signs of snowy plover nesting. Breeding season is in full swing, so chances of running into some hatchlings, which are objectively pretty adorable, are good.

Now is also a great time to explore some of the other things that make Surf Beach so great, such as its unique coastal dune ecosystems and the new trail that connects Surf Beach to Ocean Park. In a time when there’s not much to celebrate, here’s something residents of Lompoc can celebrate: Surf Beach.

Vandenberg Air Force Base has a critical need for volunteer docents now through the end of September at Surf Beach and Ocean Park.

As a Docent, you will help ensure continued access to Surf Beach by the local community through informing beach visitors of the restrictions that are in place. Docents also help protect the Federally-listed threatened western snowy plover from disturbance during the nesting season and create awareness among beach visitors. Duties can be performed while socially distanced from others.

Docents need to have strong oral communication skills with a diversity of people, be non-confrontational, able to work independently; and be comfortable around people and dogs.

A one hour Western Snowy Plover Docent training will be provided along with t-shirt, hat, and other materials.

With the cancellation this year of major events such as the Santa Maria Valley Strawberry Festival and the Santa Barbara County Fair, COVID-19…

About 30 protesters gathered Saturday for a march through Santa Maria that led to the Immigration and Customs Enforcement (ICE) office, where …

Meeting of city of Lompoc, Vandenberg Air Force Base, U.S. Fish and Wildlife Services, and the California Coastal Commission at Surf Beach on July 26.