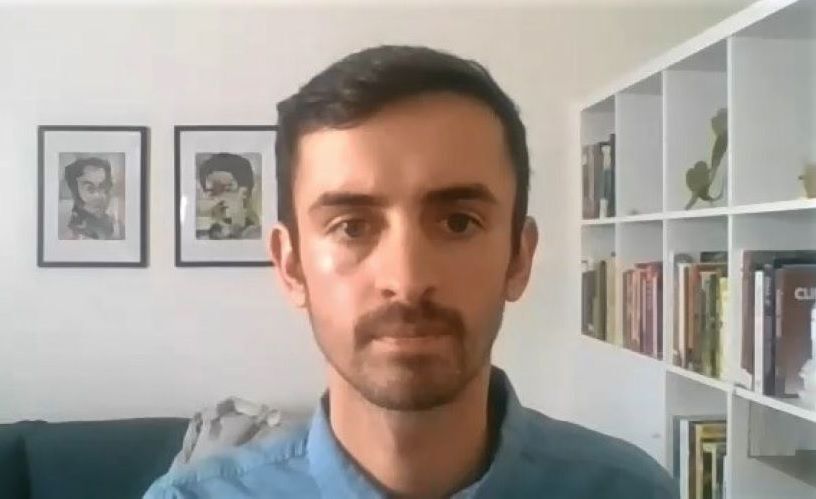 Santa Barbara County contact tracer Nathan Seaford, shown in a screen capture from a Zoom interview, works at home on a computer and cellphone to locate and help those who have tested positive for COVID-19 and the people they've come in contact with. 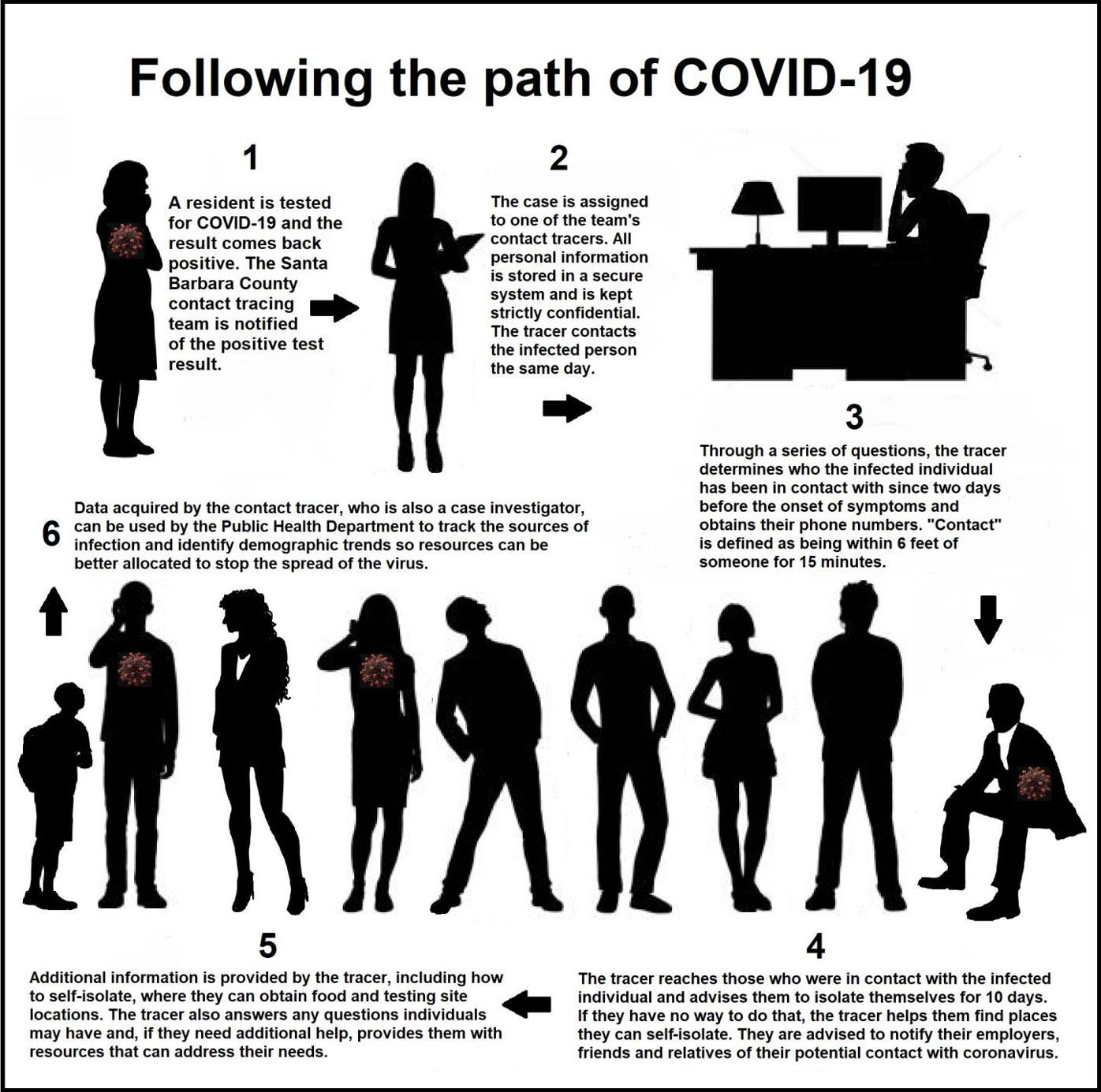 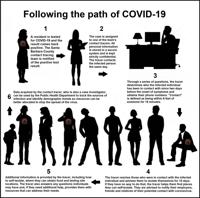 Santa Barbara County's contact tracers begin searching for those who may be infected as soon as a positive COVID-19 test result is received by the Public Health Department. But their goal is more than tracing; it's also educating and providing answers to the questions people have about the disease. 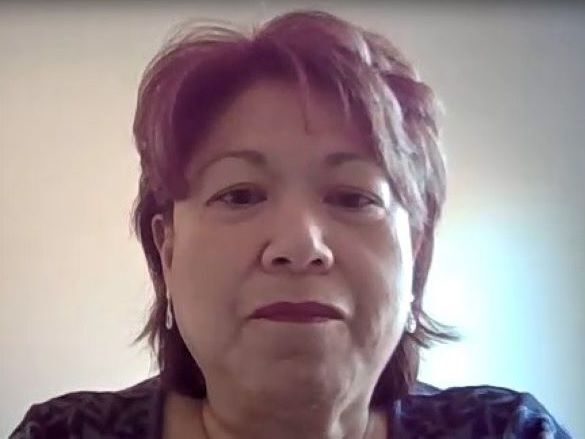 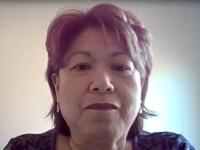 Nancy Silha, supervising nurse in charge of contact tracing for the Santa Barbara County Public Health Department, talks about the tracers and their procedures in this image from a Zoom interview.

Santa Barbara County contact tracer Nathan Seaford, shown in a screen capture from a Zoom interview, works at home on a computer and cellphone to locate and help those who have tested positive for COVID-19 and the people they've come in contact with.

Santa Barbara County's contact tracers begin searching for those who may be infected as soon as a positive COVID-19 test result is received by the Public Health Department. But their goal is more than tracing; it's also educating and providing answers to the questions people have about the disease.

Nancy Silha, supervising nurse in charge of contact tracing for the Santa Barbara County Public Health Department, talks about the tracers and their procedures in this image from a Zoom interview.

A year ago, Nathan Seaford didn’t know much about contact tracing, but he did understand people. Intelligent and easygoing, he was also computer-literate. That made him an ideal candidate for the job of tracking down those who have come in contact with someone infected with the SARS-CoV-2 virus.

“The biggest thing I look for [in an applicant] is how they communicate, how they relate, how they teach,” said Nancy Silha, nursing supervisor in charge of the contact tracing program for the Santa Barbara County Public Health Department. “I give them a scenario and see how they handle it, if they have empathy in their voice.”

So when Seaford applied for the job in August, he was among several people hired by the Public Health Department in its effort to halt the spread of COVID-19, the disease the virus causes.

“A lot of it’s epidemiology,” Seaford said. “You learn about the virus, what the symptoms are, how long it will last. Also, a good portion is on cultural bias, how to interview someone from a different culture.

“There’s a lot of experiential practice,” he added, explaining that meant role-playing, sometimes as the tracer talking to potentially infected people with a variety of attitudes, sometimes being that person with an attitude.

Next came nearly a week of training with the county health department, after which Seaford was supplied with a cellphone and laptop.

“Every county has a different workflow, and you learn what parts of the interview are important to the county,” Seaford explained. “Also how to get on the phone with a person for the first time.”

“There’s a lot of anxiety,” he said. “But once you’re doing it, it’s just like talking to someone on the phone.”

During Seaford’s first month on the job, the county was experiencing about 30 new COVID-19 cases per day. But the state had eased restrictions a couple of months earlier, businesses had opened up and people were out and about. Then case numbers began to increase.

“Right before Thanksgiving, we were getting 60 to 70 [new cases] a day,” Silha said.

The real surge hit with the holiday season, as people socialized more and apparently paid less attention to safety protocols.

That put a strain on the county’s relatively small team of contact tracers — as of February there were 52 — because to be effective, tracing must be done quickly.

When people are tested for COVID-19, either routinely or because they feel sick, all the results go to the state.

But the positive results are reported to the County Public Health Department, which immediately assigns a number of those cases to a tracer like Seaford, who will try to call those people the same day.

“Sometimes we’re the ones to tell them they tested positive,” Seaford said.

He sends a questionnaire by text message to those who can receive them, and their texted responses go right into a secure computer system where Seaford can read them.

But he still must ask a series of 20 to 30 questions in several categories.

“The best way to interview is not to just work through the questions,” Seaford said. “If they know they have the virus, I ask how they’re doing, how they feel. … I let them talk about how they’re feeling. It builds some trust.”

That’s important in getting an individual to open up.

Seaford said that hesitation might be because some people don’t trust the government; they worry about the security of their personal information. Others may be in the country illegally and fear deportation.

But Silha said the Public Health Department isn’t sharing information with federal immigration officials, and all personal data is held on a secure, dedicated system.

“Their information is safe,” Silha said. “They think it’s out there in cyberspace, but it’s not.”

Seaford said during the conversation, he weaves in the questions he has to ask: When did you first feel symptoms? Who have you been in contact with since two days before that? How can I reach those people?

The interview length varies depending on how many questions an individual has and how many people the person had contact with.

“Contact” is defined as being within 6 feet of another person for 15 minutes or more — not those you pass in the supermarket or see at the gas pumps.

Older people generally have fewer contacts, mostly family members. College students’ contacts are usually whoever they’re sharing a house or apartment with. High school students who have been throwing or attending parties can have a dozen contacts or more.

“They’re not able to get ahold of everybody every day,” Silha said, adding tracers will make three attempts before moving on. “Really good contact tracers can do 20 a day. It takes longer when you need to reach another five or six contacts.”

With the list of an individual’s contacts in hand, Seaford begins calling them to warn they may have been exposed to the virus and to quarantine themselves. But he doesn’t go through his list of questions and then call the contacts’ contacts.

“We only go one degree of separation, even if they are sick,” he said. “If I find [a contact] who is sick, I ask them to get tested. We only work off positive test results.”

Contact tracers here have a dual role, since they also serve as case investigators.

“That’s unique to Santa Barbara County,” Seaford said. “I think there are only two or three [counties] that have that.

“So another important part of the interview is to find out about where they might have gotten sick,” he explained. “I ask where they’ve been and who they were with in the 14 days before they had symptoms.”

He also asks about such things as their race and ethnicity, “just to see what communities are impacted the most,” he said.

That helps the Public Health Department focus its messages about safety and target its resources.

But Seaford’s job is more than simply asking questions and recording answers. The people he contacts frequently have a lot of questions themselves, and he has to have the answers.

“[The tracer’s] main role is to educate, to give them guidance, to give them resources, like where to get food and where they can get tested,” Silha said.

Seaford explains how infected and potentially infected individuals should isolate themselves, and if they don’t have a place to self-isolate in their homes, he helps them find a place where they can.

He also answers questions about the virus, using what he learned in his training and about the constant changes in state and county guidelines he receives in weekly updates.

Seaford and Silha both said it’s important for county residents to know contact tracers are only trying to halt the spread of the virus and to help those who are or may be infected.

“All the people [on the tracing team] are there because they care about their community,” Seaford said.