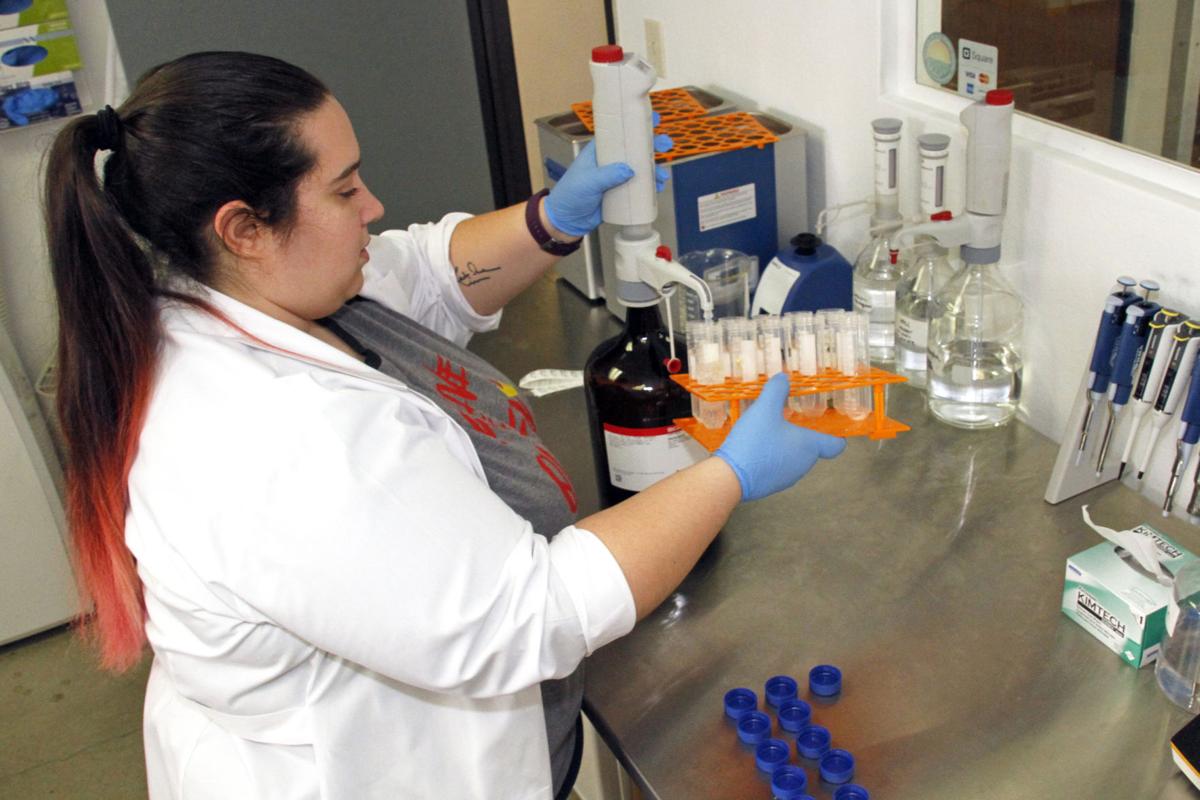 Cannalysis testing lab technician Kathryn Ricker, who has a degree in biochemistry, creates dilutions from several marijuana products, including concentrates and flowers, at the Costa Mesa facility Wednesday. 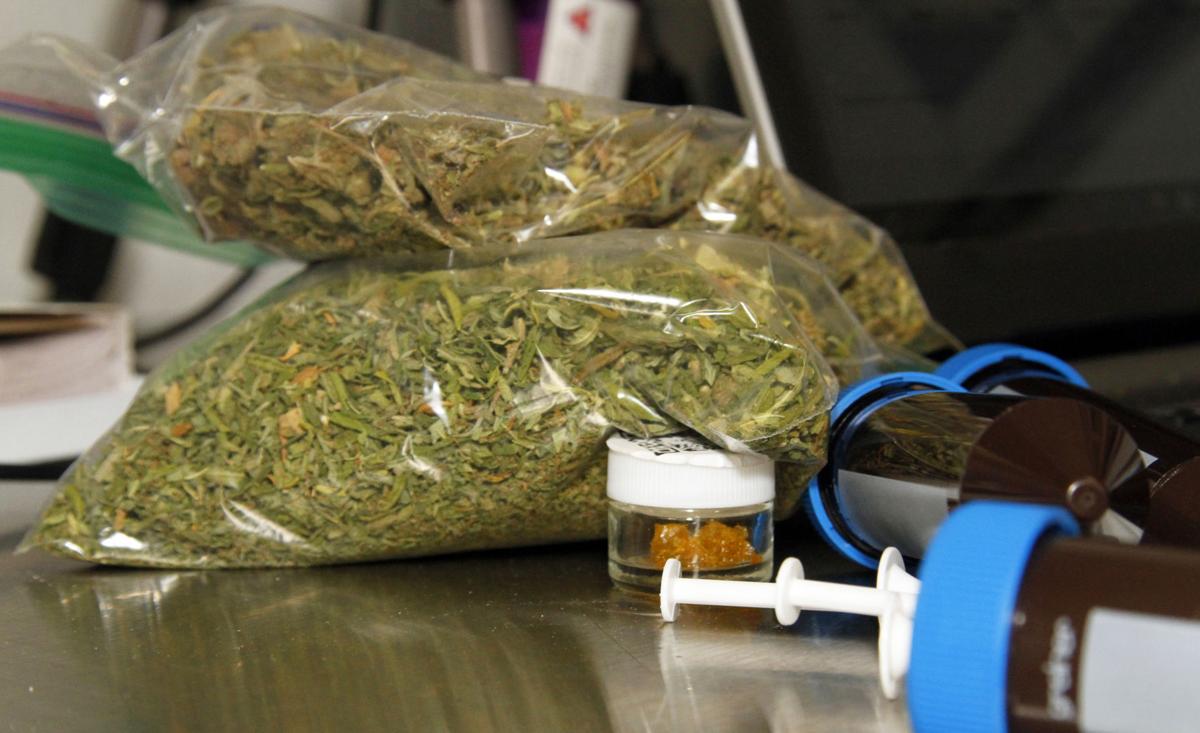 Marijuana products, including trim and concentrates, await testing at the Cannalysis testing facility in Costa Mesa. 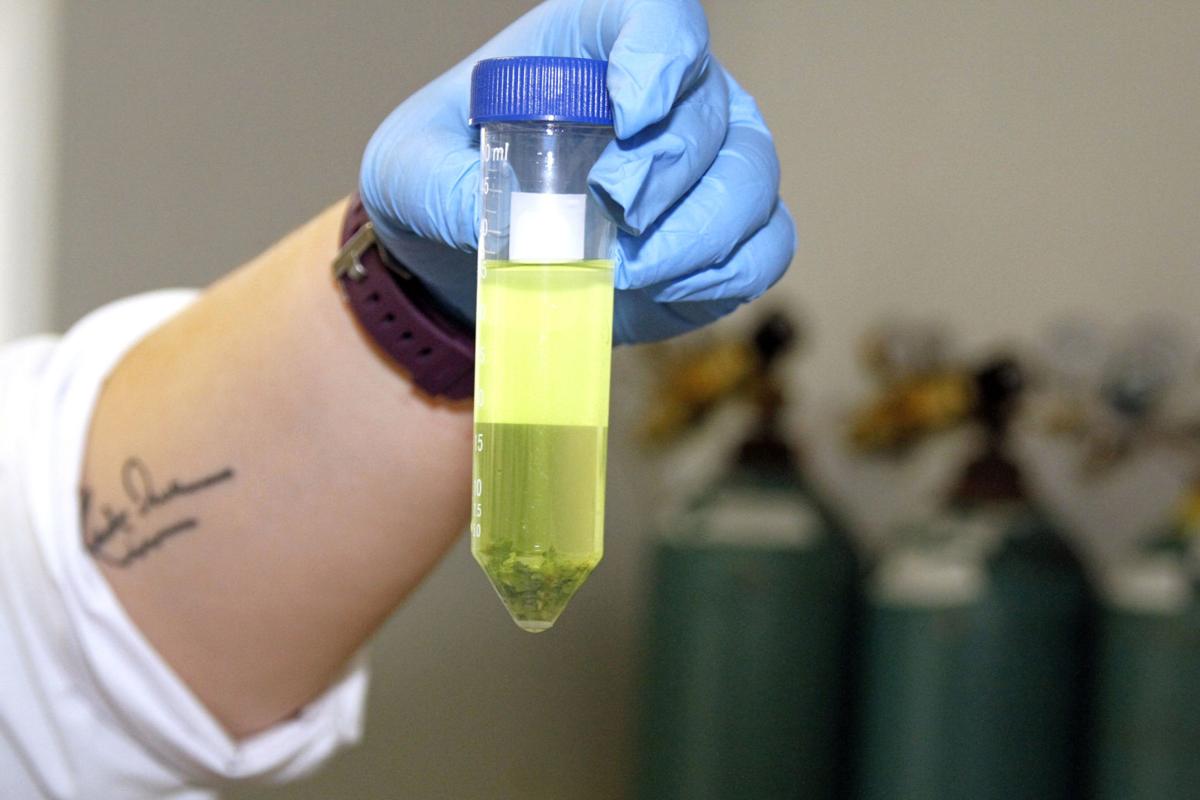 A dilution made from marijuana flowers and methane is prepared Wednesday, to measure potency and presence of pesticides, residual chemicals from processing and microbials like bacteria and mold.

Brian Lannon started Cannalysis in fall 2015 before opening the doors to his Orange County testing lab in March the next year.

"We developed our own software platform that tracks customer samples that come in for testing, and we also allow our customers a unique platform to gather their testing data," said Lannon, who graduated with a bachelor's degree in finance from San Diego State University, and came up with the idea for Cannalysis developing methods that he describes as "more technology-forward than other labs."

"We then push that data through the supply chain, whether it's a weed map, a weed menu, or the state track and trace system, so it makes it so much easier to put the product out in public," he said.

Testers such as Lannon, and Dr. Robert Martin, co-founder and CEO of CW Analytical labs in Oakland and Humboldt County, point to state quality control requirements as stringent, but necessary, as recreational marijuana becomes legal Jan. 1. But they differ in their assessment of the types of testing needed, and the amount of cannabis that to-date, is not up to standard.

"If it were exactly a year ago, December 2016, then yes — 80 percent of pot and 95 percent of pot products would be contaminated,” Martin said. “But people have wised up a lot over the years, and right now, my office sees only about 40 percent of flowers coming in being contaminated.”

What's in a test?

Lannon's lab conducts five types of tests for pot products, including testing for 11 different types of cannabinoids. The lab also tests for heavy metals and mold, and 59 analytes, which are different pesticides, fungicides and plant growth regulators.

"We’re also working to expand to test for 66 chemical residues, to align it with the state’s law," Lannon said. "We didn’t know where California would be on regulations, because they went back and forth, and it takes a long time to develop science methods. We just began with a list that Oregon released for their regulations as a template.”

Lannon said that California has far stricter contamination rules than Oregon or Colorado.

“In California, the requirements for action levels (level of harmful/toxic substance which requires medical surveillance) are twice as strict as Oregon’s,” he said, and back in May when early regulations were released, “they were 20 times more strict than they are now — which renders this scientifically unrealistic to keep up with.”

Lannon said there are always risks for pot manufacturers because residual solvents can be left behind on a plant. There are also risks of myclobutanil, which is the active ingredient in several brands of pesticides, including Eagle 20 which prevents brown patches in plants and certain fruits.

“Myclobutanil kind of runs rampant through the state, but we’re starting to see it taper off now because manufacturers and distributors began figuring out how dangerous it can be,” Lannon said. Mold is also always a risk, especially the fungus aspergillus, which can be fatal if one contracts an illness from it, and it goes untreated.

Lannon said the high risk of harmful chemicals found in pot will always be there, which is why “California is going to be the strictest state for cannabis testing, hands down.”

When the state released emergency pot testing requirements in November, a microbiological section was added that includes four very specific species of mold, including aspergillus.

The microbiological requirements allow for up to a quarter of the product to be covered in mold and still pass the test, according to Lannon.

“Remember, these are just emergency regulations, which are provisional — so by next summer, the state Bureau of Cannabis Control will probably get some more input and maybe change some of the rules,” Lannon said. “Nobody really knows yet.”

“It’s good they’re phasing everything in slowly though,” Lannon said. “From what we see coming to our doors, I’d say that 80 percent of the cannabis plants would fail, and 95 percent of cannabis concentrated products would fail the current testing standards if the regulations went into effect today."

Costly and effective, or just costly

"I think the price of testing may go down before it rises,” Lannon said. “For our lab, testing for most things wouldn’t be too pricey. For example, testing for aspergillus is easy to catch, and it’s so much cheaper to test for, and lessens the burden on the growers by having a less expensive test.

"It’s better for consumers all around because you see a larger breadth and keeping potentially harmful stuff from entering the legal marijuana supply chain.”

Martin, with CW Analytical labs, has biology and botany degrees, and his research primarily focuses on parasitic fungi in products. Martin also worked at Kraft Foods in their chemistry and food product development before joining Dreyer's ice cream as a research and development director in quality assurance.

He became interested in studying cannabis when friends who had cancer started asking him about medicinal marijuana.

"I didn't know, so I started asking questions, doing my own research around the Bay Area," Martin said. "I didn't like the answers I was given — I have a microbiological mind — so that's where I decided to focus on studying cannabis myself."

Martin said that if regulators aren't careful, stringent testing laws will make it financially unfeasible to become licensed and force the cannabis industry “right back into the dark way of doing things.” He added that many of the testing requirements are “based on shoddy research from the past."

"I get it," he said, "agencies had to start somewhere and look to other states to see what they were doing — you have to give them credit for that, but I’m just saying that some of their findings have been incomplete, or unrealistic.”

Unlike Lannon, Martin said rigorous testing requirements for specific mold species like aspergillus will incur costly expenses for patients, customers and even testers, in part, because it's extremely difficult to detect, even with DNA kits. And, he said, much of that testing is unwarranted.

“There’s a huge fear now that cannabis will have awful toxins — I can tell you that in the 100,000 samples I’ve tested, I found none,” said Martin, adding that the state has based regulations purely on “what they read in news and not hard science.”

While it is inexpensive and easy to conduct basic bacterial and fungal testing, it’s not so easy for all labs to look for specific species of fungi, Martin added.

“They’re making us chase after specific contaminants like aspergillus that are rarely even found in pot,” he said.

“I get it — nobody wants a pesticide-ridden cannabis in any form or fashion, and we find that a lot of growers use that stuff so that is a concern, but to look for aspargillus, e-coli and things like that? Most bacteria contamination occurs after harvest but if you have a good handle, you won’t have that problem,” Martin said.

Additionally, Martin said the majority of pot contamination would be similar to food contamination, a result of people not washing their hands, scissors or other cutting tools.

Martin said his lab’s job is to try and make the process as affordable as they can for anyone who wishes to test their products. With the state’s new provisional regulations on testing, it will get extremely costly for labs to keep up with the technology to detect all that the state requires to identify in each plant, he said.

Martin also questioned why the state felt the need to add heavy metals to its list of contaminants, saying “there is evidence out there in science that proves that if heavy metal were to get into the root of a cannabis plant, it won’t progress into the upper tissues.

“If you were to find just slight a trace of heavy metal in tissues, it won’t really affect anyone, but they have us looking for them anyway,” Martin said.

He said that while his lab is financially stable, it could be compromised if forced to buy pricey equipment needed to test for heavy metals.

Testing not all bad

Martin, however, gives “high marks to the state for wanting to be careful,” and said that he hopes the state will try to be as lenient as possible when issuing licenses to applicants and working with cities.

“It's great that everything has to be tested before it goes to a consumer — I just don’t think the testing has to be this restrictive, but I think they’re doing the right thing,” Martin said. “I’m sure the state will try to loosen their grip on some things in the cannabis industry later down the line."

Cannalysis testing lab technician Kathryn Ricker, who has a degree in biochemistry, creates dilutions from several marijuana products, including concentrates and flowers, at the Costa Mesa facility Wednesday.

Marijuana products, including trim and concentrates, await testing at the Cannalysis testing facility in Costa Mesa.

A dilution made from marijuana flowers and methane is prepared Wednesday, to measure potency and presence of pesticides, residual chemicals from processing and microbials like bacteria and mold.