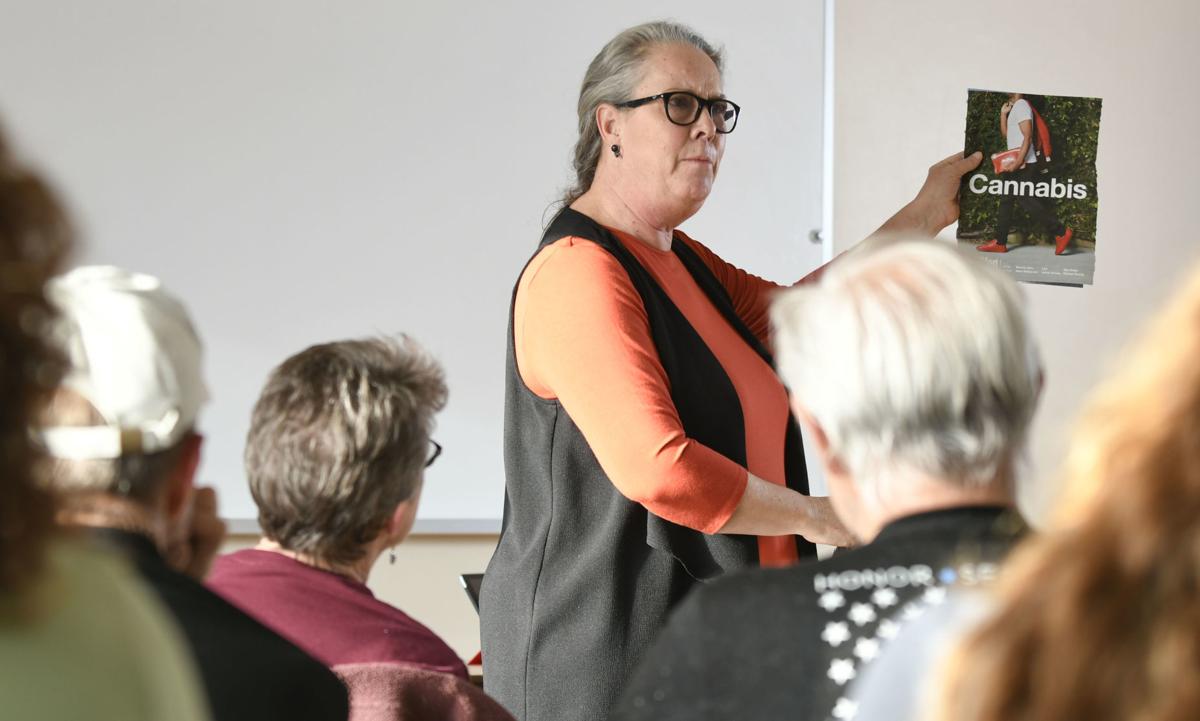 Dulcie Sinn, founder of the Cha Cha Cooking Club, leads a class on home-grown cannabis for medical and recreational adult use on Monday at the Anderson Recreation Center in Lompoc. She is holding an ad that appeared in The New Yorker magazine. 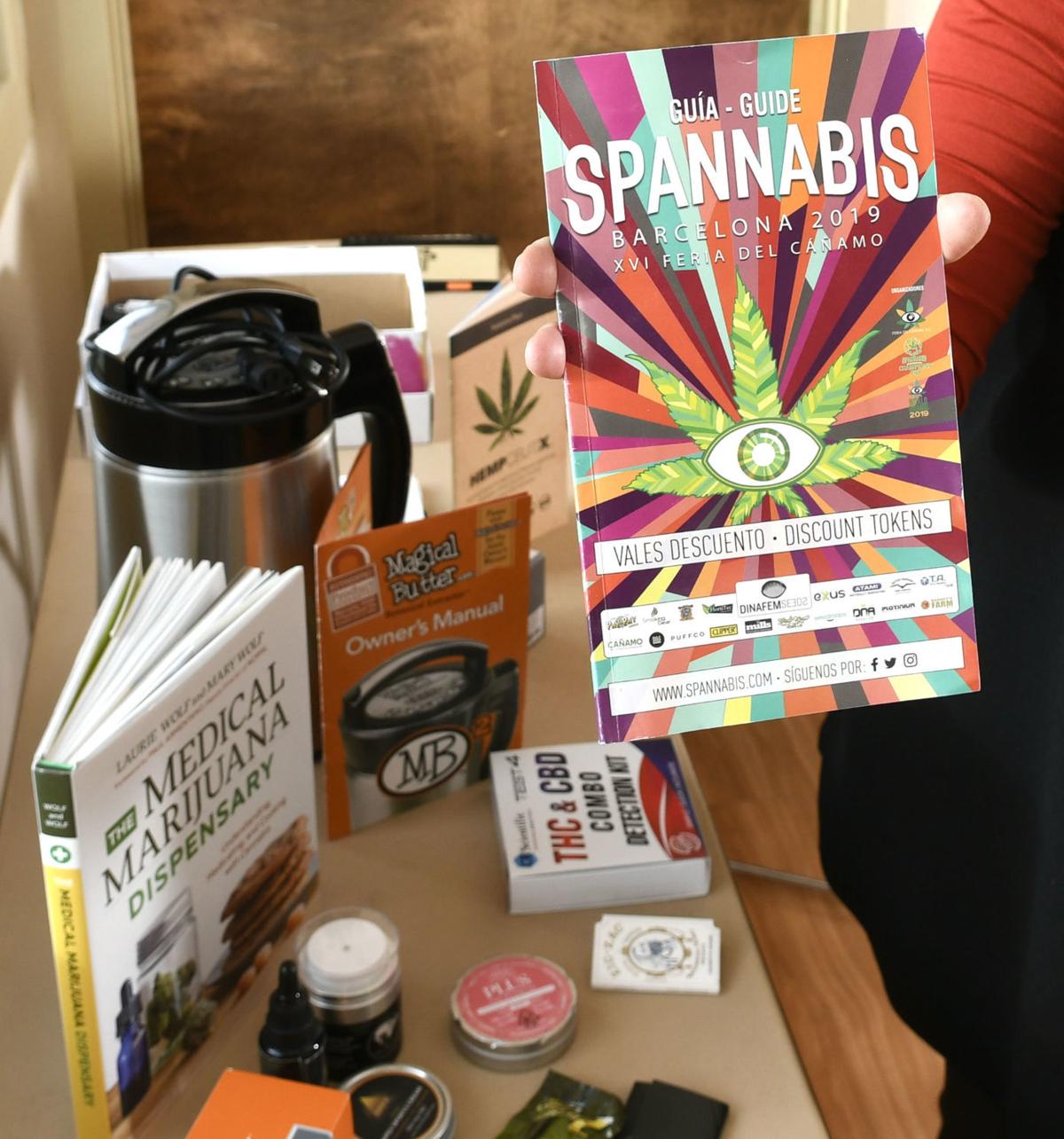 Dulcie Sinn shows reference materials, including a pamphlet on a cannabis festival in Spain, on Monday at the Anderson Recreation Center in Lompoc. 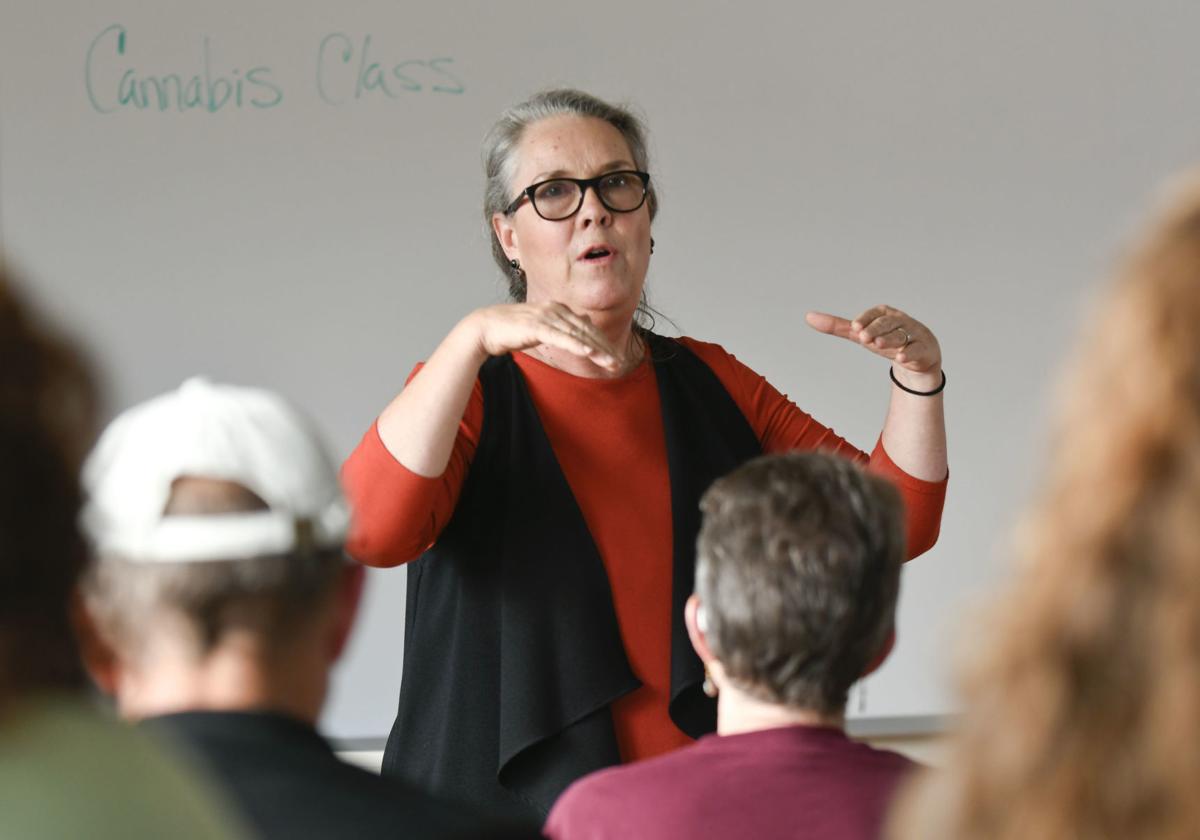 Dulcie Sinn, founder of the Cha Cha Cooking Club, leads a class on home-grown cannabis for medical and recreational adult use on Monday at the Anderson Recreation Center in Lompoc. 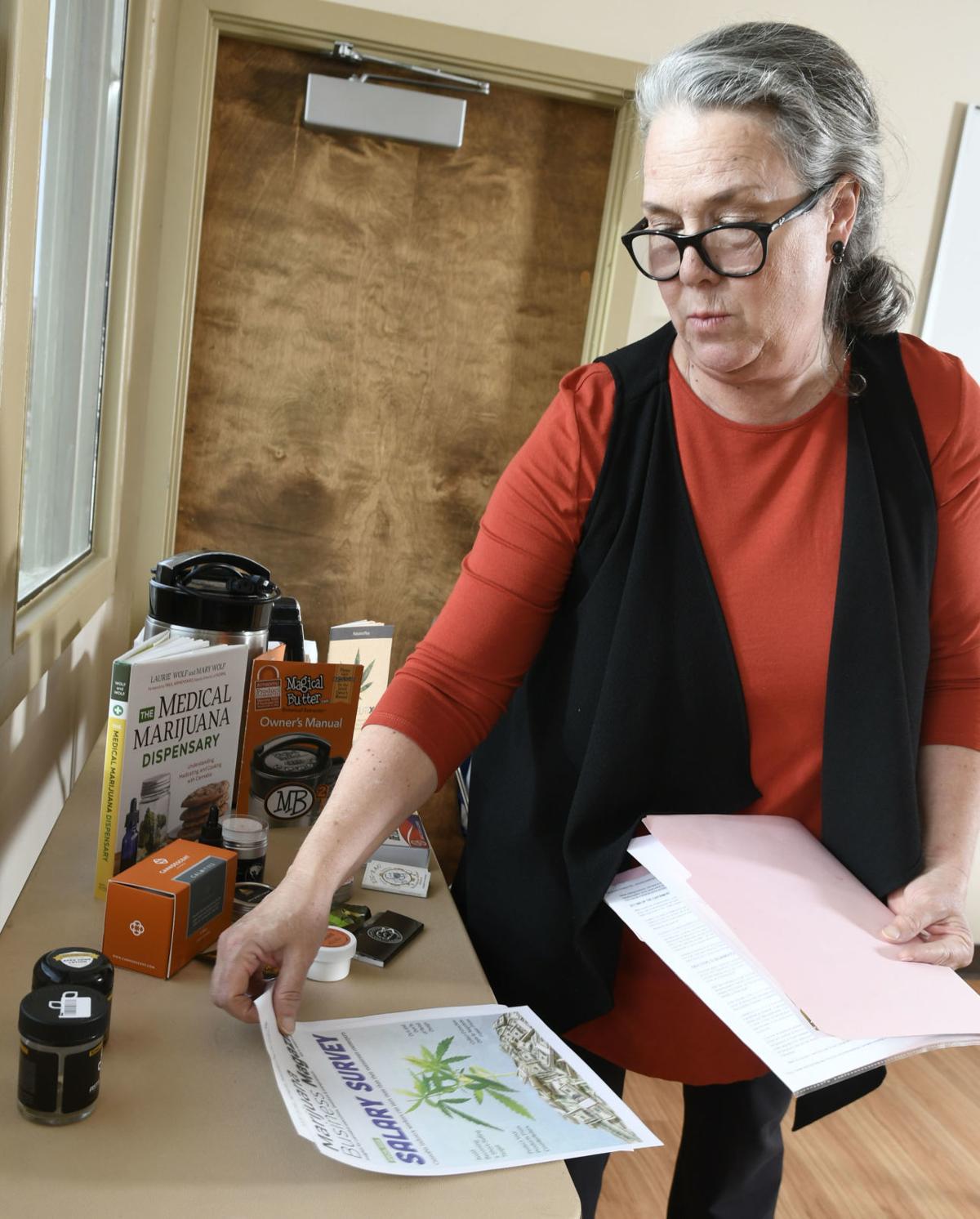 Dulcie Sinn, founder of the Cha Cha Cooking Club, prepares materials for her class on home-grown cannabis for medical and recreational adult use on Monday at the Anderson Recreation Center in Lompoc.

It was after one of her lowest moments — both physically and mentally — that Dulcie Sinn said she was awakened to what she now sees as the many benefits of cannabis.

The Lompoc resident said she was taking prescription medications several years ago for what she described as “terrible pains.” On one particular morning, she said she bent down to retrieve her newspaper in front of her home when the pain became too much. After reaching a second time for the paper, she said she realized that not only was she not recovering but that she was probably getting worse.

“Of course, the dog thought it was great fun as I’m lying there in the wet grass thinking, ‘This is humiliating’ and ‘Please don’t let the neighbor walk by,’” she said. “At that point, I said to my husband, ‘I think you need to look for a younger wife’ … and I really thought that was it. I was so despairing.”

Sinn said it wasn’t until she turned to medical marijuana that her pain subsided and her mindset improved.

She shared that story with a couple dozen other community members Monday evening to kick off a first-of-its-kind class in Lompoc that she hopes will help others learn about cannabis without having to experience the circumstances that brought her to the plant.

Sinn, who founded the Cha Cha Cooking Club in Lompoc nine years ago, led the first of three scheduled introductory cannabis education classes Monday at the Anderson Recreation Center. The two-hour session — which will be followed by similar classes at the same location on May 6 and June 3 — focused on the history of the plant, the legal issues surrounding it, the effects it can have on users, ideas for gardening and ways to use it in recipes for treats and meals.

The tagline for the class is: “It’s legal. Buy it. Grow it. Cook it. Enjoy it. Fearlessly!”

“It’s becoming very mainstream and because Lompoc seems to be allowing people to come in and set up dispensaries and cultivation (operations) and Santa Barbara County has the most permits pending for cultivation for all of California, I just think people need to understand what cannabis is and the lifestyle it is and not be afraid, and know where to go for resources and to ask questions,” Sinn said prior to the start of Monday’s class. “I know that kind of stuff and I am going to step up and talk about it and not be worried about it. It’s legal.”

Lompoc resident Ingrid Bates was among the attendees for the first course. As a nurse, Bates said she was interested in the class, at least in part, for professional reasons.

“Medical marijuana is gaining in popularity and a lot of doctors are using it in different ways, so I wanted to just learn more about it and the history of it and see if there’s things that I don’t know that I could maybe pass on to my patients,” she said.

“The more I learn, the more I can help other people,” she added.

Some of the other class attendees said they preferred to not discuss their motivations publicly, due to fears about what their employers or friends might think. At least one of the attendees traveled from Santa Maria.

Sinn acknowledged during her introduction that it was an “emotional trip” for her to get to the point where she could feel comfortable broaching the topic of cannabis to a roomful of strangers.

“It was not an easy pass in [1996] when the law passed for medical marijuana [in California],” she said. “A lot of people weren’t OK with that because of the mythology and the propaganda that had built up over this plant.”

She said she was involved in PTAs at the schools attended by her now-adult children, and she would often think about the ramifications of being a PTA mom in jail on drug charges.

“I used to joke and tell my kids that at least I’d get to write my book that I always wanted to write,” she said of the prospect of facing jail time.

Now, as a retiree and a firm believer that cannabis has many positive properties, Sinn said she has shed herself of any of those past reservations.

“I was a kid in the ’60s and when I went to college I tried it and whatever, and then I had kids and a career and a life and everything else, and my personal experience with it is I just see a huge benefit for people using cannabis,” she said. “Now that I’m old and nobody is going to drug test me for any job or anything like that, I said, ‘I think I’d like to try doing something with this.’”

On display at Monday’s class, alongside some informational materials, was a framed certificate of completion that Sinn earned after passing a master exam in a program offered by the online Cannabis Training University. The certificate noted that the training covered a wide range of cannabis topics, many of which were discussed during the class.

In addition to information about cannabis itself, the class also touched on ways to discuss the plant with children and teens, and provided practical advice for visiting a dispensary.

While Sinn clearly advocated for cannabis during the class, she acknowledged that it wasn’t for everyone — the same as every other drug or treatment doesn’t work for everyone. Still, she said she believes most people could be aided by it.

Sinn said she’d like to one day create a hybrid class with her Cha Cha Cooking Club that focuses fully on cannabis recipes and edibles, particularly with home-grown plants.

“My whole approach with the Cha Cha Cooking Club has to do with home cooking — people getting around the kitchen table and connecting over good healthy food and supporting each other,” she said. “I think the kitchen is almost always the heart of the home.

“The dispensaries that are opening here and around the state are very expensive,” she added. “If you can grow tomatoes, you can grow this.”

Karinda Koscielniak said she attended the class to become “more aware” of the issues surrounding cannabis and was in favor of community education on the subject.

Sinn said she was encouraged by the interest that was shown even before the first class, which reached its cap of 25 attendees.

“I know from the people that I’ve spoken to on the phone that people do want to know how to talk about this,” she said. “They want the language, they want to understand the plant itself, they want to understand what they’re legally allowed to do right now in Santa Barbara County and in Lompoc itself, and those are some of the questions that we want to answer.”

Dulcie Sinn is already booking attendees for the next two classes May 6 and June 3 at the Anderson Recreation Center in Lompoc.

Those sessions, scheduled for 6 to 8 p.m., will follow much of the same format of Monday’s opener, though the discussion may veer in different directions depending on the questions that come up.

The cost for each of the sessions is $21.50 per person. Sign-ups are open under the "shop" tab at www.chachacookingclub.com.

More information can be obtained by contacting Sinn at chachacookingclub@gmail.com or at 805-451-3414.

At least two more cannabis operations are slated to open in Lompoc this year, including the city’s second retail dispensary and what could be …

Lompoc — and Santa Barbara County for that matter — has officially entered the retail cannabis market.

The impacts that commercial cannabis in Lompoc will have on public safety, the local business community and the local economy were among a ran…

In a move that could expedite the opening of cannabis businesses in Lompoc, the Lompoc City Council voted unanimously Monday night to allow ci…

For the second time in as many years, the Lompoc City Council on Tuesday night voted against introducing a potential new tax measure as a way …

Cannabis cultivation would be banned on certain parcels zoned AG-1 under one possible ordinance amendment but would be allowed on those parcels with a conditional use permit under another possible amendment proposed Wednesday by the Santa Barbara County Planning Commission.

A new recreational cannabis dispensary opened its doors in Lompoc on Friday, becoming the second such business in both the city and all of Santa Barbara County. The Ocean Hye Club, at 1017 E. Ocean Ave., celebrated its first day of operation on Friday morning with plans on hosting a much larger grand opening event on Saturday. Although the shop was not yet fully decorated or stocked, several customers were on hand to check out the new business in its first hour of operation.

Wine & Wisdom, an ongoing series created by the Cha Cha Cooking Club, will again pair local wine and food with a scintillating discussion …

Dulcie Sinn, founder of the Cha Cha Cooking Club, leads a class on home-grown cannabis for medical and recreational adult use on Monday at the Anderson Recreation Center in Lompoc. She is holding an ad that appeared in The New Yorker magazine.

Dulcie Sinn shows reference materials, including a pamphlet on a cannabis festival in Spain, on Monday at the Anderson Recreation Center in Lompoc.

Dulcie Sinn, founder of the Cha Cha Cooking Club, leads a class on home-grown cannabis for medical and recreational adult use on Monday at the Anderson Recreation Center in Lompoc.

Dulcie Sinn, founder of the Cha Cha Cooking Club, prepares materials for her class on home-grown cannabis for medical and recreational adult use on Monday at the Anderson Recreation Center in Lompoc.