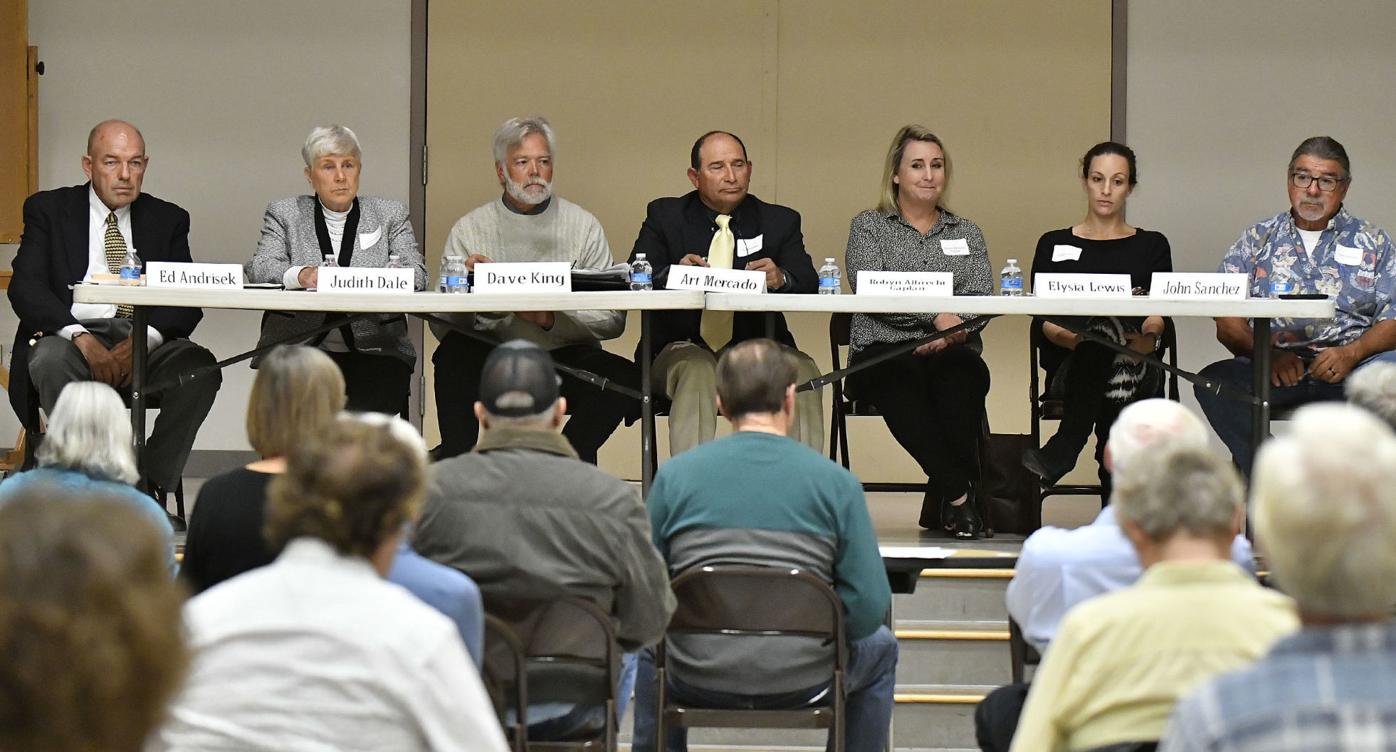 Candidates for two four-year seats on the Buellton City Council are, from left, inclumbent Ed Andrisek, challenger Judith Dale, and incumbents Dave King and Art Mercado. The candidate who finishes third in the Nov. 6 General Election will fill a two-year seat.

Candidates for a currently vacant two-year seat on the Buellton City Council are, from left, Robyn Albrecht Caplan, Elysia Lewis and John Sanchez.

Candidates for two four-year seats on the Buellton City Council are, from left, inclumbent Ed Andrisek, challenger Judith Dale, and incumbents Dave King and Art Mercado. The candidate who finishes third in the Nov. 6 General Election will fill a two-year seat.

Candidates for a currently vacant two-year seat on the Buellton City Council are, from left, Robyn Albrecht Caplan, Elysia Lewis and John Sanchez.

Buellton City Council candidates believe they can contribute to the future of the city, but candidates’ answers to a series of questions at a Wednesday night forum showed little variation in how they would do that.

All seven candidates for four council seats attended the forum sponsored by WE Watch and the Santa Ynez Valley News in the Oak Valley Elementary School multipurpose room, with about 30 citizens in the audience.

Incumbent Ed Adrisek, challenger Judith Dale, incumbents Dave King and Art Mercado, and challengers Robyn Albrecht Caplan, Elysia Lewis and John Sanchez responded to four questions developed by WE Watch and the SYV News and given to them in advance.

Andrisek, Dale, King and Mercado are running for two four-year seats on the council. The one who receives the third-most votes in the Nov. 6 General Election will fill a seat with two years remaining on the term.

Mayor Holly Sierra was unopposed in her bid for re-election and will automatically retain her seat, so she did not participate in the forum.

After a break, the candidates answered three questions assembled from those submitted in writing by the public. Finally, each candidate was given one minute to sum up why people should vote for them.

The first question asked whether candidates support the Avenue of Flags Specific Plan guidelines calling for the area to be economically vibrant, community-oriented and pedestrian-friendly and, if so, what they would do to move the project forward and, if not, why.

Andrisek said he has no problem with the specific plan but noted the city still doesn’t have an investor.

“Until someone comes in and builds … I think we’ve got the cart before the horse,” he said, adding he would withhold judgment until a specific investor comes in.

Dale said she agrees with the guidelines.

“The problem with a specific plan on the Avenue is that it consists of many, many tiny lots owned by different people,” she said. “Without the property owners buying in … it’s not going anywhere.”

She said the city’s economic development task force should be expanded to get all aspects of the city working together to develop an economic plan for all of Buellton.

King said two of the avenue’s property owners at Second Street are planning projects that will promote the specific plan’s guidelines.

He said the city can provide incentives like tax breaks to get existing property owners to upgrade their buildings to fit in with the plan.

Mercado said he is in favor of the specific plan, but the city can’t force owners to upgrade their properties.

“You have to have a reason for people to come downtown,” he said, adding that new businesses and property improvements will encourage others to upgrade their buildings. “You have to make a reason for visitors to spend two or three days here.”

Caplan said improvements the city has already made on Avenue of Flags are wonderful, but she said refining the plan is an ongoing process.

“I think working with the Planning Commission to complete (the specific plan) is a must,” she said, adding the Avenue can become “something Buellton residents take pride in.”

Lewis said there’s only so much council members can do.

“We can support and encourage (projects) to be brought before the council,” she said, adding that without buy-in from the community, the plan won’t succeed.

Sanchez said more events and activities like a farmers market and car shows are needed to give the Avenue exposure.

“We’re not going to know exactly what’s going to happen until somebody shows up with an offer,” he said. “Somebody will come in with something big and we’re going to like it or not.”

Another question noted traffic passing through the city on highways 246 and 101 and the building boom Buellton is experiencing and asked how candidates would improve traffic flow in the short and long terms, including large truck traffic and parking.

Dale said traffic is really only bad from about 4:30 to 6 p.m. but otherwise is “pretty good.”

But she suggested adding a traffic signal on Highway 246 at Ballard Canyon Road to slow traffic coming from Solvang to make it easier for motorists to pull out of the shopping centers between there and Highway 101.

She also said McMurray Road should be widened at its intersection with Highway 246 and the city should consider annexing the old dairy property near the Santa Rosa Road exit from Highway 101 to create a truck stop.

“We don’t want to lose truckers’ business, and they like to stay overnight in Buellton,” she said.

King said there are ways to mitigate traffic on Highway 246, including constructing a new road on the other side of the Santa Ynez River that would allow through traffic to bypass Buellton and Solvang, although he admitted that would have to be a county project.

“As far as in-town traffic, we have to go to Caltrans to have them look at the timing of the traffic lights,” he said. “They need to be sync’ed. We need a flow through town.”

He noted the old dairy property is outside the city limits, and the city has an urban growth boundary that would prevent its annexation.

Mercado agreed about approaching Caltrans about the flow of traffic.

“There’s new technology out there,” he said, adding Caltrans could install “sensors from Ballard Canyon all the way through town to regulate traffic.

He also said the city doesn’t want to lose the big-rigs he said are “core here in the Valley,” but he added the city must be realistic about what it can do.

“Synchronizing the lights is one thing I hear from residents we should be doing,” she said, adding the city has to come up with parking for big trucks.

Lewis said part of the problem is that it takes so long for people to go from one shopping center to the next east of Highway 101 without having to pull out onto Highway 246.

“Until recently, there was no way to go from Burger King to Albertsons” without pulling out onto the highway, she said. “We need to make traffic on the sides more fluid.”

“As for trucks, what comes to mind is the property behind Albertsons” and next to the Chumash Resource Center the city could use for parking.

Sanchez opposed adding another stop for traffic coming from Solvang, but he believes Caltrans has all the equipment needed to smooth out traffic flow.

“We need to let them know what we’d like to see,” he said. “Everybody’s just got to take it slow and easy.”

Andrisek said the city needs to create a parking district in the median areas to share overflow parking with developments and was critical of the Avenue of Flags traffic lanes.

“It’s a horrible design. We need to return to two lanes on each side,” he said, adding that cyclists “aren’t using all the real estate we’ve set out for them.”

The presubmitted questions included how to ensure water and wastewater systems are maintained while fully funding the services and how transient occupancy tax revenues can best be used to benefit the quality of life and how much should be allocated to promoting the city.

Audience questions involved how to make Buellton the Valley’s entertainment center and prevent the city from becoming a line of chain stores, if there was any possibility of creating a park on the east side of Highway 101 and whether candidates supported Measure A, the parcel tax proposed by Buellton Union School District.

To hear them answer all the questions, see the video of the forum posted at www.syvnews.com and www.santamariatimes.com.