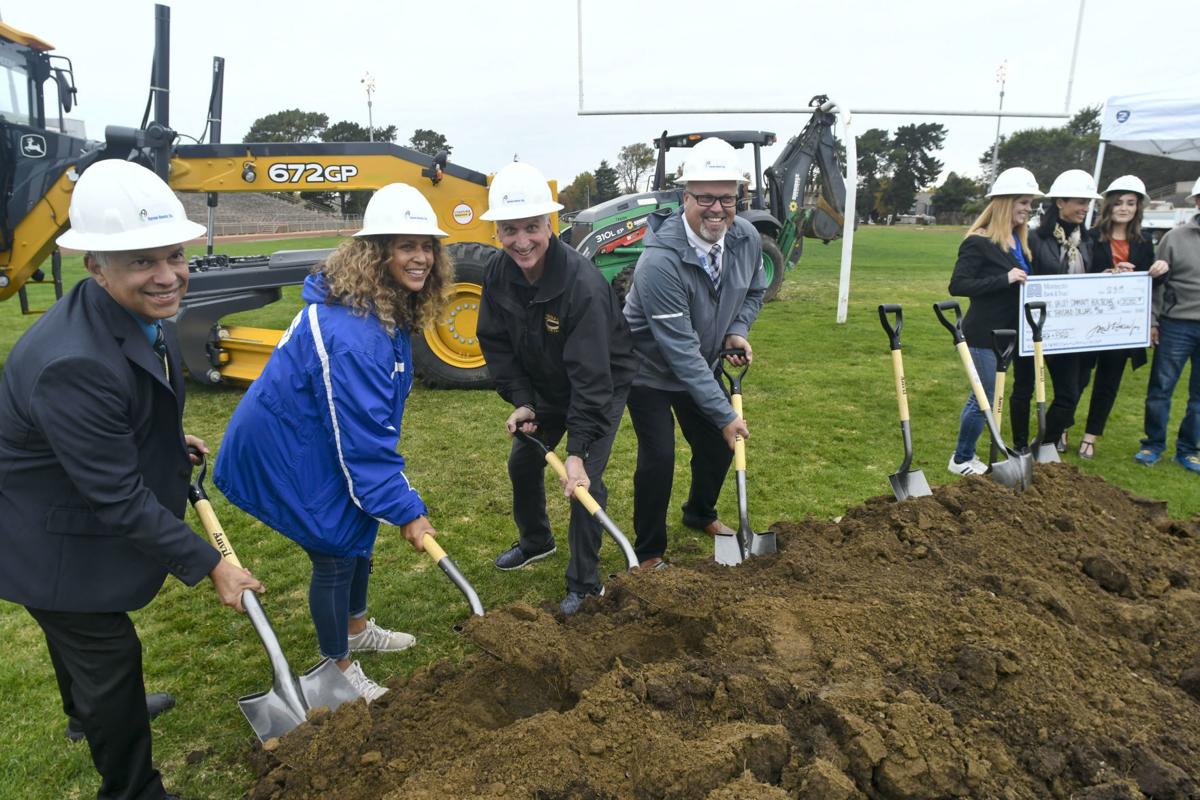 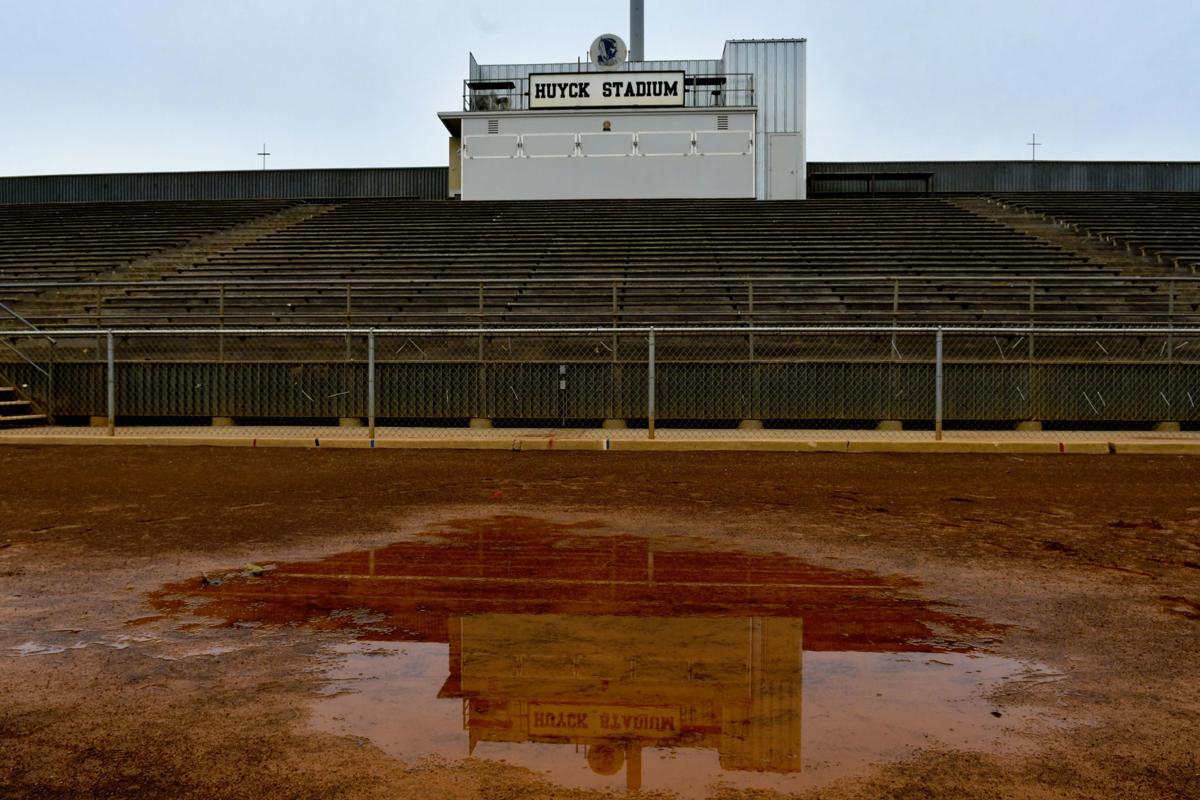 A puddle on the existing clay track reflects the press box during a groundbreaking ceremony Tuesday for a new artificial turf field and all-weather track at Huyck Stadium in Lompoc. 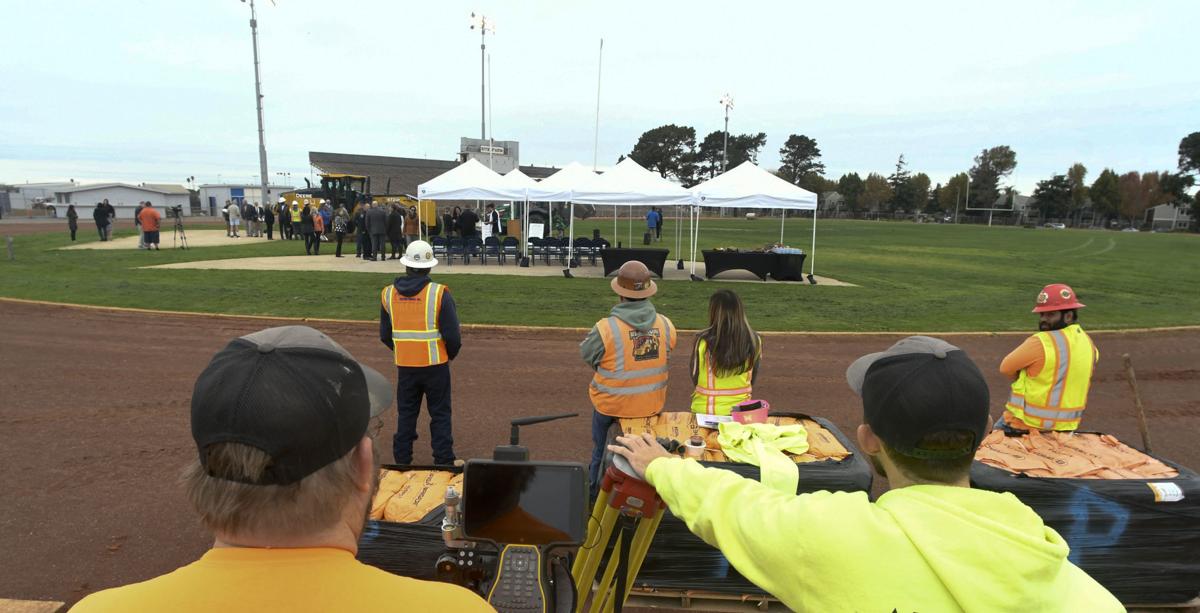 Workers wait for a groundbreaking ceremony Tuesday to end so they can start building a new artificial turf field and all-weather track at Huyck Stadium in Lompoc.

McDonald, who is superintendent of Lompoc Unified School District, said he was approached by a resident after that February 2017 announcement and told, “This isn’t gonna happen; these people can’t get organized.”

McDonald made the comments while standing on the soon-to-be-replaced natural grass at Huyck Stadium, and he wasn’t the only speaker in a celebratory mood.

Several local school and civic leaders, as well as representatives of various organizations that contributed to the fundraising effort, gathered at the stadium for a groundbreaking ceremony that was followed by actual construction work. Project leaders are targeting May 2020 for completion of what is expected to be the most extensive makeover in the 56-year history of the stadium.

Ashley Costa, executive director of the Lompoc Valley Community Healthcare Organization, said she felt it was appropriate that Tuesday’s ceremony fell “during the season of celebrations.”

Costa, who initially proposed the project and served on the Campaign for the Lompoc Community Track and Field fundraising committee, called the groundbreaking an “important moment in Lompoc’s history.”

The first phase of the project will consist of converting the natural grass field at the stadium to synthetic turf, switching the track from its loose red clay — which was in poor condition Tuesday after more than a week of steady rain — to a synthetic polyurethane “all-weather” surface, and reconfiguring the track to the modern accepted standard of 400 meters with nine lanes.

The renovations could cost as much as $3.8 million, with LUSD and the private Campaign for the Lompoc Community Track and Field splitting the costs.

Costa noted Tuesday that the campaign had raised $1.6 million, with $300,000 of that coming from people and organizations in Lompoc.

Ginger Salazar, a Lompoc High School alumna and campaign fundraising volunteer, also thanked those outside of Lompoc who contributed $1.3 million. Much of that, she said, came from organizations, foundations and private donors in South County, as well as a $450,000 donation from the Santa Ynez Band of Chumash Indians.

“While we may have different ZIP codes, we are all part of one larger community,” she said.

That sentiment was shared by leaders of the athletic departments at Lompoc and Cabrillo high schools. Although the stadium is located at Lompoc High School, the schools share the venue for some sports, including football.

At its Tuesday night meeting, the Lompoc Unified School District board of education voted 5-0 to approve an agreement with Byrom-Davey, Inc., to serve as the lead contractor for the first phase of what is set to be the most significant upgrade in the history of 56-year-old Huyck Stadium.

“We are united in this,” West said of his relationship with Terrones.

“I don’t care if it’s at Lompoc High School or [considered] ‘Lompoc's Stadium,’” he added. “It’s not about that. This is what’s best for kids, and I’m so about that.”

While construction continues throughout the 2020 high school spring sports season, the Lompoc High track and field teams will practice on other fields on campus and around the city, Terrones said. The team will not host any meets next spring.

Lompoc Mayor Jenelle Osborne, who attended the ceremony with City Manager Jim Throop, said the city is planning to take an active role in helping with after-hours security at the stadium once the renovation is complete. She also noted Lompoc's recreation division will have discussions with LUSD leaders about a possible use of the site for city recreation programs.

“I’m looking forward to it myself, because I don’t live too far from here,” Osborne said of the project. “If it’s after dark, I often choose to not get my exercise in because not all of my path is well-lit. So, I think [this project] is an opportunity to embrace getting healthy and having a safe environment to do it, but also to support the youth in our community with opportunities that they otherwise might not have.”

The Campaign for the Lompoc Community Track and Field, which is raising funds for the Huyck Stadium renovation, has set a deadline of Thursday, Jan. 2, for community members and organizations to purchase engraved bricks for the stadium's Community Donor Walkway.

The bricks can be used to memorialize or commemorate a family, athlete, business, or loved one. The engraved bricks are set to make up part of the walkway in the updated Huyck Stadium entrance.

To purchase a brick, which are being advertised as potential holiday gifts, or to learn more about the campaign, visit lompoctrackandfield.com.

The Solvang School District and People Helping People (PHP) have recently teamed up to mobilize a "Weekend FoodPacks” distribution program with the objective of keeping little tummies full through the weekends.

No Lompoc fireworks show in 2020; city to begin accepting applications for safe-and-sane permits

Lompoc will not host a public fireworks show this year, a city spokeswoman announced Monday, but the city will begin accepting applications Wednesday, Jan. 15, for the lottery to sell the so-called safe-and-sane fireworks this summer.

Workers with the Lompoc-based R.L. Johnson Construction have begun preparations for the installation of a new nine-lane track and synthetic turf field at Huyck Stadium. Leaders within Lompoc Unified School District are touting the next phase as “the epitome of a community supporting its own.”

A puddle on the existing clay track reflects the press box during a groundbreaking ceremony Tuesday for a new artificial turf field and all-weather track at Huyck Stadium in Lompoc. 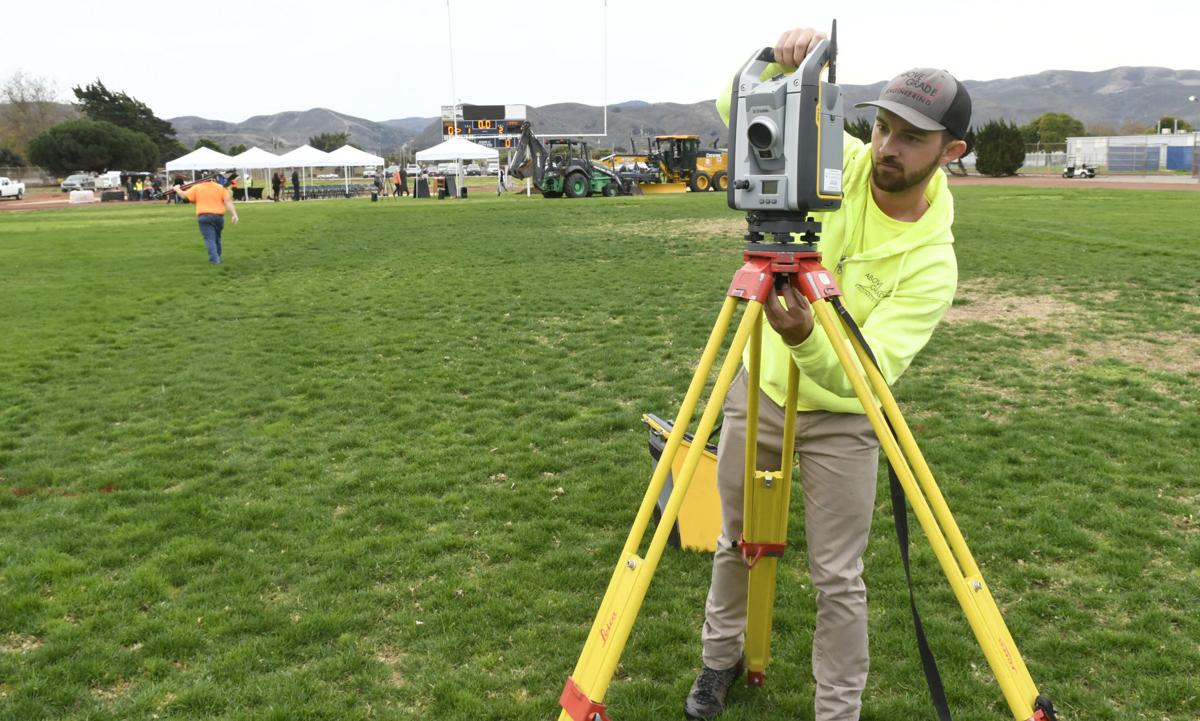 Kyle Beile, of Above Grade Engineering, sets up surveying equipment after a groundbreaking ceremony Tuesday for a new artificial turf field and all-weather track at Huyck Stadium in Lompoc. 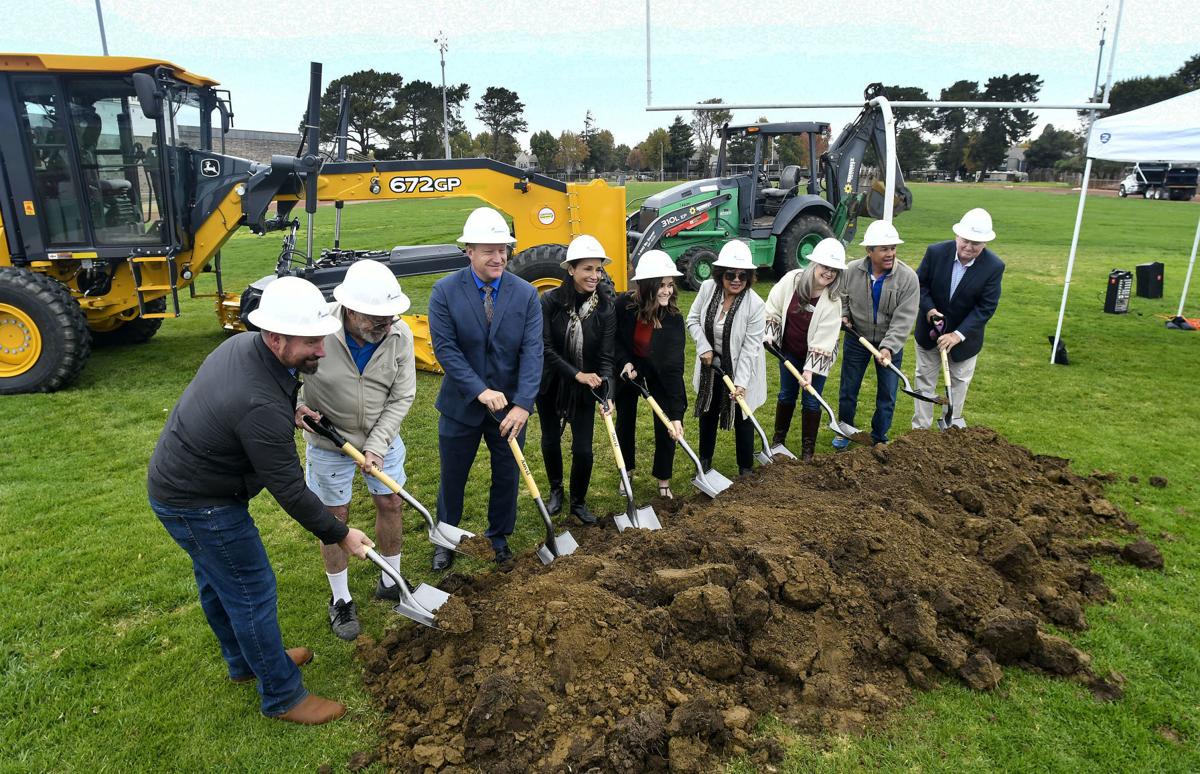 Workers wait for a groundbreaking ceremony Tuesday to end so they can start building a new artificial turf field and all-weather track at Huyck Stadium in Lompoc.